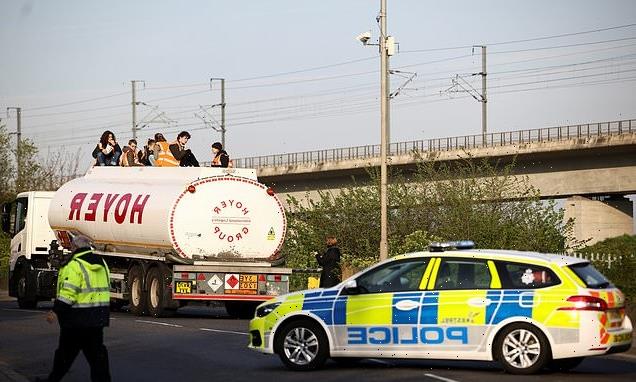 Just Stop Oil activist, 64, is fined as she becomes first protestor to be convicted over oil terminal protests that sparked fuel shortages

A 64-year-old woman has become the first protestor to be convicted for her involvement in the wave of protests at fuel sites staged by activist group Just Stop Oil that sparked shortages at forecourts.

Catherine Maclean admitted aggravated trespass after the Navigator Terminal in Thurrock, Essex was blockaded and the group claimed it brought production to a halt.

Maclean, of Hurstpierpoint, Hassocks, in West Sussex, was ordered to pay £409 in fines and costs at Chelmsford Magistrates’ Court on Saturday, Essex Police said.

Just Stop Oil launched a series of blockades of fuel terminals in southeast England and the Midlands since April 1 in a bid to force the Government to cut reliance on the fossil fuel.

This means they can be swiftly arrested for causing damage or chaining themselves to vehicles or objects on said sites and their access roads. 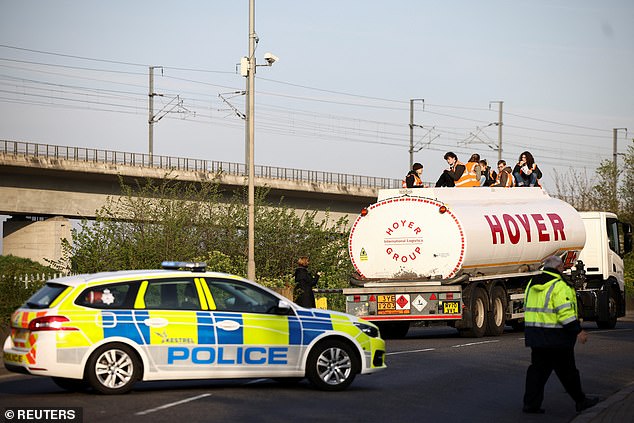 Catherine Maclean was charged with aggravated trespass after an incident at an oil terminal in Thurrock last Wednesday. Pictured: A police officer walks nearby as activists from Just Stop Oil sit on top of a fuel tanker during a protest in Grays on Good Friday

Maclean admitted her trespass after the protests in Essex on Wednesday, April 13 which focused on the Purfleet Oil Terminal, the Inter Terminal in Grays and the Navigator Terminal in Thurrock.

Just Stop Oil said they hoped the blockades would ‘significantly impact fuel availability at petrol pumps across the South East’.

‘No-one – least of all my officers – wants to see this happen but it is a timely reminder that if you come to Essex to engage in trespass, even though you may see it as protest, you will be arrested, you will be charged and that is likely to lead to a criminal conviction.

‘We are not anti-protest in any way. Individuals have a protected right to protest but these incidents have unfortunately crossed into criminality and we have been left with no other option but to act and seek authorisation from the Crown Prosecution Service to charge people.’ 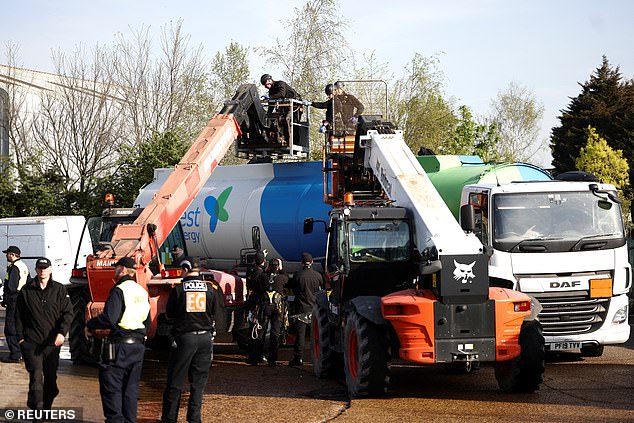 Maclean, of Hurstpierpoint, Hassocks, in West Sussex, was ordered to pay £409 in fines and costs after admitting the offence at Chelmsford Magistrates’ Court on Saturday, Essex Police said. Pictured: Police officers remove a demonstrator sitting on top of a fuel tanker as activists from Just Stop Oil block an entrance to a fuel terminal, during a protest in Grays on April 15

Both denied a charge of aggravated trespass and breach of bail conditions, Essex Police said, and were remanded into custody and will appear back at Chelmsford Magistrates’ Court next week.

So far, 23 people have been charged in connection with the disruption around Thurrock since the beginning of April, Essex Police said, and it has made 461 arrests.

This has caused over £1million to be spent by the force on policing the protests and a huge strain on local law enforcement.

A number of key operators including Navigator Thames, ExxonMobil and Valero gained their injunctions in the last few days, the Department for Business, Energy and Industrial Strategy (BEIS) said on Friday.

Valero Energy had obtained a High Court injunction against a number of environmental groups and ‘persons unknown’ earlier this week following recent protests at the Kingsbury terminal.

It bans anyone from damaging any part of the land at each of the firm’s sites, from ‘affixing themselves to any other person or object’ on the land or parts of access roads, and from building any structure.