London: The extradition hearing for Julian Assange will resume at London's Old Bailey on Monday, after a coronavirus scare shut down proceedings last week.

The latest drama in the ongoing saga surrounding the Australian began on Wednesday, when the wife of a barrister representing the US government developed symptoms that were feared to be signs of a COVID-19 infection. 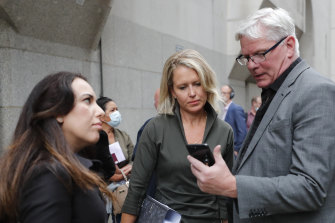 James Lewis, the QC representing the US government, did not appear in the courtroom the next morning but instead by video link from his London flat.

Both sides requested a complete halt to the proceedings while tests were carried out.

District Judge Vanessa Baraitser reluctantly agreed, indicating that she would have preferred to resume the hearing on Friday and make another decision then.

Earlier in the week she refused a request from Assange's legal team to delay the hearing until after the US presidential election. Assange's team has presented a witness to the court, a peace expert, who claims Donald Trump is pursuing Assange, in part because his predecessor, Barack Obama, did not.

On Friday, test results revealed the fears that COVID could sweep through the courtroom were misplaced, with the infection turning out to be that of the common cold.

Assange is resisting extradition to the US. The Department of Justice says his actions in conspiring with former army intelligence officer Chelsea Manning to steal more than half a million classified documents relating to the Iraq and Afghan wars were not journalism but crimes of hacking and theft under the Espionage Act.

He faces 18 charges that carry a combined maximum sentence of 175 years.

Assange says he is a journalist and that his actions, in publishing the unredacted documents that included the names of human intelligence sources who were helping the US and its allies fight the Taliban, are protected by the First Amendment.

Under Britain's Extradition Act, a judge can refuse the US extradition request if it can be demonstrated that the accused's human rights would be infringed.

It is the second extradition that Assange has fought. In 2012, a British judge ruled that he be extradited to Sweden to face sexual assault allegations.

Assange promptly sought refuge at the Ecuadorian embassy, where he remained until his hosts withdrew his asylum in 2019, leading to his dramatic arrest in broad daylight.

He is currently being held in Belmarsh Prison, a category A jail on the outskirts of London where men convicted of terrorism offences are held.

The 49-year-old has attended every day of his hearing, which resumed last Monday, and sits behind a glass window in the dock.