The former Labor prime minister will speak on a panel to discuss international aid and education, in her capacity as chair of the Global Partnership for Education. 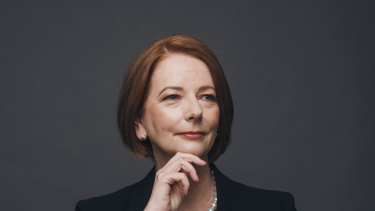 Julia Gillard will speak at a Conservative Party conference in Manchester.Credit:James Brickwood

Labour members planned a major "Shut Down the Tories" rally in Manchester as speculation mounted the recall of Parliament, triggered by last week's court ruling that Johnson unlawfully shut down Parliament, could see the event abandoned by key MPs now required in the Commons where Johnson has a majority of minus 40.

Johnson arrived in Manchester arm-in-arm with his 31-year old girlfriend Carrie Symonds, but his prior relationship with another blonde is in focus.

The Times on Sunday reported that Jennifer Arcuri was given $228,946 in public money and privileged access to three foreign trade missions led by Johnson while he was mayor. It said Acuri told four friends that she was having an affair with the then London mayor.

Johnson denies any impropriety and Downing Street declined to comment on the revelations.

"Am normally opposed to private life Qs of politicians on TV but given financial and other advantages given by a public official to Ms Arcuri the direct question of Boris Johnson ‘have you ever had sex with her?’ is a legitimate one," he wrote on Twitter.

"If not asked it’s another fail for journalism."

The newspaper's columnist Charlotte Edwards also published an account of a lunch she had with Johnson in late 1990s or early 2000s when Boris Johnson squeezed her thigh under the table during their lunch, when she was a reporter for The Spectator.

"Under the table, I feel Johnson’s hand on my thigh. He gives it a squeeze. His hand is high up my leg and he has enough inner flesh beneath his fingers to make me sit suddenly upright," Edwards said.

She said the woman seated on Johnson's other side experienced the exact same thing. "We speculate: were the squeezes simultaneous? For balance? Was he hedging? 'And did you notice how he kept referring to his "current" wife?' she says. I did. We grimace. My memory is that he had a 'reputation'. Still, the 'double squeeze' — quite a signature move."

Two former ministers, Damian Green and Michael Fallon, lost their posts when similar allegations were made against them in 2017 at the height of the MeToo movement.

The government will use the conference as a launch-pad for the election it desperately wants but is being denied by the Commons, as well the chance to restate its intention to leave the EU on October 31 regardless of the Parliament's recently-passed law to block a hard exit.

Foreign Secretary Dominic Raab told the Mail on Sunday: "I think the cabinet is united and I think you've got a Prime Minister who has just got this fizz of optimism coupled with a steely resolve that we are going to get this done."