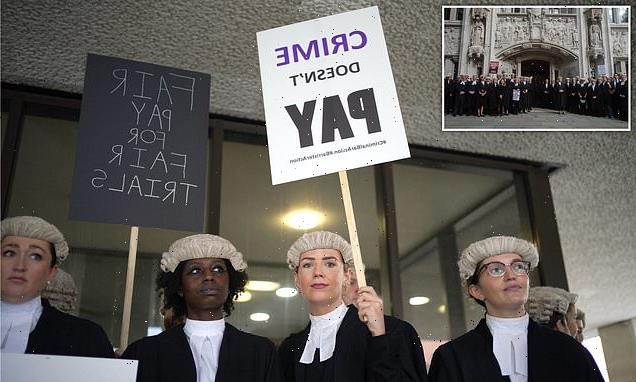 Judges were ‘wrong’ to bail three defendants due to the unavailability of defence barristers who were taking part in strike action, High Court told

Two judges were ‘wrong’ to bail three defendants awaiting trial due to the unavailability of defence barristers who were taking part in strike action, the High Court has heard.

Judges in two separate criminal cases in Bristol and Manchester refused to extend the custody time limit of three defendants who were being kept behind bars pending the start of their respective trials.

They concluded that the unavailability of defence barristers due to ongoing industrial action by members of the Criminal Bar Association (CBA) was not a ‘good and sufficient cause’ to keep the suspects locked up on remand.

But the Director of Public Prosecutions (DPP) Max Hill KC is challenging the decisions at the High Court, arguing that the rulings were ‘unlawful’ and should be quashed.

Tom Little KC, representing the DPP, today told a hearing in London that it is ‘inappropriate for applications for extensions to custody time limits to be determined based on the individual views of judges as to the competing arguments in the dispute’.

He said: ‘While it is invidious for any view at all to be expressed on the merits of the industrial action, the prospect that judges will reach different conclusions on the issue is one which will lead to inconsistent and unfair results.’

It comes as hearings across England and Wales in recent weeks have been adjourned due to the unavailability of barristers striking due to a row over pay and conditions.

The CBA is demanding a 25 per cent pay rise in legal aid fees to curb an exodus of young barristers – but the Government has refused to negotiate on its 15 per cent offer. 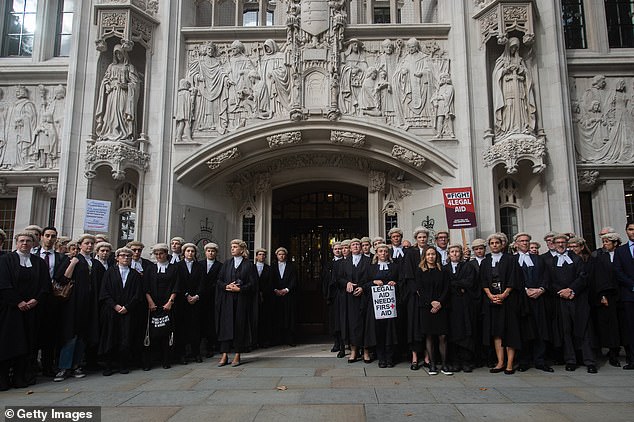 Judge Peter Blair KC, sitting at Bristol Crown Court, earlier this month ruled that the absence of a lawyer arose out of the ‘chronic and predictable consequences of long term underfunding’.

He also highlighted that the Government had ‘many, many months’ to resolve the pay dispute.

The judge added: ‘On the one hand the state demands trials to commence within an applicable custody time limit, and on the other it holds the purse strings for remunerating those who are required under our rule of law to be provided with advocacy services.’

Meanwhile, Mr Little today argued that Tina Landale, another judge who reached the same view in a criminal case in Manchester, had placed ‘tacit reliance’ on Judge Blair’s earlier ruling,

He said her judgment’s wording being ‘either identical or similar’.

Mr Little the court that ‘properly analysed these two respective decisions involved a view being expressed as to fault’, adding: ‘In other words this is the Government’s fault.’

He continued: ‘The judges formed a view which they expressed in the course of their ruling which was one we submit should not have been formed.’

Mr Little also claimed there had been a ‘total failure to engage with a bespoke case-specific approach to the facts before the judge’.

Mr Little said the DPP was not making arguments about the ‘merits’ of the pay dispute, but was seeking ‘clarity and some certainty’ with the legal challenge.

Mr Hill, meanwhile, has previously described the issues raised by the cases at the centre of his challenge as ‘a matter of the greatest importance to the running of the criminal justice system in the next few weeks’. 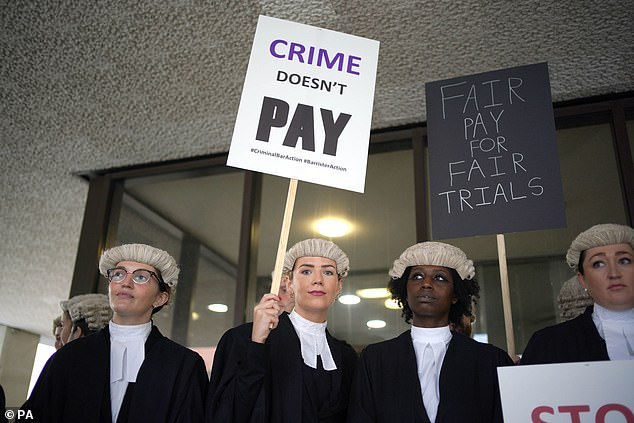 Criminal barristers from the Criminal Bar Association (CBA), which represents barristers in England and Wales, outside Manchester Crown Court on the first of several days of court walkouts earlier this year

The court heard from Mr Little that it had ‘simply not been possible’ to bring a challenge over other court decisions, but argued that criticism over the Manchester and Bristol rulings had ‘a general application to the correct approach that should be taken in other cases’.

In written submissions, Mr Little said the DPP ‘takes no position on the adequacy or otherwise of remuneration of those carrying out defence legal aid work’.

He added: ‘It is submitted that the judges in both cases appeared to take a clear position on the dispute, and that to do so was both wrong in principle and unnecessary to their decisions whether the custody time limits should be extended.’

When an accused person appears at a crown court, the custody time limit until the start of their trial is 182 days or around six months and can only be extended if certain stipulations are met – including that there is a ‘good and sufficient cause’ to do so.

David Hughes, representing the Bristol defendant – listed as an interested party to along with the two defendants in the Manchester case – said Judge Blair had said “nothing… that was wrong, improper or inaccurate’ and had made ‘no error of law’.

Mr Hughes said Judge Blair was not expressing a view but ‘just expressing what the reality of the situation is’, including that the dispute has been going on for many months.

He also highlighted the fact there was a backlog in the criminal justice system before Covid restrictions, which exacerbated it, and said the circumstances were ‘predictable’.

Mr Hughes added: ‘This was a well-known problem that was going to occur, not only in this case, but in courts all over England and Wales very widely.’

Benjamin Knight, representing one of the Manchester defendants, said in written submissions that Judge Landale ‘did not stray into assessing the merits of the CBA action’, but had noted it was ‘foreseen and foreseeable… that such a problem would arise’.

Barry Grennan, representing the other Manchester defendant, told the court judges faced making decisions over cases that had ‘absolutely no chance whatsoever of being heard within the custody time limits’ and argued that the barrister pay dispute had become a ‘predictable and persistent problem’ that dated back to April.

He argued: ‘The idea this was a sudden and unforeseen action… is highly misleading.’

Mr Grennan also said it was clear before the judges’ rulings that the majority of the criminal bar was to withdraw their services and the Government therefore knew by that point that “unless something was done … the courts were essentially looking at potential standstill”, as well as a “rapid increase” in the backlog.

He said defendants in the Manchester case could have faced up to 10 months in custody before their trial was heard.