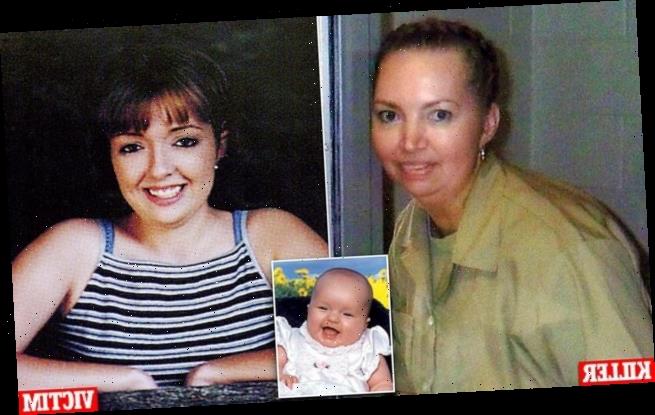 Judge reinstates execution of federal death row’s only female inmate: Murderer who strangled woman to death and cut her baby from her womb will be put to death on January 12

A federal appeals court has cleared the way for the only woman on federal death row to be executed before President-elect Joe Biden takes office.

The ruling, handed down Friday by a three-judge panel on the U.S. Court of Appeals for the District of Columbia Circuit, concluded that a lower court judge erred when he vacated Lisa Montgomery´s execution date in an order last week.

U.S. District Court Judge Randolph Moss had ruled the Justice Department unlawfully rescheduled Montgomery’s execution and he vacated an order from the director of the Bureau of Prisons scheduling her death for Jannuary 12.

Montgomery’s legal team are expected to file an appeal by Saturday, according to Fox News.

She was found guilty of federal kidnapping resulting in death and sentenced to death in 2007 for the slaying of mother-to-be Stinnett. She strangled her to death and cut her baby from her womb using a kitchen knife.

This undated file image provided by Attorneys for Lisa Montgomery shows Lisa Montgomery. A federal appeals court has lifted a judge’s order that had blocked the execution date for Montgomery, the only woman on federal death row 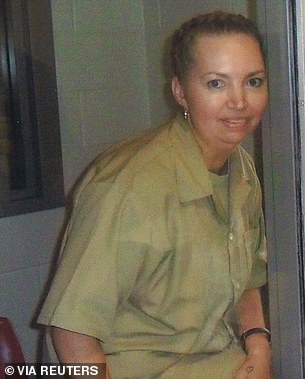 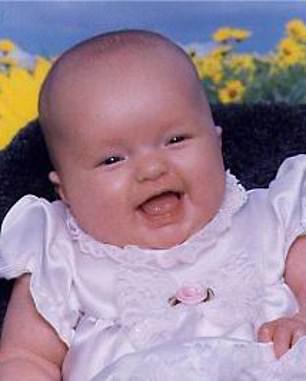 Lisa Montgomery (left) planned the brutal womb raid for months, and had lied to family members that she was full term.  Incredibly the baby, Victoria Jo Stinnett (right), survived the attack and is now 16 years old 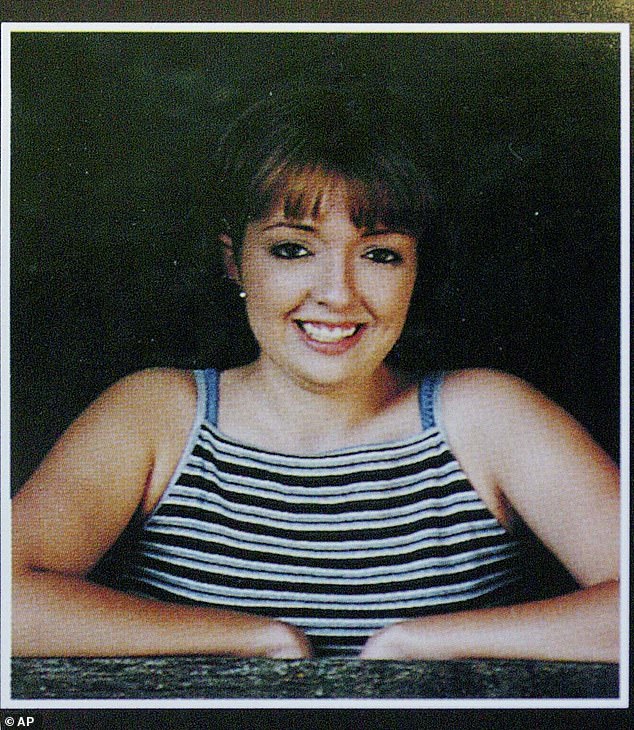 Bobbie Jo Stinnett is pictured above. Stinnett, 23, an eight-months-pregnant factory worker was slain in her Missouri home

Montgomery had been scheduled to be put to death at the Federal Correctional Complex in Terre Haute, Indiana, in December, but Moss delayed the execution after her attorneys contracted coronavirus visiting their client and asked him to extend the time to file a clemency petition.

Moss concluded that the under his order the Bureau of Prisons could not even reschedule Montgomery´s execution until at least Jan. 1. But the appeals panel disagreed.

Meaghan VerGow, an attorney for Montgomery, said her legal team would ask for the full appeals court to review the case and said Montgomery should not be executed on January 12.

Montgomery’s lawyers have argued that their client suffers from serious mental illnesses. Biden opposes the death penalty and his spokesman, TJ Ducklo, has said he would work to end its use. But Biden has not said whether he will halt federal executions after he takes office January 20.

Montgomery was found guilty of federal kidnapping resulting in death and sentenced to death in 2007 for the slaying of mother-to-be Stinnett.

Planning the heinous crime for months, she met her victim online under the pretense that she was interested in buying a puppy from her.

Montgomery posed as ‘Darlene Fischer’ and started chatting with Stinnett in the chatroom called ‘Ratter Chatter.’

She told her victim she was pregnant and the two women chatted in the room and over email about their pregnancies.

Stinnett was eight months’ pregnant while Montgomery was faking her pregnancy, telling her victim as well as her family and friends that she was full term.

On December 16, 2004, the two women arranged to meet at Stinnett’s home over the purchase of the puppy, a rat terrier.

Once inside, Montgomery strangled Stinnett with a neon pink rope until she lost consciousness.

When Montgomery sliced her stomach open with a knife, Stinnett regained consciousness and a struggled ensued.

Montgomery then strangled the pregnant woman again, killing her.

She then cut the baby girl from her victim’s womb and made off with the premature child, attempting to pass off the girl as her own 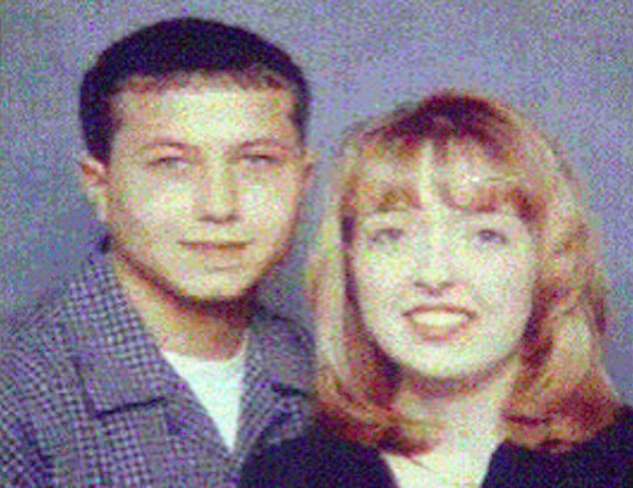 Bobbie Jo and Zeb Stinnett before her brutal murder in 2004 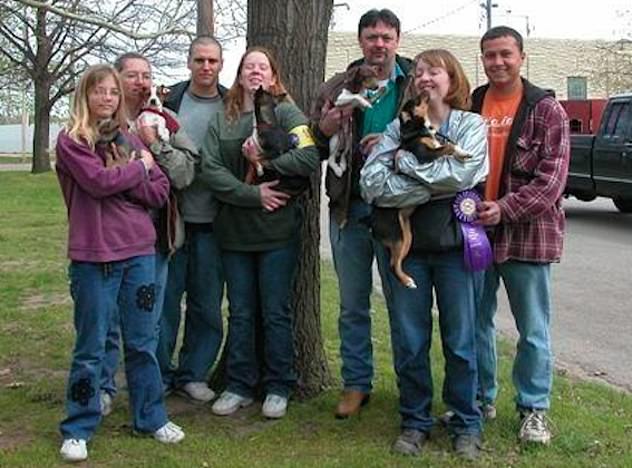 A group shot from the dog show in Abilene, Kansas. Lisa Montgomery (second from left), Bobbi Jo (second from right) and Zeb Stinnett (far right) pose with their dogs

Montgomery was arrested by police the following day at her farmhouse. The baby, who miraculously survived the ordeal, was returned to her father Zeb Stinnett.

In 2007, a US District Court for the Western District of Missouri sentenced Montgomery to death for the crimes.

During her trial, Montgomery’s defense argued the Kansas woman suffered from a delusional belief that she was pregnant, and said she may have been unable to differentiate between right and wrong when she killed Stinnett.

The defense team portrayed her as a victim of severe mental illness whose delusion of being pregnant was being threatened, causing her to enter a dreamlike state when the killing took place.

They also argued that she had post-traumatic stress disorder brought on by mental, physical and sexual abuse in her childhood.

They said Montgomery tried to pass off Stinnett’s baby as her own, telling her husband she had gone into labor while on a shopping trip and having him pick her up near a Topeka health centre where she said she gave birth. 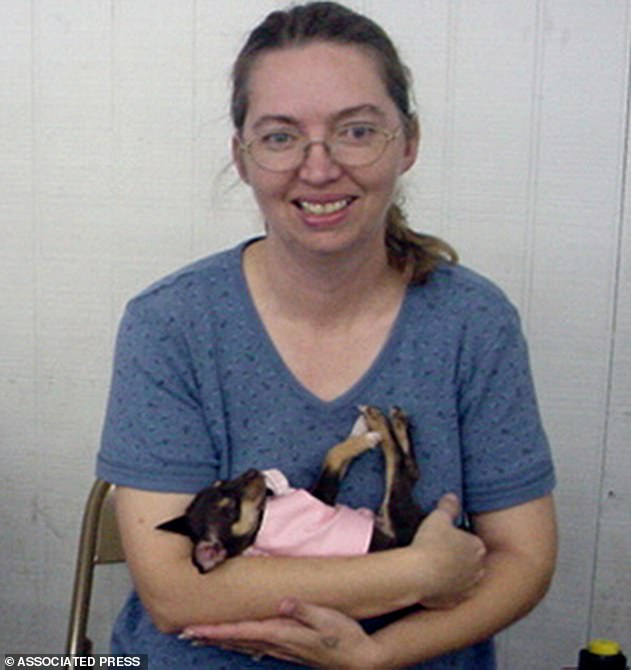 Montgomery, now 52, was convicted in 2007 of kidnapping and strangling Bobbie Jo Stinnett, who was eight months pregnant

Montgomery had undergone a tubal ligation in 1990 after the birth of her fourth child.

But soon after, she began falsely reporting a series of pregnancies. In 2004, she claimed to be due in mid-December.

Her husband, Carl Boman, had become suspicious of her latest pregnancy claim and threatened to use it against her as he sought custody of two of the couple’s four children. A custody hearing had been set for January 2005.

Montgomery’s mother and sister also had been telling Montgomery’s husband and his parents that it was impossible for her to carry a child.

Prosecutors said Montgomery removed the baby from Stinnett´s body, took the child with her, and attempted to pass the girl off as her own.

Montgomery’s legal team has argued that their client suffers from serious mental illnesses.

‘Given the severity of Mrs. Montgomery´s mental illness, the sexual and physical torture she endured throughout her life, and the connection between her trauma and the facts of her crime, we appeal to President Trump to grant her mercy, and commute her sentence to life imprisonment,’ one of Montgomery´s lawyers, Sandra Babcock, said in a statement.

Two other federal inmates are scheduled to be executed in January but have tested positive for coronavirus and their attorneys are also seeking delays to their executions.