Beirut: A Lebanese prosecutor filed charges on Tuesday, local time, against current and former customs officials over the massive blast at Beirut’s port in August, including a former customs chief who was reportedly the point man for the militant Hezbollah group at the facility. 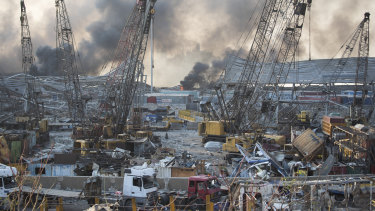 Aftermath of a massive explosion is seen in in Beirut, Lebanon in August.Credit:AP

Hazimeh was reportedly the point man for Hezbollah at the Port of Beirut when nearly 3000 tonnes of highly explosive fertiliser were stored there more than six years ago.

The 2,750 tonnes of ammonium nitrate blew up August 4, killing more than 200 people, injuring thousands and causing damage worth billions of dollars, mostly in nearby neighbourhoods.

Beirut's port is considered one of the most corrupt institutions in the country, where ruling political factions including Hezbollah have divvied up positions and created fiefdoms.

National News Agency said that in charging Shehadeh and Hazimeh, the number of those now charged in connection with the explosion reached 33, of whom 25 are under arrest. None of the charges have been made public and the process has been highly secretive. 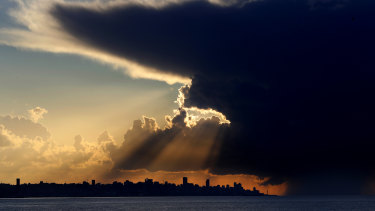 A cloud is shown at sunset over Beirut, Lebanon.Credit:AP

Riad Kobaissi, an investigative reporter with Al Jadeed TV, has followed corruption at the port and within the customs authorities since 2012. He said all the political factions in the country benefited from using the port as patronage, and most overlooked dubious dealings. He said many people knew of the initial warning about the danger of the stored ammonium nitrate in 2014 by a customs official. He said that includes Hazimeh, who Kobaissi described as Hezbollah’s former point man at the port.

NNA said the new cases were referred to Judge Fadi Sawwan, who is probing the blast. It said Sawwan had questioned the two earlier as witnesses but they will be questioned again as suspects.

The report comes amid complaints the investigation is moving too slowly. Families of the victims are desperate to know what triggered the blast, one of the largest non-nuclear explosions in history.