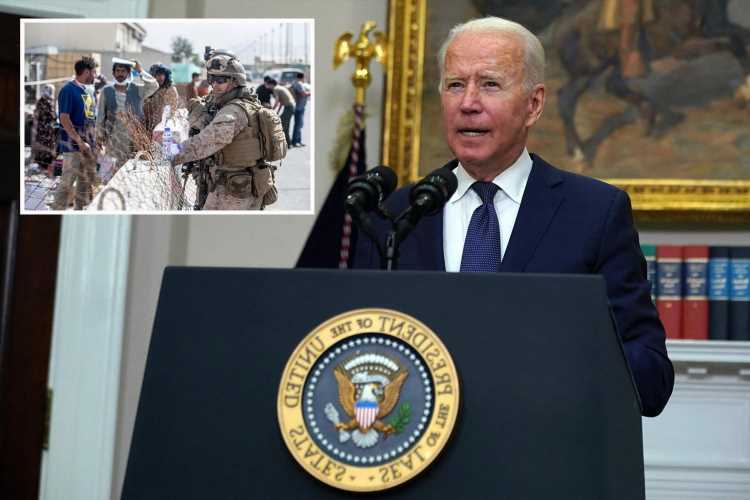 JOE Biden has once again insisted that pulling US troops out of Afghanistan was "the right decision" as he defended his handling of the crisis.

The President has suffered a huge wave of backlash after the Taliban quickly seized the war-torn country after 20 years of warfare. 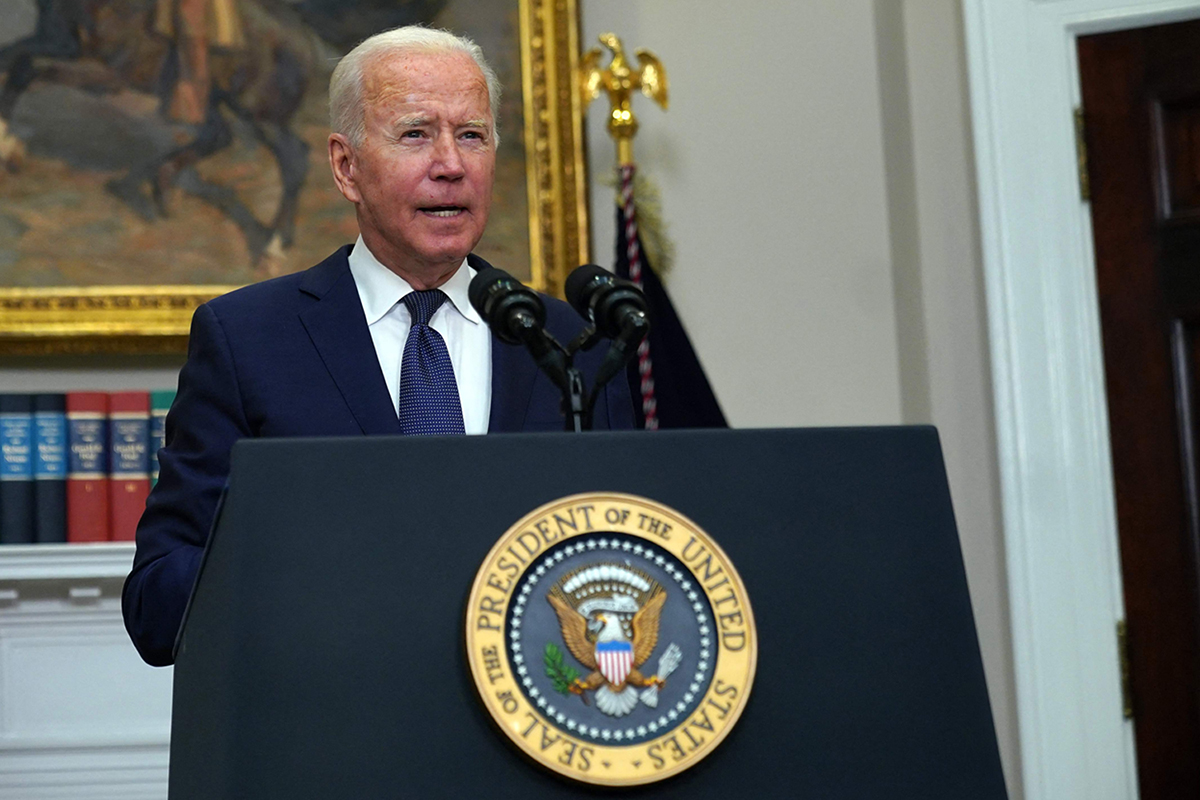 But despite widespread criticism, Biden said during a live address to the nation this afternoon that he is "convinced" he made the right move in withdrawing US troops.

"My job is to make judgments," he said.

"My job is to make judgments no one else can or will make. I made them.

"I am convinced I am absolutely correct in not deciding to send more women and men to war, for a war that in fact is no longer warranted.

"This was the logical, rational and right decision to make."

With thousands of Americans and Afghan refugees still stranded in Kabul following the Taliban's takeover after the President ordered US troops to leave Afghanistan, Biden met with members of his national security team to discuss the situation today ahead of the address.

According to the White House, Biden, Secretary of State Antony Blinken, Defense Secretary Lloyd Austin and other members talked out "the security situation and counterterrorism operations".

It comes as the US military considers “creative ways” to get Americans and others into the Kabul airport for evacuation from Afghanistan amid “acute” security threats, Biden administration officials said.

The Pentagon on Sunday ordered six US commercial airlines to help move evacuees from temporary sites outside of Afghanistan.

At the one-week mark since the Taliban completed its takeover of the country, the US-directed airlift from Kabul continued today even as US officials expressed growing concern about the threat from the Islamic State group.

That worry comes on top of obstacles to that mission from the Taliban, as well as US government bureaucratic problems.

Following today's update from the President, Afghanistan will be the chief topic of discussion when Biden and leaders of the Group of Seven industrialized nations meet virtually on Tuesday.

“The threat is real, it is acute, it is persistent and something we’re focused with every tool in our arsenal,” Biden’s national security adviser, Jake Sullivan, said.

Sullivan said on CNN’s “State of the Union” that 3,900 people had been airlifted out of Kabul on US military flights over the past 24 hours.

A US defense official, speaking on condition of anonymity to provide details not yet made public, said those people were flown on a total of 23 flights — 14 by C-17 transports and nine aboard C-130 cargo planes.

That represents an increase from 1,600 flown out aboard U.S. military planes in the previous 24 hours, but remains far below the 5,000 to 9,000 that the military says it has the capacity to airlift daily.

Sullivan also said about 3,900 people were airlifted on non-US military flights over the past 24 hours.

The Biden administration has given no firm estimate of the number of Americans seeking to leave Afghanistan. Some have put the total between 10,000 and 15.000. Sullivan on Sunday put it at “several thousand.”

Speaking on ABC’s “This Week,” Austin said that as Biden’s August 31 deadline for ending the evacuation operation approaches, he will recommend whether to give it more time.

Tens of thousands of Americans and others have yet to be flown out of the country.

In a notice Sunday, the State Department urged people seeking to leave Afghanistan as part of an organized private evacuation effort not come to the Kabul airport “until you have received specific instructions” to do so from the US Embassy’s flight organizer.

The notice said that others, including American citizens, who have received specific instructions from the embassy to make their way to the airport should do so.

Austin said the airlift would continue for as long as possible.

“We’re gonna try our very best to get everybody, every American citizen who wants to get out, out,” Austin said in the interview with ABC, which aired Sunday but was taped Saturday.

"And we’ve got — we continue to look at different ways to — in creative ways — to reach out and contact American citizens and help them get into the airfield.”

He later said this included non-Americans who qualify for evacuation, including Afghans who have applied for Special Immigrant Visas.

Austin noted that the US military on Thursday had used helicopters to move 169 Americans into the airport from the grounds of a nearby hotel in the capital.

It comes after Biden canceled his trip to his holiday home in Delaware as the crisis in Afghanistan rages on.

The White House confirmed on Saturday that the President had ditched plans to travel to Wilmington, Delaware and will instead remain in Washington DC.

Biden has faced a huge tirade of backlash over his handling of the situation in Afghanistan after he gave the green light for US troops to withdraw from the war-torn country after 20 years.

Adding to the wave of criticism, Dan Bongino has insisted Biden must "resign immediately" as his approval ratings slump.

The political commentator and radio host branded Biden a "total, epic, colossal apocalyptic failure" and accused him of being a "coward".

Speaking on Unfiltered with Dan Bongino on Fox News, he demanded Biden be impeached if he doesn't resign.

"I have a couple of messages I need to get out there – they’re important," he began.

"The first message is for Joe Biden, our president in name only: You failed.

"You are a total, epic, colossal apocalyptic failure. 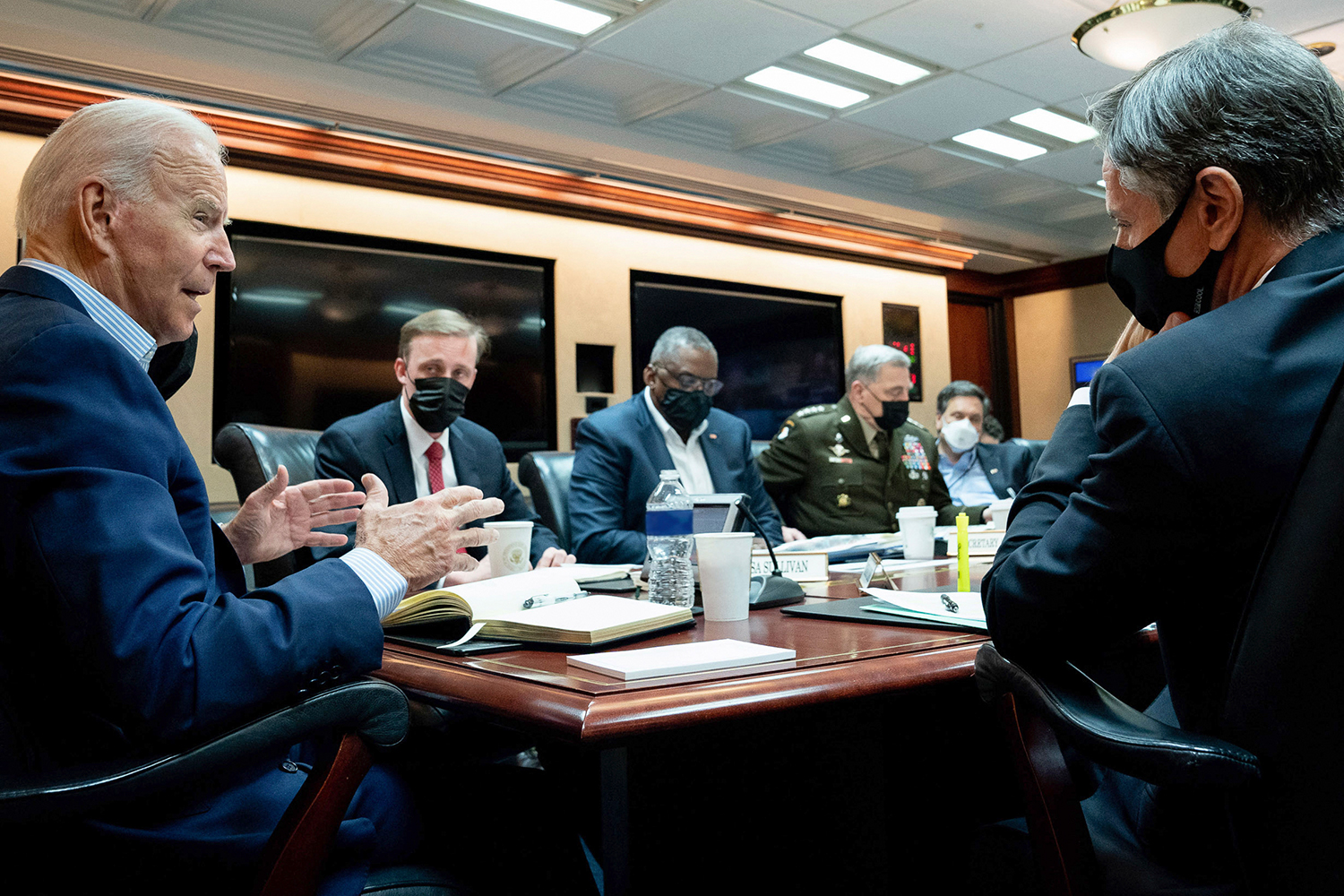