Jeremy Corbyn has finally shown his hand and decided to back a bid by MPs to delay Brexit – just an hour before today’s crucial debate was due to start.

The Labour leader will vote for a Commons amendment that would allow Parliament to seize control of Brexit and order the Government to delay Article 50 until the end of the year.

The move, led by former Labour Cabinet minister Yvette Cooper, also has the public backing of ten Conservative MPs – but she could still lose with the result said to be on a ‘knife-edge’.

Mr Corbyn has said he will support it and ordered his MPs to do the same – but will seek to shorten the nine-month extension proposed by Ms Cooper.

He has been accused of dilly-dallying over his party’s Brexit policy.

A Labour source said: ‘We’re backing the Cooper amendment to reduce the threat of the chaos of a no deal exit.

‘The Cooper Bill could give MPs a temporary window to agree a deal that can bring the country together’.

However, a number of Labour MPs in Leave-supporting constituencies have indicated they will vote against the plan, regardless of Mr Corbyn’s decision – opening up the possibility of rebellions on both sides.

The vote is set to be on a knife edge and it has been claimed up to 40 ministers could also resign to support it.

Work and pensions secretary Amber Rudd hinted last week that she could quit unless she is given a free vote today.

But last night friends of Miss Rudd said she was ‘not resigning’ and would vote against the Cooper amendment if ordered to do so. 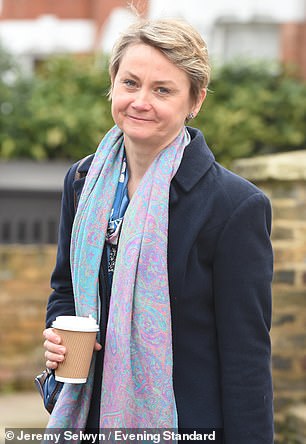 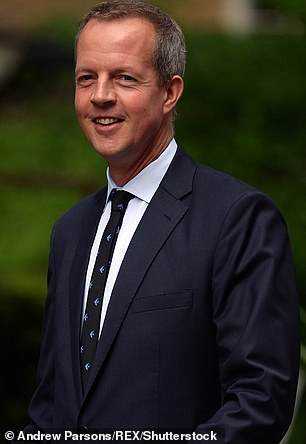 Yvette Cooper on her way to Westminster this morning ahead of her no deal amendment, which has the backing of rebel Tories including former Minister Nick Boles

A supporter of the Cooper bid told the Daily Mail that three ministers ‘at most’ could quit to back the move today – and probably none at all.

‘It’s on a knife-edge,’ the source said. ‘We’re two or three votes ahead right now, but it could just as easily swing back the other way.’

Theresa May yesterday moved to limit the Tory rebellion by promising her MPs they will get a second opportunity to block a no-deal Brexit in mid-February if her talks with Brussels hit the rocks.

Former Tory minister Nick Boles, who is backing the Cooper amendment, last night urged potential rebels not to back down, saying: ‘They shouldn’t be bought off so cheaply. It’s no substitute for a statutory lock requiring the Government to seek an extension of Article 50.’ The prospects for the amendment now hang on whether Labour decides to whip its MPs to support it.

Supporters of the move believe they have the private support of the shadow cabinet.

But a Labour source said a final decision would only be taken today, adding: ‘We are looking seriously at mechanisms to prevent no-deal but no final decision has been taken on specific amendments.’ The Cooper amendment would upend centuries of convention by putting MPs, rather than the Government in charge of Parliamentary business. 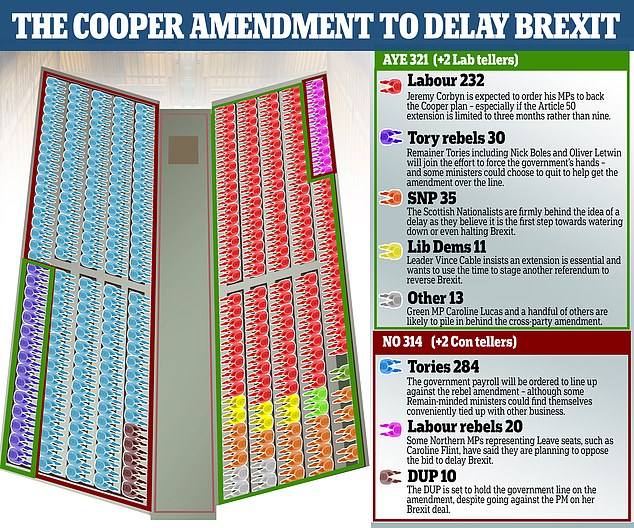 It would allow Miss Cooper to push through legislation that would order the Prime Minister to seek an extension of Article 50, delaying the UK’s departure from the EU.

Miss Cooper has suggested a nine-month delay, but senior Labour figures, including the shadow chancellor John McDonnell, have suggested cutting the delay to three months.

Allies of Mrs May have warned that delaying Brexit would be ‘deeply unhelpful’ at a time when the prospect of a no-deal Brexit is concentrating minds in Brussels.

‘If Parliament votes to extend Article 50 to prevent no-deal once then it will do it again. The possibility of no-deal, which is painful for the EU starts to disappear.’ But privately, No 10 accepts it would have no choice but to delay Brexit if parliament passes legislation ordering the Government to do it.

Miss Cooper risked accusations of hypocrisy yesterday when a campaign leaflet emerged from the 2017. The former minister, whose Normanton, Pontefract and Catsleford seat voted heavily to leave the EU, boasted in her election leaflet that she had backed the move to trigger Article 50, which set the UK’s departure date as March 29.

She also pledged she would never ‘vote to block Brexit’. Speaking at the weekend, Miss Cooper denied that her plan would block Brexit.

The amendments  and likely outcomes 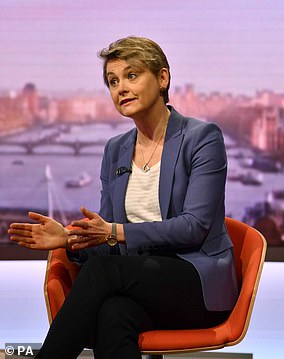 Commons is expected to vote tomorrow on amendments including Yvette Cooper’s. The Labour MP is pictured on The Andrew Marr Show on Sunday

WHAT IT DOES: Forces ministers to extend Article 50 beyond March 29 to stop No Deal.

HOW IT WORKS: Ministers lose the power to decide what is debated on February 5, which passes to backbench MPs. Miss Cooper proposes a law forcing Mrs May to ask for a delay on Brexit if No Deal is agreed by February 26.

COULD IT SUCCEED? Labour will back it and with enough votes from Tory rebels, yes.

WHAT WOULD HAPPEN NEXT? Mrs May would lose control of Brexit with No Deal off the table

WHAT IT DOES: Give control over Parliamentary business to MPs.

HOW IT WORKS: Government loses power over the Commons every Tuesday from February 12 to March 26 so backbench MPs could vote on Brexit. Could delay Article 50 or change the deal to include a customs union or second referendum.

COULD IT SUCCEED? Could pass with the support of pro-Remain Tories, Labour backing.

WHAT WOULD HAPPEN NEXT? A second referendum would be the most likely outcome

WHAT IT DOES: Proposes replacing the Northern Ireland backstop with ‘alternative arrangements’ to avoid a hard border. Also supports leaving with a deal.

WHOSE PLAN? Sir Graham Brady, chairman of the 1922 Committee.

HOW IT WORKS: Allows Mrs May to go to Brussels and say the EU must make concessions on the backstop or get rid of it.

COULD IT SUCCEED? Only if selected by Speaker Bercow – who could ignore it.

WHAT WOULD HAPPEN NEXT? Mrs May would go to Brussels and say changing the backstop would save her deal

DAME CAROLINE SPELMAN’S PLAN TO RULE OUT NO DEAL

WHAT IT DOES: Stops the UK leaving without a deal.

COULD IT SUCCEED? Yes, if enough Tory rebels vote in favour.

WHAT WOULD HAPPEN NEXT? Mrs May’s main bargaining chip would be gone – likely second referendum

WHAT IT DOES: Demands changes to the deal and hints at a second referendum.

HOW IT WORKS: Ministers must let Parliament discuss No Deal, and proposes staying in a permanent customs union. If that fails, it suggests a second referendum.

COULD IT SUCCEED? Highly unlikely, because it won’t win support from Tory rebels.

WHAT WOULD HAPPEN NEXT?  A second referendum would become the most likely outcome of Brexit