Now that wasn’t so hard was it, Boris? After he was chided for disappearing without trace, the Tory leader got mobbed when he turned up to campaign in Salisbury, writes JACK DOYLE

Even for aficionados of the political process, this has been a memorably grim election campaign.

Of course, Jeremy Corbyn has to shoulder most of the blame, with his billions of unfunded promises and cynical lies about the NHS.

But what of the Tory campaign? Whither their helmsman, the upbeat, the optimistic, the charismatic charmer Boris? Where has he been of late?

Recent appearances have revolved around him tackling yet another slightly sneering question delivered by a BBC reporter on the Ten O’Clock News or being hectored in a radio studio. 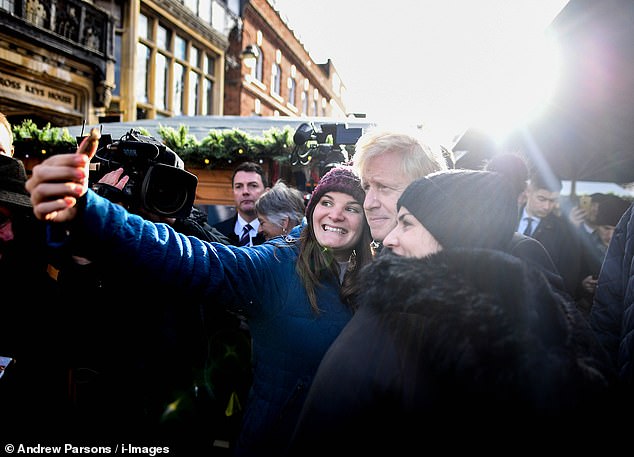 Boris Johnson stops for a selfie during a walkabout in Salisbury on Tuesday. He injected some much needed energy into what had been, until then, a safety first and largely managerial campaign (pictured, Billy Welfare and Millie Stanley, both 17, wanted selfies with the PM) 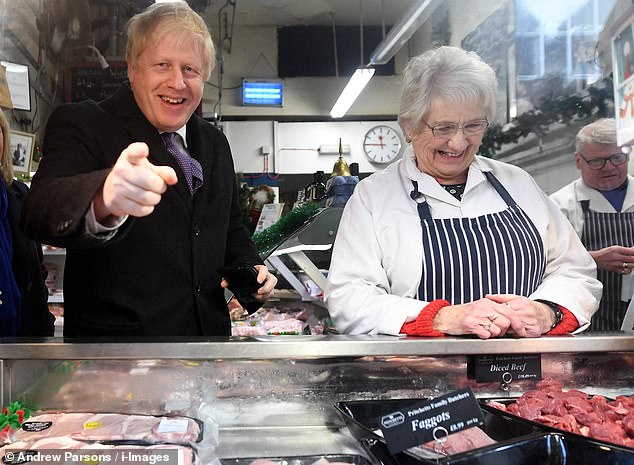 At the 150-year-old Pritchett family butchers, eight pork and cracked black pepper sausages were secured by the PM

This has not been playing well. As this newspaper’s editorial column warned yesterday, the Tory campaign thus far, though safe, is in desperate need of some turbocharging.

Is it possible, then, that the Prime Minister read those very words, put down his Mail, pushed his bowl of cornflakes to one side and announced to Carrie: ‘I’m off to Salisbury’? (Aides insist not).

Whatever the reason, it was there that we witnessed the ebullient Boris back in force.

And the good burghers of the Wiltshire market town didn’t know what had hit them when his bandwagon rolled in at lunchtime.

Innocent shoppers were the first to suspect something was up when they spotted the phalanx of photographers and TV cameras waiting on the corner of Queen Street where the Christmas market starts. There were far more police officers than warranted by the Tory candidate, John Glen, who was there pressing the flesh. Then Boris landed and 15 minutes of mayhem ensued on a madcap election walkabout.

Why was he there? Salisbury is, after all, one of the safest Tory seats, with a whopping 17,000 majority.

Perhaps it was a less than subtle reminder to voters of one of Mr Corbyn’s lowest points (admittedly in a crowded field) when he sided with Vladimir Putin after the Novichok poisonings in the city in 2018? Possibly, but certainly, it had the desired effect. 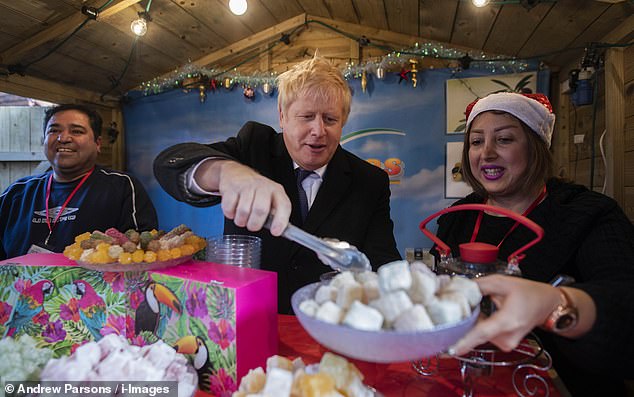 From the minute Boris Johnson got out of his car, flanked by plain clothes cops, and strode purposefully towards the crowds, they were queuing up to shake his hand

In every campaign there is a ‘moment’. In 2015, ten days before the election – yes, it feels like a lifetime ago – David Cameron bounded up on a stage in London and declared himself to be ‘bloody lively’ about Britain’s prospects for the future.

In what many observers regard as a turning point, he injected some much needed energy into what had been, until then, a safety first and largely managerial campaign. Dare I say it but yesterday had the feel of Boris’s ‘bloody lively’ moment, as he plunged into the throng on a busy shopping street.

It’s fair to say he was mobbed. From the minute he got out of his car, flanked by plain clothes cops, and strode purposefully towards the crowds, they were queuing up to shake his hand.

‘Sock it to them Boris!’ ‘Get it done Boris!’ ‘What are you doing about the train strikes, Boris?’

There was one Stop Brexit heckler, but her heart wasn’t really in it. At the 150-year-old Pritchett family butchers, eight pork and cracked black pepper sausages were secured by the PM.

Then it was on to Simply Nuts And Olives, where half-Turkish Maria and her Iranian husband Nima let their new salesman hand out Turkish delight.

On he marched, past slate clocks and leather bags. More handshakes. ‘Vote Conservative on December 12!’

When Jean Webster turned around to see what the kerfuffle was, the last thing she was expecting was the Prime Minister standing next to her. The 74-year-old from Rotherham was in Salisbury sightseeing. But she couldn’t control herself, and threw her arm around his shoulder like they were old friends.

‘I shouldn’t have done it,’ she said afterwards. ‘But he was suddenly there right up close to me. I put my arm around him, he asked me how I was going to vote. I said, “Fancy seeing you here, I am going to vote for you Bojo!”’ 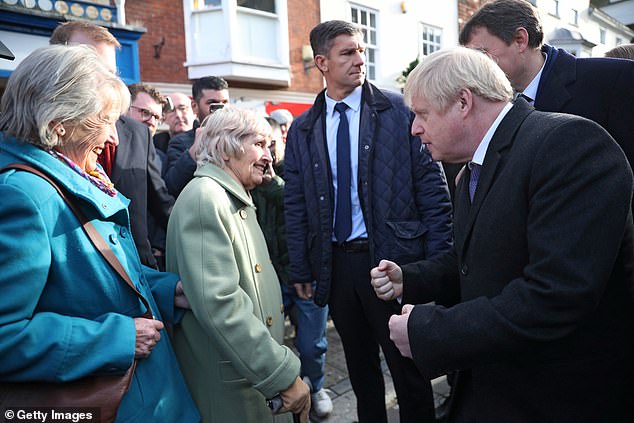 Boris Johnson visits a Christmas market whilst campaigning in Salisbury on Tuesday. Recent polls have shown Corbyn picking up points and narrowing the gap however

Like many of the younger folk, Billy Welfare and Millie Stanley, both 17, wanted selfies with the PM. ‘I think it’s good Boris comes out and is campaigning,’ said Millie. ‘He’s meeting the public. It shows he isn’t arrogant or ignorant.’

Earlier in the day, Boris had warmed up with a visit to a housing scheme on a former barracks at Wilton near Salisbury.

Enterprising locals have used cash from City Libor fines to build 44 flats for military veterans who have fallen on hard times and where they can spend up to two years getting back on their feet. There are also private homes on site to help cover the costs.

It’s a project that fits to a tee his One Nation Conservative vision: state and private money, help for the vulnerable and civic purpose.

Boris met James Gammer, a former member of the RAF who ended up sleeping in a tent on Salisbury Plain, and then in his car, before finding help through a charity. A knee injury meant that Mr Gammer, 46, couldn’t work. Now he’s retraining. Not a Tory voter, he admitted he was now more enamoured with the PM. ‘He is on the ground level. He does care,’ he said.

Boris enthused about the project and talked about extending it countrywide. When asked if he was enjoying himself or knackered, he exploded into life. ‘I’m as fit as a butcher’s dog! I’m like a coiled… spring!’ he retorted

Does he have any time to relax at the end of the day? ‘You mean apart from a few quadratic equations and pre-Socratic philosophy?’ he joshed.

Boris delivered a good line about the SNP leader wearing the ‘tartan trousers’ in a hung Parliament, but there was no doubting he was serious about the hard yards ahead, and how tight the result could be.

Recent polls have shown Corbyn picking up points and narrowing the gap. ‘Of course this election is going to go to the wire,’ Boris warned. And he bridled at the claim that he is dodging scrutiny by not agreeing to face the BBC’s arch interrogator Andrew Neil, who pulverised Corbyn last week.

‘Come on. I’m the first Prime Minister to have done a head to head TV debate,’ Boris said. ‘I did the Question Time thing, I’ve done hours and hours of phone-ins. I think I’ve fielded more questions at press conferences than any other leader at this election. I don’t think I have been unscrutinised. As Socrates said, the unscrutinised life is not the life of a man.’

Then, ever the show off, he delivered the quote in Greek. Yes, Boris was back and it’s about time. Be in no doubt that he knows the size of the challenge that lies ahead.

Along with his salted caramel, double chocolate brownie from the stall in Salisbury, he also ordered a ‘Rocky road for the rocky nine days ahead’.