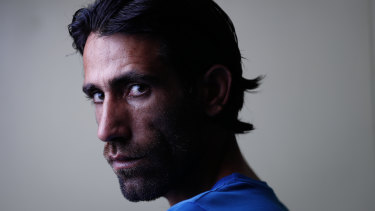 Behrouz Boochani is in NZ on a one-month visitor’s visa.Credit:Alex Ellinghausen

The Kurdish-Iranian writer was swept up in Australia's offshore processing system when he arrived on Christmas Island by boat in 2013.

He landed in Auckland after accepting an invitation to speak at a writers festival, Word Christchurch, which allowed him to arrive with a one-month visitor's visa.

It remains to be seen whether he will seek asylum to stay.

Boochani has reportedly received approval to move to the United States as part of a deal brokered in 2018 by the Australian government but has expressed dismay at the speed of that transfer.

Ardern, who on Monday addressed the issue for the first time, said she wouldn't be drawn on the "totally hypothetical" situation that would see Boochani take a longer stay in New Zealand.

"He has travel documents and he's had the ability to apply and legally be here in New Zealand for the purposes of speaking at a conference," she said.

"When it comes to asylum claims in New Zealand, those matters are dealt with totally independently of politicians."

Boochani is an outspoken critic of Australia's immigration system and "broken politics", likening the government to a dictatorship.

There are sensitivities around his arrival in New Zealand but Ardern said she wouldn't be engaging with the Australian government.

"An application was made for an individual who carries travel documents, who was resident in PNG and who is recognised to be a refugee to come and speak at a conference in New Zealand," she said.

"That visa has been approved. I see no need for me to engage personally with Australia on that matter."

Ardern did rebuke her immigration minister, Iain Lees-Galloway, who knew that Boochani was headed to New Zealand but didn't inform her.

"It is still a matter that ultimately would not have changed or as a result of me knowing," she said.

"But yes, I would have preferred to have head a heads-up."