Washington: US President Donald Trump says it looks like Iran was responsible for attacks over the weekend on Saudi Arabian oil plants but he is in no rush to respond and is still trying to find out who was behind the strikes.

"It's looking that way," Trump told reporters at the White House, adding that Washington is looking to "definitively" determine the culprit, but "pretty much already know[s]". 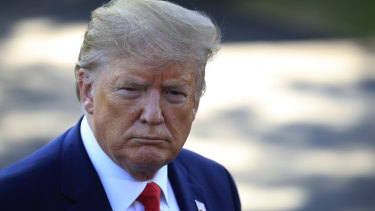 Several US cabinet officials, including Secretary of State Mike Pompeo and US Secretary of Energy Rick Perry, have blamed Tehran for the attacks, which cut 5 per cent of world crude oil production.

Iran has denied responsibility, with Iranian President Hassan Rouhani saying the strike was carried out by "Yemeni people" retaliating against attacks by the Saudi-led coalition in Yemen's four-year-old war.

Trump said on Monday the US had a lot of options to respond to the attacks, but declined to say what measures he was considering. He added that, while the US could help, he had not promised protection to Riyadh.

"With all that being said, we'd certainly like to avoid it," Trump said about a war with Iran, adding that he has not yet concluded that diplomacy has run its course.

"I don't want war with anybody," he says.

The attacks on Saudi Arabia have damaged the globe's largest crude processing plant and triggered the biggest jump in oil prices in nearly 30 years.

Trump downplayed the impact of a spike in oil prices following the attacks, saying prices had not risen much and the US and other countries could offset the increase by releasing more supply.

"They haven't risen very much and we have the strategic oil reserves, which are massive, and we can release a little bit of that, and other countries … can be a little bit more generous with the oil, and you'd bring it right down," Trump told reporters at the White House on Monday as he met with Bahrain Crown Prince Salman bin Hamad al-Khalifa.