Christchurch: There is a Maori saying, we were told at the beginning, that "tears avenge death". But if there were tears at New Zealand's national remembrance service on Friday, they were mostly shed in pride – pride in the fortitude and goodwill of the speakers, the power of the solemn occasion and the ability of their country to meet the challenge that had been set for it.

Before a crowd of tens of thousands in Christchurch's Hagley Park, survivor Farid Ahmed explained why he was able to forgive the terrorist who allegedly killed his wife and left him severely injured on that dreadful day two weeks ago. 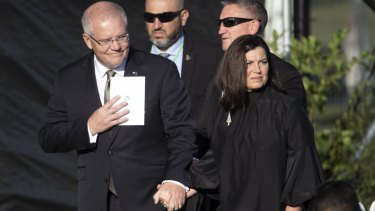 Prime Minister Scott Morrison and his wife Jenny at the remembrance service for the victims of the Christchurch terror attack.
Credit:Iain McGregor/Stuff

Mr Morrison and Opposition Leader Bill Shorten met survivors and victims' families, including Australians, and visited the Al Noor Mosque, which was open for Friday prayers once more after the horrors of March 15.

Praised around the world for her assured response to the atrocity, New Zealand's Prime Minister Jacinda Ardern entered to sustained applause from her Christchurch audience, using her speech to call for a collective response against violent extremism.

"The world has been stuck in a vicious cycle of extremism breeding extremism and it must end. We cannot confront these issues alone – none of us can," she said.

"We [New Zealanders] are not immune to the viruses of hate, of fear, of other. We never have been. But we can be the nation that discovers the cure."

Under patchwork cloud, members of Christchurch's Muslim community read out the names of the 50 men, women and children killed in the shooting. The service was punctuated by music, including British singer-songwriter Yusuf Islam – formerly known as Cat Stevens – who delivered an emotionally charged performance of Peace Train and Don't Be Shy. 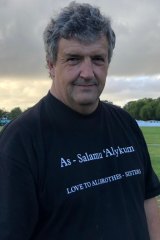 Although the pain of the tragedy was still too recent and too real, speakers tried to salvage some brightness from the "terrible act of darkness".

Shaggaf Khan, president of the Muslim Association of Canterbury, said he was incredibly humbled by the collective outpouring of grief.

"You did not leave us alone with our sadness but instead opened your hearts and stood beside us," he said. "I am so very thankful that we live in a country like New Zealand, which has responded in a way that none of us will ever forget and that let the world know who we really are."

After the ceremony,  Christchurch resident Paul Morris, 53, packed up his video camera. He had footage to bring to his friend who remains in hospital after being shot twice in the shoulder. He wore a black T-shirt bearing the Arabic phrase As-Salamu Alaykum – peace be upon you.

"This has affected everyone in this city, in the whole country really," he said. "It's going to take a long time for people emotionally to get over it. But love conquers all."

At a Christchurch hotel, Mr Morrison and Mr Shorten held separate bilateral meetings with Ms Ardern, though neither would divulge details. 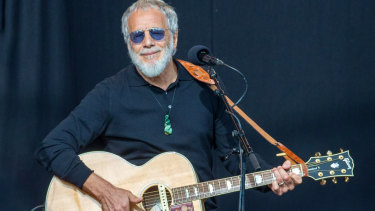 Mr Morrison said he welcomed Ms Ardern's support for action within the G20 nations to ensure social media was not "weaponised" by extremists. He would not say whether he and Ms Ardern discussed efforts to combat right-wing terrorism nor the potential extradition of the alleged gunman to Australia.

The Prime Minister insisted the bonds between Australia and New Zealand were "too strong and too deep" for this crime to weaken the two countries' special relationship.

"Extremist terrorists have no nationality," he said. "Their only nationality is hate and violence. That's not our country and it's not New Zealand either."