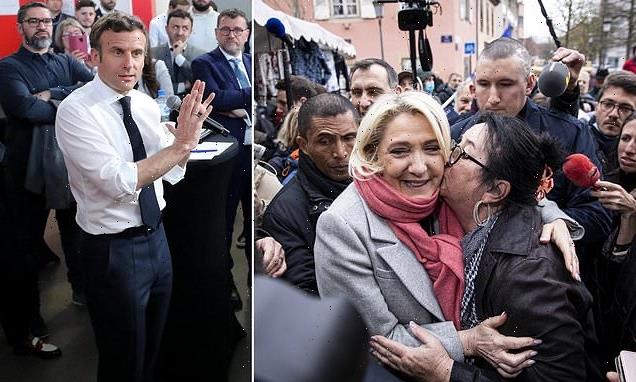 French President Emmanuel Macron’s support has seen a tumble just a week before the election as Marine Le Pen surges in the polls.

In the wake of his shrinking lead, Prime Minister Jean Castex went on the attack, warning voters the new ‘centrist’ image of perennial far-right challenger Le Pen is a ‘sham’ and that she ‘hasn’t changed’.

‘The election of Marine Le Pen would be a catastrophe for this country’.

Recent polling, which had previously put Macron well ahead, suggests he would now win by just 53 per cent to 47 per cent against Le Pen in a second round presidential run-off.

Macron had enjoyed a mid-March high of 14 point lead over Le Pen in first round polling, but now it is down to just eight points. 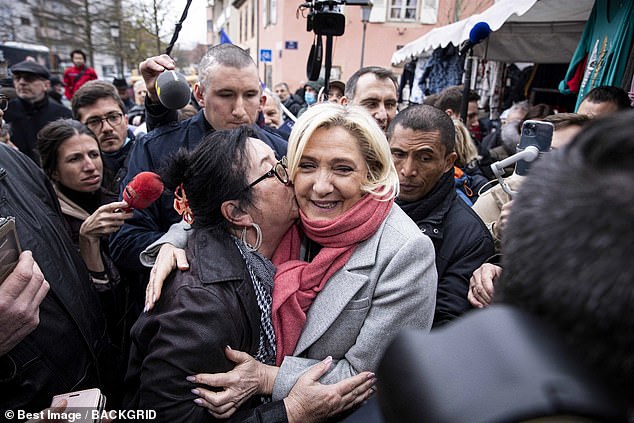 Marine Le Pen campaigning on the Haguenau market yesterday. Her support has seen a bounce in recent weeks in a blow for current French President Emmanuel Macron 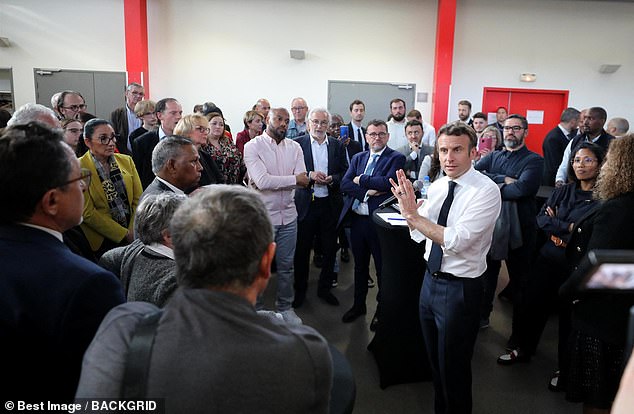 President Emmanuel Macron visiting Dijon at the Maison-Phare for an exchange with associative actors. Macron is still the favourite to win a second term in the French elections this April

Le Pen and her National Rally party – formerly the National Front – have moved away from their usual agenda of anti-immigration and anti-EU this election.

Instead she has focused on the cost of living crisis and policies such as cutting fuel taxes, and voters have responded.

But Castex was dismissive of her new policy shift. ‘We are in a serious crisis. It is not easy to govern a country like France.’

He added: ‘Her programme has changed a lot, because the idea is to attract people, but basically the values that we know in the National Rally, in the Le Pen family, are the same.’ 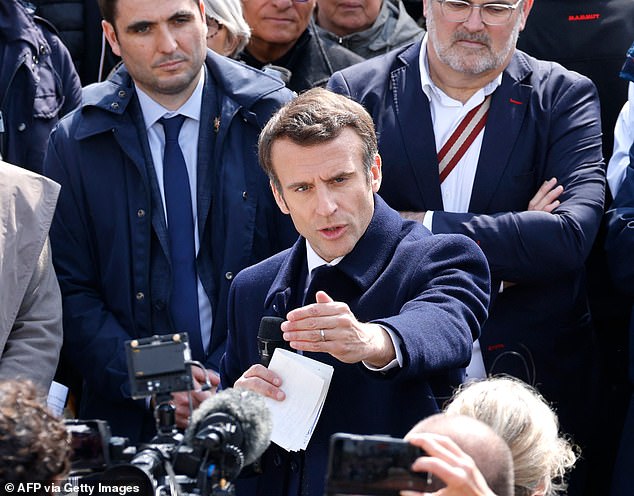 Macron delivers a speech during a campaign visit in Fouras, western France, on March 31, 2022. He had enjoyed a mid-March high of 14 point lead over Le Pen in first round polling, but now it is down to just eight points 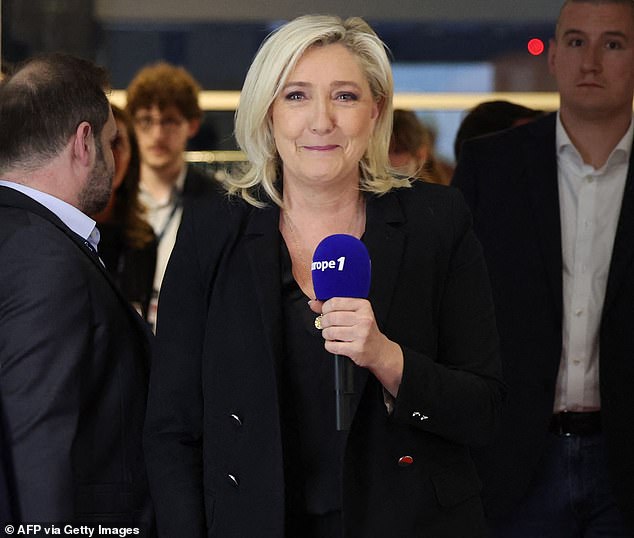 But with a little over a week to go until the first round elections on April 10, it is looking like it will be Le Pen to face off against Macron in the second round once again, in a re-run of the 2017 elections which Macron won with 66 per cent of the vote to 34 per cent.

The French elections are dividied into two rounds, with only the top two candidates advancing to a second round runoff.

The nearest other contender is the hard-Left Jean-Luc Mélenchon, who trails her by up to seven per cent.

The Telegraph report that one survey published by Le Monde this week said the number of people seeing Ms Le Pen as a threat has dropped two points since January, to 51 per cent.

Half of all people surveyed said they would not vote for her under any circumstances, but that was fewer than those who refused to back Mr Mélenchon and fellow far-right candidate Eric Zemmour, who was seen as Le Pen’s likeliest rival.

Vladimir Putin’s invasion of Ukraine has dealt a blow to the far-right cause across Europe, which is seen to be ideologically aligned with the Russian dictator, and boosted Macron because of his handling of the diplomatic crisis caused by the war.

Macron can rest easy to some extent, as Le Pen will still face an uphill battle to unseat him if she does make it to the second round, as the current president is polled to take over fifty percent of the vote.