The remains of 215 indigenous children forcibly removed from their families have been found at a mass grave at a former residential school in Canada.

The grave was found on the site of a school set up by the Roman Catholic church in 1890 and closed in 1977. It was part of a network of establishments across Canada set up to assimilate native children.

The remains described as “many, many years old” included those of children as young as 3, The New York Times reported. 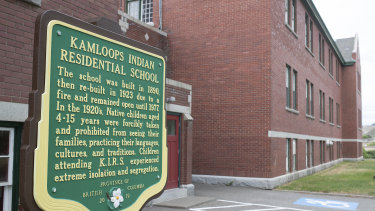 According to one estimate, more than 150,000 children were sent to the schools, where they were banned from speaking their own languages or following their cultural traditions.

Thousands went missing from the institutions, some of whom died and some ran away. Abuse was rife, but families were threatened with jail if they did not surrender their children to the schools.

The treatment of the children remains a scar on Canadian history. In 2015 it was described as a “culture of genocide” by the country’s truth and reconciliation commission.

The grave was discovered by a team using ground-penetrating radar at Kamloops, about 350 kilometres north-east of Vancouver.

How and when the children died is unknown. They were members of the Tk’emlups te Secwepemc nation, an indigenous group in British Columbia.

Documents submitted to the commission laid bare the harsh conditions at the school. In 1935, an official report after a measles outbreak noted that 285 children slept in five dormitories, making it impossible to isolate them and prevent the disease from spreading.

Rosanne Casimir, chief of the Tk’emlups te Secwepemc, said she was working with museums to try to find records of the children’s deaths.

“It’s a harsh reality and it’s our truth, it’s our history,” Casimir said at a news conference. “And it’s something that we’ve always had to fight to prove. To me, it’s always been a horrible, horrible history.

“We had a [suspicion] in our community that we were able to verify. To our knowledge, these missing children are undocumented deaths,” she said.

“Some were as young as three. We sought out a way to confirm that [suspicion] out of deepest respect and love for those lost children and their families, understanding that Tk’emlups te Secwepemc is the final resting place of these children.

“This is the beginning but, given the nature of this news, we felt it important to share immediately.”