Seven employees at an Indian restaurant in Bradford have tested positive for Covid-19, prompting bosses to temporarily shut down the premises.

The cases at the popular Akbar’s restaurant on Leeds road have all come in a short three-week window, with the last known case reported on August 20.

The owners of Akbar’s have made the decision to shut down entirely for five days, with all infected staff self-isolating for at least 10 days.

It follows the news that, from Wednesday, local Covid-19 restrictions will be eased in parts Bradford, allowing social gatherings between two homes. 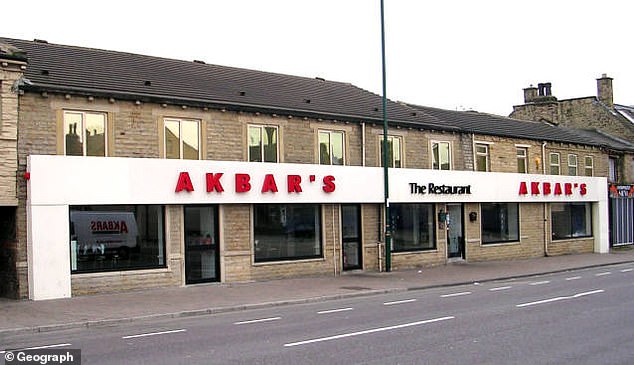 Seven employees at the popular Akbar’s restaurant in Bradford (pictured) have tested positive for Covid-19, prompting bosses to temporarily shut down the premises 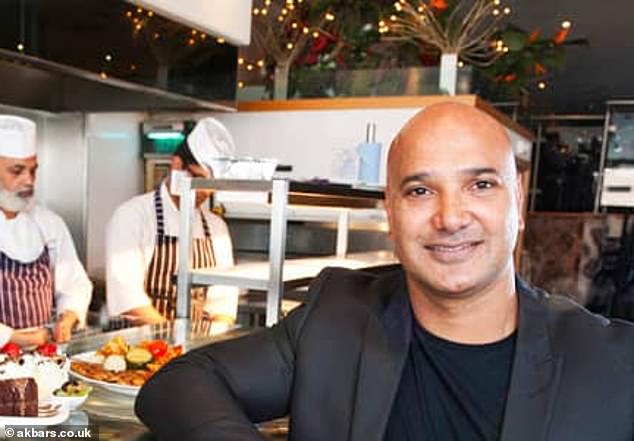 Akbar owner Shabir Hussain (pictured) said: ‘We could have sent a number of our staff home to self-isolate and stayed open using other employees but we felt this was the responsible thing to do to make sure we are 100 per cent safe going forward’

Lockdown rules will be loosened in eight areas of Northern England from next Wednesday, September 2, the Department of Health has confirmed.

Bolton, Stockport, Trafford, Burnley, Hyndburn and parts of Bradford, Calderdale and Kirklees will be afforded more freedom to meet other people from next week.

More than a million people living in Greater Manchester, Lancashire and West Yorkshire had been banned from meeting people from other households since July.

But these rules will now be lifted for those living in all parts of the boroughs except Bradford city, Keighley, Halifax, and Dewsbury and Batley in Kirklees.

Falling infection rates in those areas have led officials to soften restrictions to bring them into line with the rest of the country.

It means businesses such as beauty salons, indoor play areas, bowling alleys and ice rinks will also be able to open after being held back when they reopened in the rest of the country on August 15.

Leicester, however, must remain under its current lockdown rules for another two weeks until at least September 11. It was the first part of the UK to lock down and has now faced extra rules for two months.

Birmingham, which had been touted as the next area to face the dreaded rules, has escaped Government action but officials have raised serious concerns about the nearby borough of Sandwell, as well as Stoke-on-Trent and Swindon.

Akbar owner Shabir Hussain said: ‘We could have sent a number of our staff home to self-isolate and stayed open using other employees but we felt this was the responsible thing to do to make sure we are 100 per cent safe going forward.

‘It also gives us a chance to give our people a bit of a holiday because they have been so incredibly busy during the Eat Out to Help Out promotion.

‘We apologise to all our customers who have made bookings but hopefully they will understand that we all have to make sacrifices if we are to get the Covid-19 virus under control and protect the most vulnerable in our district.’

Mr Hussain has been praised for his decision by Bradford Council ‘s director for public health, Sarah Muckle.

She said: ‘The restaurant had good Covid-19 safety measures in place to protect customers and we agree with their decision. We are extremely grateful to the Akbar’s team for the way they have worked with us on this and for the responsible, professional, proactive action they have taken.

‘We have no reason to believe customers were at risk because the restaurant’s front of house COVID-19 safety measures are very robust.

‘It’s never an easy decision to close a business but this kind of leadership is exactly what we will need if we are to get on top of small outbreaks and stop the virus spreading into our communities.’

Bookings are still being taken for when Akbar’s re-opens for business on Friday, September 4.

Along with parts of Bradford, local Covid-19 restrictions were eased in northern England, which will allow social gatherings between two homes from Wednesday in Bolton, Stockport, Trafford, Burnley, Hyndburn and parts of Calderdale and Kirklees.

Matt Hancock said: ‘We brought in measures to protect people in these parts of northern England.

‘We’re seeing the positive results of our local approach, and are able to bring in increasingly targeted measures.’