Incredible story of how a father, 52, survived a bushfire by hiding in a water drum and walking through molten aluminium in thongs – and his battle to rebuild his life after suffering horrific burns

A man who hid in a water drum from a bushfire before walking through molten aluminium in a pair of thongs to safety has told of his incredible battle for survival.

Roy Annesley was preparing to flee as bushfires approached the home he’d built in bushland at Yarranbella on the NSW mid-north coast when a fireball exploded around him on November 8.

The 52-year-old single father had finished work for the day at the Bowraville Saw Mill and he could see smoke about 20km away.

When a friend nearby told him he was evacuating, Mr Annesley decided he would too. 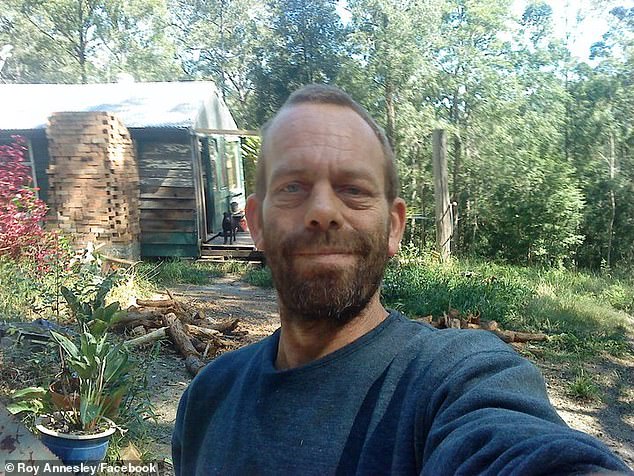 Roy Annesley pictured in front of his home in 2010. Mr Annesley built his own shack 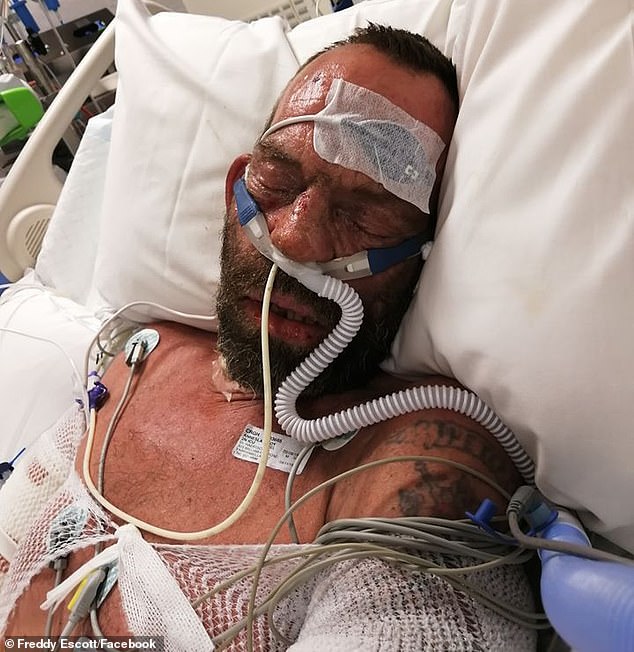 Roy returned to his house on his shiny chrome-and-black motorbike in a pair of shorts and thongs to get his pet dog and sheep.

‘I had gone home to get my stuff to evacuate and was still sitting on my motorbike in the driveway – then bang, it got me,’ he told the Sydney Morning Herald.

A giant wall of flame came out of nowhere and engulfed him.

He ran to free his dog from its leash despite having already been burnt.

Gas bottles started blowing up around him as Roy jumped into a half-full water drum to survive.

Soon the aluminium guttering began to melt from the severe heat as the flames incinerated his home of 20 years in just 10 minutes.

It pooled around the tub where Mr Annesley was sheltering. 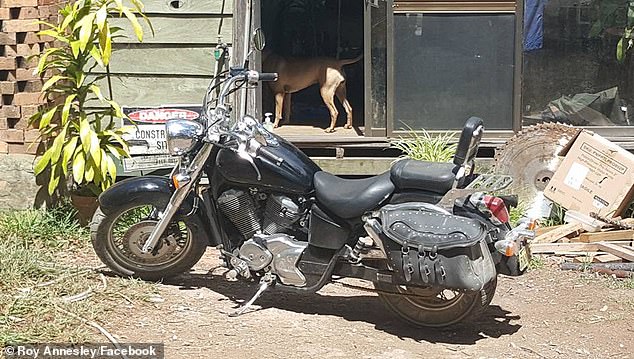 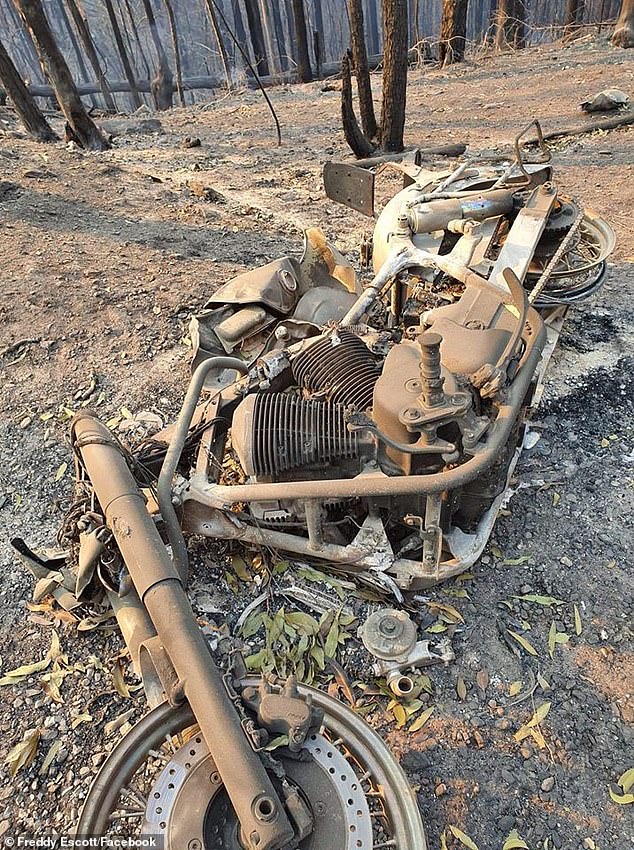 When Roy jumped out of the tub to flee, his feet landed in the molten aluminium, severely burning them.

He then walked 1.5km on his red-raw feet over smoking hot ground until he reached a neighbour’s empty home where he passed out on the lounge.

Desperate for water when he awoke, he had to open the toilet cistern to drink.

He tried to escape in his neighbour’s car but the road was blocked by falling trees and he was forced to return.

Again he passed out and was found the next day and rescued in the back of a ute.

Mr Annesley was flown to Sydney with burns to 55 percent of his body.

He was put in an induced coma for three weeks at Concord Hospital where he received skin grafts to his feet and hands, legs and arms. 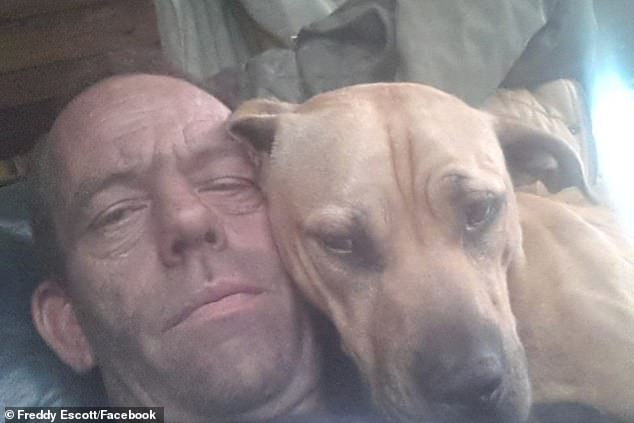 Mr Annesley went back home to save his dog and managed to  unclip the leash despite being burnt by the fire. He does not know where his dog is, though he knows his sheep didn’t make it 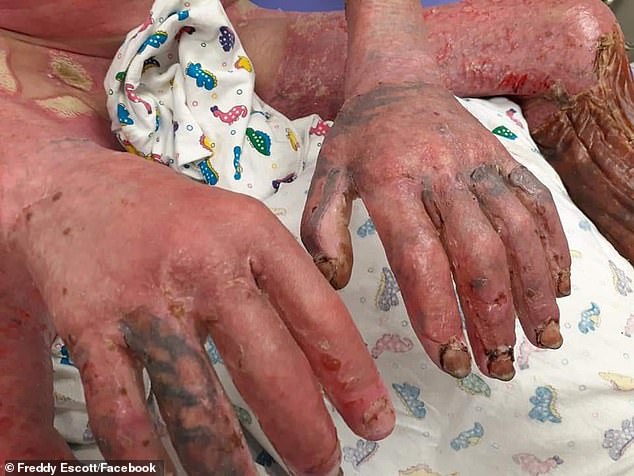 For two months Mr Annesley recovered in the hospital before being discharged into a motel room in Western Sydney which he uses as a base to travel back and forth from the hospital to change his dressings.

Mr Annesley faces a long road to recovery as for the moment he can no longer use his hands for the simple challenges of life such as unscrewing the cap on a jar of sauce.

‘The worst part of it is trying to get everything working again properly. My hands don’t work … my arms I can’t straighten properly. Legs are the same,’ he told the Sydney Morning Herald.

Despite being on painkillers he is in constant agony from his injuries and cannot bend his hands.

Mr Annesley has said he just wants to go back home to his job and his shack – but his home has been burnt to the ground and it wasn’t insured.

Worse, he had just taken out a $30,000 loan to buy a new sewage tank, solar panels and a generator to fix up his shack, six months before fire destroyed it.

For now, Mr Annesley’s home will be a bus that he bought after his son Freddy Escott set up a Go Fund Me page on his behalf.

The bus has a double bed, hot water, a microwave and a fridge. 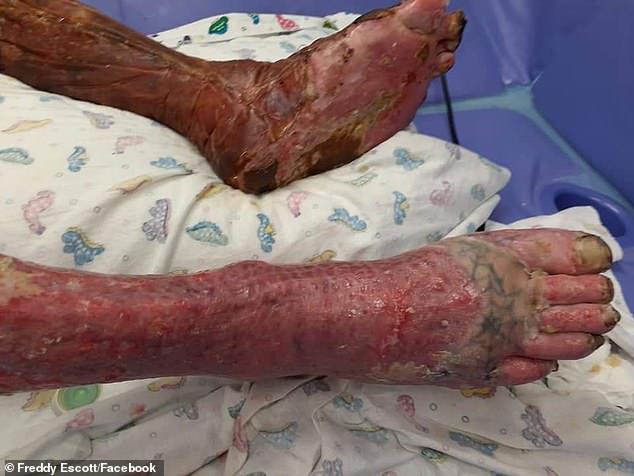 Mr Annesley plans to drive it back to Yarranbella and rebuild his life, although he is not sure if he can go back to his land as he does not hold title over it, although he has had a caveat over half of the property since 2003.

A sign saying: ‘No entry’ has popped up since Mr Annesley has been in hospital.

He still doesn’t know where his dog is, or if he survived, although he knows his sheep got burnt and he is suffering from nightmares.

Despite the pain and horror, his trauma has been eased by the kindness of the Nambucca Valley community who have rallied around him.

”I honestly didn’t know there were that many people who cared,’ he told The Land.

Mr Annesley’s Go Fund Me page, started by his son Freddy Escott, had raised more than $9700 on Saturday.

The national death toll in Australia’s 2019/2020 bushfire season was 28 as of Wednesday January 15, with 20 confirmed deaths in New South Wales, three in South Australia and five in Victoria.

Robert Lindsey, 77, and Gwen Hyde, 68, were found in their burned out Coongbar home near Casino on October 9th.

The body of 85-year-old George Nole was found in a burnt out car near his home in Wytaliba, near Glen Innes.

Vivian Chaplain, a 69-year-old woman from Wytaliba, succumbed to her injuries in hospital after attempting in vain to save her home and animals from the blaze.

The body of 63-year-old Julie Fletcher was pulled from a scorched building in Johns River, north of Taree.

Barry Parsons, 58, was found in a shed at Willawarrin, near Kempsey.

A 59-year-old man was founded sheltered in a Yarrowitch water tank on November 7. He died of injuries on December 29.

David Moresi, 69, died after being involved in a traffic incident while working at the at the Gelantipy fire in East Gippsland on November 30.

Firefighters Andrew O’Dwyer, 36, and Geoffrey Keaton, 32, died on December 19 after a tree fell on their truck while they were travelling through Buxton, south of Sydney.

Samuel McPaul, 28, was battling a blaze in Jingellic, in Green Valley, about 70km east of Albury on the border of NSW and Victoria, on December 30 when a ‘fire tornado’ caused his 10-tonne firetruck to roll.

The body of 69-year-old Ron Selth was found in his Charleston home, which was destroyed by the Cudlee Creek blaze on December 21.

Dairy farmer Patrick Salway, 29, and his father Robert, 63, died trying to save their property in Cobargo, near Bega, on December 31.

A 70-year-old man, named by local media as Laurie Andrew, was found dead outside a home at Yatte Yattah, west of Lake Conjola.

The body of a 70-year-old man was found in a burnt vehicle on a road off the Princes Highway at Yatte Yattah on the morning of New Year’s Day.

The body of a 62-year-old man was found in a vehicle on Wandra Road at Sussex Inlet about 11.30am on New Year’s Day.

A body, believed to be a 56-year-old man, found outside a home at Coolagolite, east of Cobargo on New Year’s Day.

An off-duty RFS firefighter, believed to be 72-year-old Colin Burns, was found near a car in Belowra after the New Year’s Eve fires swept through.

Beloved great-grandfather Mick Roberts, 67, from Buchan, in East Gippsland, was found dead at his home on the morning of New Year’s Day.

Fred Becker, 75, was the second person to die in Victoria. He suffered a heart attack while trying to defend his Maramingo Creek home.

David Harrison, a 47-year-old man from Canberra, suffered a heart attack defending his friend’s home near Batlow on Saturday, January 4.

A 71-year-old man was found on January 6. Police have been told the man was last sighted on December 31, 2019 and was moving equipment on his property in Nerrigundah.

Forest Fire Management firefighter Mat Kavanagh, 43, was killed Friday January 3 when he was involved in a two-car crash on the Goulburn Valley Highway.

Bill Slade, a 60-year-old father of two from Wonthaggi was fighting fires with Parks Victoria at Omeo when he died on January 11. He has been remembered as one of the longest serving, most experienced and fittest firefighters.

Well-known outback pilot Dick Lang, 78, and his 43-year-old son, Adelaide surgeon Clayton Lang, died in the Kangaroo Island bushfire after their car was trapped by flames.