Now that’s the ultimate game of fetch! Incredible action shots show daredevil dogs leaping through the air to grab frisbees from their owners

Most dogs are known to enjoy the odd game of catch with their owners, but these stunning action photographs reveal the incredible heights they manage to reach as they soar through the air to catch a frisbee.

Photographer Claudio Piccoli, who is based in Italy, has travelled to Canada to snap pictures of pets and said he found the ‘idea of immortalising their evolutions very stimulating’.

More than a decade after he spent his childhood playing with his grandmother’s beloved pet, he grew an interest in photography at university.

His third dog made him ‘get even closer to the dog sports, especially to the disc’, he told the Daily Star.

Mr Piccoli, who boasts a 56.3k followers, would take pictures of his pets on holiday and dog photography grew from there.

He said: ‘I ask for small variations in the throws or in the positions of both to get what I think is the maximum athletic expressiveness of the dog in the air.’

The Nikon Ambassador said the first few times tend to be the best performances and nothing can be left to chance.

He added: ‘An incorrect position completely cancels the effectiveness of the action as well as an incorrect environmental contour.’

In September, the dog-owner-of-four photographed Zinga and Sara at sunrise in Toronto’s Scarborough Bluffs park, while he has also had a dog-owner kneel in the North Sea as their beloved pet leaped across them to reach a Frisbee mid-air for his photo-series. 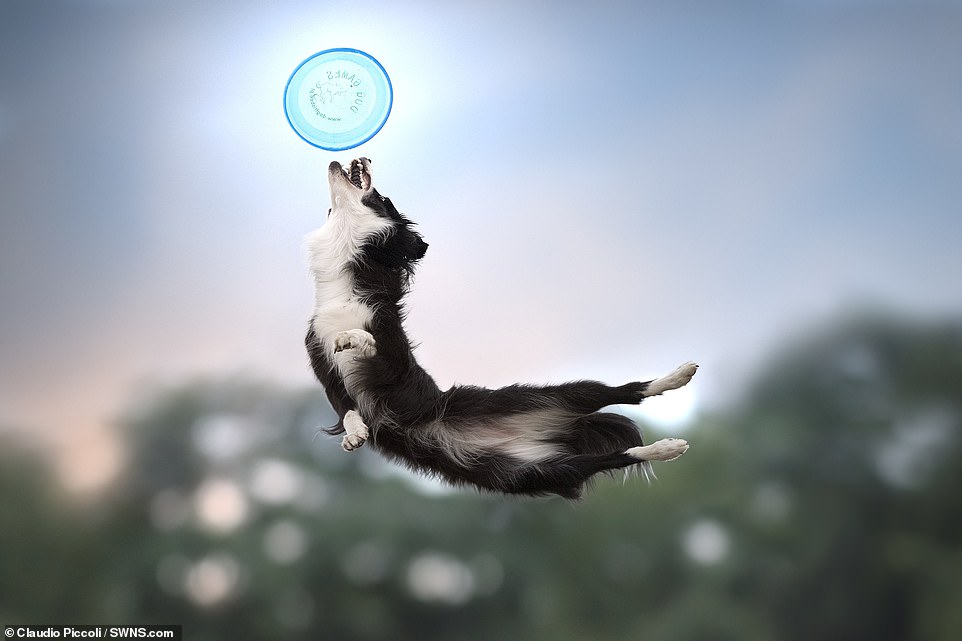 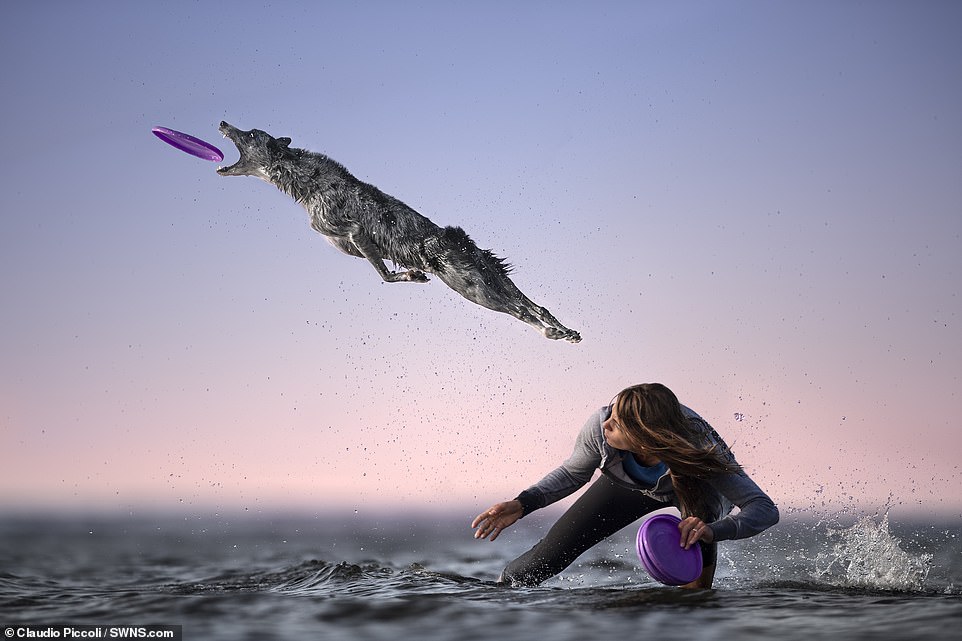 Zinga and Sara were captured at Scarborough Bluffs Park in Toronto, Canada, during sunrise in September. Claudio used a Nikon D5 and Nikkor 300mm for the spectacular photo which has gathered 26, 663 likes on Instagram 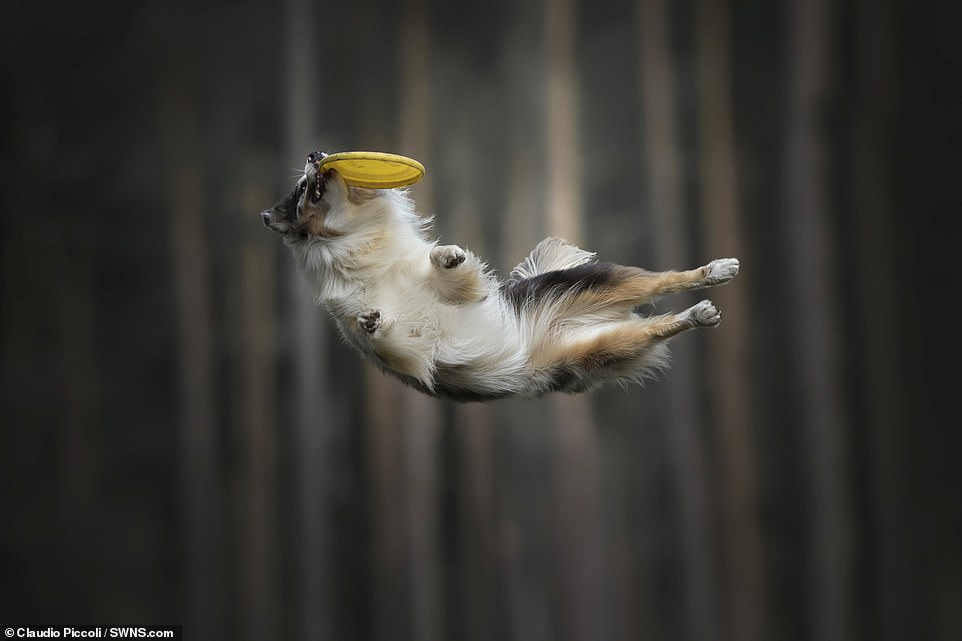 Splash flashes its stomach as it performers a dancer’s pose to catch the Frisbee between its teeth in an enchanted wood in the UK. Claudio, who has four dogs, believes while the first shot is often the best and nothing can be left to chance 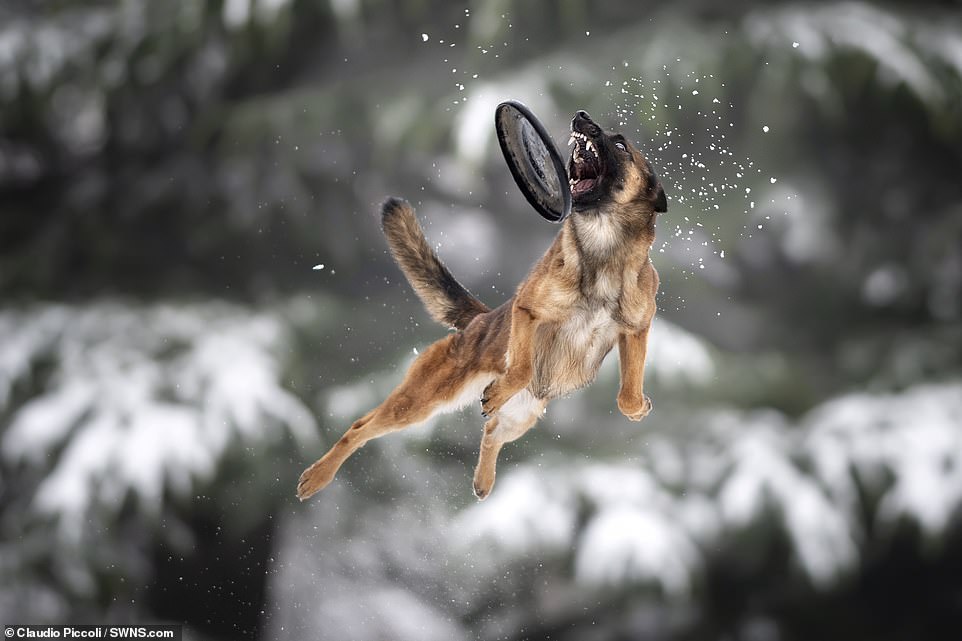 Caramel coloured Mala leaps into the air and opens wide as it tries to catch the Frisbee against the snowy backdrop in the sensational photo series. Claudio captioned the moment on Instagram: ‘It’s amazing how this dog can fly so high and lands down all the time safe with four paws…it seems a cat!!!’ 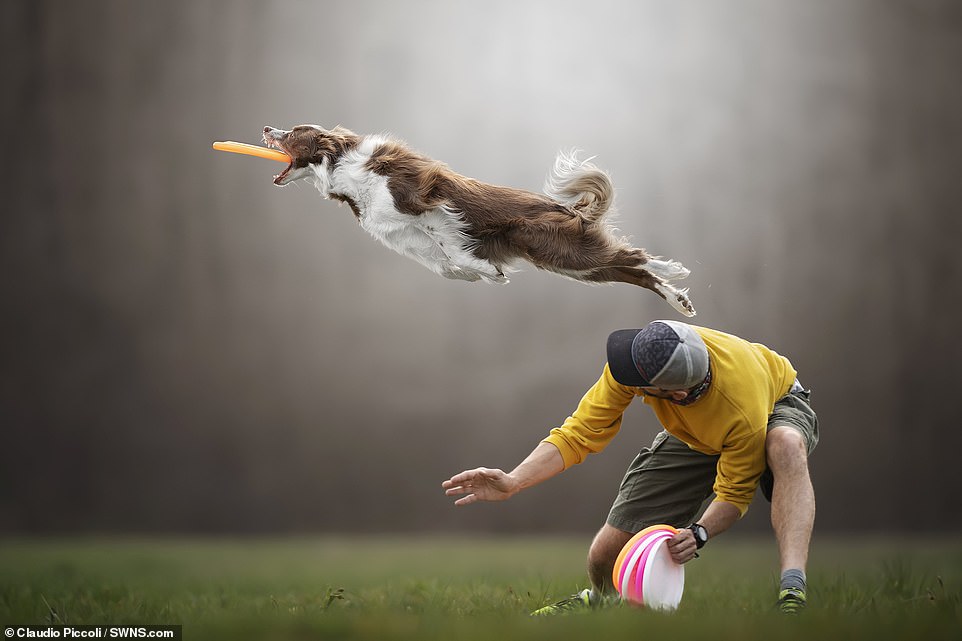 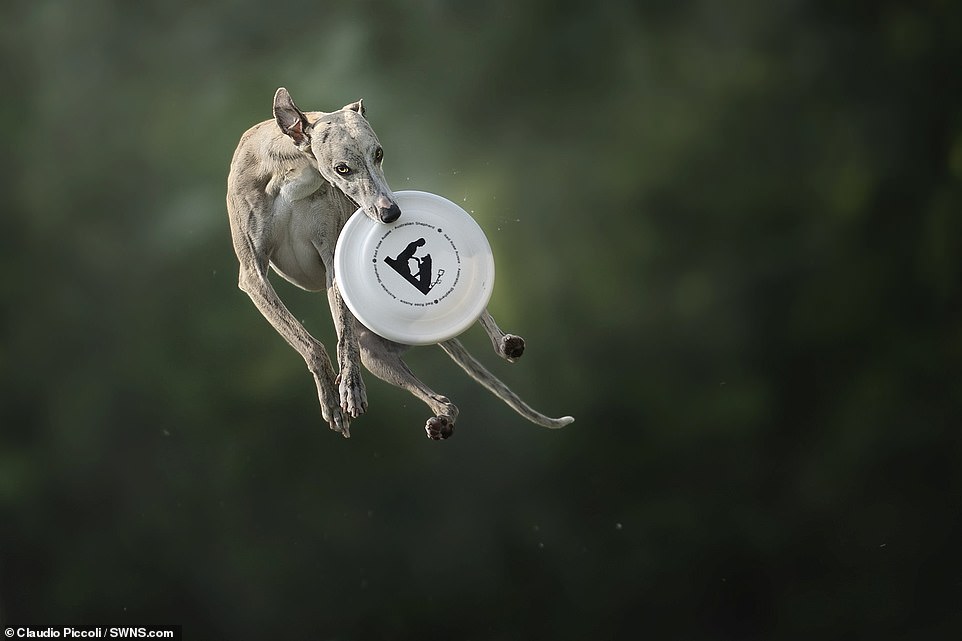 Claudio asks for ‘small variations’ in the throws and positions in order to get the ‘maximum athletic expressiveness of the dog’ mid-air. Here a Whippet called Cleo towers above the ground and successfully catches the prop in the picture taken in Switzerland last month 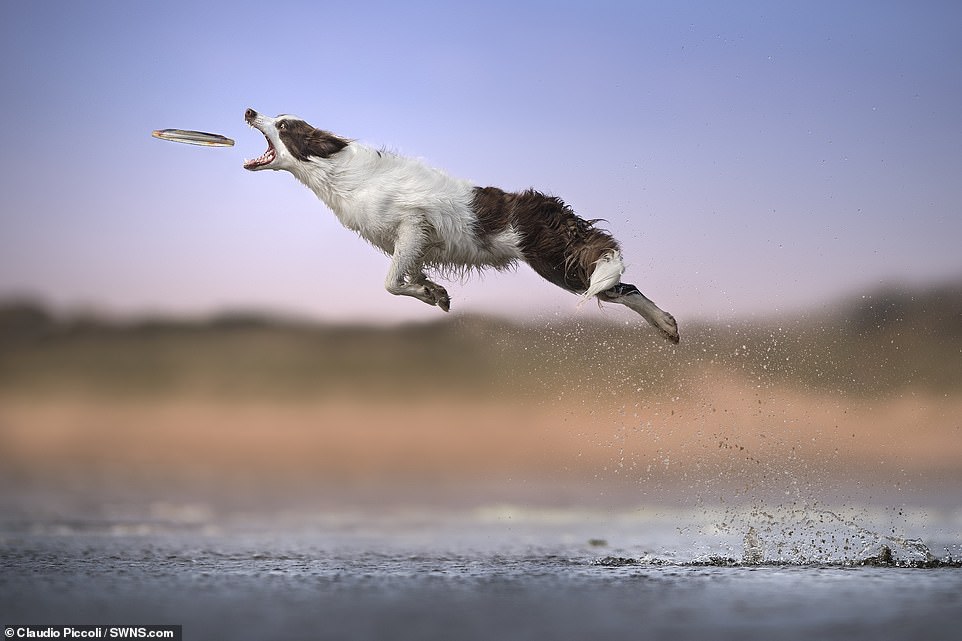 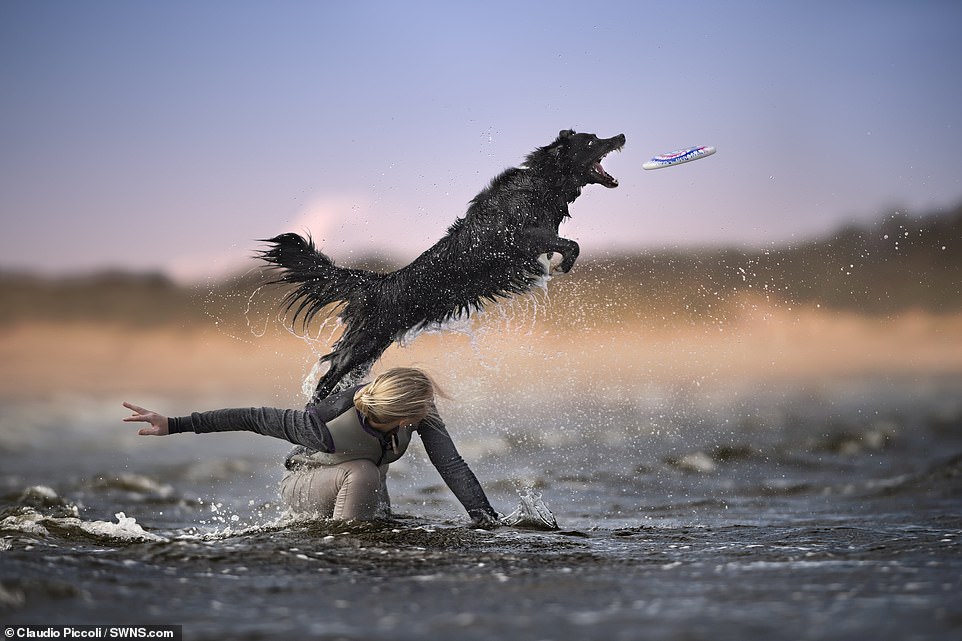 A dog-owner kneels in the North Sea and keeps her head low to offer her beloved pet Mara a platform for reaching the Frisbee. Water sprays for the pet’s fur coat as it makes a giant leap for the object 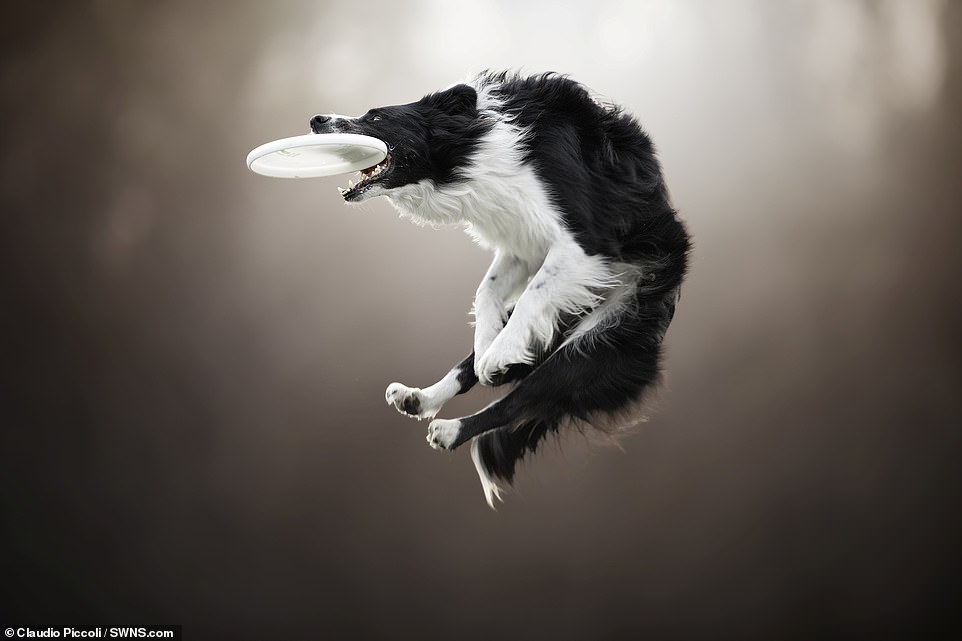 Piccoli has made a living by making pictures of pets across the globe look like moving action shots. Here a Border Collie called Bill is captured with a Nikon D5 and Nikkor 300mm. He cuts an acrobatic figure as it secures the Frisbee in its mouth while its legs curve inwards for balance