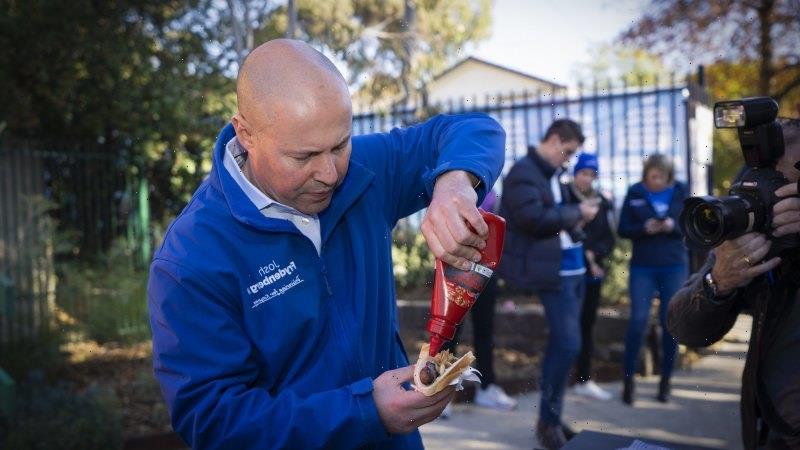 After six weeks of campaigning, Josh Frydenberg and Tim Wilson have made a last-ditch sprint to the finish as they look to stave off fierce challenges from teal independents in former Liberal strongholds Kooyong and Goldstein.

Frydenberg was out early on a frosty election morning, criss-crossing the suburbs of Kew, Surrey Hills and Balwyn soon after polls opened at 8am, hammering home his message to “keep Josh” rather than elect his opponent Monique Ryan. 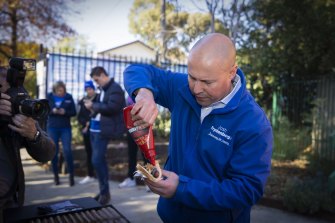 There was some argy-bargy over the signs plastered across churches and primary schools, as there is on every election day. Ryan was forced to amend Chinese-language voting cards and signs after the Australian Electoral Commission said they breached Commonwealth laws.

At Chatham Primary School, a Frydenberg sign had to be moved by a few centimetres after complaints that it was too close to a polling booth. In such a close contest, even the smallest advantage was worth arguing over.

After changing location to avoid a ruckus with Ryan’s volunteers, Frydenberg cast his vote at Belle Vue Primary School in Balwyn North. Soon after walking in, someone played Carlton’s theme song over a speaker for the mad Blues fan. Kooyong is the oldest, darkest (navy) blue seat there is and the treasurer does not want to be the one to let the Liberals down.

His voice sounded a bit hoarse as he complimented the children running the cake stall on their money-handling treasury skills, before chewing on his fourth sausage in bread for the morning.

When the photographers trying to get the shot asked him to do it again for the cameras, he ate his fifth.

“There’s a good mood out there on the booths. It’s a long day, it’s been a long campaign,” he said, confident that he would remain the member for Kooyong.

In Camberwell, Ryan cast her vote at Hartwell Primary School, posing for photos with energised supporters handing out her how-to-vote cards.

After marking her vote, she kissed the paper and crossed herself before stuffing it into the ballot box. Ryan said she felt like she had left nothing in the tank with her campaign. 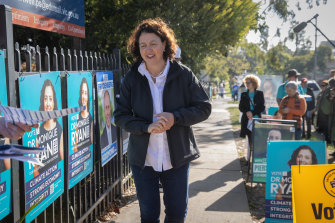 At Surrey Hills, Kooyong voter Irena said she was supporting Frydenberg, but didn’t mind if Ryan managed to beat him: “I’d actually like to vote for both of them,” she said.

Another voter, Lisa, was happy to give her reasons for voting for Ryan, although she wasn’t sure if the candidate had done enough to win over such a storied Liberal electorate.

“I think she’s a breath of fresh air, climate change, accountability, women – she’s got a lot going for her,” she said.

In Kew East, Mike Ricketts said he was voting for Frydenberg because he provided stability, although he touched on one of the treasurer’s biggest hindrances in retaining the seat: Scott Morrison.

“He’s a great guy and despite the fact I don’t particularly like the prime minister, I just think he’s a good guy for the future,” he said.

The weather warmed up later in the afternoon, but it was still slightly frosty at Beaumaris Secondary College, where both Liberal Tim Wilson and independent Zoe Daniel were a few metres apart from each other shaking hands with Goldstein voters.

The booth was a pretty good one for Wilson in 2019, with over 60 per cent of the primary vote, and he was telling blue-shirted Liberal volunteers that if he lost “Bowie”, then he was in big trouble. 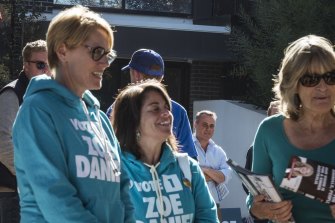 Voters The Sunday Age spoke to this time around were backing Wilson again, despite Daniel’s momentum and strong advertising presence.

“I don’t think Australians realise just how well off we are,” said Liberal voter Steve. “It’s easy to criticise from the cheap seats, but the Liberals are doing a pretty good job, all things being equal.”

While she had voted for other parties in the past, Frances said she didn’t like Daniel’s “in your face” campaign and would be voting for the more “down to earth” Wilson.

“I think he’s got the right economics and so forth, doing more for the area,” she said.

Wilson said he was confident he would remain the member for Goldstein after Saturday.

“The feedback has been amazingly positive, Liberal voters are sticking with us,” he said.

Daniel said she was optimistic she had done enough. She said voters were thanking her for providing an alternative in an area where they had felt taken for granted.

“People are really excited, will it be enough? I don’t know,” she said.