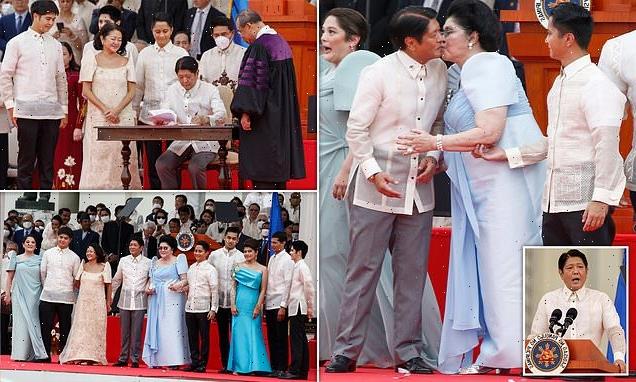 Imelda Marcos, 92, watches her son BongBong being sworn in as Philippines president as he praises late dictator father’s regime for ‘getting it done’

Ferdinand Marcos Jr on Thursday praised his dictator father’s rule after being sworn in as the country’s new leader, completing a decades-long effort to restore the clan to the country’s highest office.

‘Bongbong’ Marcos Jr, 64, won last month’s elections by a landslide, securing the biggest victory since his father and namesake was ousted by a popular revolt in 1986.

He was lovingly embraced by his mother Imelda, who at 92 years of age watched her son get sworn in as the country’s president 36 years after her husband was deposed.

Marcos Jr succeeds the hugely popular Rodrigo Duterte, who gained international infamy for his deadly drug war and has threatened to kill suspected dealers after he leaves office.

The new president swept to power with the help of a massive social media misinformation campaign.

Pro-Marcos groups bombarded Filipinos with fake or misleading posts portraying the family in a positive light while ignoring the brutality and theft of billions of dollars from state coffers during Marcos Sr’s 20-year rule. 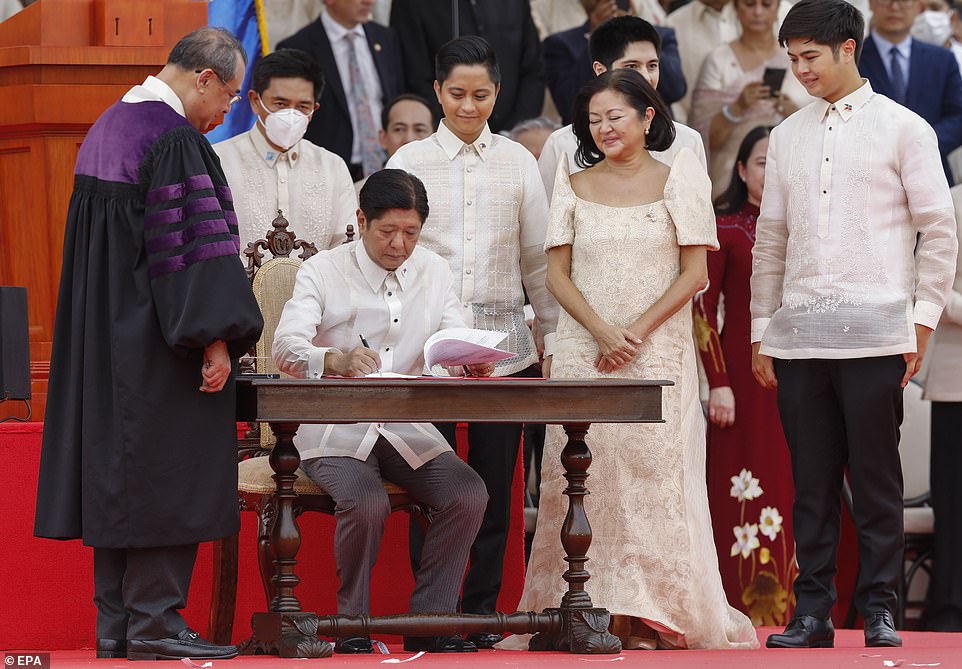 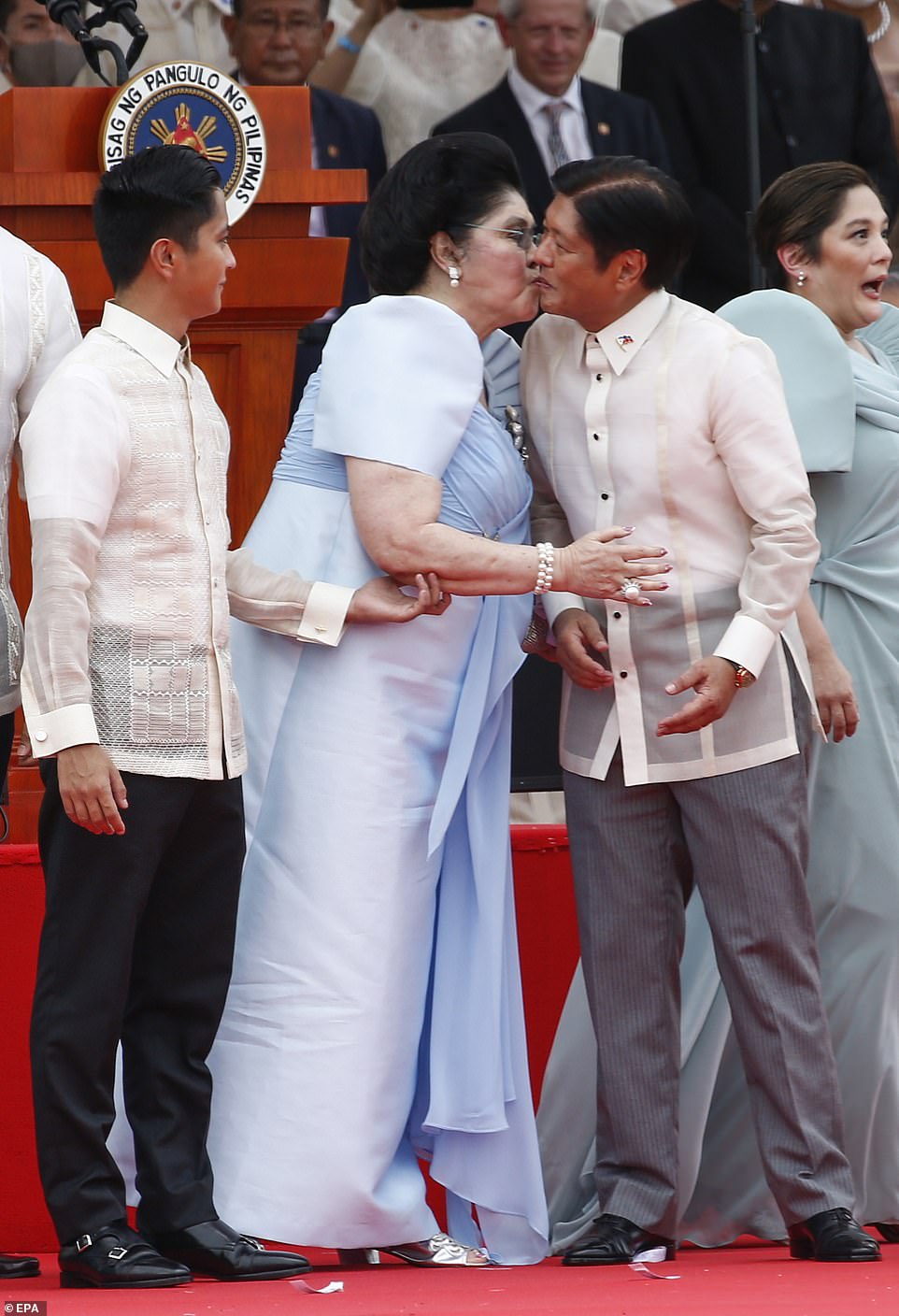 Imelda Marcos lovingly kisses her son as he is sworn into office as President of The Philippines, 36 years after her husband was deposed 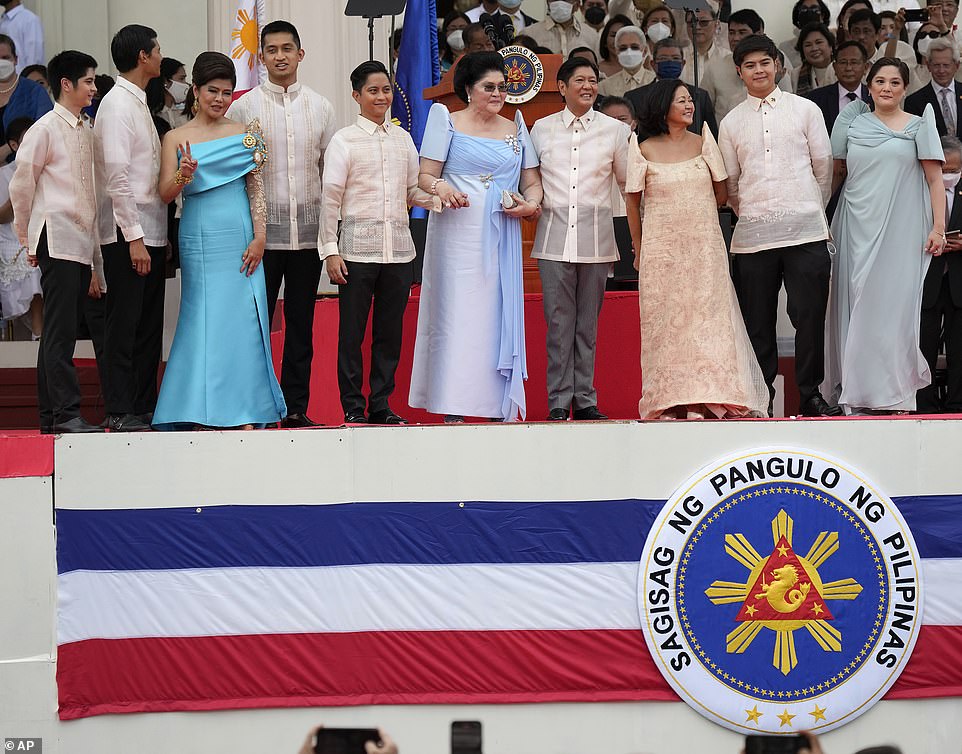 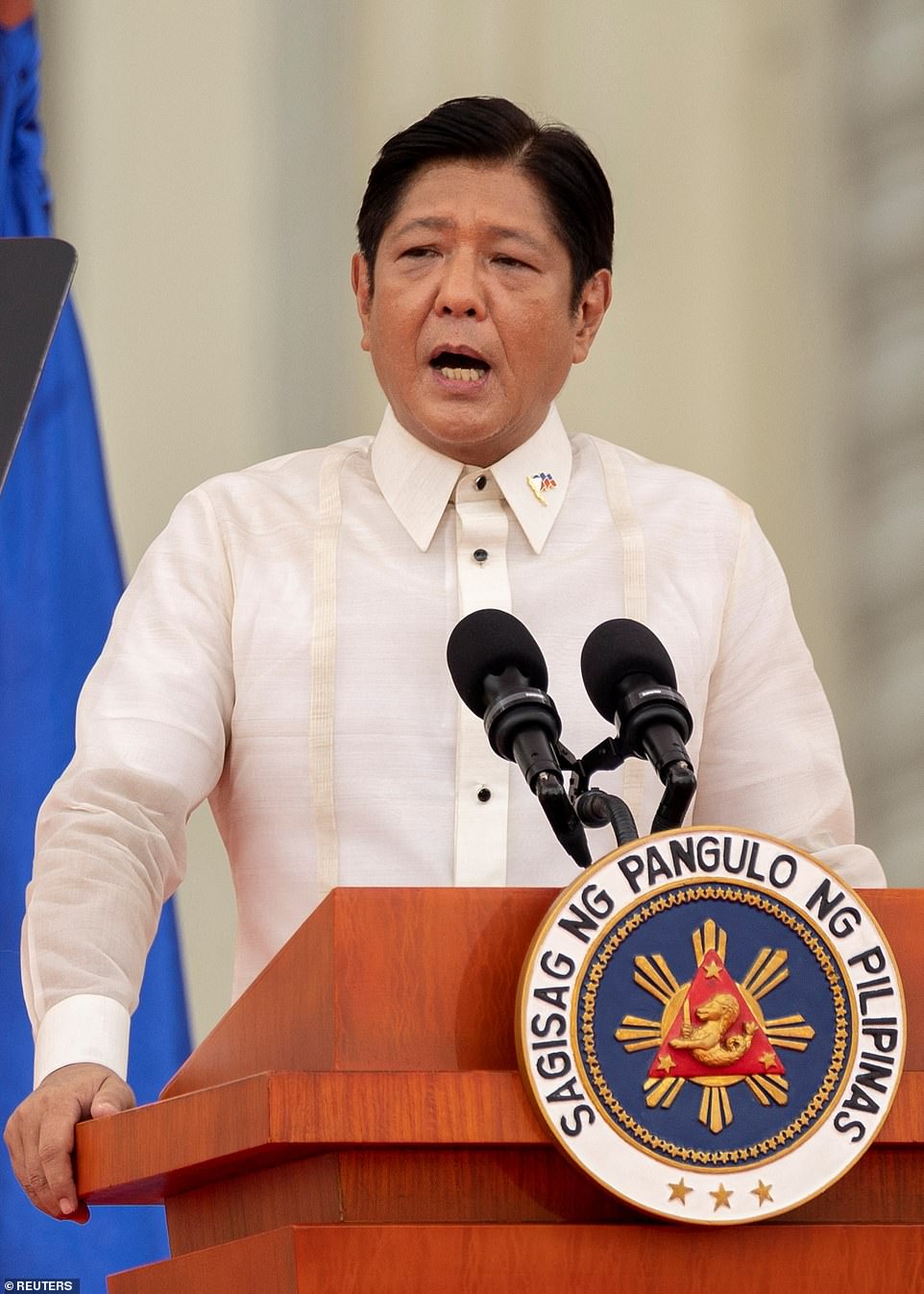 Newly-elected Philippines President Ferdinand ‘Bongbong’ Marcos Jr., the son and namesake of the late dictator Ferdinand Marcos, delivers a speech during the inauguration ceremony at the National Museum in Manila, Philippines, June 30, 2022 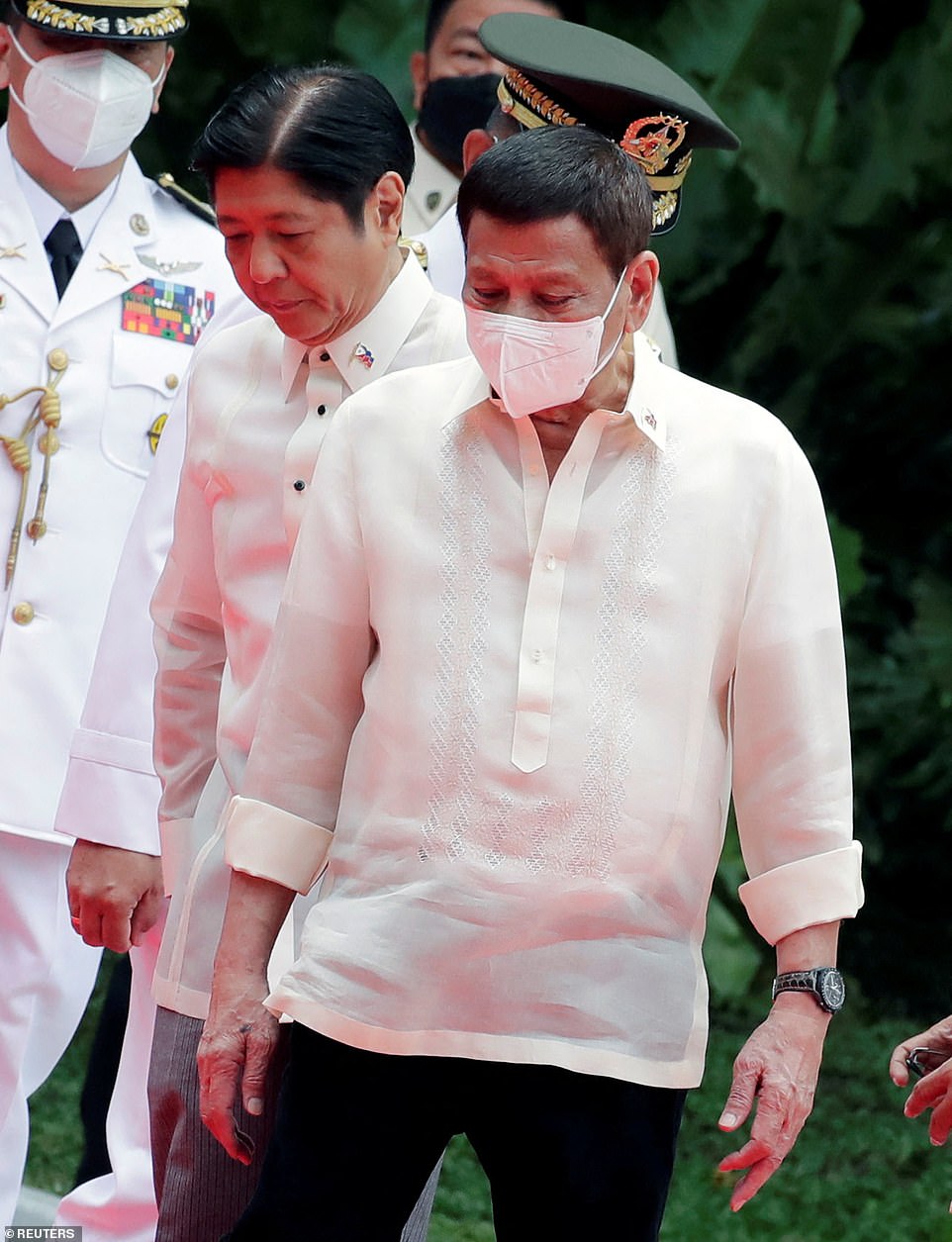 Outgoing president Rodrigo Duterte is pictured wearing a mask as he received the newly inaugurated Marcos Jr, stood behind, at today’s ceremony in Manila

1965 – After 15 years as a lawmaker, Ferdinand Marcos wins a presidential election, following a campaign portraying him as a decorated World War Two hero, claims that historians have disputed.

1972 – Marcos declares martial law to restore order and dissolves Congress, which allows him to stay in power beyond the constitution’s two-term limit. Thousands of opponents are arrested, beaten, or killed.

1981 – Martial law is lifted. A presidential election is held and Marcos wins by a huge margin, with much of the opposition boycotting.

1983 – The president’s biggest political rival, Benigno Aquino, is assassinated upon his return from exile.

1986 – Marcos wins an election thought to be fraudulent and are quickly forced to flee into exile in Hawaii, with a customs inventory that includes 22 crates of cash and millions of dollars worth of jewellery.

1991 – The Marcos family return home to face graft and tax evasion charges, but are cleared.

1992 – Imelda Marcos contests the presidency, finishing fifth out of six candidates in the first of two failed presidential runs.

1993 – The body of Marcos Sr is returned to the Philippines but is denied a burial in a heroes’ cemetery for former presidents, a decision the family challenges for years.

President Rodrigo Duterte agrees to the Marcos family’s request to bury Marcos Sr with military honours at the heroes’ cemetery.

2018 – Imelda, now aged 89, is found guilty in absentia of seven counts of corruption involving use of Swiss bank accounts, collectively worth up to 77 years in prison. She is bailed pending appeal.

2022 – Marcos Jr wins a presidential election by the biggest margin since his father’s rule and is inaugurated on June 30, 2022

In the last act of reviving the family brand, Marcos Jr took the oath in a public ceremony at the National Museum in Manila in front of hundreds of diplomats, dignitaries and supporters.

With Imelda sitting metres away, Marcos Jr praised the late patriarch’s regime, which critics describe as a dark period of human rights abuses and corruption that left the country impoverished.

‘I once knew a man who saw what little had been achieved since independence… but he got it done,’ Marcos Jr said after being sworn into office, claiming his father built more roads and produced more rice than his predecessors.

‘So will it be with his son. You will get no excuses from me.’

Ahead of the swearing-in, Duterte received Marcos Jr at the riverside Malacanang presidential palace, from which the Marcos family fled into exile 36 years ago.

Duterte, 77, wore a mask and a traditional formal shirt, characteristically unbuttoned at the top and with sleeves rolled up, for the meeting with Marcos Jr, who he once described as ‘weak’.

The ceremony comes days after the Supreme Court dismissed final attempts to have Marcos Jr disqualified from the election and prevent him taking office.

As rising prices squeeze an economy already ravaged by Covid-19, Marcos Jr has made tackling inflation, boosting growth and ramping up food production his priorities.

He has taken the rare step of appointing himself agriculture secretary to lead the overhaul of the problem-plagued sector.

He promised Thursday that ‘we will go very far under my watch’, but has offered scant detail on how he will achieve his goals and few hints about his leadership style after largely shunning media interviews.

Crucial to Marcos Jr’s success was an alliance with Duterte’s daughter Sara, who secured the vice-presidential post with more votes than him, and the backing of rival dynasties.

Many expect Marcos Jr will be less violent and more predictable than the elder Duterte, but activists and clergy fear he could use his victory to entrench himself in power.

‘Marcos Jr’s refusal to recognise the abuses and wrongdoings of the past, in fact lauding the dictatorship as ‘golden years’, makes him very likely to continue its dark legacy during his term,’ leftist alliance Bayan warned.

Marcos Jr, who previously distanced himself from his father’s rule but not criticised it, urged the gathering on Thursday to not look ‘back in anger or nostalgia’.

He filled most cabinet positions with the mass swearing-in at the palace today, but the most influential adviser during his six-year term will likely be his wife, Louise, who is widely believed to have run his campaign.

Sergio Ortiz-Luis, president of the Employers Confederation of the Philippines, said the country had a ‘big chance that we can be moving forward and ahead of the pack’ under Marcos Jr.

‘We are very optimistic on the quality of the leadership that we have now,’ Ortiz-Luis told AFP.

Unlike Duterte, who pivoted away from the United States towards China, Marcos Jr has indicated he will pursue a more balanced relationship with the two superpowers.

Marcos Jr said last month he would adopt a ‘friends to all, enemy to none’ foreign policy.

But he insisted he would uphold an international ruling dismissing Beijing’s claims over the resource-rich South China Sea.

While he has backed Duterte’s drug war, which has killed thousands of mostly poor men, he is not likely to enforce it as aggressively.

‘I think the Philippine political elite are ready to move on from a violence-led drug war,’ said Greg Wyatt of PSA Philippines Consultancy. 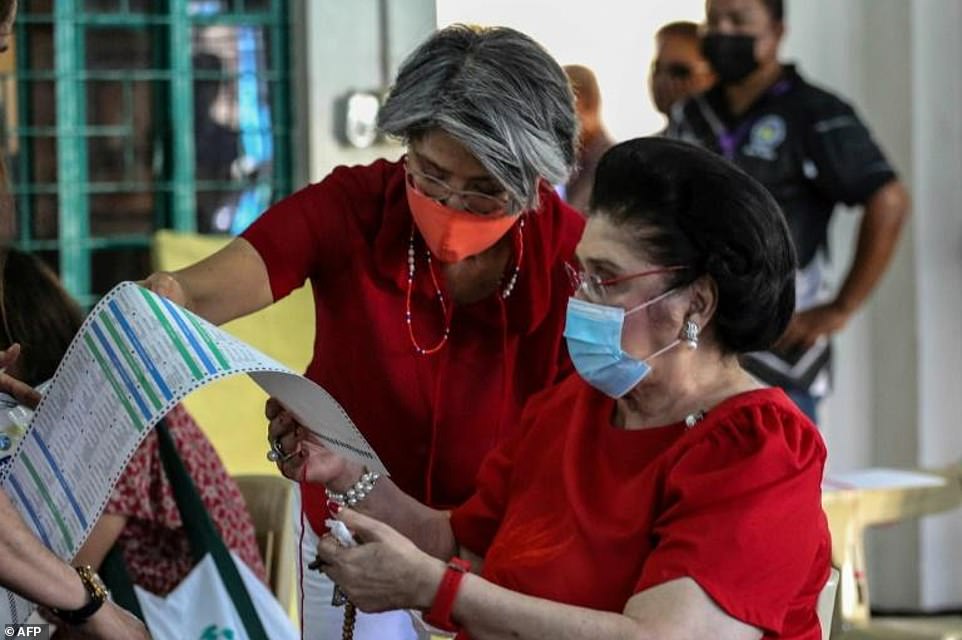 Imelda Marcos (shown here voting in the May 2022 election), the mother of incoming Philippine president Ferdinand Marcos Jr, was a powerful first lady before her husband was ousted from power in 1986 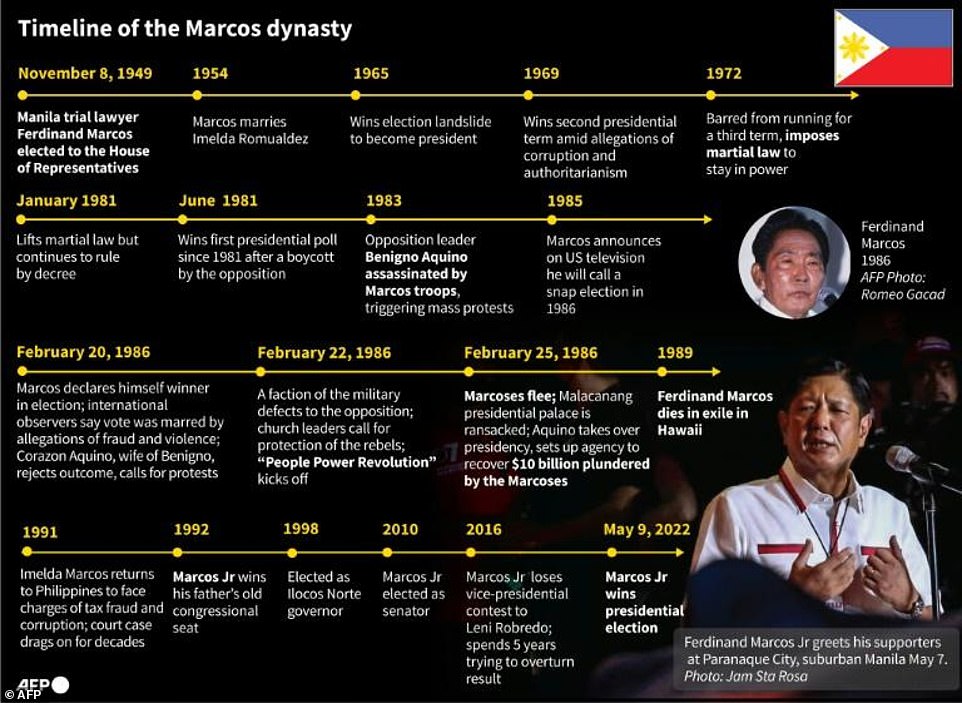 This graphic produced by AFP shows the timeline of the Marcos dynasty, beginning in 1949 when Marcos Sr was elected to The Philippines’ House of Representatives 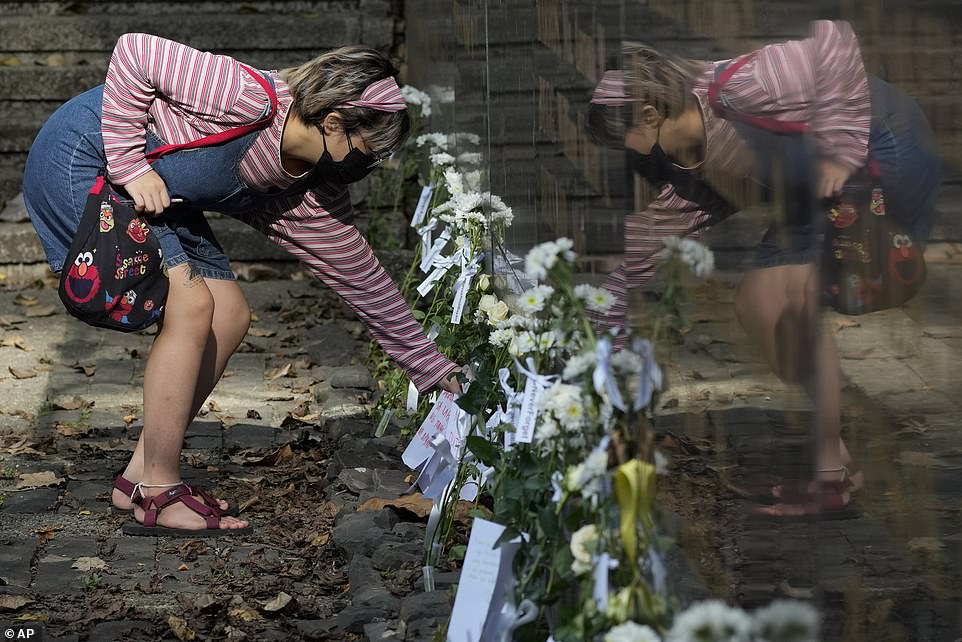 An activist lays flowers in front of a wall with names of martyrs and heroes who were the victims of the abuses of the Ferdinand Marcos Sr. dictatorship at the or Monument to the Heroes in Quezon city, Philippines

The Philippines Supreme Court on Tuesday rejected a final bid to disqualify President-elect Ferdinand Marcos from last month’s election, clearing the way for his inauguration and the return to rule of the country’s most famous dynasty.

Marcos, 64, the son and namesake of the notorious dictator overthrown in a 1986 ‘people power’ uprising, won the May 9 election in a landslide and was sworn in today for a six-year term.

‘The court held that in the exercise of its power to decide the present controversy led them to no other conclusion but that respondent Marcos Jr is qualified to run for and be elected to public office,’ the court said in a statement.

Activists had appealed to the court to overturn the election commission’s dismissal of their petitions, which sought the disqualification of Marcos before the ballot because of his decades-old tax violations, which they argued made him ineligible to run.

Thirteen justices voted to dismiss the petitions, while two did not take part, the court said.

The Marcos camp did not immediately respond to a request for comment, but has previously rejected the petitions as attempts to hobble his campaign.

Opponents of the Marcos family have been outraged by what they see as its systematic use of social media to try to alter historical narratives of plunder, opulence and state-sponsored brutality during the last era of Marcos rule.

The family and its cronies amassed an estimated $10 billion in ill-gotten wealth in the 1970s and 1980s, a government commission found. The Marcos family has denied wrongdoing and says many historical accounts of that period were falsehoods.

‘We were not surprised. That (court) decision finally put an official stamp to the restoration and rehabilitation of the Marcoses,’ petitioner Bonifacio Ilagan, who was jailed and tortured during Marcos senior’s martial law era, told Reuters.