Uffindell is set to stay in parliament and in the opposition National party room after leader Chris Luxon declared the 38-year-old was a “changed man” from a 1999 assault.

As a 16-year-old, Uffindell raided a 13-year-old’s dorm room and beat him, allegedly with bed legs, leaving him bruised and traumatised. 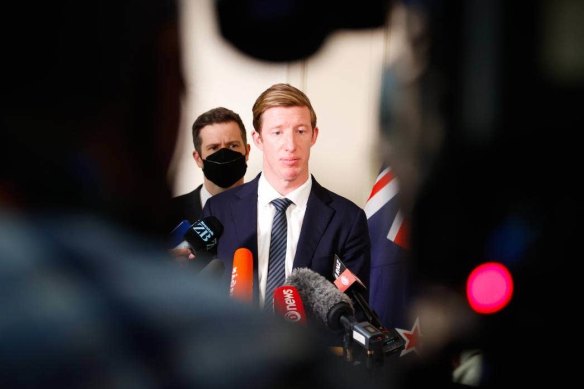 NZ National Party MP Sam Uffindell spoke to reporters on Tuesday when he admitted he “wasn’t a great person” at school. Credit:Stuff

He was expelled from Auckland’s exclusive King’s College, and did not apologise to the victim until last year.

Uffindell has appeared on every major television and radio station in the country since Stuff first reported the bashing on Monday, expressing his remorse.

“It was my action, it was my fault. It’s my responsibility. I own that and I’m trying to live my life as a responsible adult,” he told TVNZ’s Breakfast show repeatedly.

Then in an extraordinary press conference at Wellington’s parliament house, Uffindell admitted being a bully and other teenage bashings – though none of that severity – accepting he had committed a crime.

National’s Sam Uffindell was elected as MP for Tauranga in the June byelection.Credit:Kelly Hodel/Stuff

He described himself as a “16-year-old thug”, said he “wasn’t a great person” at the time and was ashamed of it.

Stuff also spoke to the former school principal who asked Uffindell to leave King’s College after the assault and he remembered the case being “open and shut”.

“As far as I’m concerned this was totally against our good behaviour [policy] at King’s,” John Taylor said. “His behaviour that night was unacceptable.”

Uffindell also admitted dishonesty by not telling National pre-selectors or voters of the assault.

“In hindsight we would have been better to get that out earlier,” he said.

“I wasn’t a great person at high school. I’m not proud of that person. I was a bully.”

Uffindell also faces charges of hypocrisy, given he campaigned on law and order issues and spoke in his maiden speech of a “growing culture of lawlessness and lack of accountability” among offenders.

“I really want to stay on as the member of parliament for Tauranga. I want to use my position to do good.”

Uffindell’s victim – who spoke anonymously to Stuff – accepted his apology at the time last year, but came forward when he saw Uffindell running for parliament and “felt sick”.

Luxon said the 38-year-old “has my backing and he has my support”.

“Sam Uffindell has changed from the 16-year-old teenager that we saw that was expelled from school 22 years ago,” he said. 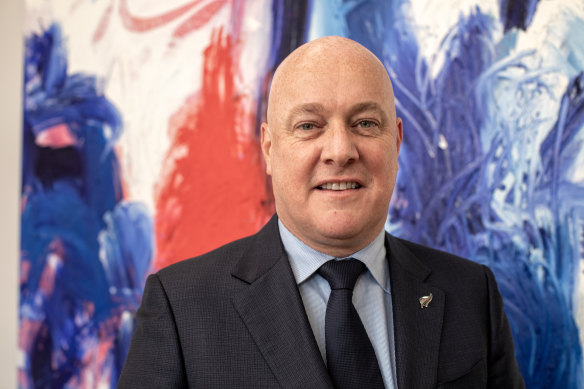 Christopher Luxon currently serving as leader of the New Zealand National Party and is the Leader of the Opposition. Credit:The Sydney Morning Herald

In the morning, Luxon said he didn’t think Uffindell’s actions constituted a crime, saying “we’re not talking about criminal behaviour”.

In the afternoon, Luxon changed his position, even though police were not involved at the time.

The party leader said he sympathised and wanted to “centre” the victim, but did not agree Uffindell should resign if that is what the victim wanted.

“My thoughts are very much with the victim. I can only imagine the hurt, the pain, the suffering, the impact of this event has had on them,” he said.

“There is no place for violence in New Zealand. No context, no setting, no excuses. We abhor it and we don’t condone it whatsoever.”

Prime Minister Jacinda Ardern declined to call on Uffindell to resign, instead calling on Luxon to show leadership.

“It is a serious situation. But as I’ve always maintained for these issues when it comes to the management of our candidates, our members, our MPs, it does come down to individual party leaders to take responsibility,” she said.