A hunt hounded by saboteurs will be hoping to ride freely on its annual Boxing Day Hunt today after they became the first to secure a temporary injunction against protesters.

The Fitwilliam (Milton) Hunt which has been running since the 18th Century, was granted a temporary injunction by a High Court judge last month and seven named protesters have agreed not to trespass.

Operators of the hunt, which has stables in Peterborough, Cambridgeshire had complained about trespass and made allegations of intimidation and harassment. 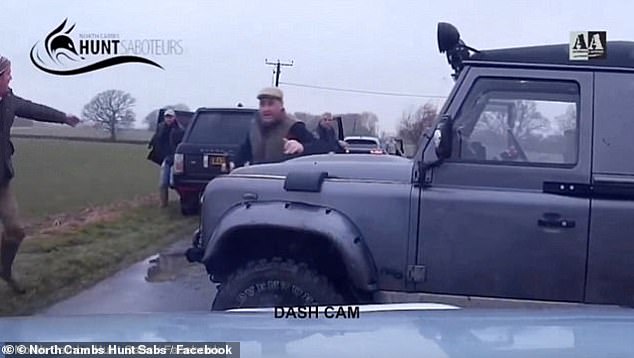 There also has been violent clashes between pro and anti hunt groups on the land.

If protesters breach the injunction today, they could be held in contempt of court and be at risk of imprisonment or a fine.

The protesters have signed legal documents  stating they will only go on public rights of way running through the Milton Hall estate in Cambridgeshire, owned by joint Master Sir Philip Naylor-Leyland.

Polly Portwin, the Countryside Alliance’s Head of Hunting, told The Telegraph: ‘The Fitzwilliam Hunt have been forced to take action through the courts after years of being followed around by a group of obsessive animal rights activists that persistently trespass on private land in their attempt to disrupt the hunt carrying out their lawful hunting activities.

‘The Hunting Act became law nearly 14 years ago yet animal rights activists remain obsessed with hunts and are angry that packs have maintained their infrastructure, their kennels, and their hounds. Meanwhile the support in the rural community still thrives with a quarter of a million people expected to turn out to support hunts again on Boxing Day.’

All but one protester named in the temporary injunction signed the legal agreement.

Protesters signed the agreement in exchange for costs not being pursued against them.

Granting the temporary injunction, Mr Justice Freedman said that he had ‘come to the view that the evidence as a whole does lead to a concern that without protection against trespass to land’.

He said ‘there is reason to be concerned about public order disturbances’ and ‘of the possibility of injury to people as well as injury or damage to or caused by animals becoming out of control’.

The judge outlined his decision in a ruling following a High Court hearing in London in which protesters had contested the complaints of trespass.

Mr Justice Freedman said claims and counter-claims could be fully analysed at a trial and added the injunctions might be lifted following any trial. 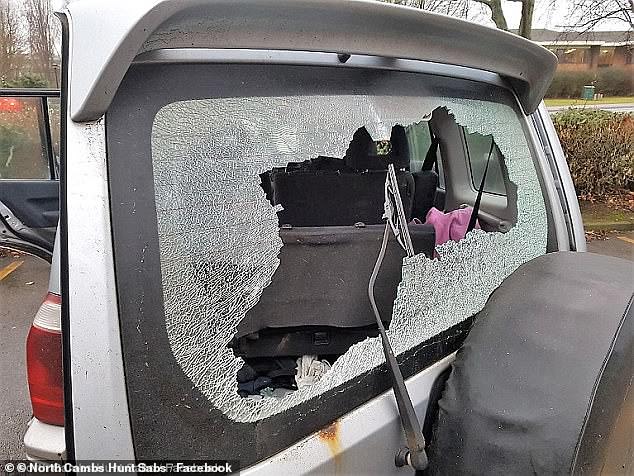 It is thought that  the injunction is the first granted since the Hunting Act came into force in 2005. The Crawley and Horsham Hunt in Sussex attempted similar action a decade ago but the case was abandoned.

In February, North Cambridgeshire Hunt Saboteurs Association were monitoring the Fitzwilliam Hunt when they were set upon by a handful of men in tweed flat caps in a narrow country lane.

Footage published by MailOnline shows the hunt saboteurs’ car surrounded by the high-powered vehicles, with one skidding in front of them to block them in, before four people jump out.

One then approaches the saboteur’s car with what appears to be a torch and smashes in several of their windows.

The decision to slap an injunction on protesters comes as saboteurs across the country have tried to force Boxing Day hunts onto private land by lobbying councils – arguing hunts breaches health and safety rules.

But the Countryside Alliance hit back by launching a campaign to protect Boxing Day meets.

It made the move after councils received detailed requests about preparations for their staging on council land.

However, pro-hunt campaigners say the health and safety tactic is a ‘cynical way of trying to stop rural people gathering and enjoying themselves at Christmas’.

Last month Grantham Labour Party told Lincolnshire Police it opposing the Boxing Day meet of the Belvoir Hunt and the mayor has now pulled out of the event.

Tetbury Town Council earlier this month declared that the Beaufort Hunt could no longer use its land after residents complained they were being forced to walk aside on narrow footpaths used by horses.

Tim Bonner, Chief Executive of the Countryside Alliance said the anti-hunt movement is ‘driven by hatred of people’, as opposed to ‘any real interest in animal welfare’.

He added hunts have been ‘hunting artificial trails on Boxing Day since the law changed in 2005’ , but activists are still obsessed with attacking them.

The Hunting Act came into force on February 18, 2005, and banned the hunting of mammals with dogs in England and Wales.