Spanish police were forced to cut an enormous sea turtle free from rope wrapped around its neck using a knife.

The creature had become entangled in rope which was attached to a mesh cage for catching octopuses.

In the distressing clip, two police officers can be seen helping the sea turtle while in a dinghy alongside it off the coast of Punta Umbria in southern Spain. 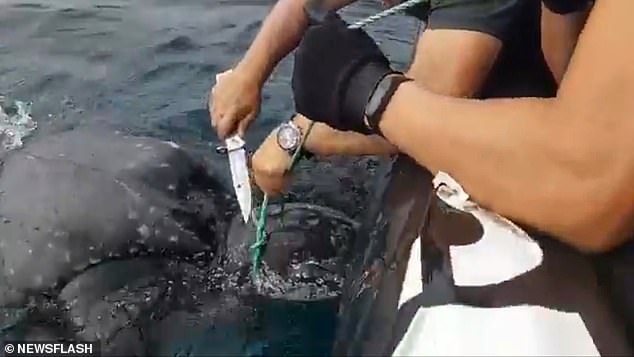 Police officers helped free the large sea turtle from rope it had become entangled in off the coast of Punta Umbria, in southern Spain

The men cut one part of the rope from around the reptile’s neck and it tries to swim away thinking it is now free.

But they continue to hold onto the end of the rope so they can use the knife to cut the remaining bit off.

Once the turtle is free they pull at the string to see what it was attached to and discover the octopus cage.

The footage was shared on Twitter by the Civil Guard and has been viewed 70,000 times. 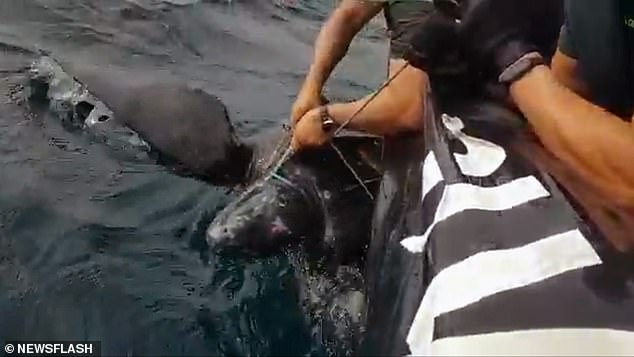 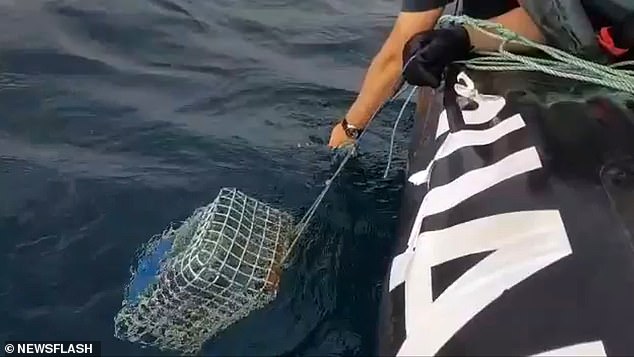 According to the Spanish newspaper La Vanguardia, the Civil Guard were called to the scene after the turtle was spotted struggling in the water with the rope tied around its neck.

The leatherback sea turtle (Dermochelys coriacea) was said to be suffering from exhaustion after struggling to free itself from the rope.

The officers said the turtle was anxious and moved erratically before they were able to cut the rope from its neck.

The Spanish Civil Guard also said that it is unusual to see this species of turtle near the coast as they are normally found in tropical regions.

The Red List of the International Union for Conservation of Nature (IUCN) categorises leatherback sea turtles, the largest of all turtles, as ‘vulnerable’.