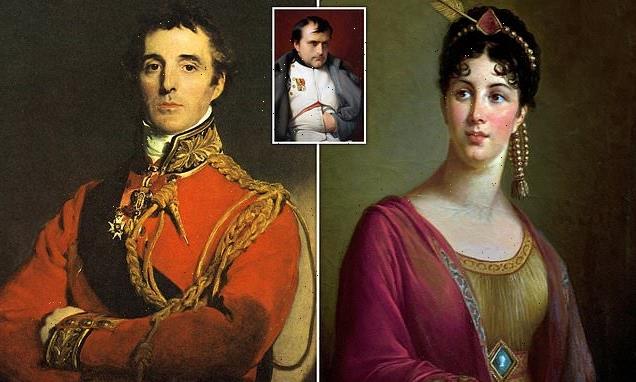 How Wellington beat Napoleon in bed as well as battle: The Iron Duke famously galloped with a string of lovers. But, as a new exhibition reveals, when he slept with the Frenchman’s mistress, it was another victory for Britain

The First Duke of Wellington — the so-called Iron Duke — was a true hero.

His achievements meant that, for decades, he was the most famous man in Europe.

Of course, his defeat of Napoleon at Waterloo in 1815 played a large part in that. And, indeed, he was a brilliant general and leader who fought in 60 battles, kept a cool head at all times and slept on a camp bed in order to be ever poised for action.

He served as Prime Minister twice, was a skilled horseman, spoke at least three languages and read avidly. He also had ‘a strong, firm body, long arms and a fine aristocratic nose’ and prided himself on keeping fit.

He could function for weeks on almost no sleep — he napped for just 48 hours during one 14-day campaign. So it’s no surprise that the Duke’s extraordinary machismo was enough to get a lot of 19th-century ladies into a bit of a lather.

A little more unexpected is the revelation that this ‘man’s man’ far preferred the genteel company of women to that of his military brethren.

According to a new exhibition of letters, journals and diaries at Apsley House, Hyde Park Corner, the grand London home of the Wellesleys (the family name of the dukes of Wellington), his closest relationships were with women. 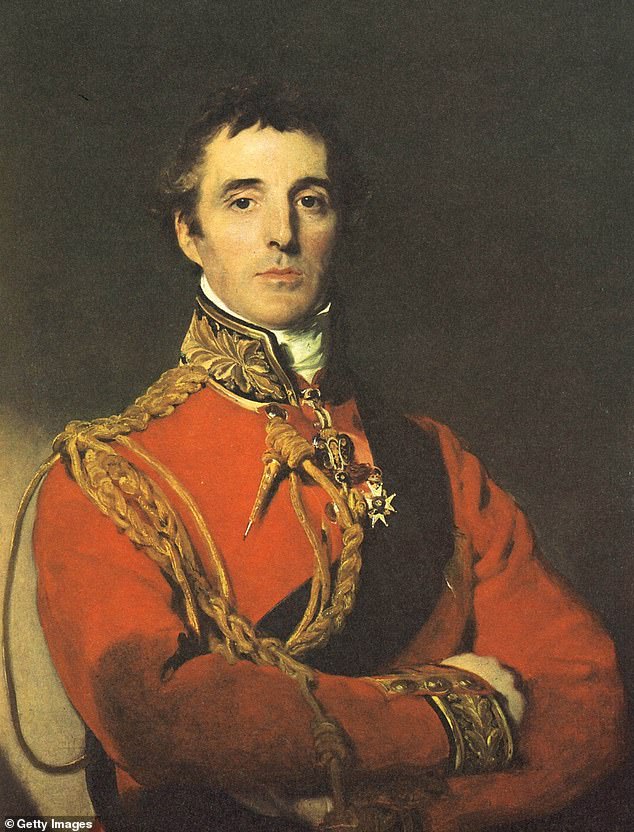 A portrait of Arthur Wellesley, the First Duke of Wellington, in military uniform. He served as Prime Minister twice, was a skilled horseman, spoke at least three languages and read avidly

He loved their opinions, their brains and their outlook, apparently. But he also loved women’s bodies. Very much.

So while he maintained impressively platonic relations with a clutch of his favourites, he adopted a rather different approach with dozens of others, sleeping with everyone from princesses to prostitutes, opera singers to duchesses, with a particular penchant for married women.

No wonder he was known Europe-wide as ‘the Rutting Stag’.

In fact, the only woman he didn’t seem to think much of was his wife, Kitty Pakenham, whom he first met in the mid-1790s.

Kitty was pretty, vivacious and from a very rich Anglo-Irish family, but Wellington — born Arthur Wesley, fourth son of the Earl of Mornington — was deemed to be below her status. He was rejected by her family as a poor prospect.

So off he went to serve with the Army in India, where, while enjoying several fleeting affairs and pursuing his enthusiasm for other men’s wives, he cherished a romantic picture of the youthful Kitty for 12 long years.

When he finally returned — a triumphant general with a growing personal fortune — he asked again for her hand in marriage and her family agreed like a shot. But Arthur discovered to his horror that, in the intervening years, Kitty had rather lost her bloom.

‘She has grown ugly, by Jove!’ he is reported to have said to his brother before the marriage.

He also had no interest in her intellect, once commenting — as recorded in documents kept by his confidant, the diarist and political hostess Harriet Arbuthnot — that ‘discussing political or important subjects with her [Kitty] was like talking Hebrew to her’. 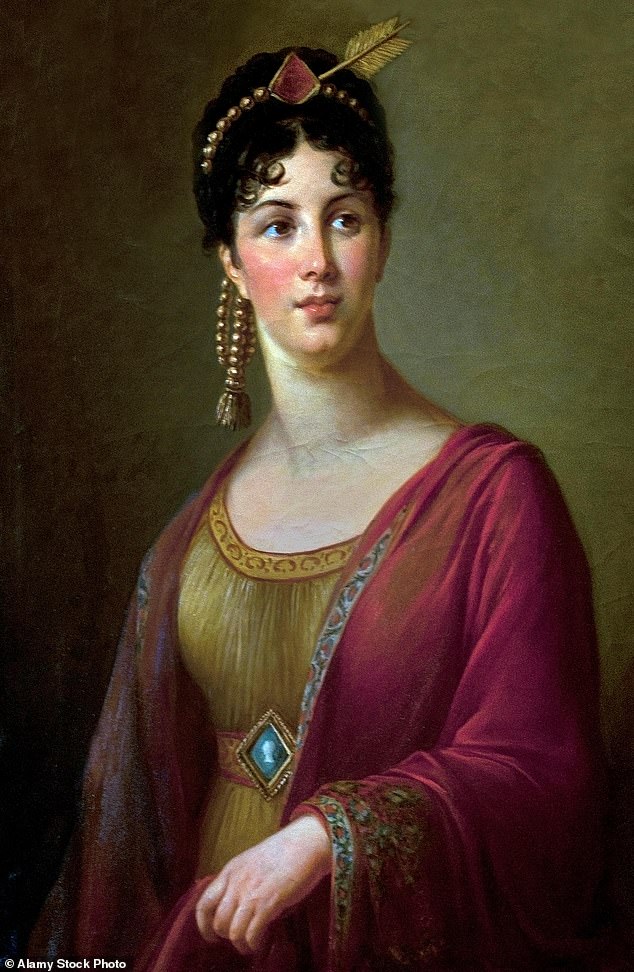 To be fair, poor Kitty — who loved him at least as much as all his other women did, but found him intimidating — wrote to her fiance just before their wedding in April 1806, saying: ‘I don’t think I am going to be a companion for you and a friend for life.’

But they married and, despite having two sons, almost immediately forged separate lives.

She wandered about their Hampshire home in a nervy depression while he continued to live life to the full, running up vast bills with a London courtesan, Madame Derville.

In one, sent just before he was dispatched to Spain to fight Napoleon in 1808, he appears to have been charged £55 13s — the equivalent of several thousand pounds today — for 15 visits to a brothel, including a dalliance with an ‘American lady’ who cost a full £10 and a Mrs Dubois who was described as ‘La Grande Blonde’.

His success in his career and with women surprised his family.

Born in Dublin in May 1769, Arthur Wesley (the family changed their name to Wellesley in 1798) showed little promise, according to his exacting mother. ‘I don’t know what I shall do with my awkward son Arthur,’ she would say.

He hated school and after several unhappy years at Eton and an unexpected plunge in the family finances, he was sent to Brussels to continue his education, where, until his early 20s, he showed no sign of distinction.

It was only after joining the Army in 1787 that he found his calling, leading the British, Portuguese and Spanish forces during the Peninsular War (1808 to 1814) and finally forcing the French to withdraw from Spain and Portugal.

On his triumphant return, he was given the title Duke of Wellington and, in 1815, was victorious at Waterloo.

Prior to the battle and in Brussels, where he assumed command of the forces that would challenge Napoleon, he found time for dalliances.

Between assembling men, arms and supplies and fine-tuning his military strategies, he attended dinners and soirees and conducted affairs with some of the loucher ladies in town.

As Lady Caroline Capel wrote on June 2, 1815: ‘The Duke of W. has not improved the morality of our society, as he has given several things [parties] and makes a point of asking all the ladies of loose character.’ 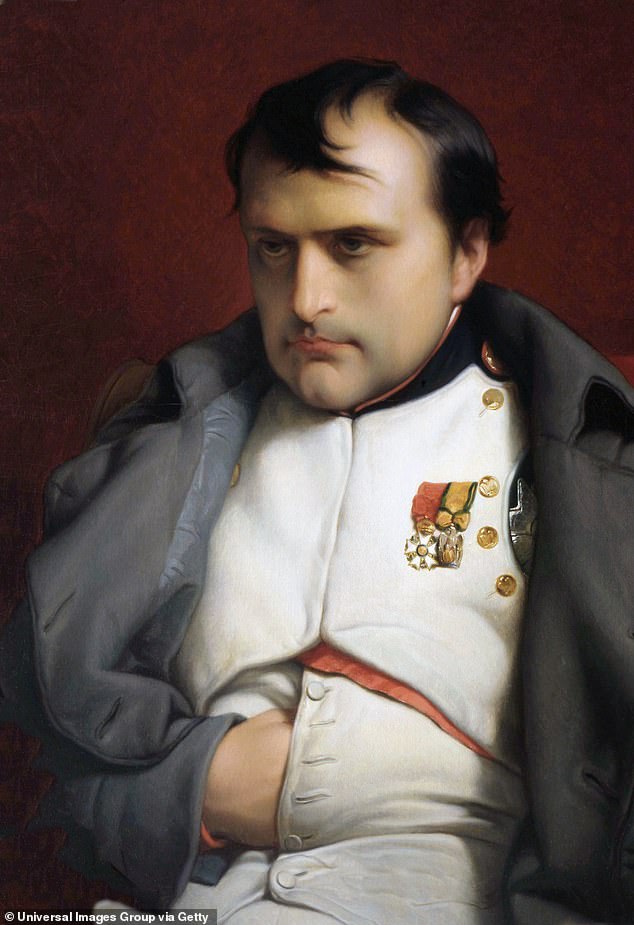 A portrait of Napoleon Bonaparte, who was defeated by the Duke of Wellington at Waterloo in 1815

To add insult to injury, the Duke seduced two of Napoleon’s former mistresses — an Italian opera singer, Giuseppina Grassini, and the actress Marguerite-Josephine Weimer, known as Mademoiselle Georges, who declared that, compared with Napoleon, the Duke was ‘by far the stronger’.

With his military triumphs came a slew of honours and titles, and in 1828 he was made Prime Minister. It only burnished his appeal to other men’s wives.

His long list of rumoured ‘friendships’ included Lady Caroline Lamb and Lady Frances Wedderburn-Webster (both of whom supposedly had affairs with Lord Byron) and even his future sister-in-law, Marianne Patterson.

It was his romantic friendship with Harriet Arbuthnot, however, that stayed the course. In letters to her, he expressed his deep regret at his marriage.

‘Would you have believed that anybody could have been such a damned fool? I was not the least in love with her.’

While Wellington fought and philandered, Kitty hid at home, where everything from her unkempt, greying hair to her poor household management drove him to a frenzy.

He wanted a glamorous society hostess bobbing on his arm, with wit and personality to match his own.

Kitty, raised by her dreary Calvinist mother to believe that any ostentation was wrong, eschewed the diamonds and feathers her husband’s lovers sported. She wore the same clothes for years — plain white muslin — and refused to wear a wig.

At gala dinners at their Hampshire pile, she would sit with her sons’ tutors rather than with visiting dignitaries.

‘She’s more like a shepherdess than a duchess,’ the Duke would gripe. But, of course, he was partly to blame. His lack of love and attention, and the endless affairs, chipped away at her confidence, health and self-esteem.

One of her diary entries sums it up: ‘So uninteresting and so unvaried is my life that to keep a daily journal is almost impossible.’

After Kitty died in 1831, Wellington continued to enjoy the company of women, who rejoiced in his presence.

Even at 77, he so transfixed 32-year-old Angela Burdett-Coutts that she proposed to him.

He declined, telling her in a letter ‘not to throw yourself away on a man old enough to be your grandfather’.

Perhaps the only occasion in the Iron Duke’s life when he said no to a woman.