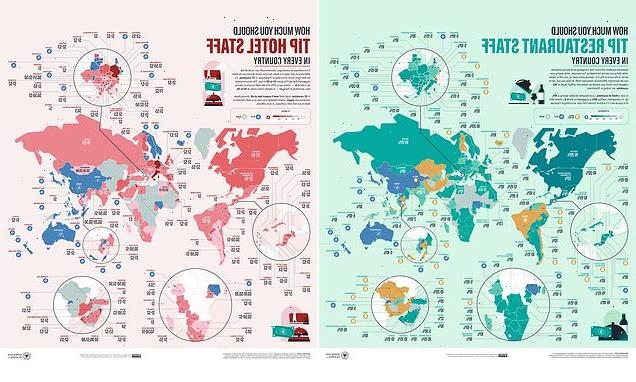 How much you should tip in restaurants, cabs and hotels around the world in maps – it’s insulting to expect one in Australia and Japan and NO surprises for guessing where you have to fork out the most

Maps showing variation in tipping norms across the globe reveal that in Australia and Japan tips are not required, and that expectations are routinely highest in the US.

In the US a 20 percent tip is the standard when visiting a restaurant, whereas in the UK, Germany and Netherlands they tend to be around 5 to 10 percent, according to the maps, created by HawaiinIslands.com using TripAdvisor’s tipping guide.

Also worsening matters for US consumers is the rise of digital payment systems on tablets that play into guilt and embarrassment by offering larger suggested tips in situations and establishments where tipping was not customary in the past. 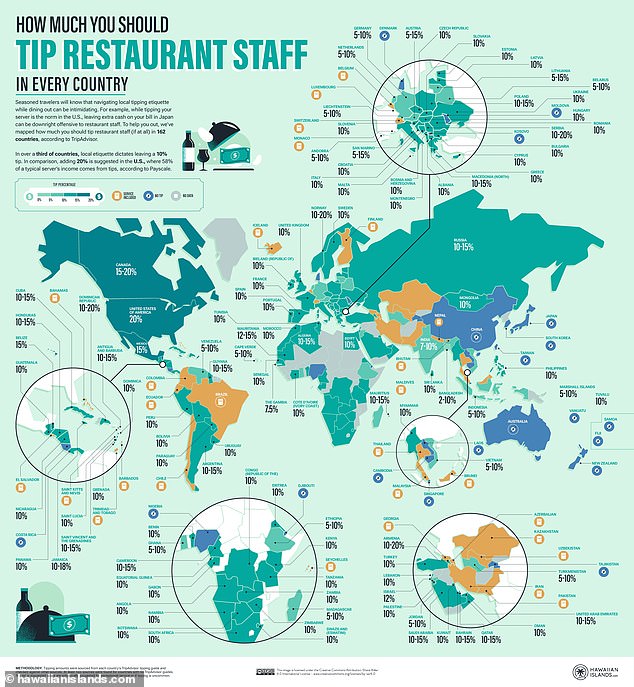 In 66 countries it is the norm to leave a 10 percent tip, as is the case in much of Europe 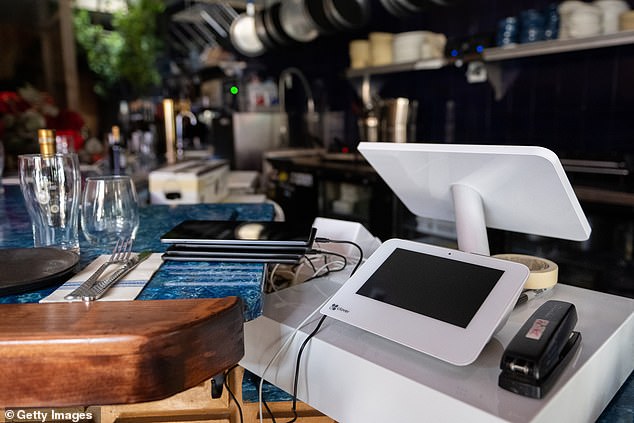 The rise in digital payments, in part sped up by the pandemic, has seen touch screen kiosks encouraging both larger tips and tips in establishments like bakeries and coffee shops

When dining in European restaurants it is the norm that a tip is given using spare coins or increasing payment to the nearest round number.

In the US, however, the tip is more often viewed as a fixed percentage of the bill, and that percentage has been on the rise.

In the early 1970s, tips rose from 10 to 15 percent at finer establishments and it has been increasing ever since.

Recent changes, according to the New Jersey State Policy Lab in Rutgers, were triggered by the rise of recommended tips on electronic screens and the COVID-19 pandemic.

Some of those machines have restaurant owners asking for as much as 30 or 35 percent. Machines inviting customers to pay a tip are also becoming common in establishments where tips weren’t expected before, like coffee shops and bakeries. 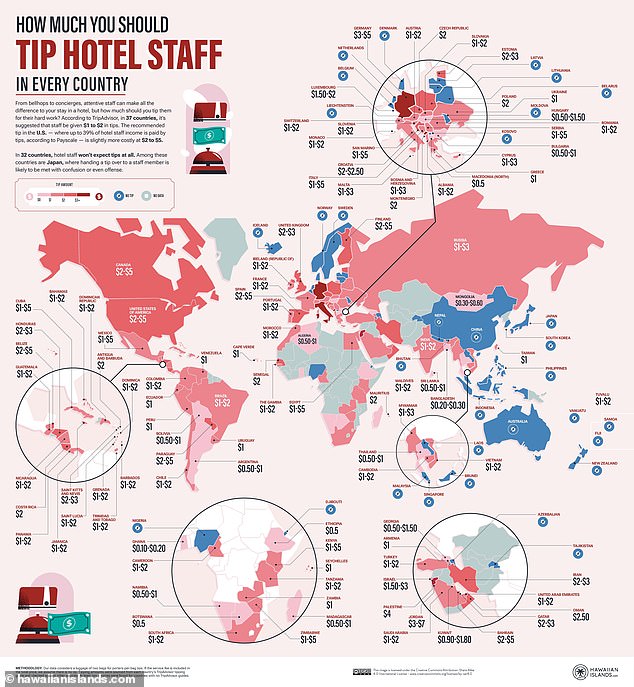 Similar trends can be seen among tipping expectations among hotel staff, where in Australia, Japan, Norway and Sweden no tips are expected, but in the US and Canada the highest tips are expected – a flat $2 to $5.

US taxi drivers expect to receive tips of around 15 percent whereas across Europe 10 percent is normal, according to the maps. It is the only country in the world where such a high tip is standard.

The phenomenon of tip inflation in North America is widely attributed to the death of the physical tip jar.

‘Over the last few years, we’ve seen the emergence of these digital kiosk systems that are very interactive in nature. Digital interfaces allowed companies to give the option to give tips.

‘And companies figured out that this is a good way to get people to pay more,’ Dipayan Biswas, a marketing professor at the University of South Florida, told NPR last month. 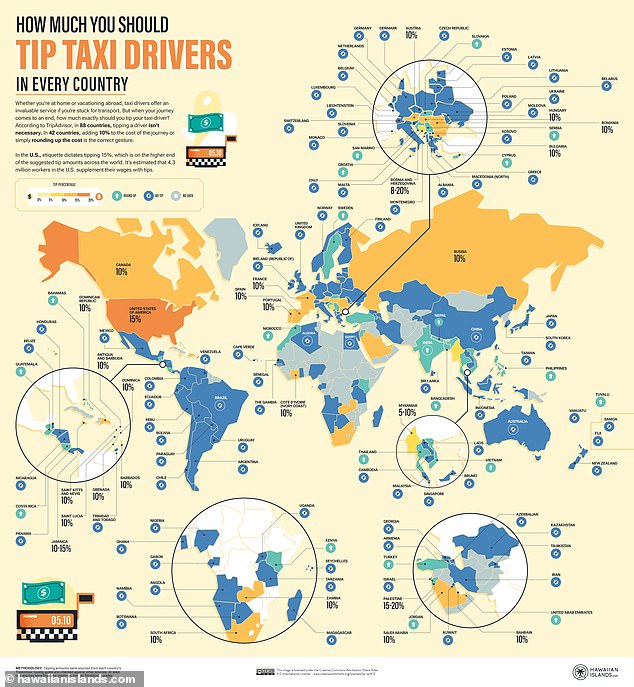 The pandemic also caused a shift in tipping tendencies and expectations because customers were encouraged to tip generously to help keep restaurants and stores afloat.

It also sped up the adoption of digital payment systems as business owners were encouraged to go cashless to limit the spread of the virus.

Tips are embedded into the US economy and society as a whole, as servers in 43 states receive sub-minimum wages before they are tipped, according to a report from PayScale.

But digital payments are also changing how tips are distributed to servers and employees.

Biswas added: ‘Anything paid to the digital interface goes directly to the company’s account, and it is up to the company and any contract they have in place that would determine how much of that money, if any at all, gets shared with the server or the employee.’

On top of that, companies that process these payments take a cut too. Square, one of the more popular payment systems in the US, charges 2.6 percent plus 10 cents per transaction when a customer taps or swipes their card during an in-person transaction.