Revealed: How ‘business-like’ May took it ‘in her stride’ when she was called at 10.30pm to be told she would FINALLY face a vote of No Confidence by Tory MPs after a gruelling tour of the Hague, Berlin and Brussels

Theresa May swept into Downing Street last night after a long and trying day on the continent fighting to save her Brexit deal – but she already faced a new crisis.

Rumours had started to spread like wildfire through Westminster at around 8.45pm that Sir Graham Brady, the chairman of the 1922 Committee, had finally received enough letters to trigger a leadership ballot.

Expectations rose further at 9.30pm when chief whip Julian Smith was seen rushing into No 10 – minutes before the Prime Minister’s Jaguar arrived at the back door.

Downing Street sources quickly insisted Mrs May had still not heard from Sir Graham – but the call finally came at around 10.30pm.

No 10 sources insisted to MailOnline Mrs May took the long-awaited call ‘in her stride’ and her response was another ‘just another example of how resilient she is’. 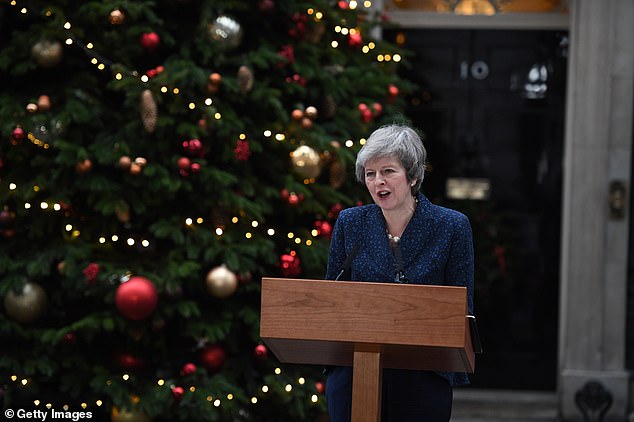 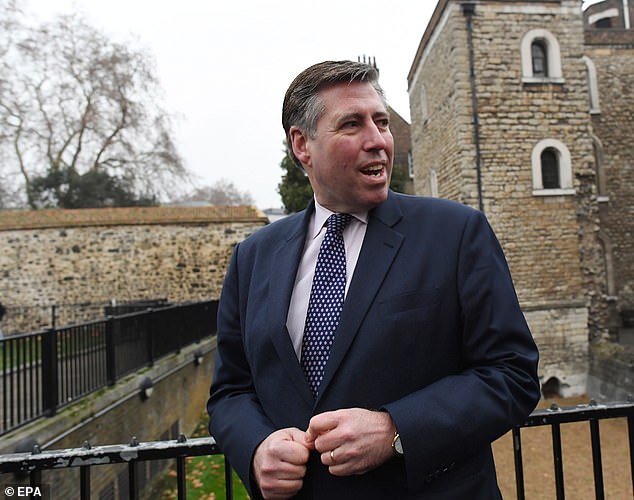 At around 10.30pm last night Sir Graham (pictured in Westminster today) spoke to the Prime Minister to say a ballot was necessary

Sir Graham’s call capped a day which had started with breakfast in the Hague with Dutch Premier Mark Rutte and took in lunchtime talks with Angela Merkel in Berlin.

Mrs May returned to London via Brussels for further meetings with Donald Tusk and Jean-Claude Juncker – finally leaving the European Commission at around 8pm for the short flight back to London.

While she was travelling, the ‘fluid’ count of letters had finally and definitively reached the crucial threshold of 15 per cent of the Parliamentary Party -meaning party rules obliged Sir Graham to speak to the PM and organise a ballot.

Letters were both submitted and withdrawn yesterday and Sir Graham admitted the number of calls and text messages had become a ‘bit silly’ over the course of the day.

But the for the first time in his eight and a half years in charge, Sir Graham set in motion a vote of confidence in the Tory leader.

He said: ‘There has been some speculation over a period of weeks about whether the threshold had been reached.

‘During the course of yesterday we reached the point it was clear the threshold had been passed.

‘I knew during the course of yesterday while the Prime Minister was overseas.’

Sir Graham said the PM was ‘business like’ on the call and agreed with Mrs May the contest should be called urgently. Plans were swiftly made for a ballot tonight.

He said: ‘The rules are quite explicit that should the threshold be reached, I need to confirm and consult with the leader of the party on organising a ballot as soon as reasonably practical in the circumstances.

‘The implication is clear that it should be done promptly.’ 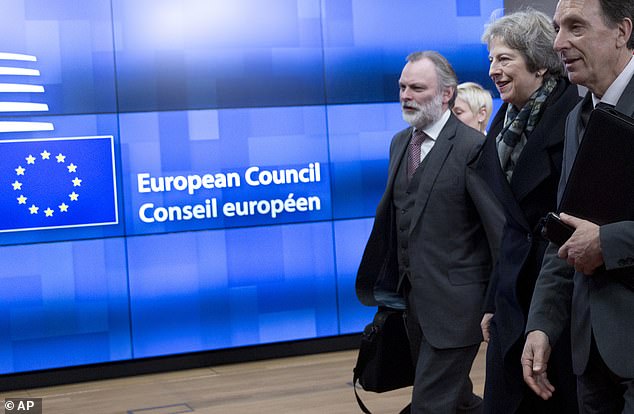 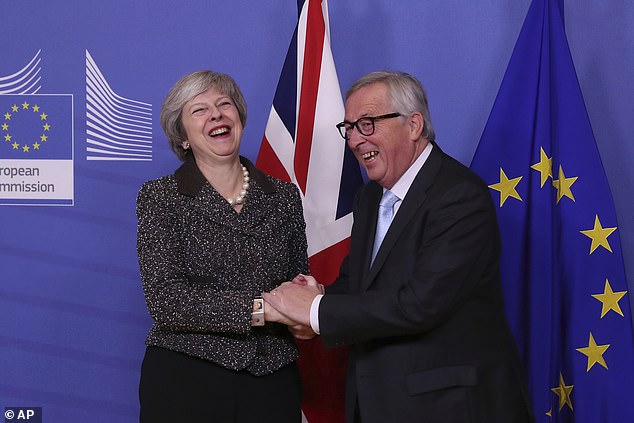 Had it been recess or there been some kind of emergency, it may have been sensible for Sir Graham to wait before calling the ballot.

But in a week where Tory MPs were under a three line whip to be in the Commons he said it ‘was unlikely a large number of colleagues were planning to be travelling around the world’.

How can Theresa May be ousted as Tory leader?

A Tory leadership contest can be called in one of two ways – if the leader resigns or if MPs force and win a vote of no confidence in them.

It is not the same as a vote of confidence in the government – which happens on the floor of the Commons and involves all MPs.

Calling votes of no confidence is the responsibility of the chairman of the 1922 Committee, which includes all backbench Conservative MPs.

Chairman Graham Brady is obliged to call a vote if 15 per cent of Tory MPs write to him calling for one – currently 48 MPs.

The process is secret and only Sir Graham knows how many letters he has received.

Once triggered, the ballot can be organised very quickly.

The no-confidence vote is purely on whether the leader should stay in place or not, rather than a contest.

Crucially, if the incumbent receives more votes in support than opposed they cannot be challenged for 12 months.

The procedure was last used in 2003 when Iain Duncan Smith was removed as Tory leader.

If the leader is ousted, they typically remain as Prime Minister until a successor is appointed and ready to be confirmed by the Queen.

Any MP – apart from the ousted leader – is eligible to stand in the subsequent contest.

Conservative MPs hold a series of ballots to whittle the list of contenders down to two, with the lowest placed candidate dropping out in each round.

The final two candidates are then offered to the Tory membership at large for an election.

Some activists have called for changes so it is easier for contenders to reach the final stage.

They have suggested that the membership should get to choose between any candidates who get support from at least 20 other MPs.

A decision was taken to make a formal announcement before the markets opened in London.

A press release was rapidly drawn up – so rapidly it included an embarrassing spelling mistake, labelling Sir Graham the ‘Chairmam’ of the 1922 – and dropped on Westminster at about 7.40am.

It announced a ballot of Conservative MPs would be held tonight, between 6pm and 8pm, after a ‘clear day’ for the party to consider its implications.

The Government strategy was immediately made clear as Justice Secretary David Gauke told the Today programme the PM would continue ‘even if she just wins by one’.

Inside No 10, Mrs May cancelled plans to travel to Ireland for Brexit talks with Leo Varadkar and also shelved a Cabinet meeting for this afternoon.

At 8.45am, the Prime Minister appeared in Downing Street to address the nation – standing behind a podium with no Government crest in acknowledgement of the party political crisis engulfing her.

Mrs May vowed to ‘contest that vote with everything I have got’ and warned those trying to oust her leadership election would ‘put our country’s future at risk’.

She insisted she would stay on to ‘finish the job’ she has set herself as Prime Minister and warned the rebels threatened Brexit itself.

Mrs May struck a defiant tone at PMQs at noon and will address Tory MPs behind closed doors when the 1922 Committee meets in committee room 14 at 5pm.

Voting on her future begins at 6pm and after the secret ballot ends at 8pm, Sir Graham will count the votes next door with vice-chairmen Dame Cheryl Gillan and Charles Walker – with the result due by 9pm.

The rules of today’s ballot mean any MP who is away from London can inform Sir Graham of a proxy to cast their ballot by 4pm.

Tory Chief Whip Mr Smith will confirm the number of eligible MPs before the vote begins – it will include all MPs who take the Conservative whip, including Sir Graham himself, Mrs May and deputy speaker Eleanor Laing.

It could also include independents Charlie Elphicke and Andrew Griffiths were the whip restored today.

A further potential complication is Craig Mackinlay who could receive a verdict in his election expenses trial today. 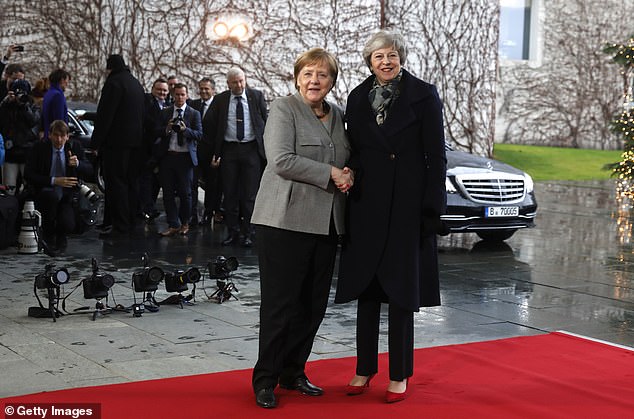 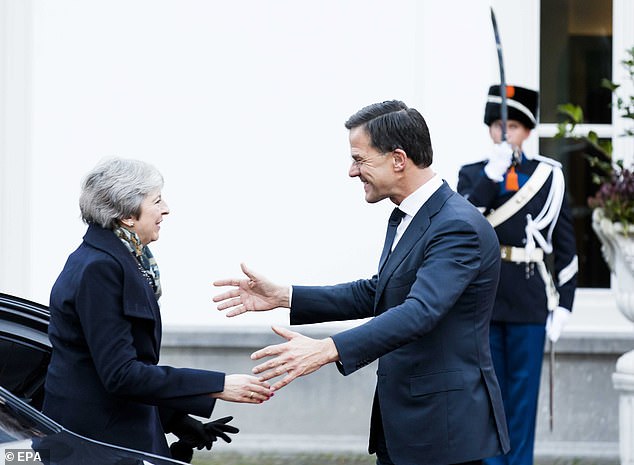 If Mrs May loses and a leadership election is necessary, events will move quickly.

Sir Graham said: ‘I would anticipate in the event it becomes necessary we would all want to make this decisions rapidly.

‘It would be my intention the 1922 Executive would meet tomorrow (to set a timetable). The Party Board is meeting tomorrow.’

Sir Graham said in practice the first round of the contest could be concluded within days as the exhaustive ballots could happen on consecutive days – or even conceivably with more than one ballot a day.

Tory MPs will face a practical deadline of next Thursday to whittle down contenders to two so party members can choose a new leader during the Christmas holidays.

Theresa May is battling for her political survival today as Tory rebels have triggered  a vote of confidence in her premiership.

If she wins, she will stay on as Tory leader and Prime Minister to finish the Brexit talks and try to get a deal over the line.

And if she loses, she would have to stay on in Number Ten for weeks as a ‘zombie’ Prime Minister for some weeks until her warring party pick a fresh leader.

Why is Theresa May facing a confidence vote?

The contest has been triggered because at least 48 Tory MPs have sent letters of no confidence into Sir Graham Brady, chairman of the 1922 Committee – the body which represents Tory MPs.

Sir Graham is obliged to call a vote if 15 per cent of Tory MPs write to him calling for one – currently 48 MPs.

How will today’s vote take place?

The confidence vote will be held between 6pm and 8pm tonight. Tory MPs vote by casting their secret ballots in a box which will be placed in a room in Parliament, and they can only vote for these two hours.

How many MPs does Theresa May need to win?

There are 315 Tory MPs who are eligible to vote, and the PM needs a simple majority to stay on as leader – meaning 158 is the magic number.

What happens if Theresa May wins?

If Theresa May wins today then she cannot face a fresh challenge for another 12 months – meaning that she can stay on and finish Brexit.

Mrs May has vowed to stay on as leader if she win’s tonight’s vote by just one, but her critics on the Tory backbenches have warned that if 80 or more MPs vote against her, her position as PM will be untenable.

What happens if Theresa May loses?

If Theresa May loses she must resign as Conservative party leader and is barred in standing for the leadership contest.

But she will have to stay on as Prime Minister while warring Tory MPs decide who her successor will be – leaving her a ‘Zombie’ leader.

She faces the humiliating prospect of being defeated tonight but having to travel to Brussels tomorrow for a crunch EU summit where Brexit is on the agenda.

Or she could quit immediately and hand over to a caretaker leader – with her de facto deputy David Lidington tipped to be the man to fulfill this role.

How does the Tory leadership contest work?

Any MP – apart from the ousted leader – is eligible to stand in the subsequent contest.

Conservative MPs hold a series of ballots to whittle the list of contenders down to two, with the lowest placed candidate dropping out in each round.

The final two candidates are then offered to the Tory membership at large for an election.

It is widely believed that the Brexiteer candidate will be the winner if it goes to a vote of the overwhelmingly Eurosceptic membership.