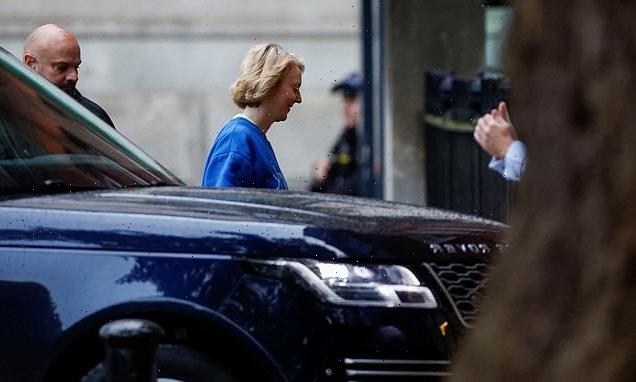 How Liz Truss be removed from power THIS WEEK: Tory MPs could force rule change, she could be talked into quitting by senior ‘grey suits’, ministers could walk out or she could lose Commons confidence vote

Liz Truss’s premiership appears to be on borrowed time after just 40 astonishing days, but there is no easy, straightforward way for her to leave or be forced out of No10.

Due to the astonishingly short term she has so far served, the usual Conservative Party rules don’t apply.

Normally MPs can submit letters of no confidence and if they reach the threshold – 15 per cent of Tory MPs – then a vote is called. If the PM loses that vote they are out.

But current party rules mean a new leader has a year’s grace period before they can face a confidence vote.

Jeremy Hunt will take a wrecking ball to the ‘lame duck’ PM’s economic policies today in a desperate bid to calm the markets – as Tories warn she must be gone in days.

In an extraordinary 6am statement, the Treasury said the new Chancellor will announce an overhaul of the disastrous mini-Budget within hours rather than waiting until Halloween.

He is expected to ditch plans to knock 1p off the basic rate of tax, one of the PM’s flagship measures, but there is speculation he will go much further. Some believe he will reverse stamp duty reductions, with only the cut to national insurance looking safe – as legislation has all-but cleared Parliament.

So how could she be removed? 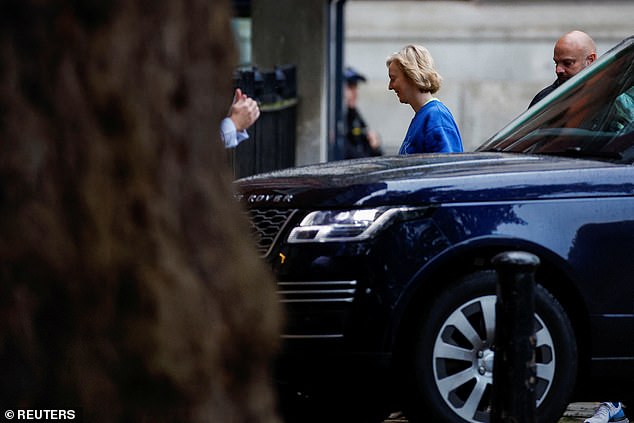 Due to the astonishingly short term Ms Truss has so far served, the usual Conservative Party rules don’t apply. 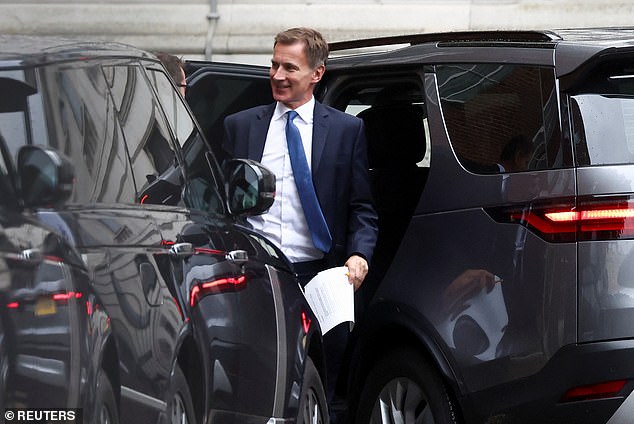 Jeremy Hunt will take a wrecking ball to the ‘lame duck’ PM’s economic policies today in a desperate bid to calm the markets – as Tories warn she must be gone in days. 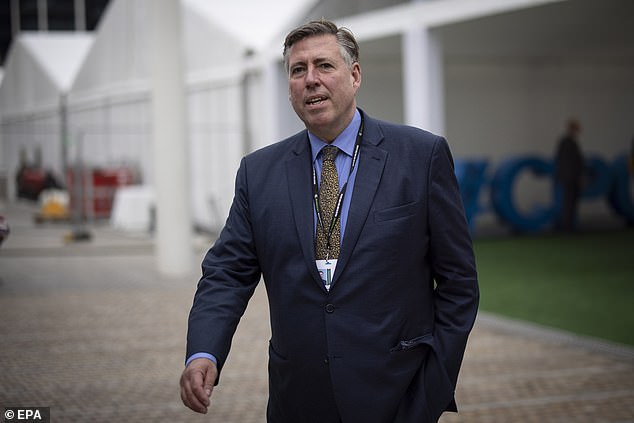 One way to get around the current party rules is to simple change them.

Party management is run through the 1922 Committee, the organisation of backbench MPs. Its 18-strong executive is led by chairman Sir Graham Brady.

This executive could vote to alter the rules regarding no confidence votes, allowing a challenge, if they feel that there is enough of a clamour for it to be done.

Mutinous backbench MPs are pressing Sir Graham Brady to change party rules to allow an immediate vote of confidence in her leadership.

He was said to be resisting an immediate putsch, arguing that the PM and Chancellor Jeremy Hunt deserve the chance to set out their economic strategy in a Budget on October 31. 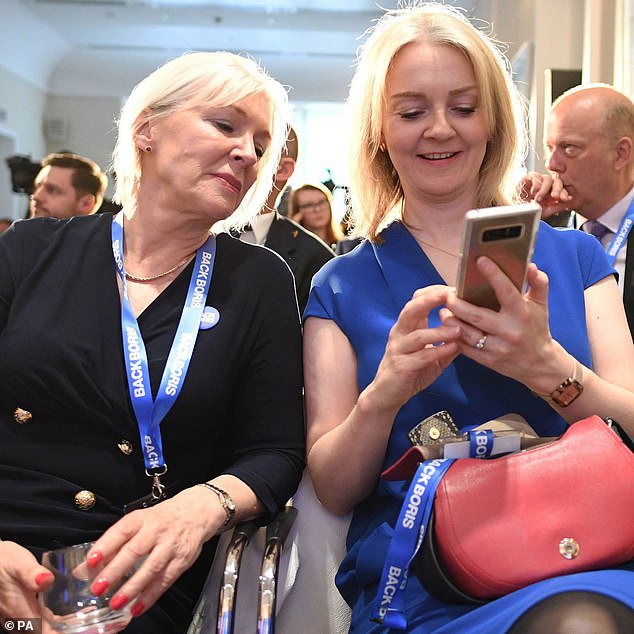 Ex-minister Nadine Dorries, suggested the rule system was a ‘laughing stock’ if it could be ignored.

However, with Jeremy Hunt bringing that fiscal statement forward to today, that grace period has disappeared.

Sources say that more than 100 MPs are ready to submit letters of no confidence, almost a third of the parliamentary party. This could force his hand and give him little choice to act.

Only three MPs have so far gone public with their letters, but only Sir Graham knows the real total – and he doesn’t even tell his wife.

Ex-minister Nadine Dorries, suggested the rule system was a ‘laughing stock’ if it could be ignored.

She tweeted: ‘The ’22 rules were put in place to act as a barrier against the regicidal nature of Conservative MPs.

‘What is the point of the ’22 committee if the rules mean absolutely nothing? It’s a laughing stock and not fit for purpose if it makes it up as it goes along!’

Boris Johnson survived a summer confidence vote in his leadership. But it was the subsequent walk-out by ministers, started by health secretary Sajid Javid and, more punishingly, chancellor Rishi Sunak, that ended his time in No10.

More than 50 ministers quit over the space of several days, to bring his government to its knees. He also sacked Michael Gove as levelling-up secretary.

One junior minister, Michelle Donalan, was promoted to education secretary before resigning 36 hours later to join the rebellion over Partygate and general sleaze.

While he was able, just, to appoint replacements from his backbench supporters, his authority was shot to pieces and he quit a few days later.

Some junior ministers are now discussing a wave of co-ordinated resignations of the kind that eventually forced out Mr Johnson.

Ms Truss’s grip over her own ministers has been loose from the start. Former leadership rivals Suella Braverman and Penny Mordaunt came in to the Cabinet but showed little regard for collective responsibility – toeing a common line.

Ms Mordaunt has been mentioned as a potential replacement for the PM or chancellor on a ticket with Mr Sunak. 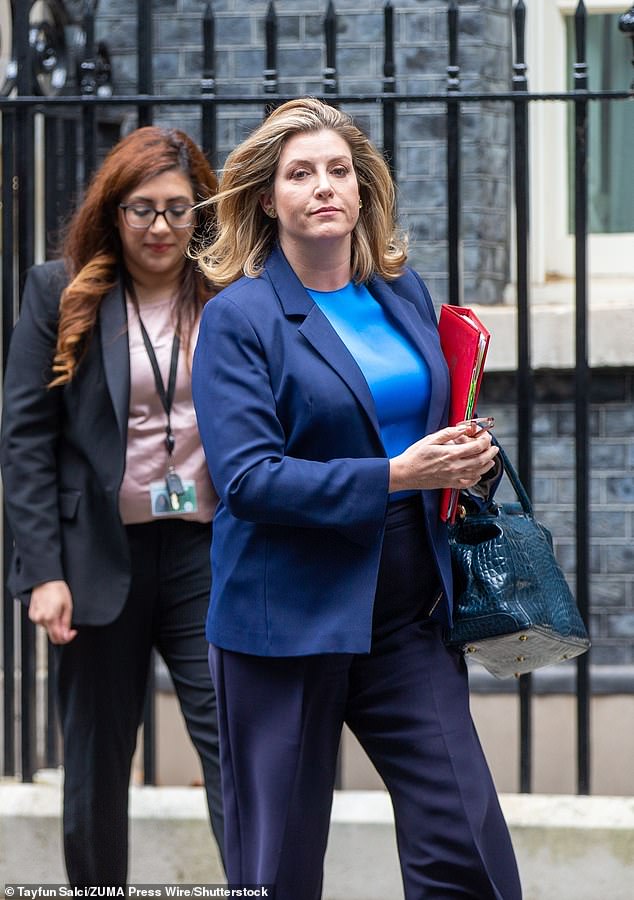 Ms Mordaunt has been mentioned as a potential replacement for the PM or chancellor on a ticket with Mr Sunak.

Last night she used an article in the Telegraph to call on her party colleagues to back the embattled Prime Minister – but in a way thsat critics suggested made her look good herself.

‘We must remember what we have achieved and how we did it. Above all, it was down to a commonsense approach,’ she wrote.

‘Pragmatism must always take precedence over policy. The Conservative Party understand this. If it has a fault, it’s that it’s impatient to get on with it.

‘There is a talented team of energetic and dedicated public servants at every level of government in this country. They are matched by leaders in just about every field of human endeavour. They know the problems we face are difficult and complex.

‘The national mission though is clear, as the Prime Minister said.

‘That is what we should all focus on now. It needs pragmatism and teamwork. It needs us to work with the Prime Minister and her new Chancellor. It needs all of us.’

‘Our country needs stability, not a soap opera,’ she wrote.

THE MEN IN GREY SUITS

Another choice the 1922 Committee have is to simply tell the PM that the game is up.

A formal rule change or a ministerial walkout would both be hugely embarrassing for Ms Truss  – even on top of recent events.

They would also be politically massively damaging for the Conservatives, with the PM seemingly having to be dragged kicking and screaming from office.

A slightly easier route would be for senior backbenchers including Sir Graham to meet privately with the PM, inform her that the game is up and rely on her honour to step down.

These ‘men in grey suits’ went to see Boris Johnson after his ministerial walkout to quietly – but very clearly – tell him he should resign for the good of the nation, the party and his own remaining dignity.

The grey suits from the 1922 Committee, led by Sir Graham, went to see the previous two PMs to tell them to go.

Known as the ‘shop steward’ of Tory MPs or the ‘mouthpiece’ of backbenchers, he has been in his role for more than a decade in two stints.

The Altrincham and Sale West MP, who was first elected to Parliament in 1997, had previously been a shadow minister but quit the role in 2007 due to Mr Cameron’s opposition to grammar schools.

He was a critic of Theresa May’s Brexit deal, although he eventually voted in favour of it at the third time of asking.

Sir Graham was also a frequent opponent of Covid lockdown restrictions imposed by Boris Johnson during the pandemic.

However, he did not oversee the election of Mr Johnson as Mrs May’s successor.

Sir Graham resigned as 1922 Committee chair in May 2019 in order to ‘consider’ making a leadership bid himself.

He never actually put himself forward as a leadership candidate and returned as 1922 Committee chair in September 2019.

Sir Graham was re-elected as chair in July last year after surviving a bid by allies of Mr Johnson to oust him from the powerful post.

His role in Mrs May’s eventual downfall as PM saw him revealed to have been the last person to meet with her before she spoke outside Number 10 to confirm her resignation in May 2019.

He was said to have gone into the meeting with an envelope of votes from the 1922 executive on whether to change the rules of the party to allow a second challenge to her leadership within 12 months.

This is very much the nuclear option for Tory MPs. Under Commons rules the Labour opposition can call a vote of no confidence in her premiership.

Under normal circumstances, with the Tories having a working majority of 75, they would be able to simply see it off, or even make it unlikely to be called for fear of failure.

But these are not normal circumstances. Less than 40 Tories have to rebel for the confidence motion to pass. This would compel the PM to resign.

But it is high risk. The new PM might feel compelled to call a general election – thought that is unlikely given the Tories’ current dire poll ratings.

But every Tory MP who votes against the PM – a publicly recorded vote – is marking their card with party members, the majority of whom voted for Liz Truss.

They run the risk of local constituency parties that are heavily pro-Truss deselecting them ahead of the next election.