Kitchen sink drama! Cocker Spaniel named Dory ransacks a family’s kitchen leaving them thinking they had been burgled when they returned home

A family thought they had been burgled when they returned home only to discover their small puppy was responsible for the scene of devastation.

One-year-old Cocker Spaniel, Dory, trashed the kitchen – pulling out the contents of all the cupboards and emptying the bin – while owner Dylan Raynor, his mother, Sharon and her partner, Nick, were out shopping.

The family returned to their home in Warrington after two hours and thought they had been burgled before noticing the nibble marks in everything and realising it was the dog. 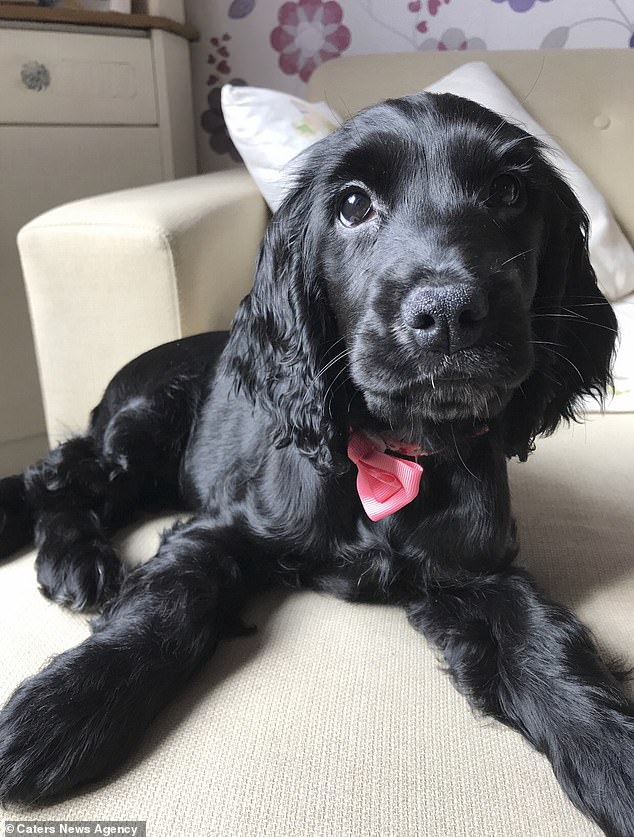 Ordinarily, Dory the one-year-old Cocker Spaniel, pictured, looks like the perfect pet sporting her fetching pink bow and staring into the middle distance with innocent-looking eyes 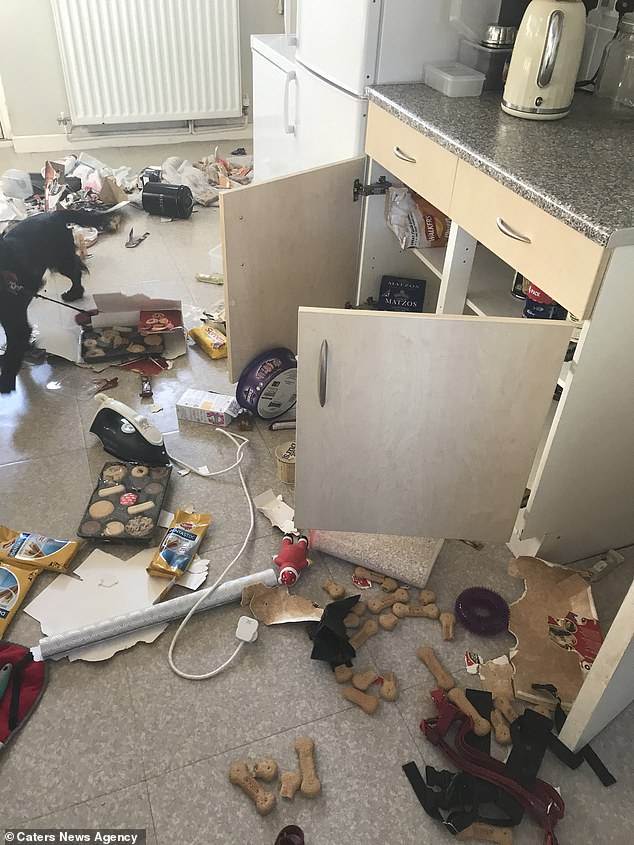 Yet, for Dylan Raynor, 21, Dory can no longer be treated like a docile dog because when she is left alone in the kitchen she is responsible for scenes of carnage such as this 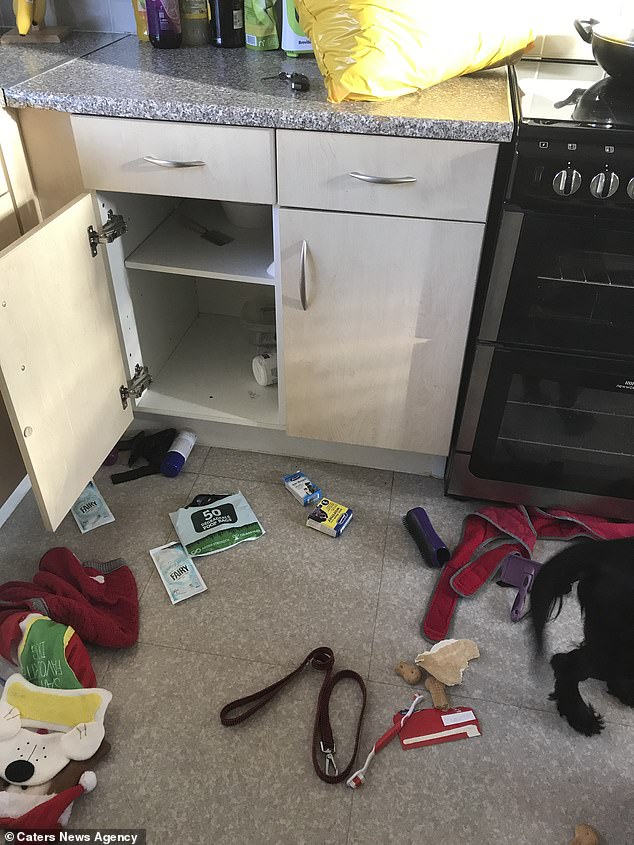 Such was the level of destruction rent by the puppy, the family assumed it was due to some miscreant felons who broke into their home in Warrington, Greater Manchester in order to steal their valuables

As well as casually tossing kitchen utensils aside, the dog tried to eat the family’s supply of icing sugar as well as several sheets of dried lasagne pasta.

The dog even managed to remove an iron from a cupboard during its two-hour rampage.

‘She attends doggy-day school and used to attend puppy training classes, however, all of these accolades do not reflect her mischievous behaviour. She’s like the Houdini of the doggy world.

‘We went shopping and we were out of the house for just shy of two hours. 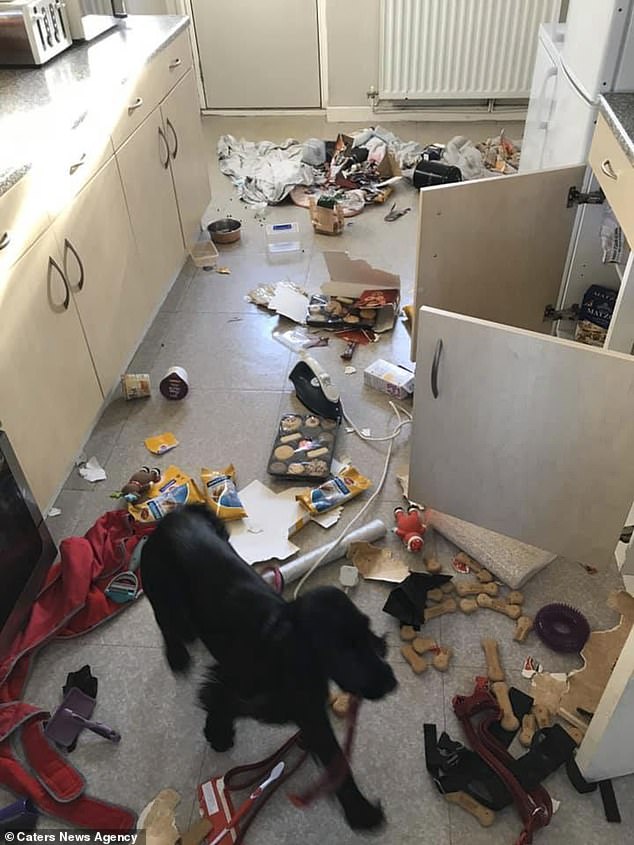 However, on closer inspection, the family discovered that apart from some missing icing sugar and several sheets of dried lasagna pasta, their most treasured possessions were still in place 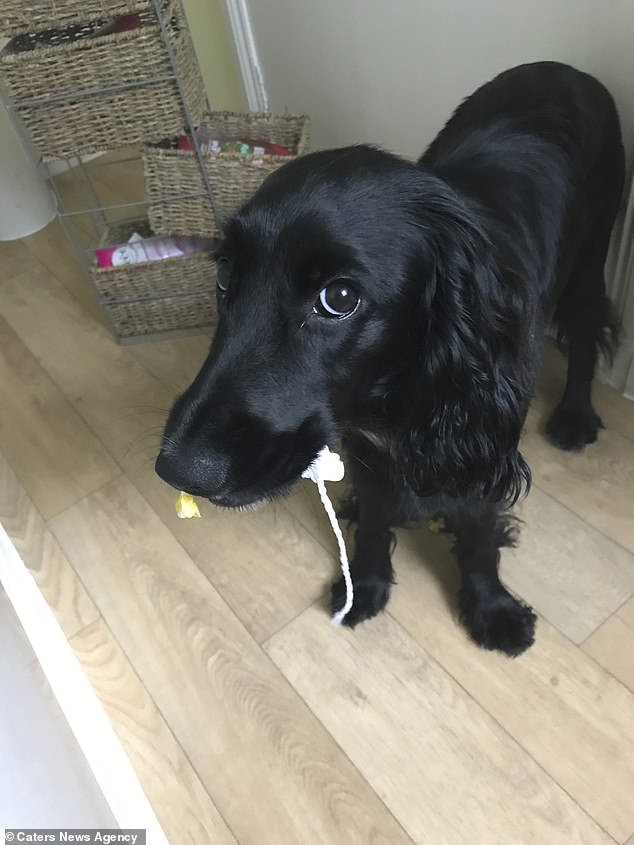 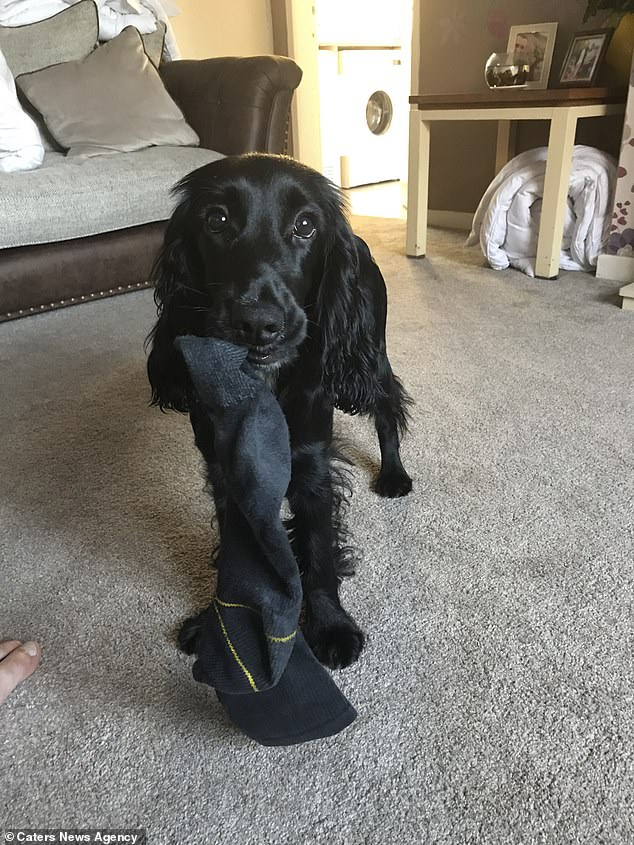 ‘As we arrived back my mother looked through the window and we honesty believed we had been burgled.

‘The cupboards were ransacked, food and items all over the floor.

‘It wasn’t until we noticed the nibble marks in the food and the inedible items, that we realised we had been ransacked by Dory.

‘She had emptied the contents of every cupboard and also the rubbish bin. After realising the destruction was caused by the dog and not a human it made me wonder what else she might be capable of. 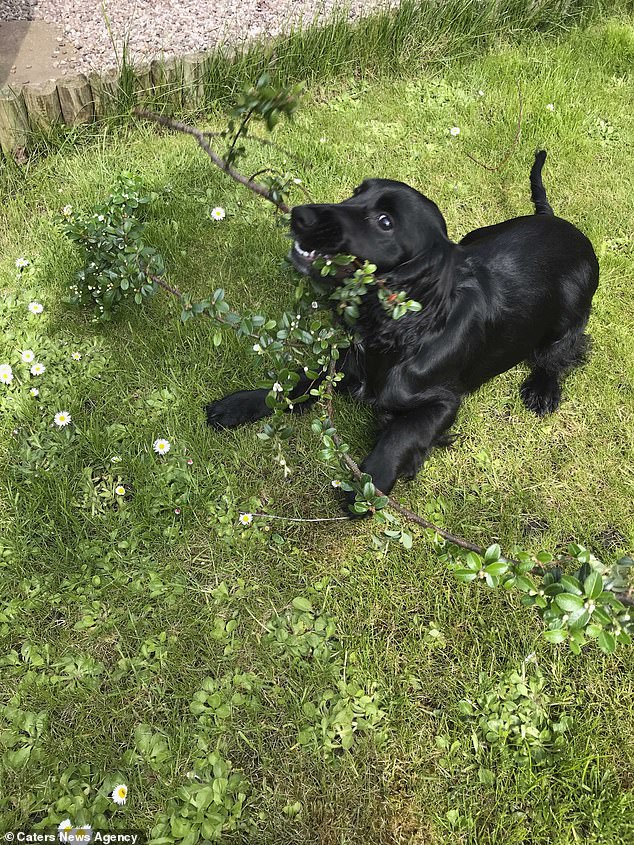 Even when in the garden, Dory the dog cannot prevent herself from behaving inappropriately

‘My mother was in disbelief as was her partner, and eventually we all laughed and realised if Dory had hands and fingers, we’d all be dead.

‘She has always taken socks out of a washing basket, or decided to take a risky drink out of the bath water showing no regards to the bubbles present. However, this has completely blown her previous mischievous behaviour out of the pond.

‘To top it off, Dory had taken a nibble out of literally everything on the floor, including the icing sugar, so everything had to be thrown in the bin.

‘She had nibbled her dog collar and consumed things which would make anyone sick in large amounts so we monitored her health but 24 hours after the incident she was perfectly fine, eating and sleeping as normal.

‘She will be one this month. I keep telling my family she will settle down soon but it appears to be something I’m saying all too often.’