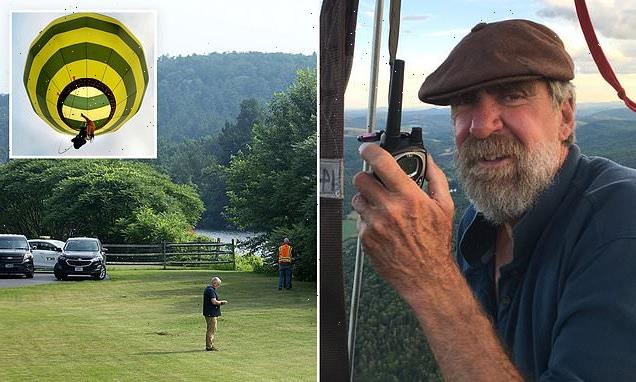 ‘World’s top hot-air balloon pilot’, 72, falls to his death after getting accidentally tangled in gear under the basket on Vermont flight

A hot air balloon pilot regarded by colleagues as the best in the world fell to his death after becoming entangled in homemade gear underneath the basket during a flight in New England.

Brian Boland died Thursday after taking off with his balloon, which was carrying four passengers, from his privately owned Post Mills Airport in the Vermont town of Thetford.

Some time later, the balloon touched down in a field and one passenger fell out, but was unhurt. At that point, Boland, 72, became entangled in harness gear he had created and affixed to the balloon as it re-ascended. Police said he eventually ‘fell to the ground from an (unknown) height’ into a Vermont field and was later pronounced dead.

Responding crews told NBC5 News that Boland’s balloon ran out of fuel mid-flight, causing the aircraft to plummet to the ground while those on board attempted to switch fuel tanks.

‘The guy was probably the top balloon pilot in the world,’ said Scott Wright, who knew Boland for over 30 years.

‘It must have been some freaky, flukey thing that happened.’

After the pilot’s death, three other passengers remained in the balloon as it continued to fly until it got caught in a grove of trees about 1.5 miles north in Piermont, New Hampshire, where they escaped without injury. 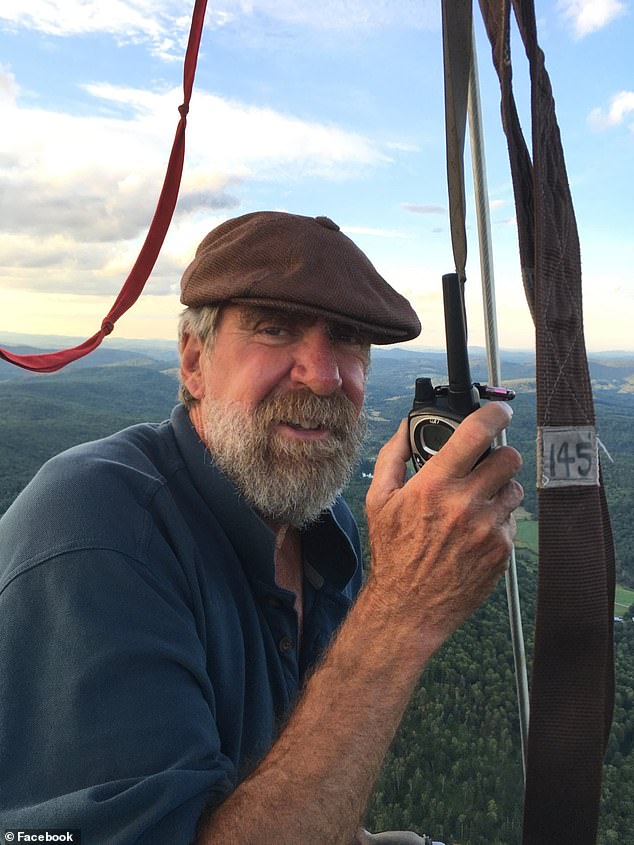 Brian Boland, 72, (pictured) died Thursday after falling out of his hot air balloon, which was carrying four passengers from the Post Mills Airport in Vermont 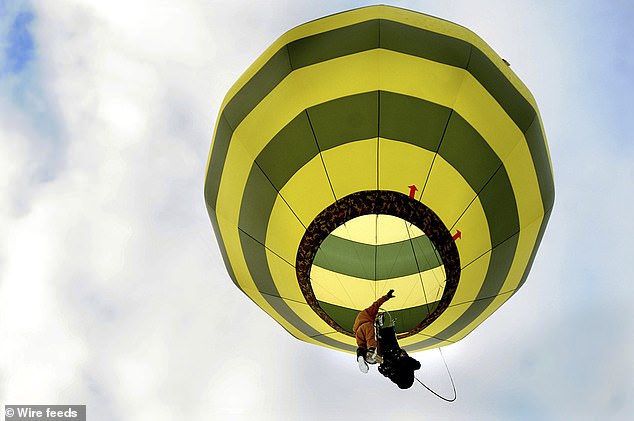 In a harness he created, Brian Boland takes off attached to a hot-air balloon with a passenger above Westshire Elementary School in West Fairlee, Vermont, on February 26, 2013 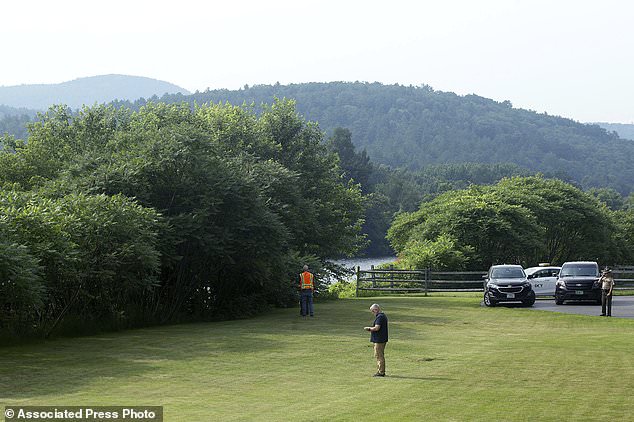 Investigators gather in Bradford, Vermont, on Friday following the death of a hot-air balloonist Brian Boland, 72, the pilot of the hot-air balloon that had been carrying a total of five people

Mick Murphy, a balloon pilot and past president of the Balloon Federation of America, from Bethlehem, Connecticut, said he’d known Boland since the mid-1980s. He described Boland as a talented artist who designed a balloon for his college that he flew over his school’s campus in 1971.

‘He was a very eccentric fellow,’ Murphy said.

‘No one danced in the same orbit as Brian. At 72 years young, and he was still looking 100 years down the road.’

Boland still owned that original balloon, the Phoenix, which he designed in 1971 and inflated every year on his birthday, said Murphy, who traveled to Vermont this past May for the 50th anniversary of that first flight.

Beyond the artistic, Boland – who had over 11,000 hours of experience piloting balloons – was a forerunner of experimental lighter-than-air balloon building. He pushed the major manufacturers on lightweight balloon designs that ‘we would not have today if it wasn’t for Brian, for his creativity, his passion,’ Murphy said.

Boland founded the Experimental Balloon and Airship Association, which was based at the small private Post Mills Airport, which he owned.

Post Mills is a hamlet in the town of Thetford not far from the Connecticut River border with New Hampshire, about 30 miles southeast of Montpelier.

The Federal Aviation Administration said a preliminary report on the crash said the aircraft was a Cameron 0-105 hot air balloon. Federal and state officials are continuing to investigate the circumstances of the crash. 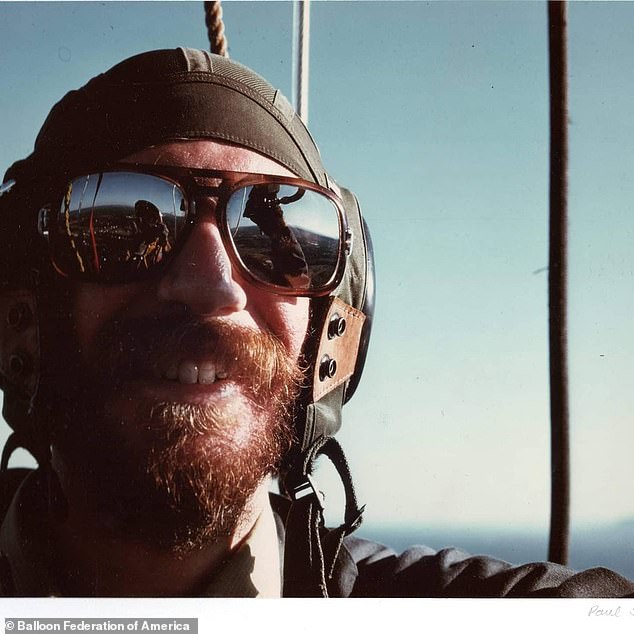 Boland, who had over 11,000 hours piloting balloons, was a forerunner of experimental lighter-than-air balloon building 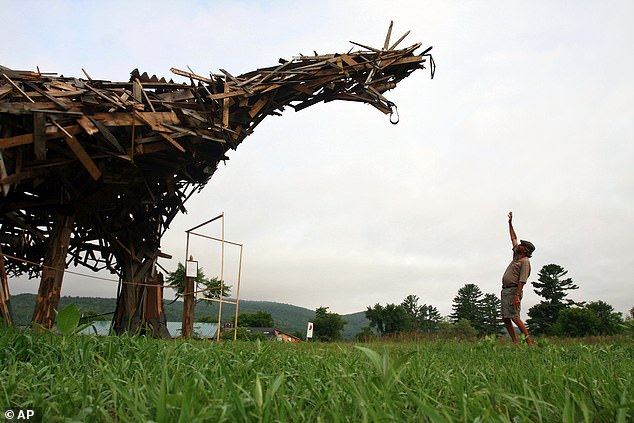 Boland also created sculptures made out of scrap wood, including the 122-foot-long dinosaur called the Vermontasaurus that sits alongside an airship museum at the Post Mills Airport

‘The guy was a legend in his own time,’ said Scott Wright, the owner of the Silver Maple Lodge in nearby Fairlee who worked with Boland offering packages of stays at his lodge and flights in Boland’s balloons.

Last week a couple stayed at his lodge who were taking a balloon ride for their 20th anniversary, Wright said.

Boland also made and sold balloons. Wright said people from Switzerland stayed at his lodge once because they were in town to buy a balloon from Boland.

Wright, who called Boland one of the top balloon pilots in the world, said Boland came to Vermont in the late 1980s so he could buy the Post Mills Airport.

There is also a balloon and airship museum at the grass airfield that has several large sculptures made out of scrap wood, including the 122-foot-long dinosaur called the Vermontasaurus that Boland made.

In a 2017 nomination for the United States Ballooning Hall of Fame, Murphy wrote that Boland’s museum includes antique chase vehicles, ballooning paraphernalia, and more than 200 balloons and airships.

Boland was not elected to the hall of fame in 2017, but Murphy said he would be considered again.

There was no answer Friday at the airport. 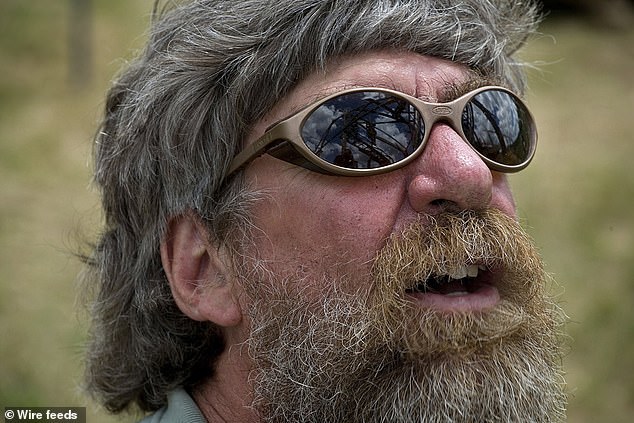 Boland founded the Experimental Balloon and Airship Association, which was based at the small private Post Mills Airport, which he owned