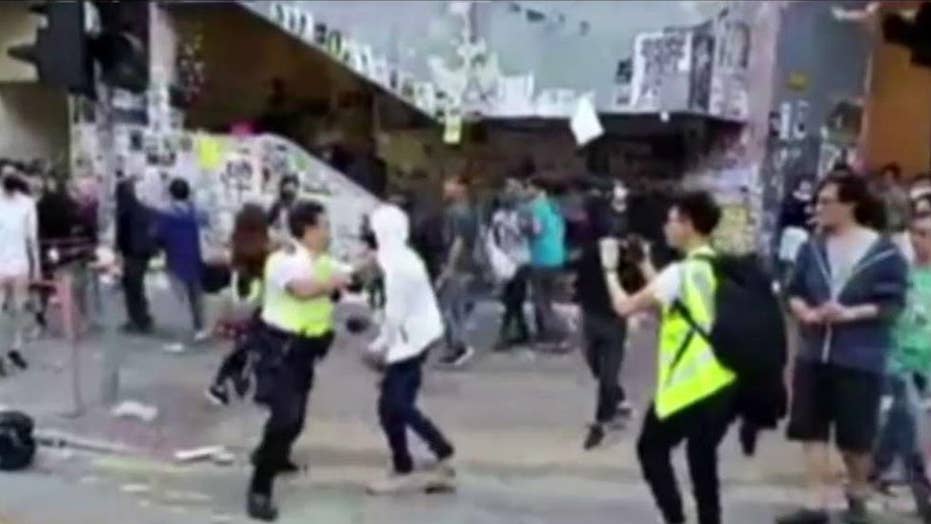 A flash mob of more than 1,000 protesters descended on central Hong Kong on Tuesday in a scene authorities said was bringing the Chinese-ruled city to the brink of "total collapse."

Clashes in the central business district and elsewhere in the former British colony came a day after a police officer drew his gun during a struggle with protesters, shooting one in the abdomen. In another neighborhood, a 57-year-old man was set on fire after an apparent argument.

“Our society has been pushed to the brink of a total breakdown,” police spokesman Kong Wing-cheung said at a media briefing in regards to the last two days of violence.

Kong said masked “rioters” had committed “insane” acts that have caused Hong Kong's rule of law to be "pushed to the brink of total collapse." Police said that violent protesters have thrown trash, bicycles and other debris onto metro tracks and overhead power lines, snarling the transit system. 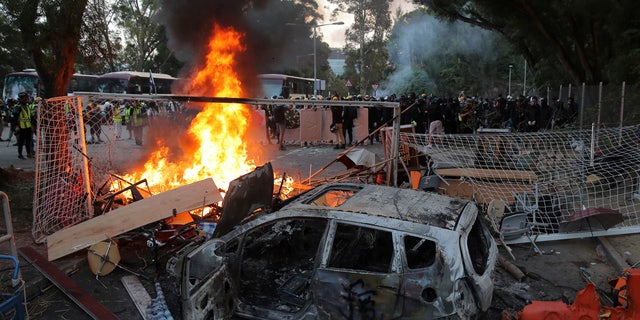 Students stand near a charred vehicle during a face-off with riot police at the Chinese University in Hong Kong, Tuesday, Nov. 12, 2019.
(AP Photo/Kin Cheung)

Commuter train passengers had to be escorted along the tracks, and subways were shut down because of disruptions. 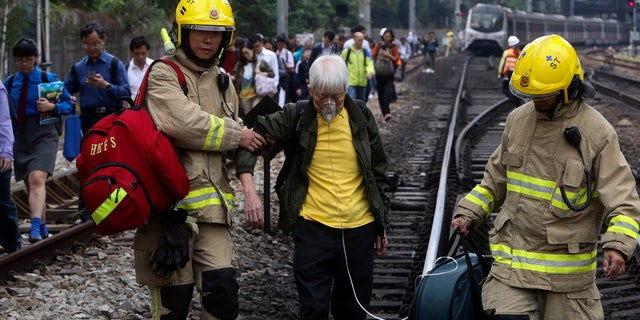 Firefighters help an elderly woman as commuters walk on the railway after their train service is disrupted by pro-democracy protesters in Hong Kong, Tuesday, Nov. 12, 2019.
(AP Photo)

A few thousand protesters took over several blocks of the central business district at lunchtime. The demonstrators chanted "Five demands, not one less" holding up one hand with five outstretched fingers. Their demands include democratic changes and investigation of police treatment of protesters.

A high school student surnamed Luk told the South China Morning Post she couldn't find a tram back to school due to the disruptions and decided to join in the citywide strike. Another 64-year-old woman surnamed Choy said she was afraid to go outside to get groceries in her wheelchair due to bricks strewn across the road. 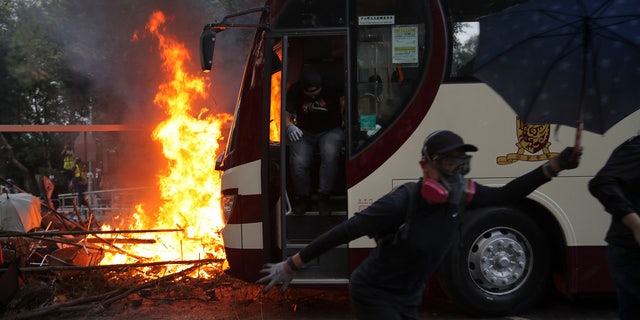 Students run past fire set near a bus during a face-off with riot police at the Chinese University in Hong Kong, Tuesday, Nov. 12, 2019.
(AP Photo/Kin Cheung)

“Why they did it, I don’t know. The government does not give in, the young people do not give in, it’s best they stop this,” she told the South China Morning Post.

Following a standoff outside Chinese University, scores of officers charged onto the campus after firing tear gas, arresting student protesters who tried to block their way with makeshift barricades, including a burning car.

Police fired tear gas as protesters threw petrol bombs and bricks at them, according to Reuters.

Recent weeks in Hong Kong have been marked by escalating vandalism against shops linked to mainland China and train stations, and assaults by both protesters and pro-Beijing supporters. 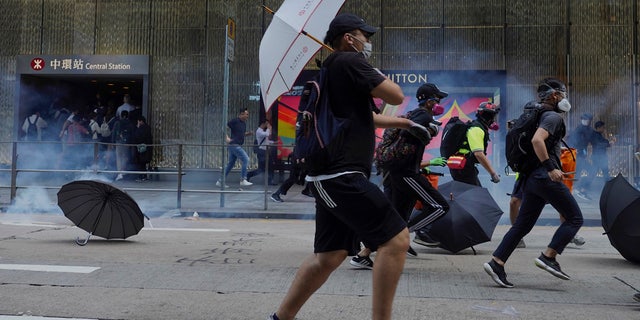 Pro-democracy protesters and people run away from tear gas fired by riot police during a rally in Central in Hong Kong, Tuesday, Nov. 12, 2019.
(AP Photo/Vincent Yu)

Hong Kong leader Carrie Lam, speaking to news media after a weekly meeting with advisers, called the blocking of the morning commute "a very selfish act."

"People from different sectors in society are holding fast to their positions and refusing to concede to violence or other radical actions," she said. "I hereby express my gratitude to those who are still going to work and school today."

Police said Tuesday the protester who was shot remains hospitalized in serious condition, while the man who was burned was in critical condition, according to the Hospital Authority.

Video of another incident showed a policeman on a motorcycle riding through a group of protesters in an apparent attempt to disperse them. Police said those events are being investigated but defend the officers' actions as necessary for their own safety.

After violent protests on the streets of Hong Kong seemed to die down in recent weeks, new instances have erupted between pro-democracy protesters and Hong Kong police, including one protester being shot at close range. Author and Asia analyst Gordon Chang believes that without help from the international community, China will resort to the worst tactics when dealing with protesters.

Lam, who has refused to accept the protesters' demands, pledged Monday to stop the violent protests in comments suggesting harsher legal and police measures could be on the horizon.

"I do not want to go into details, but I just want to make it very clear that we will spare no effort in finding ways and means that could end the violence in Hong Kong as soon as possible," she said.

In Beijing, foreign ministry spokesman Geng Shuang lambasted the U.S. and Britain over statements of concern over the spike in violence. China accuses the U.S. and other foreign powers of fomenting and encouraging the protests.

"The United States and Britain pretend to be fair on this incident, but it only reveals how they confuse right and wrong and how hypocritical they are. And their verbal justice once again exposes their double standards and ulterior motives," Geng said at a daily briefing. 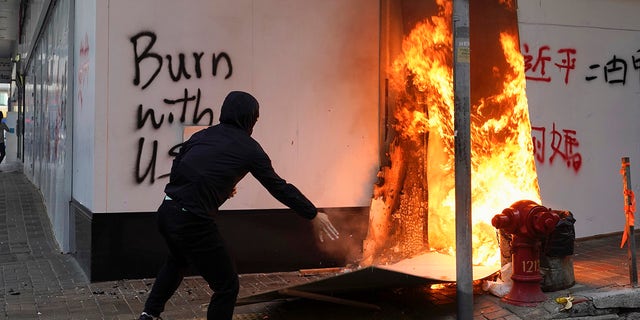 A protester sets fire to the cardboards outside the Bank of China branch during a protests in the Central district of Hong Kong, Monday, Nov. 11, 2019.
(AP Photo/Vincent Yu)

In Washington, the U.S. government said it is watching the situation with "grave concern."

"We condemn violence on all sides, extend our sympathies to victims of violence regardless of their political inclinations, and call for all parties — police and protesters — to exercise restraint," State Department spokeswoman Morgan Ortagus said in a statement.