Hong Kong pro-democracy activists jailed for contempt of court for their role in the country’s 2014 ‘Umbrella’ protests. 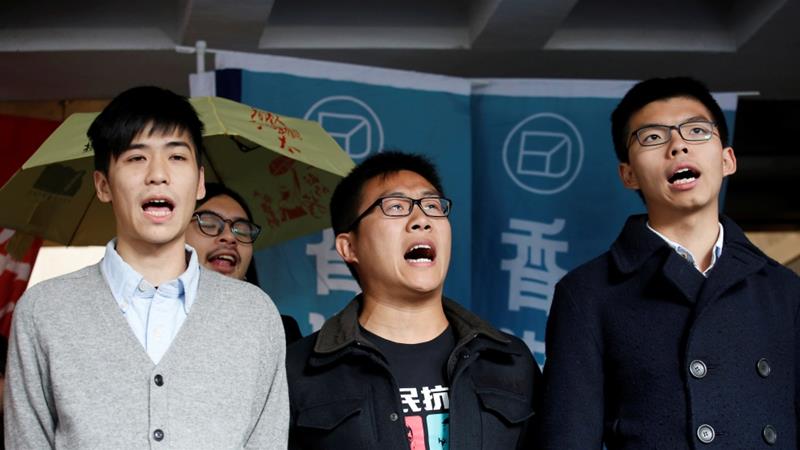 A Hong Kong court has jailed activist Joshua Wong for the second time over his role in the country’s pro-democracy “Umbrella Movement” protests.

The country’s High Court found Wong guilty of contempt of court for failing to comply with an order to leave the 2014 protest, and sentenced him to three months in prison on Wednesday, the Hong Kong Free Press website reported.

Wong, 21, had pleaded guilty to the charges.

The “Umbrella Movement”, which drew hundreds of thousands of protesters at its peak, was formed after Wong and other demonstrators stormed into a courtyard fronting the city’s government headquarters in September 2014, demanding an end to China’s prescreening of candidates for election of the region’s leader.

The name of the movement arose from the use of umbrellas as a tool for peaceful resistance to the Hong Kong police during the protests.

The demonstrations, which continued for almost three months, brought parts of Hong Kong to a standstill.

Andrew Chan Hing-wai, the High Court judge presiding over the case, told the court Wong had played a “leading role” in the demonstrations and added “the only appropriate punishment … is immediate imprisonment”, the report said.

Wong had previously been jailed for six months under the charge of unlawful assembly, in August 2017, for taking part in the ‘Umbrella Movement’.

Fellow activist Raphael Wong, 29, also received a jail sentence – totalling four and a half months – on Wednesday for contempt of court, according to the Hong Kong Free Press. He had pleaded not guilty to the charge.

Neither men were granted bail during Wednesday’s sentencing, but a second hearing is scheduled for later on Wednesday to discuss the possibility of their release. Both are already on bail related to separate cases.

Several others involved in the 2014 demonstrations received suspended sentences, according to the South China Morning Post, with the sentences ranging in length from one to two months.

Following his court appearance, Joshua Wong said on Twitter that he will vote in upcoming by-elections for Hong Kong’s Legislative Council, due to be held on March 11.

We will vote in prison in the March by-election. We will accept it with calmness. We hope the pro-democracy camp will unite.

Hong Kong, a former British colony, returned to China in 1997 under a “one country, two systems” agreement that ensured its freedoms, including a separate legal system.

But Beijing has ultimate control, and pro-democracy protesters in Hong Kong contest it is increasingly clamping down on the city’s constitutionally enshrined freedoms.