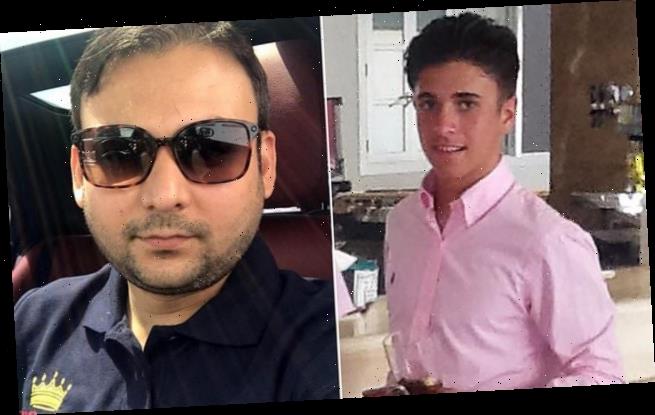 Newlywed hit-and-run driver, 21, who ‘inhaled laughing gas’ at wheel before killing father-of-two while he was on bail for another crash is jailed for three years 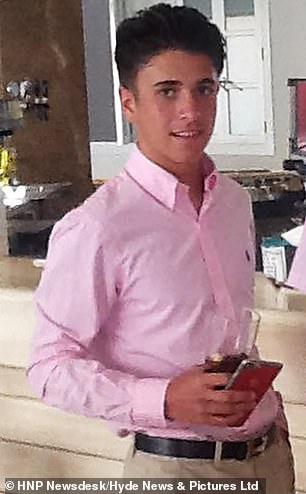 A hit-and-run driver has been jailed for three years for killing a restaurateur in front of his wife and children after sucking on a balloon at the wheel.

The 21-year-old yard worker fled the scene and later handed himself into Staines police station, claiming a pedestrian ‘stumbled out’ in front of his car.

Reading Crown Court today heard he had been driving at 67mph in a 40mph zone and was on the way to pick up two girls when he hit the father of two.

They were shown CCTV footage from minutes earlier of him sucking on a balloon thought to be filled with nitrous oxide or ‘laughing gas.’

The fatal smash came after Haffenden was involved in another crash on August 16, 2018.

He had fallen asleep behind the wheel of his Toyota Hilux on his way back from Christian camp when he hit Graham Nichols.

Mr Nichols was left with life-changing injuries after the Isle of Sheppey crash and Haffenden had again fled the scene. 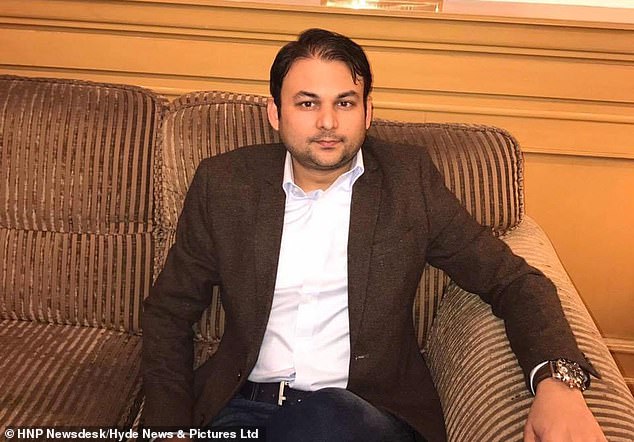 Prosecuting counsel Mr Blake said: ‘Syed Zaidi worked as a restaurant owner. He had received a call to say that a delivery driver was having problems with their car.

‘He decided to do the delivery himself before going home. He was delivering the last lot of food to a home in Wraysbury Road, Virginia Water.

‘His wife saw him look right on the road before she saw a flash and her husband disappeared from her view. She realised he had been propelled some distance.’ 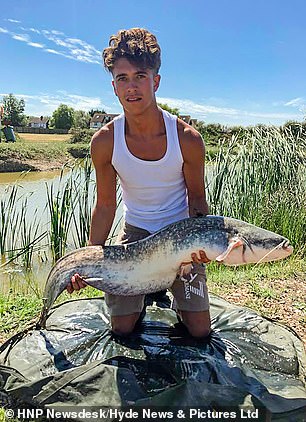 The 21-year-old yard worker (pictured) fled the scene and later handed himself into Staines police station, claiming a pedestrian ‘stumbled out’ in front of his car

Haffenden, then 19, from East Malling, Kent, did not stop to help Mr Zaidi and instead fled before abandoning the car 10 minutes later in Egham, Surrey.

Hours later the teenager handed himself into Staines police station, claiming a pedestrian had ‘stumbled out’ in front of his car and he braked too late.

Widow Afsheen Shiraz said from the witness box today: ‘After this incident I have lost myself, I have to take care of my children alone, I am totally incomplete without him. My heart weeps every night.

‘When my children ask when their papa is coming back I am left speechless. My daughter said she wanted to become a doctor so she can heal her father from the accident.

‘We were all sitting in the car, it was a family day out at Virginia Water, everything happened in front of us.

‘We were looking to our husband delivering food, after that he was coming back – my children saw it all. We will never forget that moment.

‘I saw my husband upside down, blood was coming out of his mouth, I cannot explain – it was horrible, the worst day of my life. It all happened in the blink of an eye.

‘Without my loving, caring husband, my children do not have their father to protect them.

‘When I see a couple smiling I look to the sky and ask God to support them because I know the pain I am suffering. My life is completely meaningless.’

Judge Paul Dugdale heard Haffenden was driving at 67mph on a 40mph road just 100m before he collided with the father-of-two.

A post-mortem confirmed the victim died from chest and abdominal injuries, as well as traumatic injuries of the aorta.

Defence counsel Jonas Milner said the defendant’s ‘close knit family’ had never been in trouble with the law and were devastated.

Haffenden cried in the dock as he heard how Mr Zaidi had been out with his one-year-old son, his three-year-old daughter and his wife.

His father sat in the public gallery while his mother sat outside, unable to listen to the evidence. 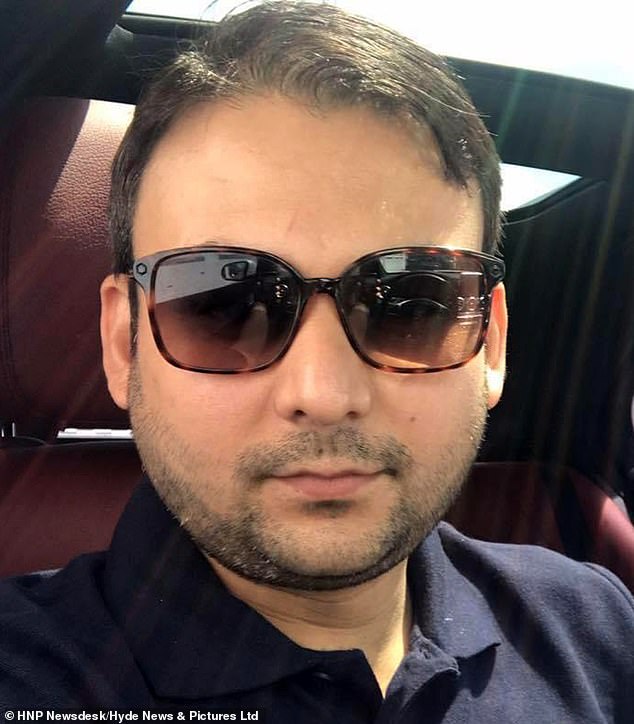 Widow Afsheen Shiraz (pictured, her late husband) said from the witness box today: ‘After this incident I have lost myself, I have to take care of my children alone, I am totally incomplete without him. My heart weeps every night’

Mr Milner added: ‘There is not a day that goes by when Gary Haffenden doesn’t feel remorseful for what he has done.

‘He will remain remorseful for the rest of his life. At the time of the accident he accepts he was driving too fast.

‘He recently married his long term girlfriend. He accepts that his life will be on pause as he serves his punishment but there is hope for him in the future.’

Haffenden was on police bail when he killed Mr Zaidi – for the crash that injured Mr Nichols nine months earlier.

In the earlier crash he jumped out of his mangled Toyota at 3.30am and asked Mr Nichols if he was okay before fleeing.

Mr Nichols could see bone protruding from his left hand and had to be cut out of his Skoda Fabia before paramedics rushed him to Kings College Hospital in London.

Haffenden handed himself in to police the next morning and they found canisters of nitrous oxide scattered on the floor of his truck and a packet of yellow latex balloons.

Judge Dugdale heard the victim was kept at the hospital for five weeks – having broken both legs and knees – and underwent multiple surgeries.

Mr Nichols – who was only three years away from retirement – was forced to take early leave and he can now only walk ‘up to half a mile’ with a crutch as an aid.

Judge Dugdale said: ‘The first collision in the Isle of Sheppey caused life-changing injuries to Graham Nichols, who has to get through the rest of his life needing a crutch to walk.

‘The second collision killed Syed Zaidi. Nothing I can do will help his wife, his father in Pakistan and, worst of all, his children who will grow up without knowing their father at all. There are no winners in this.

‘You were on bail for having crashed a pick-up truck into a man who spent five weeks in hospital.

‘One would have thought you were doing your best to keep out of the driver’s seat, let alone a pick-up truck when you are out in a jolly with your mates, taking gas from balloons which you did that day.

‘We have seen pictures of you with a balloon in your mouth, you have told us that balloon was full of air.

‘I sentence you on the basis that you were not under the influence when this accident took place.’

Haffenden admitted causing death by careless driving, causing death while uninsured and failing to stop, as well as admitting to the previous offence of causing serious injury by dangerous driving.

He was jailed for three years and was disqualified from driving for four-and-a-half years.