She told the BBC she is ‘dumbfounded’ by the decision and believes ‘every person who votes’ in the UK should see it before Britain goes to the polls on December 12.

The former presidential candidate spoke out while touring British radio studios with her daughter Chelsea promoting their new book ‘Gutsy Women’ – but some have questioned the timing of her own intervention ahead of a UK general election.

The report by the Intelligence and Security Committee (ISC) was sent to the Prime Minister for approval on October 17 – but it has been held up.

Speaking to Radio 4’s Today programme, Mrs Clinton said the delay was disgraceful given the upcoming election, referencing the proven Russian interference in the 2016 US election.

The former secretary of state said: ‘I’m dumbfounded that this Government won’t release the report about Russian influence. Because every person who votes in this country deserves to see that report before your election happens. 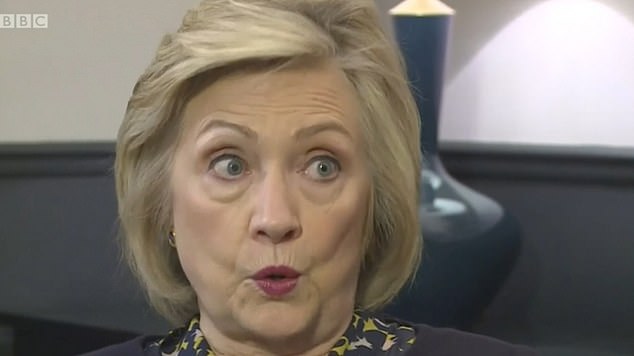 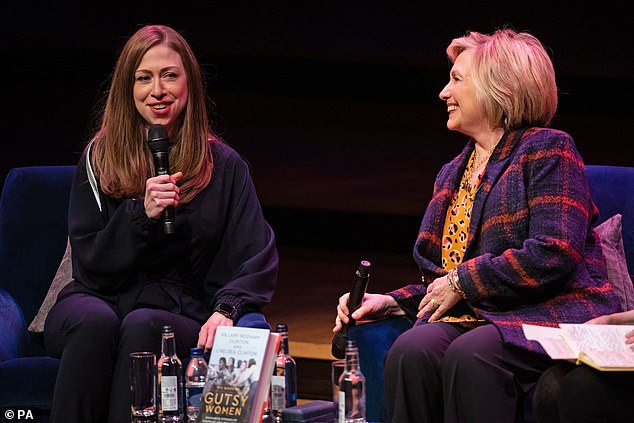 Chelsea Clinton (left) and Hillary Clinton are in London promoting their book ‘Gutsy Women’, which they co-wrote

‘That should be an absolute condition. There is no doubt – we know it in our country, we have seen it in Europe, we have seen it here [Britain], that Russia in particular is determined to try to shape the politics of Western democracies, not to our benefit, but to theirs.

‘People deserve to know what is in that report. We had a somewhat similar problem in 2016.’

Although there has been no indication of the precise contents of the report, it will assess the threat posed by Moscow to Britain’s democratic processes following an 18-month inquiry into illicit Russian activities in Britain.

The Sunday Times previously claimed nine Russian business people who have donated money to the Conservative Party were named in the dossier.

Former attorney general Dominic Grieve, who has seen the report, has stressed its publication is essential ahead of the General Election, as it contains information ‘germane’ to voters.

Hillary Clinton ‘wants to hug’ the Duchess of Sussex after she was targeted by trolls on social media.

The former US presidential candidate said Meghan’s treatment over the past three years had been ‘heart-breaking and wrong’.

She was joined by her daughter Chelsea, who said that the duchess ‘absolutely’ faced a racially charged backlash after her relationship with Harry began in 2016.

Mrs Clinton said: ‘I think even if you go back and look at social media from the time the engagement was announced, race was clearly an element in it.’

She told BBC Radio 5 Live: ‘She has made her own way in the world. Then she falls in love, and he falls in love with her, and everybody should be celebrating that because it is a true love story. You can just look at them and see that.’

A report into Russian interference in the US presidential election in 2016 found illegal interference from Moscow occurred in a ‘sweeping and systemic fashion’, according to special counsel Robert Mueller.

Mrs Clinton stressed the importance of the UK security report being made public before the General Election to allow voters to make informed decisions.

She continued: ‘(Donald) Trump and his campaign were under investigation for their connections with Russia, and Russians, and Russian cutouts and Russian agents, and others promoting Russian interests.

‘And the public didn’t know before the election. And I would hate to see that happen here. Whatever the outcome.

‘ don’t know what’s in it, any more than anybody else does. But certainly, people who are about to vote in a month or so deserve to know what is in a report that one has to speculate must have something of concern, otherwise why wouldn’t it be publicly disclosed?’

Mr Grieve, chairman of the ISC, has accused the PM of sitting on the report ahead of the December 12 vote.

Transport Secretary Grant Shapps and a Downing Street spokesman have said the machinery of government is the reason for the delay in publication.

Mr Shapps said that while he was not close to the report, the delay is ‘just the usual way that purdah works’ and incumbent governments are not allowed to publish anything controversial in the run-up to an election.