Special counsel Robert Swan Mueller III is the second-most famous man in Washington. Time magazine just ranked him No. 3 on their Person of the Year list – after crusading journalists and US President Donald Trump. 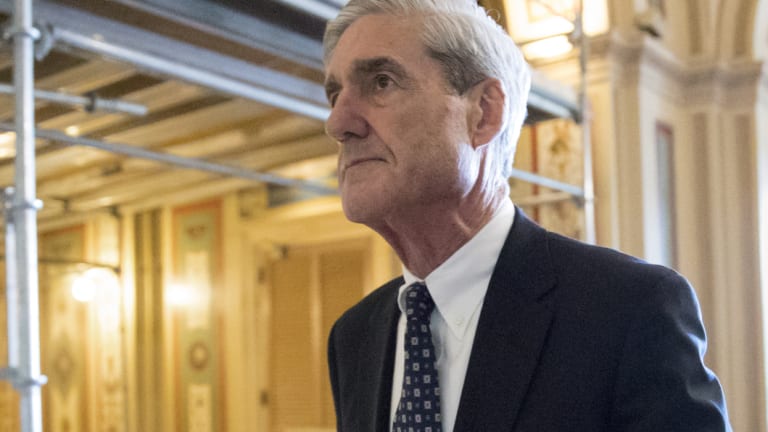 A rare photo of Special counsel Robert Mueller as he departs Capitol Hill in Washington on June 21, 2017.Credit:AP

It is impossible to spend a day in Washington without hearing or reading Mueller's name. He will go down in history, for better or worse, as one of the pivotal figures of the Trump era.

All this for a man who seldom speaks and is rarely seen. He is omnipresent and absent, inescapable but elusive, the invisible yang to Trump's gold-plated yin.

"Mueller's silence has invited noisy speculation from partisans," writes Time. "To critics on the right, he is an overzealous prosecutor drunk on power and roaming beyond his mandate in a bid to drum Trump out of office. To liberals, he is a crusading hero who won't quit until he brings the President to justice. The public narrative of Mueller's investigation this year has often described its central character more as myth than man."

Such is the peculiar nature of Washington that a powerful man who shuns the spotlight should become an object of fascination, and the specific character of Mueller – an old-school WASP indifferent to entreaties for speeches, interviews and photo-ops. More people have seen Robert De Niro playing Mueller on Saturday Night Live than have seen the special counsel himself.

"I always joke that Bob Mueller has turned down more interview requests in his career than most people in Washington ever get in the first place," says Garrett Graff, author of The Threat Matrix: Inside Robert Mueller's FBI and the War on Global Terror and Mueller's de facto biographer.

"Contrary to every single thing that the President tweets today, Mueller is and always has been probably the most apolitical nonpartisan person in the city. He does everything that he can to avoid the public spotlight and anything even slightly resembling politicking."

Mueller is content to be known and respected within a very small circle of close friends and colleagues. That's rare in a town filled with former high school class presidents with enough egos to "float battleships," as the former senator Alan Simpson put it.

Mueller's one and only public statement

Politicians love cameras – and Twitter feeds, Instagram and more – but Mueller's only public statement as special counsel came on May 17, 2017, the day he was appointed: "I accept this responsibility and will discharge it to the best of my ability." 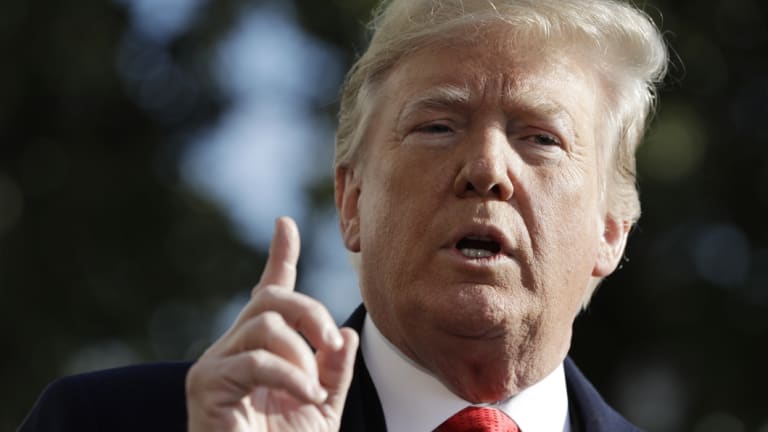 US President Donald Trump has criticised the Mueller probe as a “witch hunt”. Those who known Mueller say he is nonpartisan. Credit:AP

More than anything, silence has come to define Mueller. He's become a meme, a cartoon superhero or supervillain, more powerful with every word he does not say.

"Like all the FBI directors I have known, including myself, Bob is not about to try his case or run his evidence by the court of public opinion," says William Webster, the only man to head both the FBI and the CIA.

"That's not how our FBI works. It's not how Bob Mueller works. It might make for good TV ratings, but it leaves too much open for misunderstanding and, in my opinion, creates a circus atmosphere around critically important cases." 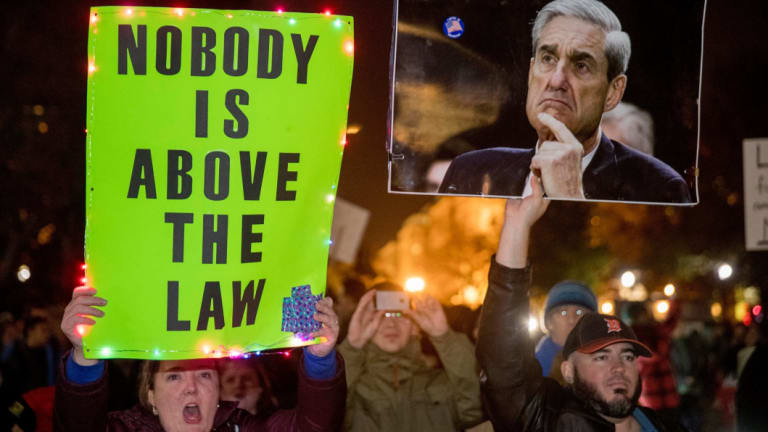 Protesters in front of the White House in Washington on November 8 as part of a nationwide ‘Protect Mueller’ campaign demanding that Acting US Attorney General Matthew Whitaker recuse himself from overseeing the Russia.Credit:AP

In fact, Mueller – by temperament and professional experience – has always preferred to be judged by his deeds, not his words.

He grew up in Princeton, a childhood of privilege and private boarding schools, where self-aggrandisement and promotion were considered poor form. His stints as a Marine platoon leader during the Vietnam War and as a federal prosecutor emphasised teamwork rather than any individual effort.

During his 12-year tenure as head of the FBI, he rarely appeared at public events and turned down virtually all the A-list invitations that came with that title.

During his trip to the Capitol to brief Congress in June 2017 – one month after becoming special counsel – Mueller and his team navigated back hallways and stairwells to avoid the media. There have been only three widely circulated sightings in the wild since then: One photo of Mueller standing on a street corner in March, one in July with Mueller and Donald Trump jnr both waiting to catch a flight at Gate 35X at Reagan National Airport, and one of Mueller and his wife in September at the Genius Bar in Georgetown's Apple store, where they were getting help with a laptop.

Mueller and his prosecutors run the tightest ship in Washington. No interviews, no leaks, no whispers, no jokes. In August, members of his team were spotted by the press waiting for a Shake Shack delivery at an Alexandria hotel during Paul Manafort's trial. Peter Carr, Mueller's spokesman, would not even confirm the order.

Mueller rarely ventures outside his temporary office in a nondescript federal building. Even in his most public role before this, as head of the FBI, Mueller only appeared in public when it was important to the bureau. Most of photos of him are from testimony to the Senate several years ago.

"One of the things that I think is important in understanding him is understanding the perspective that he brings to this job," says Graff. "If you got him in a moment of candor, he would say that this is no more than the third-hardest job that he has ever had after the Marines in Vietnam and after being FBI director in the wake of 9/11. In that sense, the photo of him at the Apple Store is indicative of a lot: He's just continuing to lead his life. His life has always been under the radar and non-showy, and that's exactly how he has comported himself as special counsel."

Mueller's private life is even more circumspect. It is possible, after following the bread crumbs of his biography, to determine his comings and goings. He lives in a gated community in Georgetown with his wife of 52 years, Ann. They have two daughters, Melissa and Cynthia, seen only when they attended his 2001 confirmation hearing as head of the FBI. The couple regularly attends services at an Episcopal church in downtown Washington. They both play golf, although Ann's the better golfer of the two.

And they have a weekly dinner date, usually at their favourite Italian restaurant near their home. The Muellers have been regulars for years, typically sitting unnoticed behind the bar in the back of the room. How, in this age of smartphones and cameras, does Mueller pull that off? The owner, as did everyone contacted for this article, declined to comment.

In fact, virtually everyone within Mueller's orbit refuses to talk about him.

"The people that he has surrounded himself with throughout his career are temperamentally very like him," explains Graff.

"And he has a good set of longtime friends in DC that he primarily socialises with. He's someone who draws a pretty firm line between work and home in terms of socialising. Part of the answer is just that the people around him don't share the things that they do with him. And he has developed a series of places that he likes to go where I think that privacy is respected – and they're also not the trendiest restaurants on 14th Street where he would be recognised."

Even the press has been unwilling to cross Mueller's invisible line. Salt Lake Tribune reporter Thomas Burr tweeted that he saw Mueller in June: "Gotta love DC. Walk into restaurant, run into the special counsel." But Burr declined to say which restaurant.

Some of this is respect for Mueller. Some of this is the fear of unintentionally providing a piece of information that could compromise the Russia investigation. And some of this is just fear for Mueller himself. Given the heated rhetoric surrounding Trump, friends and colleagues are reluctant to say anything that could lead to Meuller being physically harmed in any way.

"Bob Mueller is doing exactly the right thing by simply focusing on this investigation and trying to determine the truth," says Panetta. "I don't know what the final result is going to be, but I have a sense that whatever that final report shows that people are going to thank Bob Mueller for the way he handled this."

We asked Mueller's spokesman if he had a response to … well, anything.

"We appreciate your reaching out, but we'll decline comment at this time," came the response.