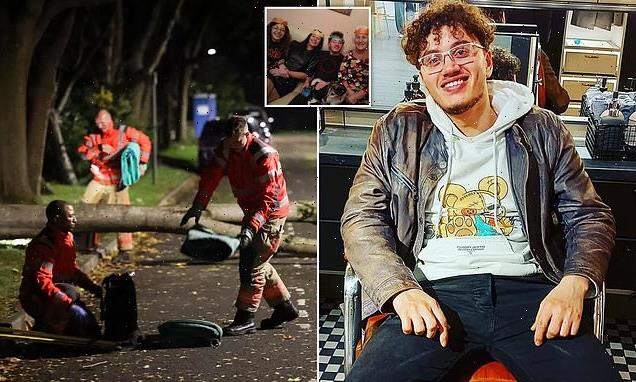 Family of film student, 26, who died after being hit by a falling tree in tragic accident pay tribute to ‘lovely gentle soul’ whose passing has left them ‘absolutely devastated’

The family of a young man who died after being hit by a falling tree have paid tribute to their ‘world and strength’.

Darnell Cordingley was killed in the freak incident in Sale, Greater Manchester, on Thursday afternoon, when a falling tree was blown over in strong wind, hitting the beloved 26-year-old.

One of his long-term friends, Sam Smart, was also injured in the tragedy and remains in hospital.

The avid gamer and filmmaker, who had his own YouTube channel, was tragically pronounced dead at the scene, leaving his family and friends devastated.

Tributes poured in for the ‘best big brother anyone could have hoped for’, with close friends, loved ones, and people who knew Darnell from his online hobbies coming together to remember him.

Now, his devastated family have paid the own heartbreaking tributes to their son and brother. 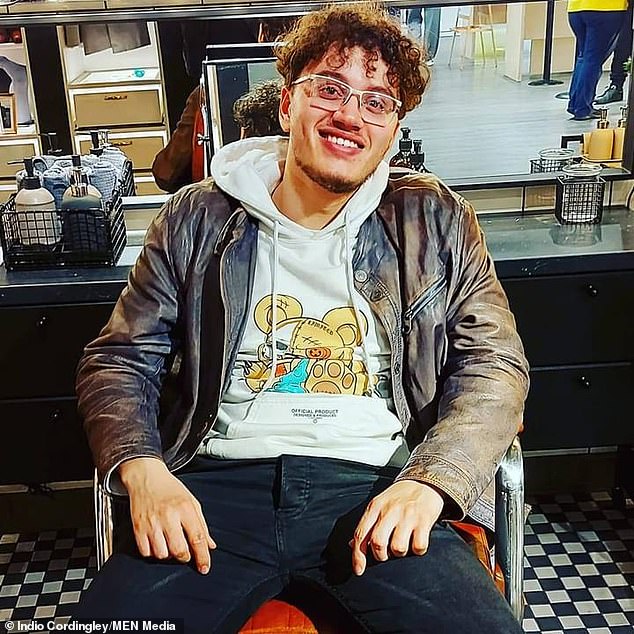 Darnell Cordingley, 26, was killed in the freak incident in Sale, Greater Manchester, on Thursday afternoon. Tributes have since poured in from heartbroken friends and family 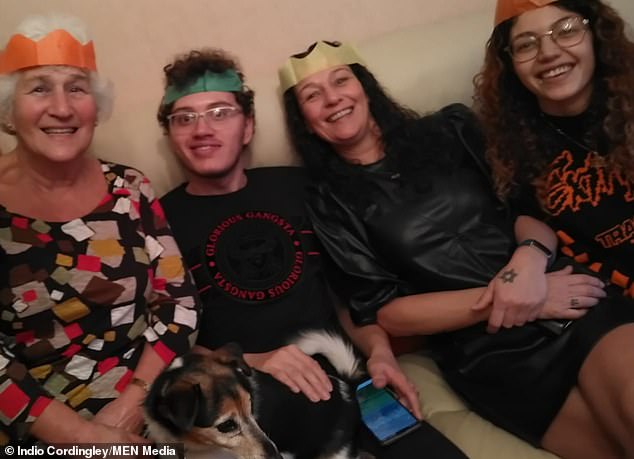 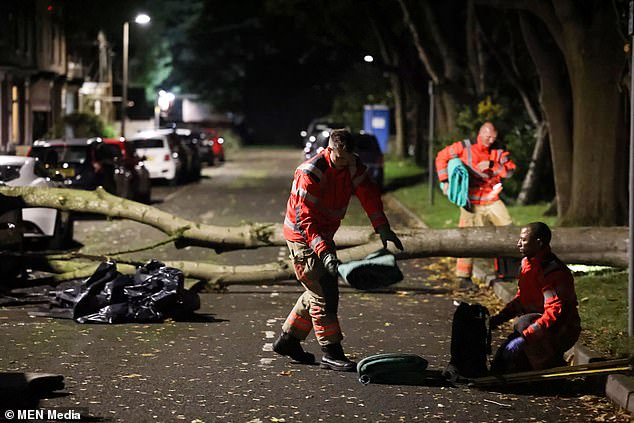 The 26-year-old was described as an avid gamer who had a ‘caring soul’. Pictured are emergency crews at the scene Thursday’s tragedy in Sale, Greater Manchester

‘He was the apple of my eye, my world, and my strength. He was a really good son, loving, loyal, always there for us both and always took care of his sister, we’re going to miss him very much.

‘Myself and my daughter are absolutely devastated, it’s always been us three against the world and nothing can fill the void that’s been left in our lives.

‘There’s nothing that can fill this emptiness. It’s just tragic, it shouldn’t have happened to him. He had a happy and caring soul and always wanted the best for everyone. He could brighten up any room.’

Mr Cordingley, who spent most of his spare time gaming, loved walking, animals, and playing airsoft – a popular military-style game where participants shoot one another with BB guns.

The straight-A student, from Altrincham, was studying directing and film at the University of Central Lancashire in Preston.

He lived at home with his mother and sister and was saving to get onto the property ladder and buy his own home.

His sister, Indio Cordingley, 23, said: ‘Darnell was the best big brother anyone could have hoped for. He was always by my side when times got hard and I’m going to miss his comforting presence.

‘He genuinely cared about everything and everyone, and he never had an enemy, everyone that met him loved him. Everyone he ever met was friends with him, he never had anything bad to say about anyone, he was just happy to be a part of people’s lives.

‘He was down to earth, kind, and had a really calming and comforting presence. Even if you were the most stressed you’d ever been he’d calm you down.

‘He always knew the right thing to say. He was a really interesting person, everything about him was just intriguing.’

Mr Cordingley’s dad, Leon Doyle, also paid tribute to his son, adding: ‘To my beloved son whom had everything to live for, the world will be a darker place without him.’

Several other friends, including Daniel Sharples, Mr Cordingley’s ‘best friend in the whole world’, who had known him for 21 years, paid tribute to him.

Mr Sharples said: ‘Darney was my best friend ever, the most down to earth and kind person you would ever meet. He cannot be replaced and I will miss you always.’ 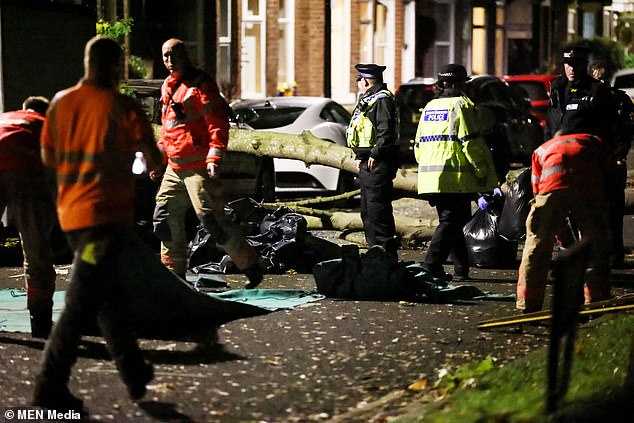 One of Mr Cordingley’s long-term friends, Sam Smart, was also hurt in the accident and remains in hospital. Pictured are workers dealing with the tragedy’s aftermath 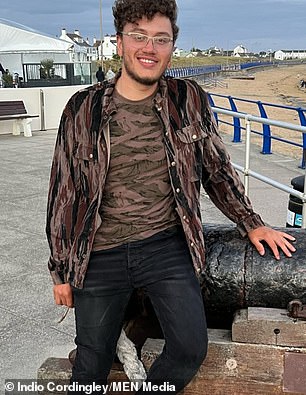 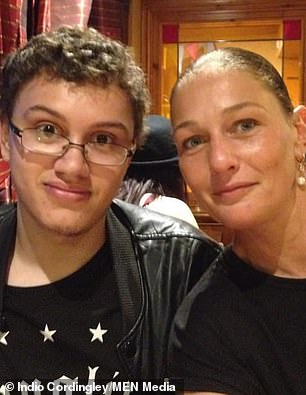 The straight-A student, from Altrincham, was studying directing and film at the University of Central Lancashire in Preston. He was described by his mother, Beth (pictured with her son, right) as ‘the apple of my eye, my world and my strength’ 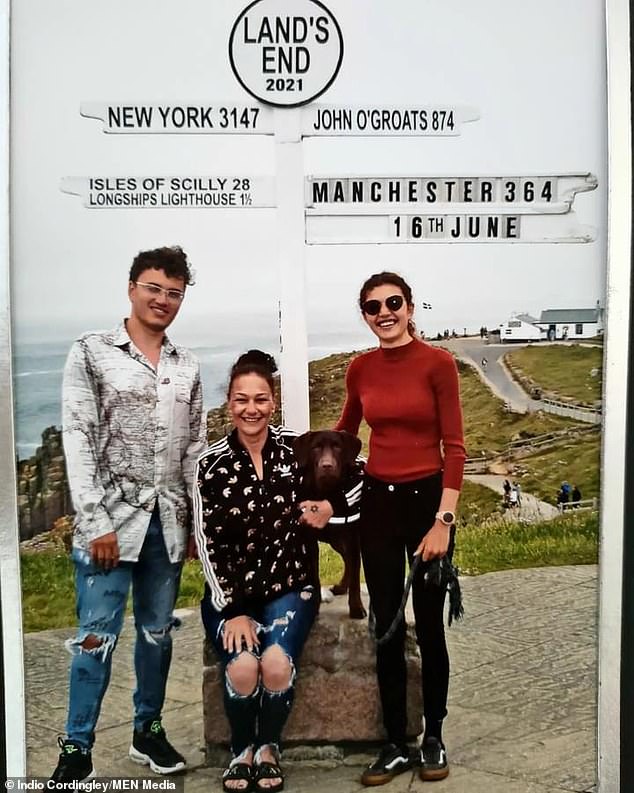 Mr Cordingley’s sister Indio, pictured right, said he was ‘the best big brother anyone could have hoped for’. Mr Cordingley is pictured with his mother Beth, middle, and Indio, on a family trip to Land’s End, in Cornwall

Tom Bennion and Kieran Mather, another two of Mr Cordingley’s best friends, said: ‘Darnell was the kind of person that didn’t care about what anyone thought of him, he just did what made him happy and got on with his life and helped anyone he could along the way. We’ll miss him so much.’

Mr Smart, who was with Mr Cordingley when he died away, had to be taken to hospital after being badly injured during the incident, where he remains.

Mr Smart’s girlfriend, Hannah Seager, said: ‘Sam and Darnell have been friends since they were teenagers. It’s such an awful situation. Darnell was always there for Sam and always giving him advice, it was quite a brotherly relationship.’

A fundraising page for Mr Cordingley’s family has been set up by Emma Beesley, a close family friend, to help pay for the funeral and help his loved ones.

A post on the page read: ‘Our beautiful Darnell has been taken from us in such an unexpected and tragic accident, his amazing mum has to now deal with planning a funeral for her baby boy, as a parent nobody thinks about this let alone has to face the reality of actually doing it.

‘I am asking for help to raise funds to give our Darns the send of he truly deserves, please think about donating no matter how small so that we can try to take some unnecessary stress away from them. Darnell was such a gentle and beautiful soul and I myself am struggling to find the right words to say.’

Mr Cordingley’s mother and sister also thanked everyone who had reached out to pay tribute to him, including people who had been involved in the tragic incident.

Beth added: ‘As a family we want to thank everyone for the heartfelt tributes and the kind words, generosity and kindness people have shown us. A lot of people we don’t even know have contacted us, people who were involved in the incident, who lived nearby. Two good friends of ours have not left our sides since. Thank you to everyone.’