Jerusalem: In a Facebook post a few days ago, one of the Israeli Prime Minister's sons said he hoped the deaths of two Israeli soldiers killed by a Palestinian gunman in the West Bank would be "avenged" and said, "There will never be peace with the monsters in human form known since 1964 as 'Palestinians'."

In other posts, Yair Netanyahu, the older son of Benjamin Netanyahu, said he would prefer an Israel without any Muslims and mused that no attacks occurred "in Iceland and Japan where coincidentally there are no Muslims." 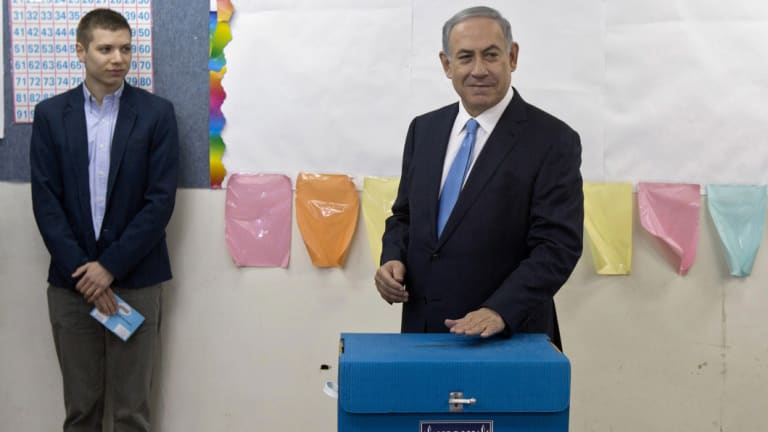 Israeli Prime Minister Benjamin Netanyahu, right, votes in Jerusalem in 2015, as his son Yair watches. Yair is no stranger to controversy, having been accused of living it up on tax payers’ expense.Credit:AP

Facebook removed the posts after a flood of complaints, saying they "included hate speech" and clearly violated the community standards. On Sunday, after Yair Netanyahu reposted a screenshot of one of the offending posts online and called on people to share it, the social networking giant suspended his account for 24 hours.

There he reposted a diatribe he had written against Facebook, describing it as "thought police" and protesting that it hosted "endless pages that call for the destruction of Israel and the murder of Jews."

After a series of angry tweets, in the early, almost Trumpian, hours of Monday morning, he concluded: "I basically hate leftists to the same degree they hate me. And I wish for them exactly the same as they wish for me." 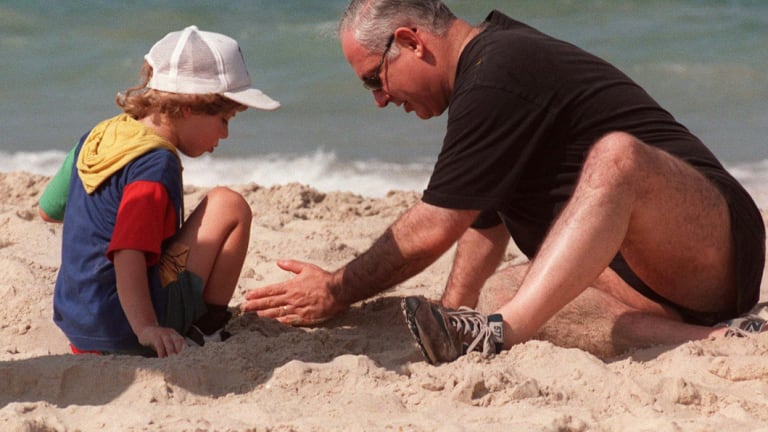 Israeli Prime Minister Benjamin Netanyahu plays in the sand with his son Yair at the beach in 1997.Credit:AP

Israel's first son, often in the headlines, is hardly new to controversy or vitriol and has long espoused hard-right views on social media. But his blunt online presence is increasingly raising questions in Israel about the blurred lines between the public and private personas of what some cynics refer to as Israel's royal family, which has reigned over Israel continually for almost a decade.

"Of course he's not a private person; he is being paid for by the Israeli taxpayers," Tal Schneider, the political and diplomatic correspondent for Globes, an Israeli financial newspaper, said in an interview.

Schneider noted that at age 27, Yair Netanyahu still lives with his parents, in the Prime Minister's official residence in Jerusalem, and is provided with a state-funded car and a secret service escort wherever he goes. 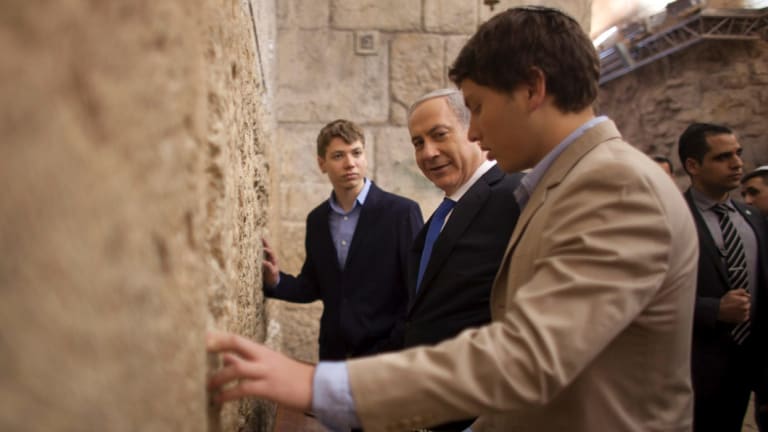 Social media has already amplified Israel's evermore toxic discourse, but this latest spurt by the younger Netanyahu comes as his father, beleaguered by corruption investigations and facing possible bribery charges, is in an election year. He is fighting for a fourth consecutive term in office, and a fifth overall.

Some Benjamin Netanyahu critics have been waiting for the father to disavow his son's latest posts, something that has occasionally happened in the past. But there has been mounting speculation in the news media over whether the younger Netanyahu's posts may actually reflect his father's own sentiments. Some wonder what kind of values the son has soaked up at home and what sort of conversation might take place at the family's Friday night dinner table.

"This is, I think, one of closest people to the Prime Minister," Schneider said. Whatever Yair Netanyahu says, she argued, may indicate what he's hearing at home, or conversely, what he's bringing home. "It goes in two directions," she said.

Some of Yair Netanyahu's social media posts, she said, like one a month ago, when Benjamin Netanyahu's coalition was teetering, turned into official talking points of the Prime Minister and his conservative Likud Party within hours. 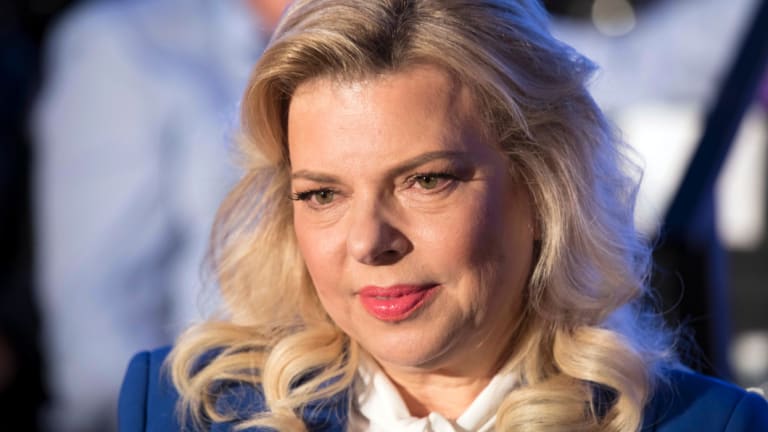 Saturday's Meet the Press program on Israel's News Channel devoted nearly 15 minutes to a panel discussion of whether Yair Netanyahu's messages harmed his father or helped him by serving as "trial balloons for his base". It highlighted several recent examples of Netanyahu's pronouncements echoing his son's Facebook posts, sometimes almost word for word.

One member of the panel, Nissim Douek, a strategic consultant, said many Israelis were "disgusted" by Yair Netanyahu's extremist, divisive rhetoric.

Aviv Bushinsky, a former media adviser to the Prime Minister, defended the Netanyahu family, pointing to wayward children of other veteran politicians. Bushinsky accused the Prime Minister's opponents of using Yair Netanyahu as a tool to batter his father. What "the child" had to say, Bushinsky contended, was "not interesting and not relevant."

The Netanyahu family's spokesman declined to comment publicly on Yair Netanyahu's status or his spat with Facebook.

Facebook said in a statement that it had removed his three posts as it would "for anyone posting similar content about any protected characteristic." Reposting the screenshot, the company said, "is the same as writing the hate speech all over again. Facebook does not allow hate speech on the platform and will continue to enforce its policy."

The company rejected Yair Netanyahu's assertions that it was censoring his criticism of it.

After a period of unemployment, the Prime Minister's son began working in recent months as the social media manager of Shurat HaDin, a law centre that describes itself as "utilising court systems around the world to go on the legal offensive against Israel's enemies."

The line between public and private has also been muddied by Israel's first lady, Sara Netanyahu, who faces charges that she misused some $US100,000 ($139,000) in public funds in her management of the official residence. Two domestic workers have won damages in lawsuits accusing her of abusing them.

When Sara Netanyahu has been put under an unflattering spotlight, compared at times to Marie Antoinette, the news media has been urged to leave her alone on grounds that she is not a public figure. But this month she travelled with an official Foreign Ministry delegation to Guatemala, a visit the Prime Minister's office described as being of great "diplomatic importance."

No stranger to provocation and often portrayed as a spoiled heir apparent, Yair Netanyahu also came under scrutiny last year when he posted, then removed, a meme, captioned "the food chain", featuring George Soros, Ehud Barak and a reptilian creature that drew on classic anti-Semitic tropes.

The latest controversy seems to have begun December 10, when Yair Netanyahu appeared in court to testify in a libel case he filed against a social activist who he says wrote false information about him on Facebook, and was heckled by protesters. Later that day, he wrote another provocative post on Facebook, calling all left-wing nonprofits "funded by foreign and hostile governments," politicians on the left and the liberal media "traitors."

After a public outcry, the prime minister posted a response on Facebook saying he rejected the use of the term "traitor" on all sides of the political debate. He went on to show clips of the times the term has been used against him — echoing the earlier post of his son.