Has Beijing tested a submarine nuclear missile that can reach North America? ‘Military sources’ claim new bomb can wipe out cities and US army bases, but Chinese media slams report as fake

According to the report, first published by Washington Free Beacon on Tuesday, the JL-3, or Julong-3, is designed to be fired from the Type 096 nuclear ballistic missile submarine, which can carry up to 24 missiles.

The Type 096 is under construction and would be ready in 2020, the report said. 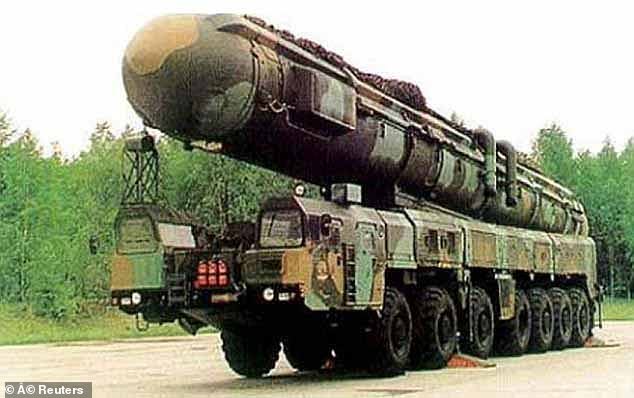 Previous reports have suggested that JL-3 was an improved version of Beijing’s DF-41 ballistic missile (pictured). DF-41 is said to have the longest range of any ballistic rockets in the world

Washington Free Beacon claimed that the deadly missile, whose name is said to be ‘giant wave’ in Chinese, was being built near Dalian on China’s eastern coast and the flight test was likely to take place on November 22.

The report also quoted a Chinese military who said the JL-3 would have a full operational range of between 7,456 miles and 8,700 miles, which is enough to destroy targets in most part of the United States from Chinese coasts.

The allegedly test of the missile has also been reported by The Diplomat.

The current-affairs magazine reported yesterday that Beijing conducted the flight-test of the JL-3 ballistic missile in the Bohai Sea. However, it claimed that the test took place on November 24, citing U.S. intelligence agencies.

The report also said JL-3 did not fly to its full range during the test, but its full range was likely to be farther than 9,000 kilometres (5,592 miles).

China has never openly confirmed the development of JL-3. Nearly all of the information of the missile on the Chinese internet is cited from U.S. media reports. 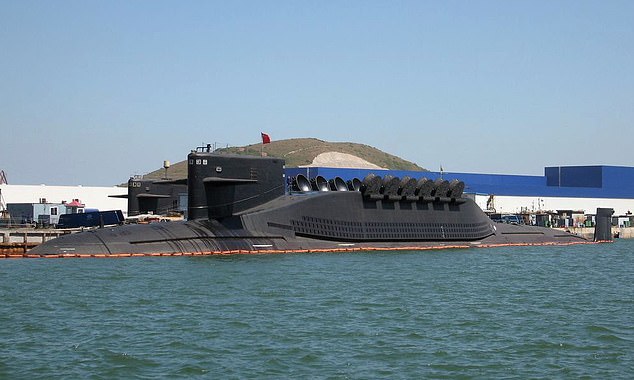 Chinese media Sina Military said Beijing would begin building the Type 096 nuclear submarine in a few years while U.S. Department of Defence said in its annual report this year that the construction would start in 2020. Pictured is a Type 094 submarine from the Chinese navy

The missile is potentially capable of sinking a U.S. Nimitz-class aircraft carrier in a single strike, media have claimed.

The DF-10 missile, on the other hand, is the best performing long-range cruise missile in the world, according to Chinese news site Sina.com.

To start with, Julong does not translate to ‘giant wave’ in Chinese, said the Chinese outlet, indicating that the report could not be true because the author could not even get the name of the missile properly.

According to Washington Free Beacon, Xi visited a submarine base in June and said: ‘As a nation’s ultimate instrument, submarines shall see great developments.’

Xi also reportedly said: ‘Our seaborne nuclear forces need to advance by leaps and bounds. We pin our hopes of development and advancement on your era so that our navy and our submarine forces shall have a rapid rise.’

Shanghai Observer critised the Washington Free Beacon author of fabricating the comments, saying ‘we could not find such sentences in the report from Xinhua News Agency (China’s state news agency)’.

According to Chinese media, Xi visited the naval base of the northern war zone of China on June 16. Reports said he boarded a nuclear submarine, coded Changzheng 16, but no such comments from him were published during the visit.

Previous U.S. reports have suggested that JL-3 was an improved version of Beijing’s Dongfeng-41, or DF-41 ballistic missile. DF-41 is said to have the longest range of any ballistic rockets in the world.

JL-3 was also mentioned in this year’s annual report about China from the U.S. Department of Defence to the U.S. congress.

This contradicts the reports from Washington Free Beacon and The Diplomat which claimed that the Type 096 submarine was being constructed already.

According to a report from Sina Military in July, Beijing will begin building the Type 096 submarine ‘in a few years’.