Opening up school playgrounds to the public could provide tens of thousands of people in Melbourne with much-needed parklands during the coronavirus lockdown, new analysis shows.

About 458,000 people live more than 400 metres from open space, the study has found, just as Melbourne turns to public parks for exercise, sun and socialising during the city’s extended COVID-19 lockdown.

Their analysis found that 185,000 people live near schools, within the state government "walking distance" definition of 400 metres.

About 29,000 people also live alongside golf courses, which have already been eyed off in a debate on whether to share the green space during limited hours.

Glen Eira would benefit the most from opening up the spaces, followed by Boroondara, Bayside, Moreland, Monash, Moonee Valley and Stonnington council areas.

The researchers used data from the 2016 Census, the Victorian Planning Authority and OpenStreetMap to work out how many people have parks close to home. Statistical area 1 data from the Census allows detailed analysis down to the location of between 200 and 800 people.

Dr Blackham said the pressure points varied. Some residents could live next door to a park in a suburb where most other people lived more than 400 metres away, for example.

But there are hotspots of poor access in the inner-northwest (in Moonee Ponds and Essendon for example) and a huge swathe of the southeast (including at St Kilda East, Ormond, Oakleigh, Hughesdale and Huntingdale).

“There's some real issues around vandalism and safety and liability that would need to be worked through. But I suppose the reason that we've done this work is to show that, compared to buying back large tracts of land, there is a relatively easy way of providing access to open space in some of these areas, which currently don't have it,” he said. 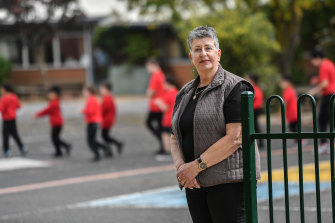 Loretta Piazza, principal of Meadowglen Primary School: ‘They can still jump the fence these days, but people don’t.’Credit:Joe Armao

In Meadowglen in Melbourne's outer north, just about every person was found to have open space close to home.

Local primary school ovals are fenced off but Meadowglen Primary School principal Dr Loretta Piazza said there may be a mood for change. She said there has been no vandalism for years.

“They can still jump the fence these days, but people don't, they are far more respectful of the school and appreciative of what's around them,” Dr Piazza said. 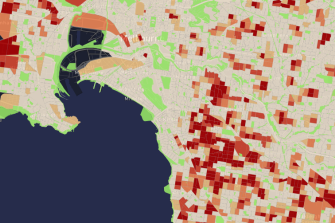 Analysis down to a fine detail shows that many people in Melbourne’s south-east don’t have parks within 400 metres of their home.Credit:Dr Dom Blackham and Dr Petter Nyman

“So I really wouldn't be adverse to, especially our local community, coming in and taking advantage of the facilities that we have here at school.”

Dr Piazza said that it was not something schools would be able to resource by themselves, particularly during the school holidays when no staff were around.

The Department of Health and Human Services said that it was up to each school to decide whether it could open its grounds, but it would require daily cleaning during the pandemic. 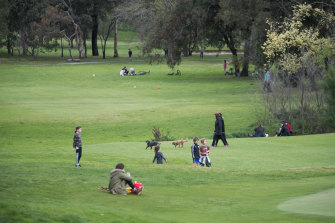 “While a lack of open space is a genuine issue for some communities, this is a town planning problem that’s the responsibility of local and state governments,” Ms Green said in a statement.

“Opening up school grounds to general use is problematic and complex. This applies to all schools, regardless of sector.”

Camberwell Primary School has previously opened up play equipment to the public, but it has been sealed off during the pandemic so that students have a safe and sanitised environment.

“If the government preferred we open up the school grounds, we would have to have a very different process in place [to] ensure that we were sanitising surfaces throughout the school, which I would imagine would be quite time consuming,” principal Janet Gale said.

"We've always kept the school open [before COVID-19] because in Camberwell there is so little area for children to go to, so we feel it's a community obligation to provide that for children."

The analysis does not consider how big the open space is — a sprawling open space or pocket park, for example — or how many people depend on it.

PhD candidate Julianna Rozek, from the RMIT Centre for Urban Research, has previously analysed different data to rank the number of square metres of open space available per person in each Melbourne suburb.