Britain faces further torrential rain across large swathes of the country over the next few days along with hail, thunder and snow, bringing even more misery to flood-hit communities after more heavy downpours overnight.

Nearly 300 flood warnings or alerts remain in place today, while up to 4in (100mm) of rain – or a month’s worth – is expected to fall in parts of Wales before the weekend and 65mph gusts are set to sweep in to Scotland tomorrow.

It comes as Conservative MPs in flood-hit constituencies around the country criticised the Government’s slow financial response to the crisis and urged Whitehall to make more money available for flood defences.

Jeremy Corbyn has slammed the Prime Minister for not visiting flood-hit communities. The Labour leader also said Boris Johnson was showing his ‘true colours’ by not convening the Government’s emergency committee Cobra.

Thousands of properties have been evacuated across England and Wales after the weekend weather chaos led to ‘unprecedented’ flooding, while officials warned the further bad weather has created a ‘heightened flood risk’.

After three days battling against rising water levels, six severe flood alerts – meaning there is a ‘risk to life’ – remained in place last night along the Severn and Wye rivers, which have reached record-breaking levels. 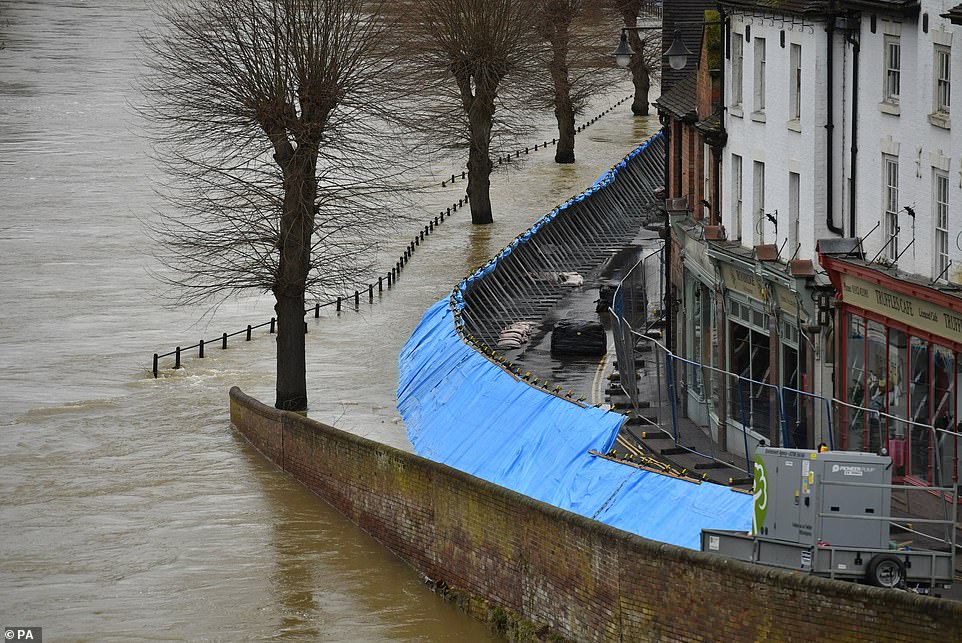 Temporary flood barriers hold back the River Severn in Ironbridge, Shropshire, yesterday in the aftermath of Storm Dennis 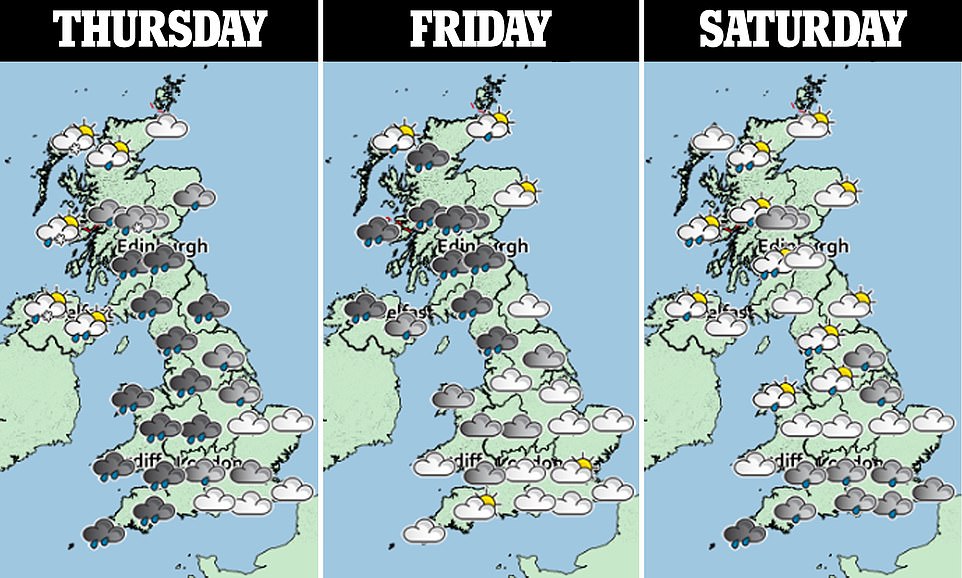 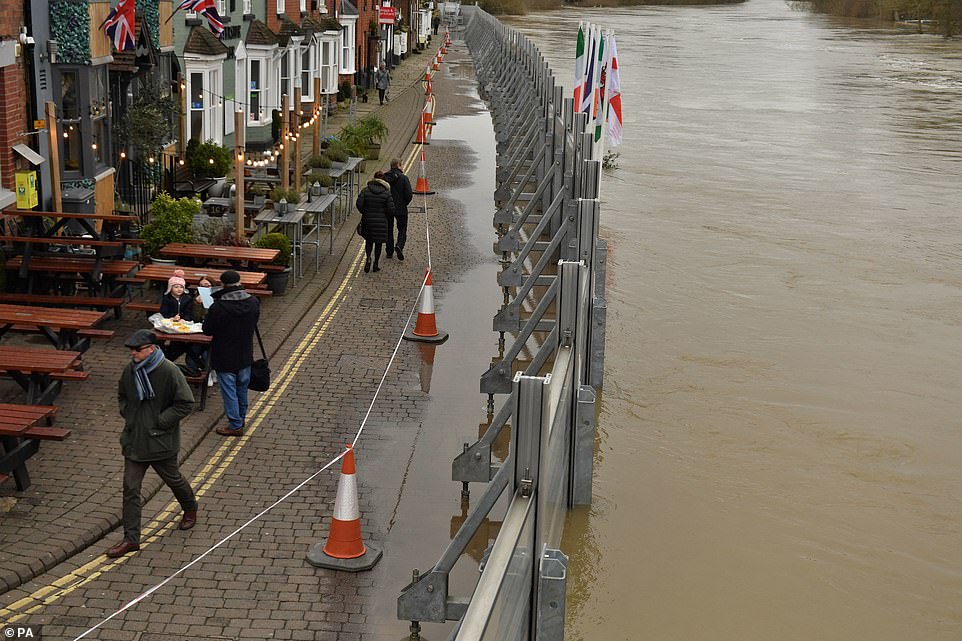 People eat in front of temporary flood defences in Bewdley, Worcestershire, yesterday in the aftermath of Storm Dennis 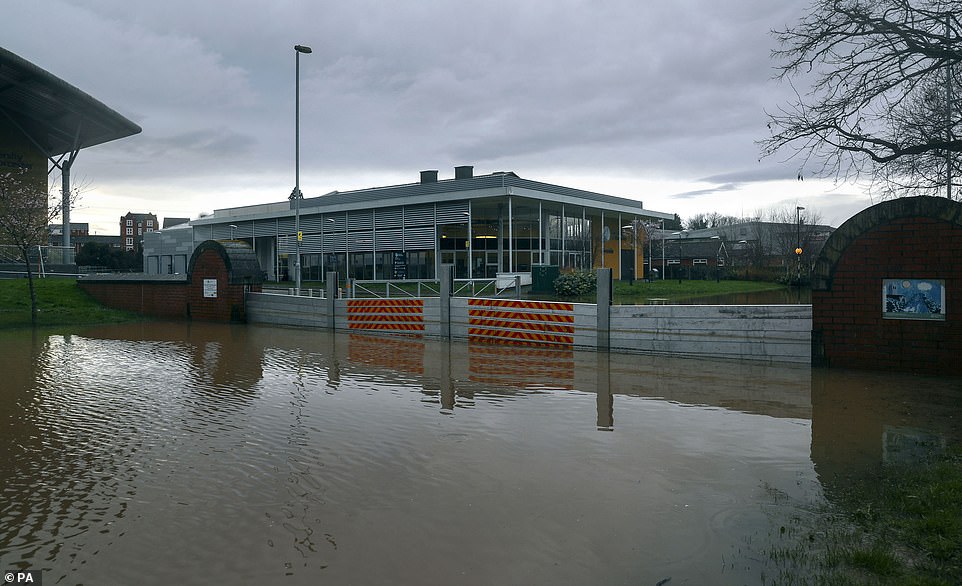 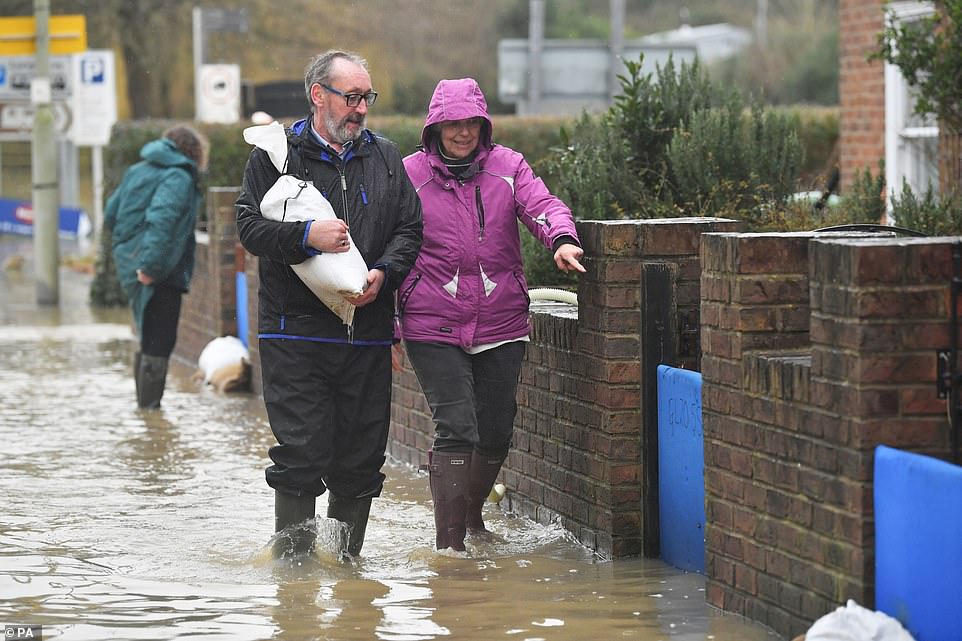 Residents picking up sandbags in Tewkesbury, Gloucestershire, yesterday where pumps and flood barriers have been put in to help to keep the water from flooding homes following the aftermath of Storm Dennis

England has already received 141 per cent of its average February rainfall so far this month, with river levels in the Colne, Ribble, Calder, Aire, Trent, Severn, Wye, Lugg, and Derwent all setting new records in recent days.

Forecasters warned that heavy rain could fall on areas where the ground is already saturated from Dennis and Storm Ciara, which struck just a week before.

Last night, rescuers were searching for a missing 87-year-old woman named Jean Disney who is feared to have fallen into the River Exe near her home town of Tiverton, Devon.

It came as residents in Ironbridge, Shropshire, breathed a sigh of relief after emergency flood defences managed to keep the swollen Severn at bay – although some properties in the area still experienced flooding. 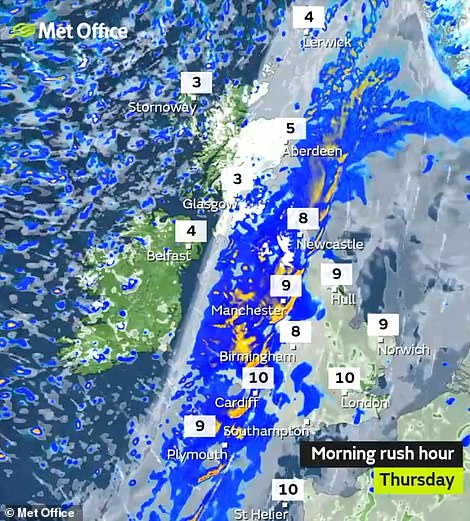 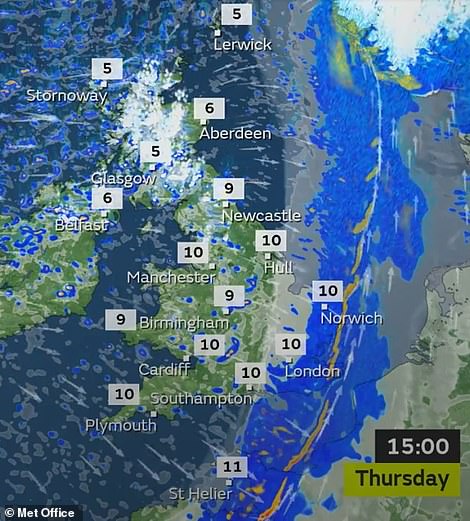 A band of rain is hitting much of western Britain this morning along with snow (left), which continues this afternoon (right) 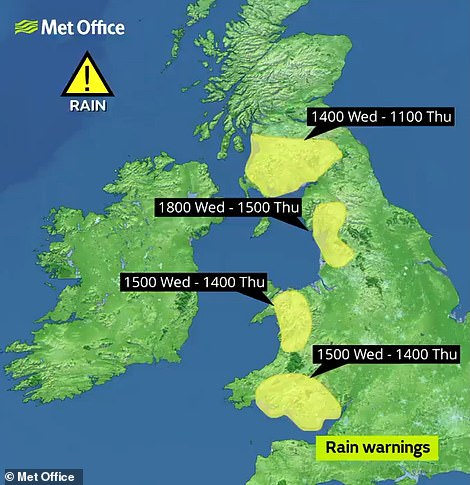 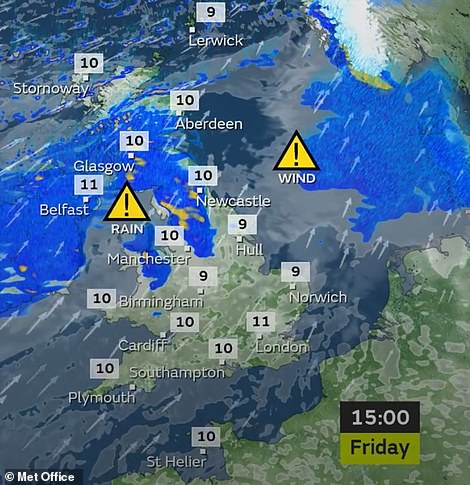 The Met Office has issued a series of rain warnings across the country (left), with more due tomorrow in some areas (right)

Up to 30 riverside properties were evacuated amid fears that water could breach barriers and engulf the town. But only a handful of homes were affected as the Environment Agency said its protective measures had so far worked. 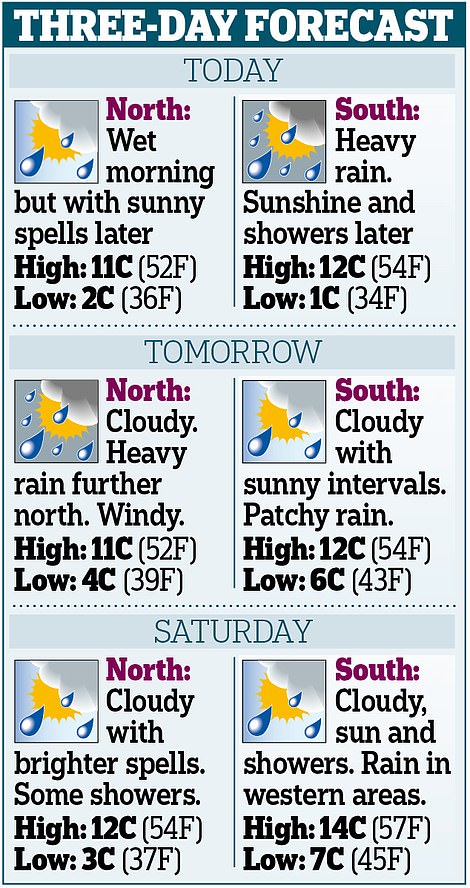 There was further relief in Bewdley, which straddles the Severn north of Worcester, after defences ‘held up’ despite water reaching near-record levels.

Met Office heavy rain warnings are in place today for parts of Wales, which has experienced some of the worst flooding.

There are further rain warnings in place for north-west England and southern Scotland today, as well as Yorkshire and the North East tomorrow.

Craig Snell, from the Met Office, said: ‘Hot on the heels of Storm Dennis, we have now got this next weather system coming through. ‘We have a cluster of warnings around the UK. In the worst case scenario, we could see a month’s worth of rain.’

Storm Dennis has been linked to five deaths and the Environment Agency yesterday said that 645 properties in England had been flooded. Kate Marks, of the agency, said that although Storm Dennis had long passed ‘we’ll be feeling the impacts for a few more days’.

She added: ‘There’s a lot more water in the river systems. In particular, we are worried about the rivers Severn, Teme and Wye.’

Rain fell heavily across northern and western parts of Britain overnight, Met Office forecaster Mark Wilson said, adding it was likely to continue until about 3pm.

The village of Capel Curig in North Wales received 2.1in (54mm) of rain in 24 hours, compared to an average of 3.8in (97mm) of rain for the whole of February.

Cumbria’s Shap, which recorded 4.7in (120mm) across February 2019, saw 2in (52mm) fall before day broke today. But some relief reprieve was on the way later in the day, Mr Wilson said. 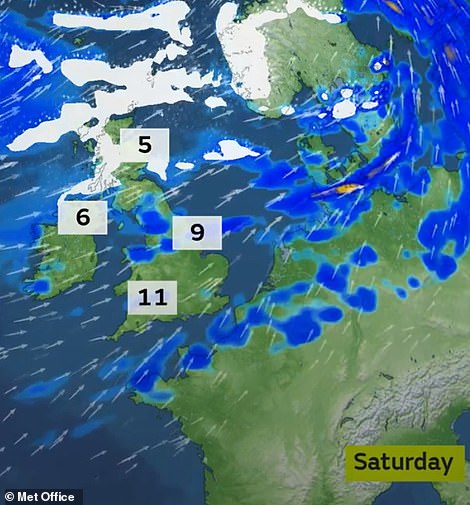 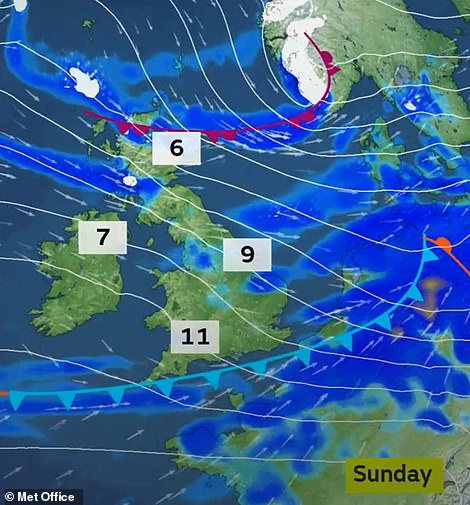 Windy and wet conditions will continue on Saturday and Sunday (above), with further snow expected in parts of Scotland

‘The rain will clear through the west in the afternoon then through the southeast later,’ he said. People can look forward to ‘sunshine and showers’ later in the day, the forecaster added. 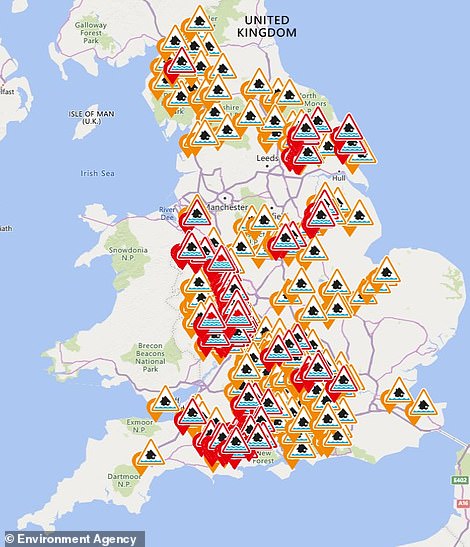 There are nearly 300 flood alerts (amber) or warnings (red)

More weather warnings are likely tomorrow with heavy rain expected across western Scotland, Yorkshire and parts of Cumbria. Gusty winds are also expected to strengthen at the end of the working week.

Mr Wilson urged people to be mindful of warnings as they go about their day. ‘There could be some pretty tricky conditions on the roads, make sure you give yourself a bit more time with travel because there’s some fairly heavy rain around,’ he said.

Meanwhile, fundraising efforts have continued for those affected by the floods, with multiple communities in Wales starting collections.

Yesterday, Good Omens actor Michael Sheen launched a campaign to raise money for affected communities in Wales, raising half of its £10,000 goal within the first five hours.

The Scottish Environment Protection Agency has issued flood alerts for 11 areas, including Dumfries and Galloway and the Borders, plus seven more serious flood warnings for areas around the River Tay and Pitlochry in Perthshire.

A Met Office spokesman said: ‘Continued unsettled weather in Scotland could deliver further impacts, particularly in the areas worst hit by recent storms. We are also tracking an area of low pressure which appears to be heading for North West Scotland on Monday.

The seven deaths during storms Ciara and Dennis

‘ This will bring strong winds to Northern Ireland and the West Coast of Scotland. There is general agreement it will result in wet and windy conditions but its potency has yet to be verified.’

There is speculation that this could lead to the fifth-named storm of the winter, which would be named Storm Ellen.

He told BBC Radio 4’s Today programme he had been ‘hammering on doors on Whitehall’ since the flooding began ten days ago to get ministers to trigger its emergency funding scheme, which was finally announced on Tuesday night.

His West Yorkshire constituency saw almost 1,200 properties flooded when Ciara dumped 4in of rain in less than 18 hours.

Mr Whittaker said: ‘The sad thing is all this funding package announced last night comes from about seven different departments and when you don’t have a situation where you’ve got all ministers in one room, getting them to sign off is just incredibly difficult.’

Shrewsbury’s Tory MP Daniel Kawczynski yesterday said he would be lobbying for extra money to pay for better flood defences and to compensate businesses affected.

He said: ‘If we can afford £106million for HS2, then I think we can afford funding from Defra [Department for Food and Rural Affairs] for more flood alleviation schemes.’

On Tuesday, Communities Secretary Robert Jenrick said he would release state aid for flooded homes and businesses worth up to £5,000 per property.

Jeremy Corbyn has criticised the Prime Minister for not visiting communities affected by flooding.

The Labour leader also said Boris Johnson was showing his ‘true colours’ by not convening the Government’s emergency committee Cobra.

Mr Corbyn is due to visit South Wales today to meet residents and volunteers in communities affected by Storm Dennis. Ahead of the visit, he said areas most vulnerable to flooding had been ‘badly let down time and time again’.

He called the Government’s response to recent flooding ‘wholly inadequate’ and accused ministers of failing to grasp the scale of the climate crisis.

‘In refusing to visit flood-hit communities, nowhere-to-be-seen Boris Johnson is showing his true colours by his absence,’ Mr Corbyn said.

‘Failing to convene Cobra to support flood-hit communities sends a very clear message: if the Prime Minister is not campaigning for votes in a general election he simply does not care about helping communities affected by flooding, especially communities that have repeatedly been flooded in recent years.

‘I want to thank our emergency services, the Welsh Labour government, local authorities and volunteers who have come together and worked around the clock to protect homes and businesses from flooding.

‘As the climate crisis deepens, extreme weather conditions will become more frequent and severe. The Government’s response has been wholly inadequate and fails to grasp the scale of this crisis.’

On Tuesday, Plaid Cymru leader Adam Price also questioned why the Prime Minister had not called a Cobra meeting.

Environment Secretary George Eustice said: ‘Jeremy Corbyn shouldn’t be trying to politicise the floods, he should be backing the Government’s move to support and work with emergency personnel who are working tirelessly to help everyone affected.

‘We are investing £2.6 billion in flood defences, which have already protected 200,000 properties that would otherwise have been caught out by flooding.

‘We know there is more to do – which is why our manifesto committed us to an additional £4 billion for flood defences and today we’ve set out new measures to help the communities directly affected.’