Paul Brown, 48, dubbed postal staff "lazy and thoughtless" after he collected enough rubber bands to make a ball the size of his own head over a six-year period. 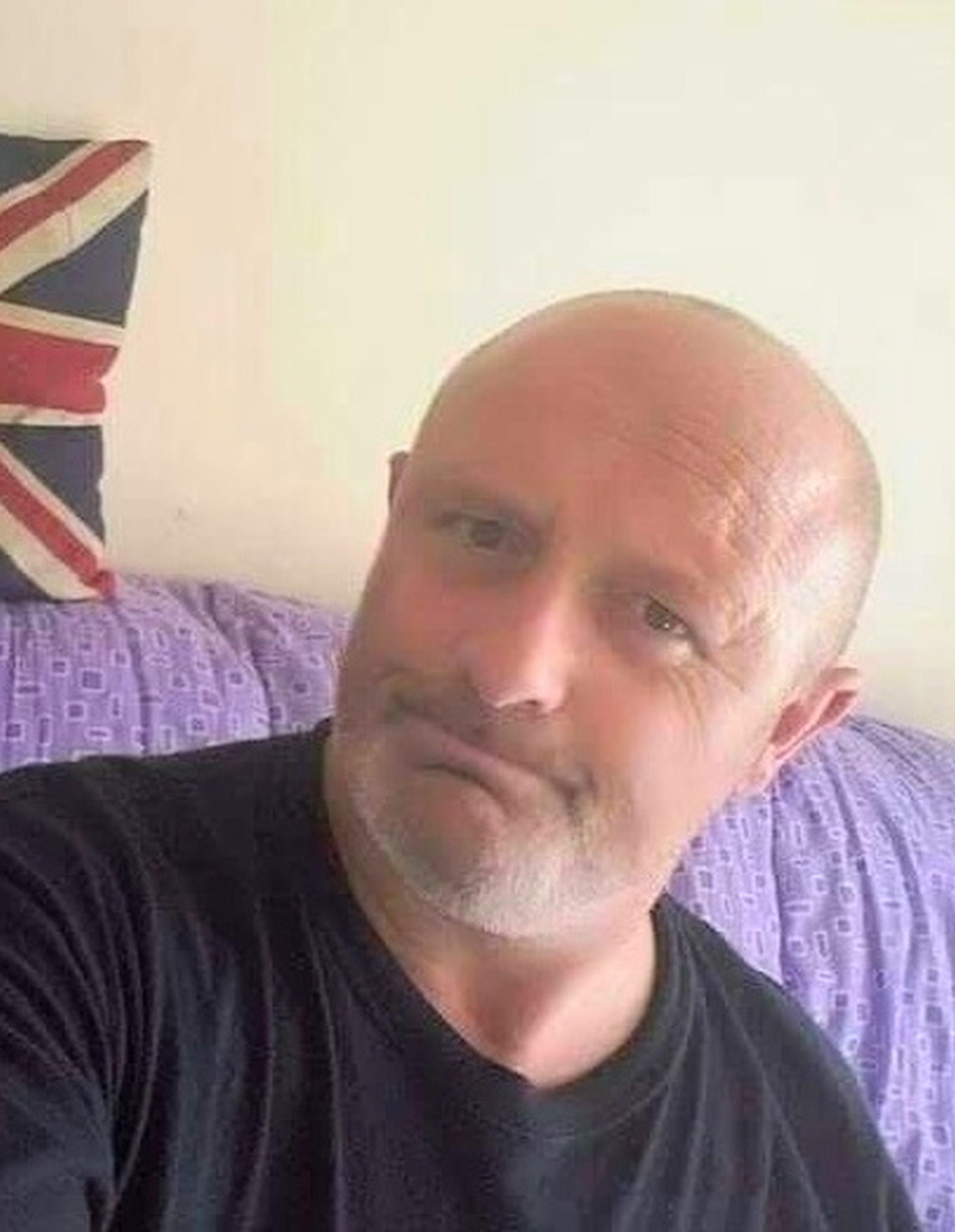 His dogged obsession in collecting the bands saw him originally snooping for them at weekends but after being "unable to stop thinking about them" he began doing it daily.

And now the Wirral-based collector has called on the government to issue the eye-watering £800,000 charge – an £80 littering fine for every band he's picked up off the floor.

In the foul-mouthed rant, Paul claimed he had even found a band in his cat's litter tray after it was eaten – but admits he didn't use that one for the giant ball.

Paul, from Wallasey, Merseyside, took to social media to vent his wrath at Royal Mail over the bands, and claims the end of his street is their "favourite place" to "intentionally" leave them. 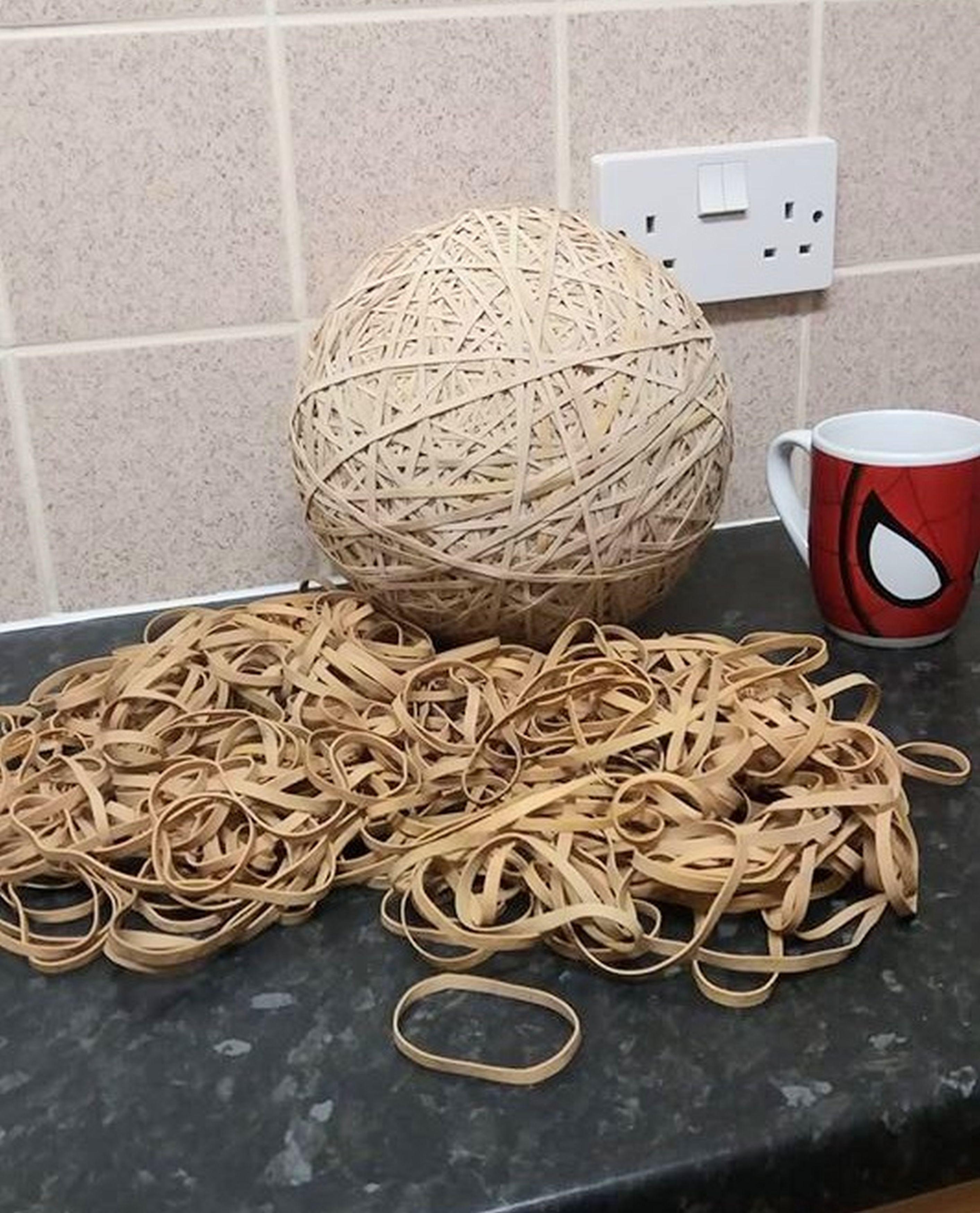 However numerous post men and women rushed to the Royal Mail's defence – pointing out that they would not be dropped deliberately and that they were in fact bio-degradable.

A furious Paul said: "This is what p***es me off when it comes to Royal Mail.

"I know the streets are already full of litter but more and more of us are trying to do something about it.

"But not Royal Mail. Rubber bands – the strangest place I found one was in the cat litter, in the cat's sh**e.

"He'd eaten it and fortunately it came out again. I threw that one away. My local council gives out £80 on the spot fines to people for dropping litter so I estimate that there must be 10,000 rubber bands here at £80 each.

"That comes to £800,000 and that's just what I've picked up. And hedgehogs get caught up in them and can't free themselves and it often kills them.

"It's disgusting and they should make it policy that this stops right now.

In response to his post, others rushed to the defence of postmen and women arguing that they didn't do it intentionally and the bands are biodegradable.

Paul replied: "I started picking them up on weekends but soon found myself thinking about it all week and before I knew it I was doing it every day.

Angry mail staff were eager to correct Paul for tarring all workers with the same brush and claimed they always tried to pick up the bands where possible.

Karen McLean said: "I'm a Postie and believe me, we don't do it intentionally.

"Sometimes you don't know you have dropped elastic bands as they do snap.

"I always pick mine up but you don't always notice it and we have to re-use them so they are liable to snap easily and are very painful when you are at the sharp end of it."

Hamish Butler said: "I am a postie. It's not Royal Mail at fault, we are told all the time to make sure we don't drop elastic bands on the streets.

"Unfortunately a lot of posties just don't [bother] and here lies the problem."

However Paul hit back, adamant that the posties were dropping them on purpose and dlieberately choosing the end of people's streets as their 'favourite place'.

Paul said: "[Of] course they do it intentionally. Why not re use them and save a few quid? Do their bit.

"It would be so easy… and besides that, it's illegal. How dare they be so lazy and thoughtless.

"Piles of them at the ends of every street is their favourite place to do it. I've seen them do it."

In response to Paul's concerns, Royal Mail claimed they had introduced biodegradable bands and encouraged people to reuse them wherever possible.

A spokesperson for Royal Mail said: "Royal Mail recognises that rubber bands that litter the ground present a threat to wildlife as well as representing a needless expense.

"Every year, we use around 338 tonnes of elastic bands to keep bundles of mail together.

"In 2016-17, we reduced the number of rubber bands we purchased by eight per cent. We achieved this reduction by encouraging our people to reuse elastic bands as much as possible.

"We continue to conduct campaigns to raise awareness of this issue and encourage re-use of rubber bands.

"We are also reducing the number of rubber bands we buy, by collecting them from incoming mail at Mail Centres and distributing them to nearby Delivery Offices to be re-used.

"Our elastic bands are biodegradable, helping us to minimise our impact on the environment. The natural rubber content in them means that they will start to biodegrade in an outdoor environment within a year.

"Last year we ran a high-profile campaign to raise awareness amongst employees of the negative impact of littering, including the cost to our business.

"We ask our postmen and women to return all rubber bands to the delivery office for re-use. We also signed a joint statement with the CWU and Unite to encourage our people to re-use rubber bands."