Grace Mugabe could now face prosecution for crimes allegedly committed while her husband Robert was in power following his death today aged 95.

The 55-year-old former secretary, who is known as ‘Gucci Grace’ for her fondness for luxury shopping, enjoyed a lavish lifestyle in a desperately impoverished country.

Grace, who was by her husband’s side when he died in Singapore, had been given immunity along with Mugabe by military authorities in Zimbabwe in November 2017. 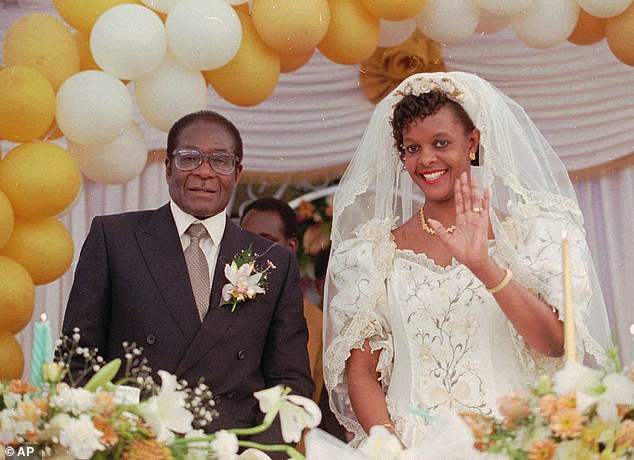 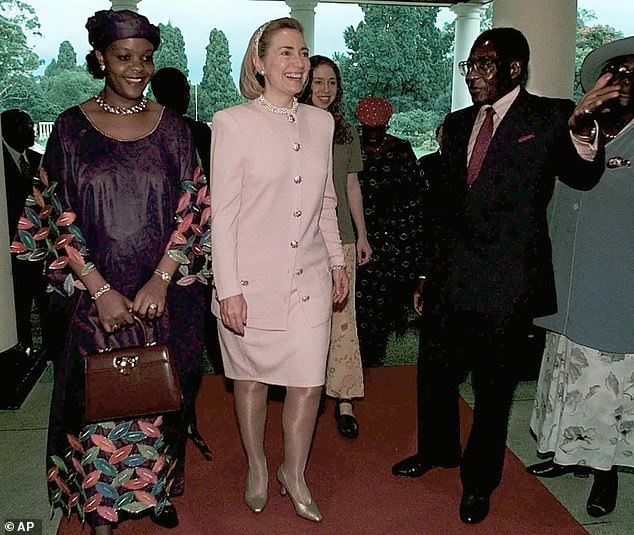 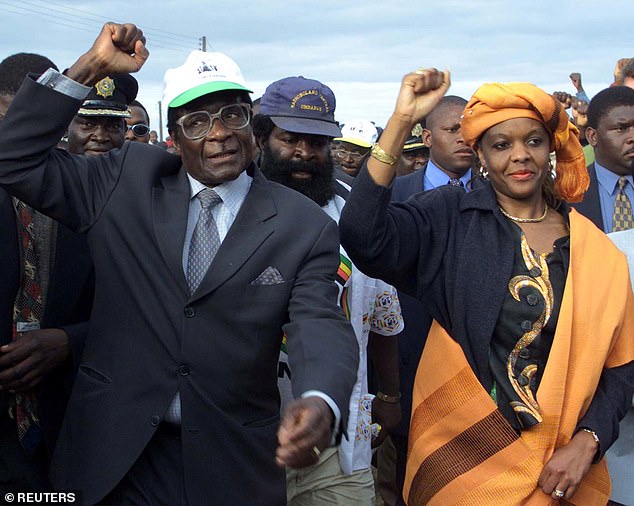 But current president Emmerson Mnangagwa then told the BBC in January 2018 how he had not granted either of them immunity, although they would be ‘left in peace’.

He said they got a ‘lucrative’ retirement package, adding: ‘The new administration will do everything possible to make sure the family lives in peace, undisturbed.’

Among the crimes that Mr Mugabe and his government were accused of – and denied – were human rights abuses such as killing and raping opposition activists.

She has not been charged over the allegations, but Mr Mnangagwa sanctioned the probe after Australian photographer Adrian Steirn uncovered ‘very strong’ evidence. 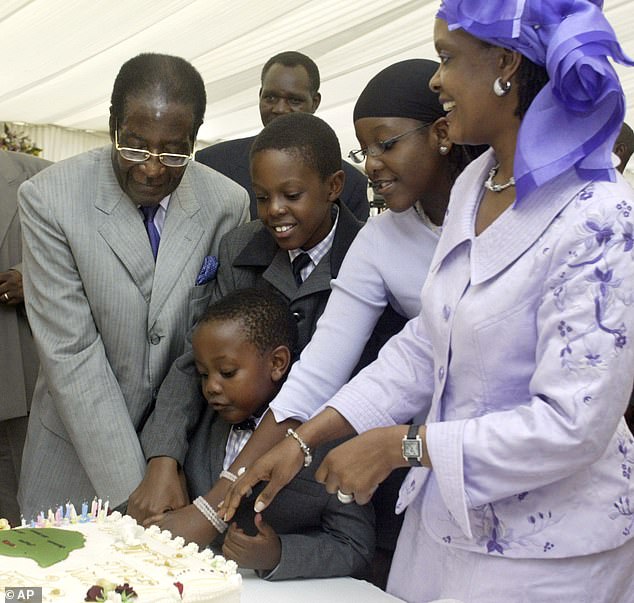 Mugabe cuts his 80th birthday cake helped by his wife Grace, right, his daughter Bona, 2nd right, and his sons Robert Jnr, upper centre, and Chatunga in Kutama in February 2004 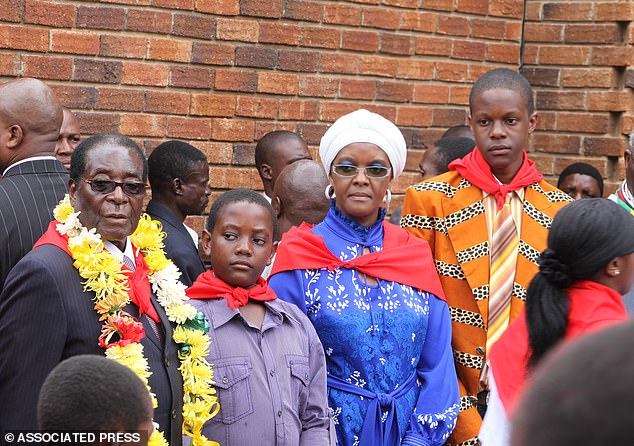 Mugabe, with his family, daughter Bellarmine Chatunga, 2nd left, Grace, his wife and Robert Junior on the right during his 86th birthday celebrations in Bulawayo in February 2010 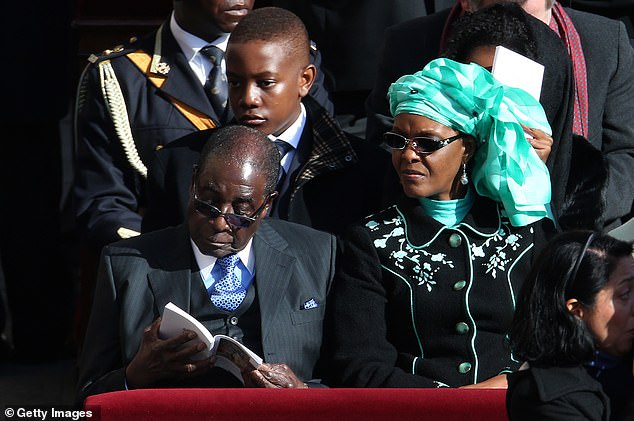 Then in December last year, South African prosecutors issued an arrest warrant for her for allegedly assaulting a model in Johannesburg in 2017.

Mugabe’s decline in his last years as president before he resigned in November 2017 after a 37-year rule was partly linked to the political ambitions of Grace.

She was a brash and divisive figure whose ruling party faction eventually lost out in a power struggle with supporters of Mr Mnangagwa, who was close to the military. 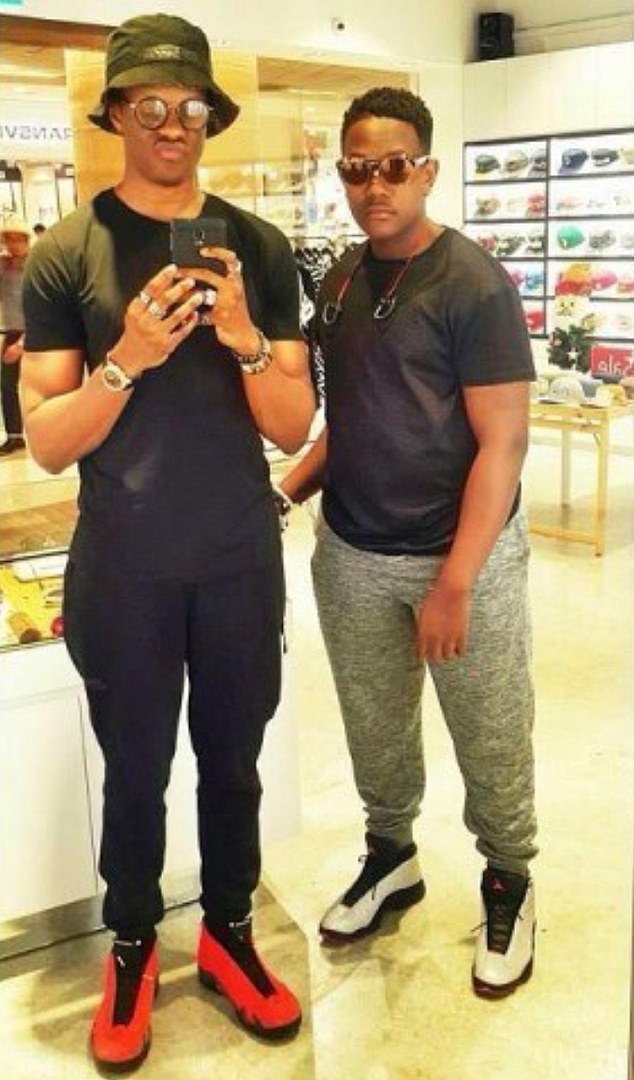 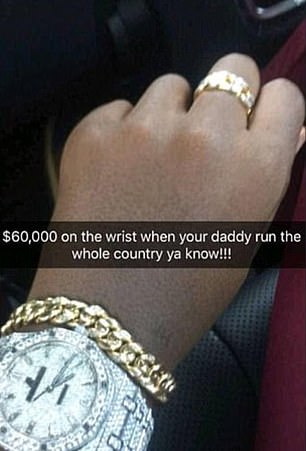 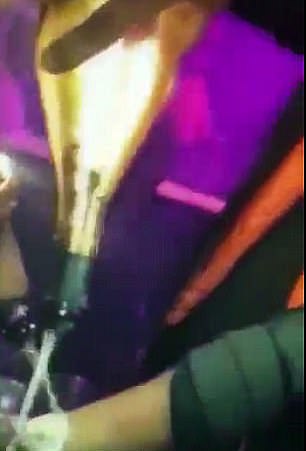 In November 2017, Mugabe’s son Chatunga he was pictured on social media appearing to pour a £200 bottle of champagne over a watch which he claimed was worth £45,000

Grace was Mugabe’s second wife and they married in 1996, having two sons and a daughter. He married his first wife Sally Mugabe in 1961 but she died in 1992.

Mugabe’s sons Robert Jr and Chatunga gained a reputation for their playboy lifestyle, and were evicted from a flat in South Africa in 2017 after it was damaged in a party.

That same year, Chatunga was pictured on social media appearing to pour a £200 bottle of champagne over a watch which he claimed was worth £45,000.

Robert Jr had dreams of a basketball career but US sanctions meant he could not play in America, and he launched a clothing label in December 2017 called xGx.

Mugabe met Grace in the early 1990s when she was one of his shy young typists, but she became an ambitious politician who also wanted to become president. 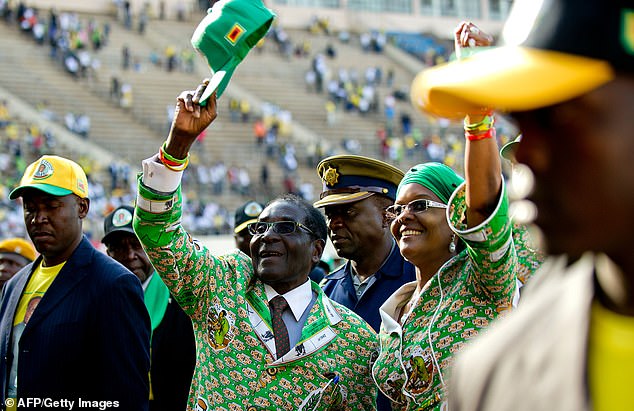 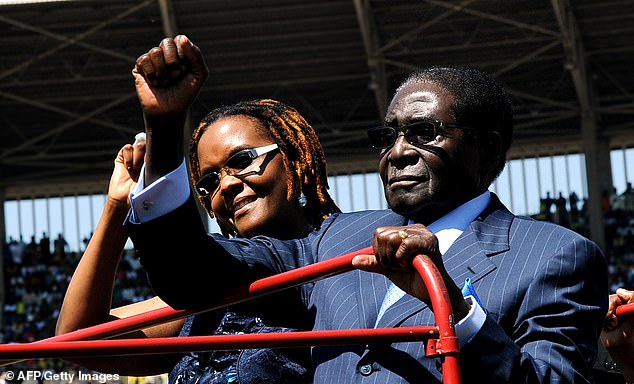 Mugabe, accompanied by wife Grace, raises his fist as he greets the crowd at his inauguration ceremony in Harare at the national 60,000-seat sports stadium in August 2013

Speaking in 2013, she said: ‘He just started talking to me, asking me about my life. I didn’t know it was leading somewhere. I was quite a shy person, very shy.’

Before Mr Mnangagwa took over as president, Grace had been calling for his removal as they fought to take over from Mr Mugabe, who had ruled since 1980.

Mr Mnangagwa was Grace’s sworn enemy – and his aides even accused her of trying to poison him with ice cream from her dairy farm in 2017, which she denied.

In 2014, when it appeared former vice president Joice Mujuru was in line to succeed Mugabe, he fired her following public rallies at which Grace derided Ms Majuru.

When Ms Majuru was removed, Grace became head of the Zanu-PF Women’s League, giving her a seat at the party’s top table. 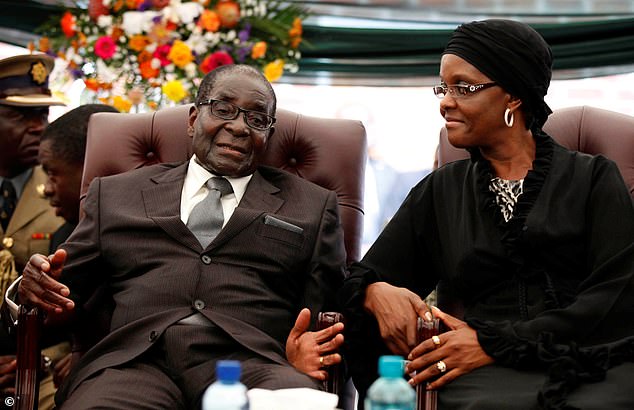 Mugabe speaks to his wife Grace during the funeral of his sister, Bridget, in Zvimba in January 2014 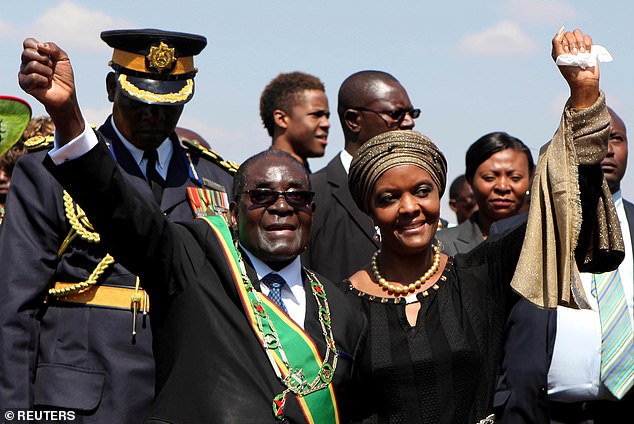 She used her political platform to take on Mr Mnangagwa and famously said at a rally: ‘They say I want to be president. Why not? Am I not a Zimbabwean?’.

Grace had become deeply unpopular among much of the Zimbabwean public due to her alleged corruption and volatile temper by the time Mugabe was ousted.

But at first she stayed out of politics and was known for her spending, including buying rare diamond jewellery and Rolls-Royce limousines for her playboy sons.

Grace owns vast tracks of land in Mazowe, some 20 miles north east of Harare, and is also believed to own houses in South Africa, Dubai and Singapore.

But last December, it was claimed Grace – whose property portfolio is worth more than £50million – had not paid her farm workers for three months. 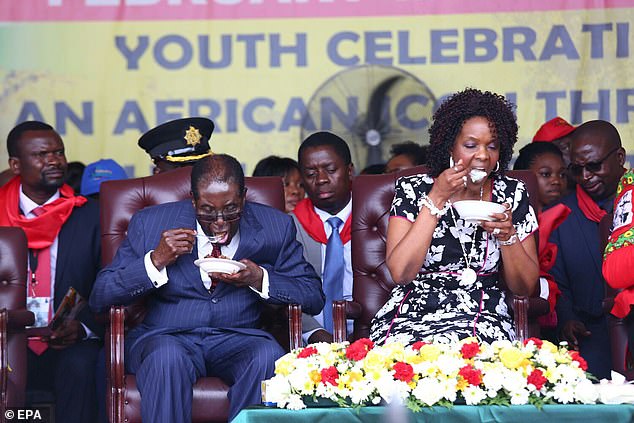 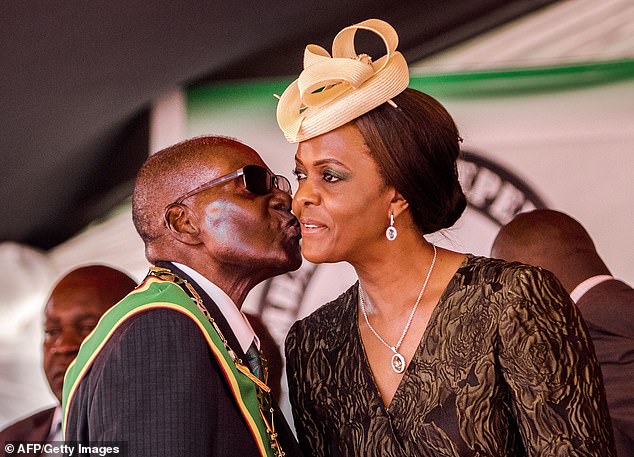 This came after about 400 illegal gold miners invaded one of her farms in March 2018, and allegedly uprooted lemon trees, digging shafts and put gold ore on lorries.

The reports of her lavish spending and explosive temper earned her the title ‘Dis-Grace’ – and eyebrows were raised in 2014 when she gained a PhD in three months.

Her spending was an uncomfortable contrast with an economic crisis which left most of the 16 million population mired in poverty and unemployment.

And she has faced allegations of violence in the past decade. In Singapore in 2009, a photographer said Grace flew into a rage when he tried to take her picture. 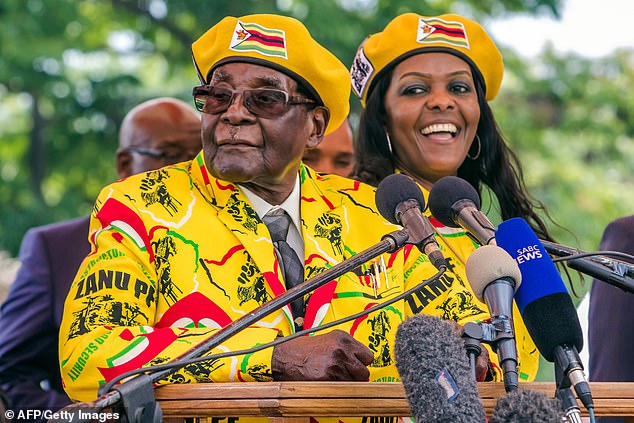 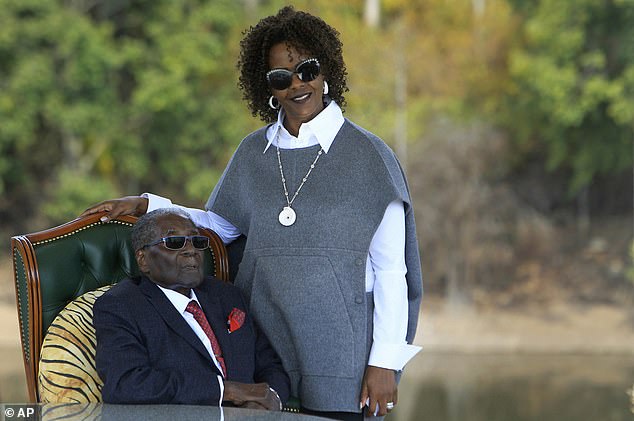 Richard Jones said she ordered her bodyguards to hold his arms back while she punched him repeatedly in the face. Grace denied the assault.

In August 2017, Grace was accused of beating the ‘hell out of’ a young South African model who was partying with her sons in Johannesburg.

According to Gabriella Engels, Grace burst into a hotel room where she was talking with friends and whipped her with an electric cable as bodyguards looked on.

Grace said she acted in self-defence after Engels tried to stab her with a knife. In December 2018, South African prosecutors issued the arrest warrant.