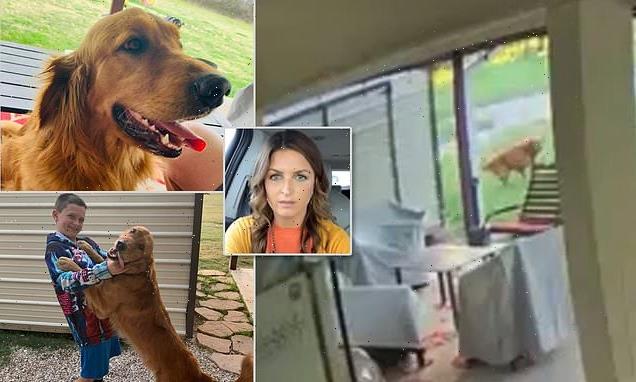 A family has told of their distress at watching their golden retriever get shot and killed over surveillance camera as he played in their garden.

Jessica Millsaps, her husband Jordan and their two sons decided to check in on the one-and-a-half year-old dog, named Jack, on Saturday while on a short camping trip 20 minutes away from their home in Axtell, Texas.

They saw the pup laying on the ground motionless, and grew disturbed when Jack did not respond to their calls from a microphone attached to the camera.

Millsaps says she scrolled back to the previous evening – and was shocked to hear a gunshot ring out, with Jack seen dragging himself across the garden, before collapsing and dying. 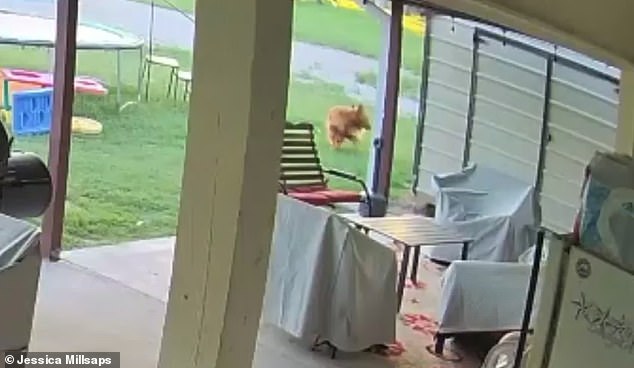 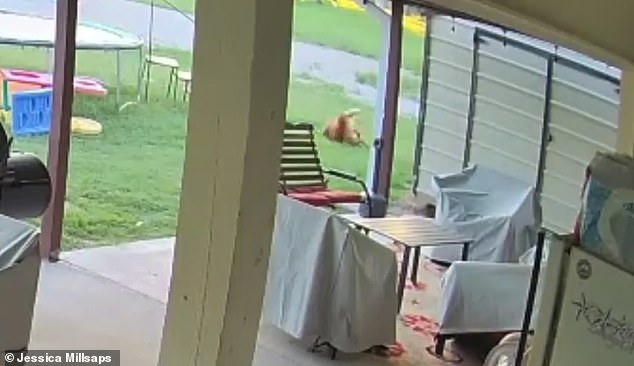 He is then seen falling to the ground, and he stops moving

She shared the distressing clip of Jack’s final moments with DailyMail.com

‘We did see Jack lying in the backyard and we called his name several times, and he wouldn’t get up,’ Millsaps told the Waco Tribune Herald.

They then rewound the tape to just before 7:45 pm on Friday evening, and heard the gunshot ‘loud and clear.’

‘We literally saw him get shot in broad daylight in our backyard, six yards from my back door,’ Jessica wrote on Facebook the following day.

She said she called her mother to go and check on Jack, who confirmed the family pet was dead.

‘My heart was ripped out of my chest,’ she told KCEN TV, noting how difficult it was to tell her two sons that something had happened to their dog.

‘This was their best friend,’ she said, recounting to the Waco Tribune Herald how her 9-year-old ‘just lost it’ and ‘fell to the ground.’

The 18-month-old dog was described as a loving ‘never vicious, but super rambunctious’ dog who ‘loved his humans so much.’

He was left with ‘plenty of food and water’ while the Millsaps were out camping, Millsaps wrote on Facebook, and had a ‘huge covered patio and couches to lay on.’

The spacious seven acre yard yard was protected with an invisible fence, keeping Jack within a 90-foot radius of the house, she said. 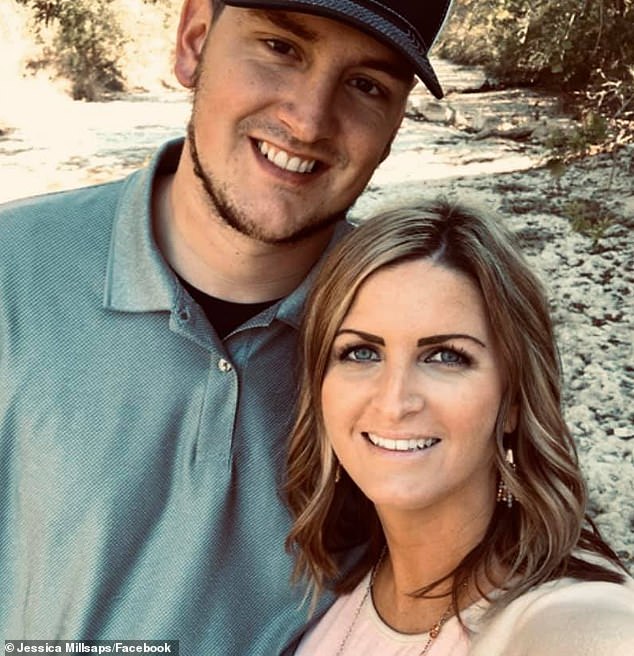 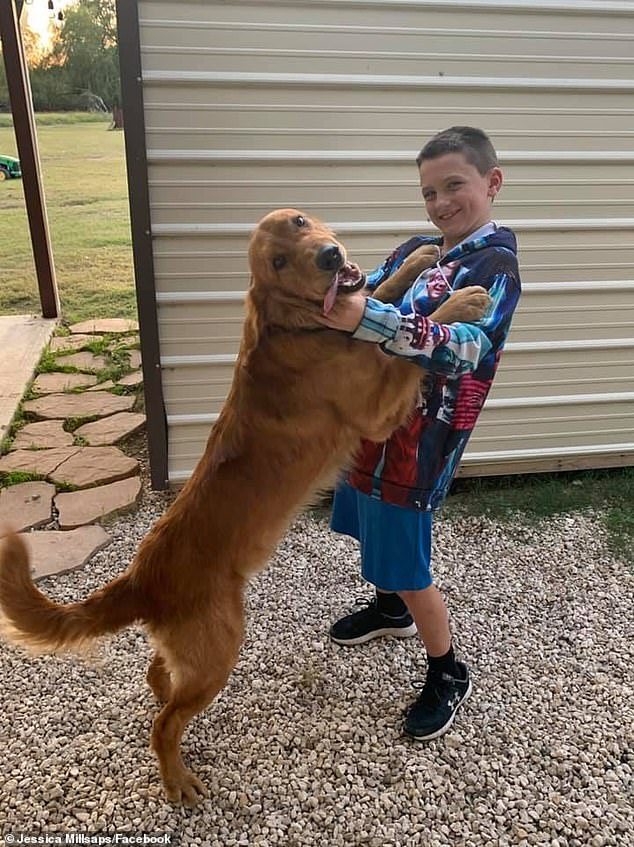 Jessica said it was difficult to explain to her sons, the older of whom ‘fell to the ground’ upon hearing the news of Jack’s demise 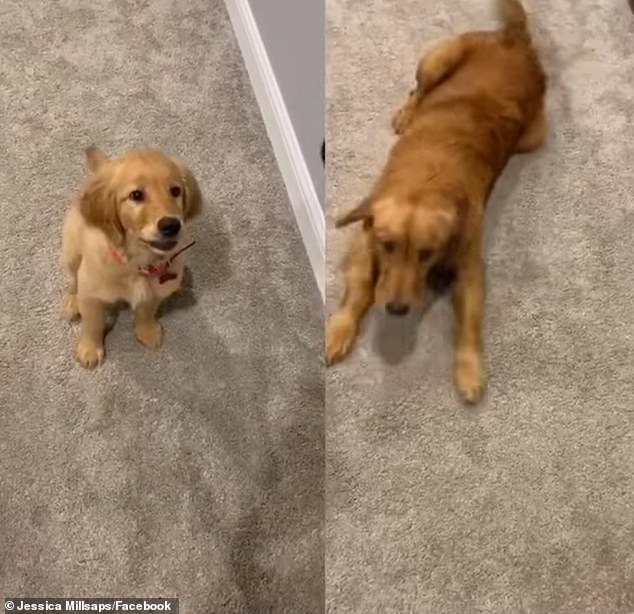 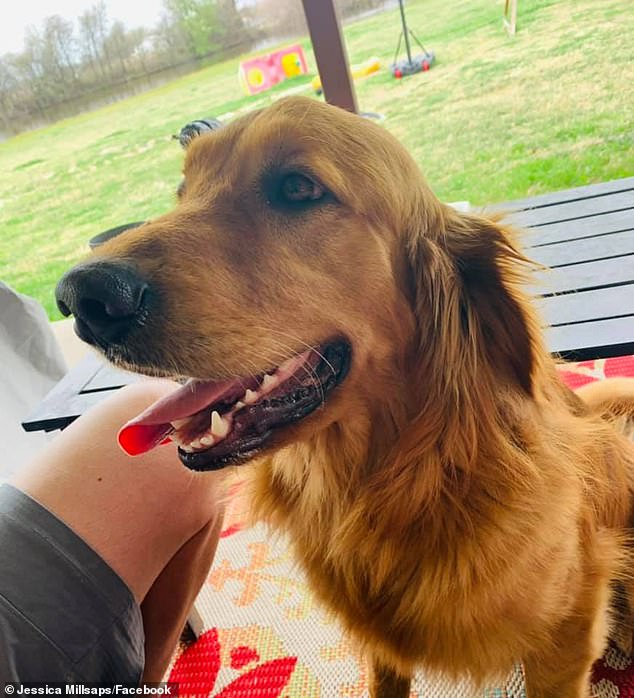 Jack is described as a loving ‘never vicious, but super rambunctious’ dog who ‘loved his humans so much’

Jessica explained that they left him home alone because Jack preferred the garden to being tethered and kept close to his family while visiting a strange location.

Now, the family is calling for justice for Jack.

They called the McLennan County Sheriff’s Office, and filed an animal cruelty report.  Investigators with the sheriff’s office are now investigating the incident.

‘We are investigating very thoroughly,’ Parnell McNamara, the McLennan County Sheriff, told KVUE, ‘and hopefully we will be able to determine who the shooter was.’

‘We have assigned a couple of people in our criminal investigation division that are working on this.’

On Saturday, a deputy with the sheriff’s department collected evidence and took photos of the crime scene, asking the Millsaps for their explanation of what happened.

‘He sounded pretty confident he would get to the bottom of this,’ Jessica recounted to the Tribune Herald. ‘He said they deal more often with these cases than one would expect.’

Millsaps has since told DailyMail.com that investigators are making good progress with their investigation.

She said they have refused to disclose further information on any suspects, or a possible motive, before they have passed the case to prosecutors.

Millsaps, an office assistant, says her children have been left too scared by the shooting to enjoy their own garden.

She added: ‘Our hearts were absolutely shattered. We had to tell my boys after their baseball game and they lost it. That was their best friend.’