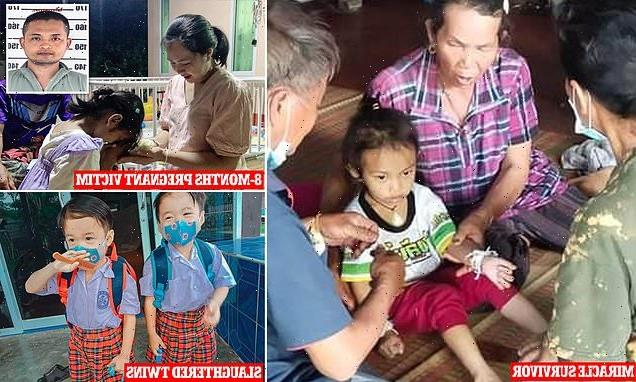 The miracle girl who survived… and the innocents slaughtered by a madman: Girl, three, SLEPT through Thai nursery slaughter with blanket over her head – as first photos of victims including twin brothers emerge

A three-year-old girl miraculously survived Thursday’s Thailand nursery massacre by sleeping with a blanket over her head while her classmates were slaughtered by a madman.

Nong Am was in the nap room with other children when former policeman Panya Khamrab, 34, burst in firing a gun killing at least 37 teachers and pupils on Thursday afternoon in an attack that has shocked the world.

Amazingly, the youngster remained in a deep sleep with the blanket pulled up over her head. While the other youngsters panicked – and were slayed by the attacker – he appeared not to notice the sleeping girl and she made it through unscathed following the carnage.

Her story emerged as pictures of the innocent victims of Khamrab’s rampage began to be released, including a heartbreaking image of two murdered twins and an eight-months-pregnant teacher. Weerapat and Weeraphon Nuatkao, both three years old, and teacher Supaporn Pramongmuk were all among those killed in the massacre.

Survivor Nong Am’s uncle Wutthichai Baothong thanked the teachers at the school for helping to protect her. He said she was the only youngster in the classroom to survive the rampage. He said: ‘It is a miracle from God that saved my niece’s life. Brothers and sisters, out of 30, she was the only one to survive.’

Nong Am spent yesterday being comforted by her relatives – seemingly unaware of the chaos that had unfolded earlier in the afternoon in Nong But Lamphu, northern Thailand.

On Friday, the Thai King and Queen will visit the government-run childcare centre to comfort grieving relatives who are still coming to terms with the worst massacre in the country’s history. 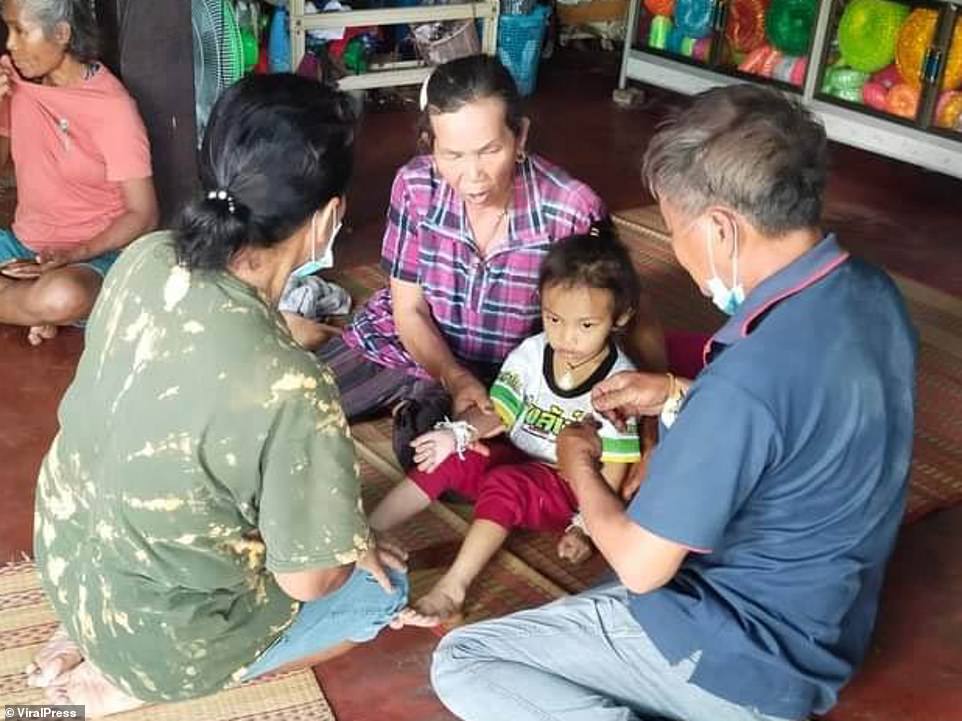 Nong Am  (pictured sitting on the floor) was in the nap room with other children when former policeman Panya Khamrab, 34, burst in firing a gun killing teachers and pupils on Thursday afternoon in an attack that has shocked the world 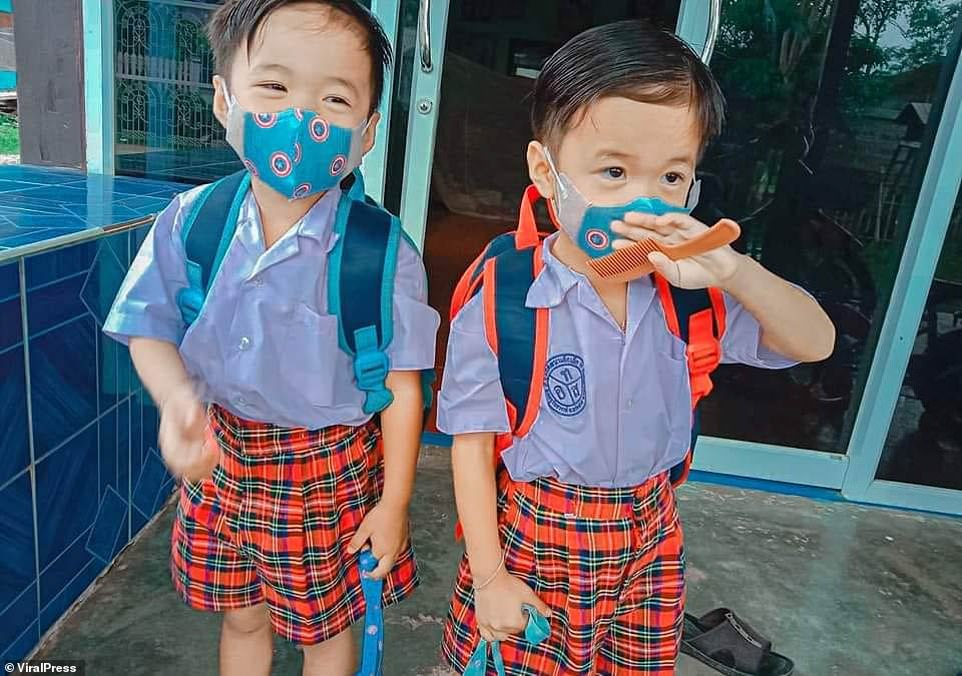 Her story emerged as pictures of the innocent victims of Khamrab’s rampage began to be released, including a heartbreaking image of two murdered twins (pictured). Weerapat and Weeraphon Nuatkao were both three years old 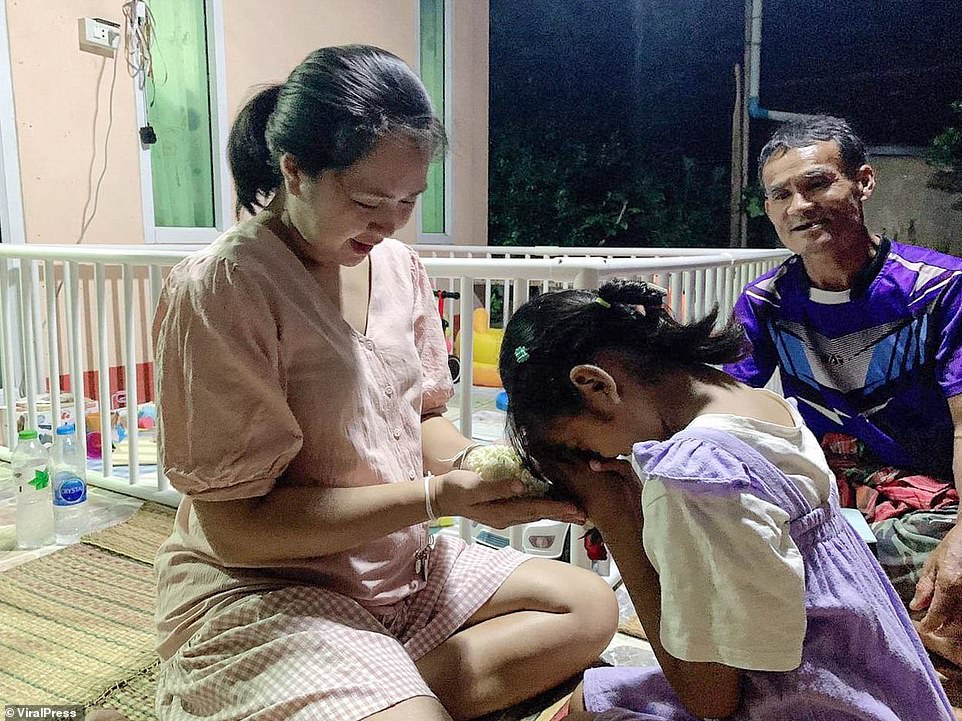 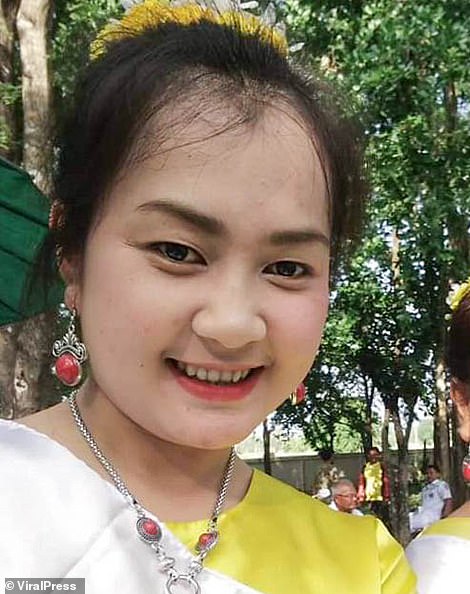 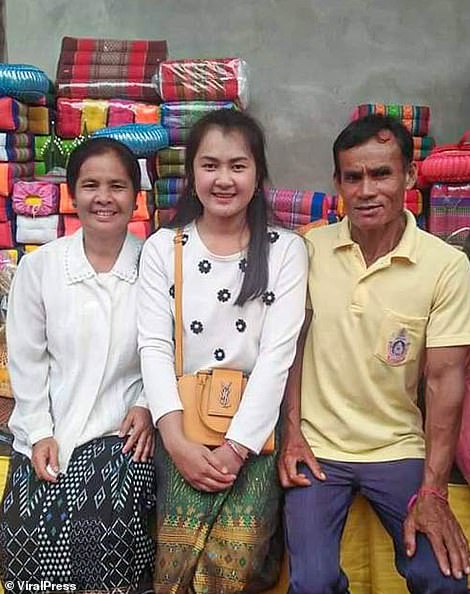 Picutred: Eight-months-pregnant teacher Supaporn Pramongmuk (left and right-middle) who was killed in the nursery massacre on Thursday afternoon in Thailand

News of Nong Am’s miraculous escape came after the coffins of dozens of Thai children and teachers were pictured being carried to a hospital morgue. Emergency services and rescue workers were seen carrying coffins containing the bodies of victims at Udon Thani hospital in Udon Thani province.

Former police officer Khamrab, who later shot his wife and his son when he found him at home, killed 24 children – some as young as two – in the horror massacre, forcing open a locked room decorated with animal pictures and cartoons to knife the sleeping youngsters to death.

Police said the 34-year-old, who had been kicked off the force earlier this year for possession of methamphetamine, appeared at court on Thursday morning on drugs charges before heading to the nursery to collect his child.

When he did not find his child there, he began the killing spree, police spokesperson Paisal Luesomboon said. ‘He started shooting, slashing, killing children at the Uthai Sawan daycare centre,’ Paisal said.

He added: ‘He was already stressed and when he couldn’t find his child he got more stressed and started shooting.’

The killer, armed with a shotgun, a pistol and a meat cleaver, first shot dead multiple adults including an eight-months pregnant woman, before entering the children’s room. 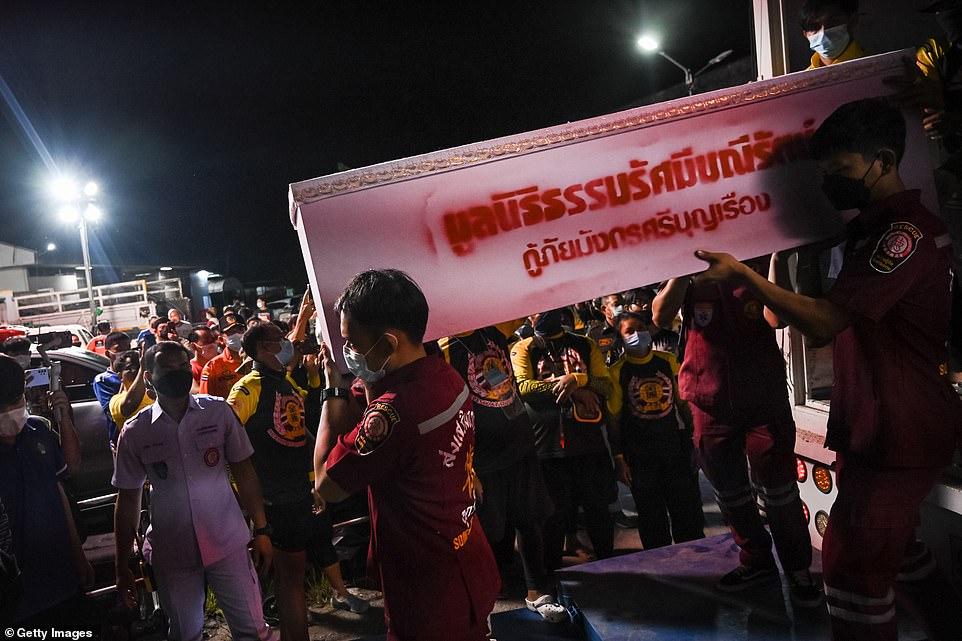 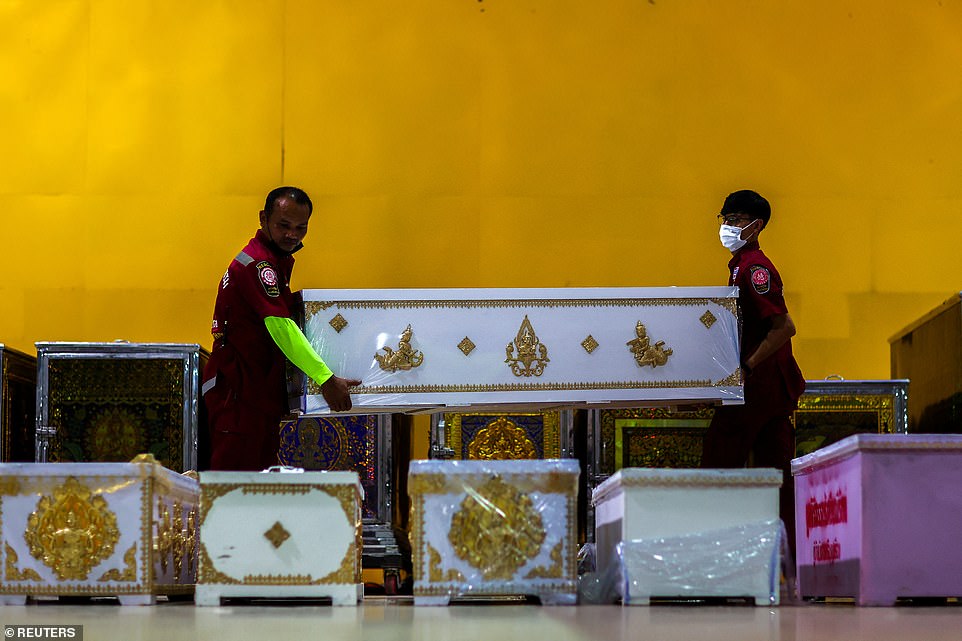 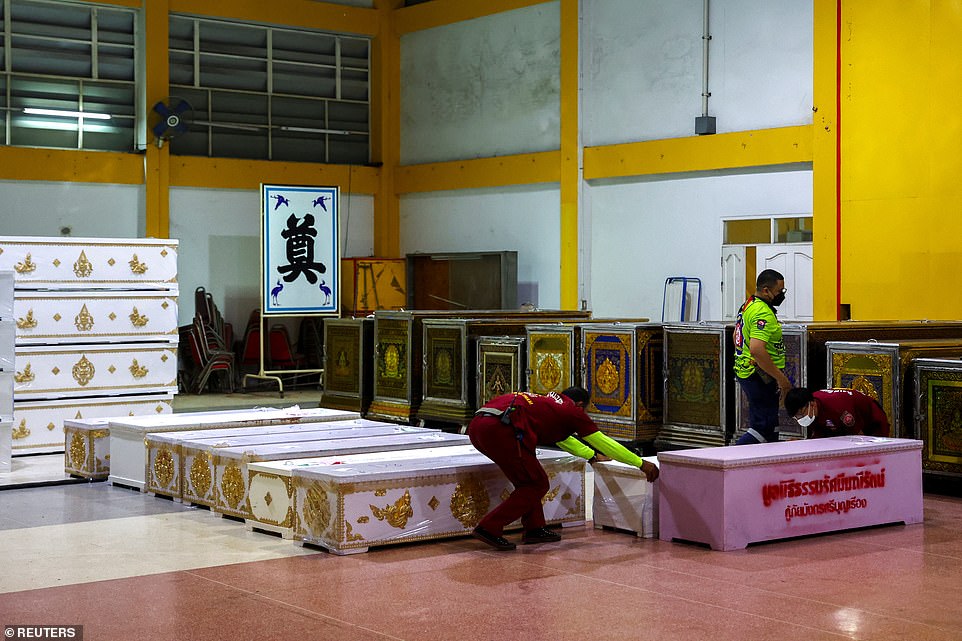 The killer, armed with a shotgun, a pistol and a meat cleaver, first shot dead multiple adults including an eight-months pregnant woman, before entering the children’s room 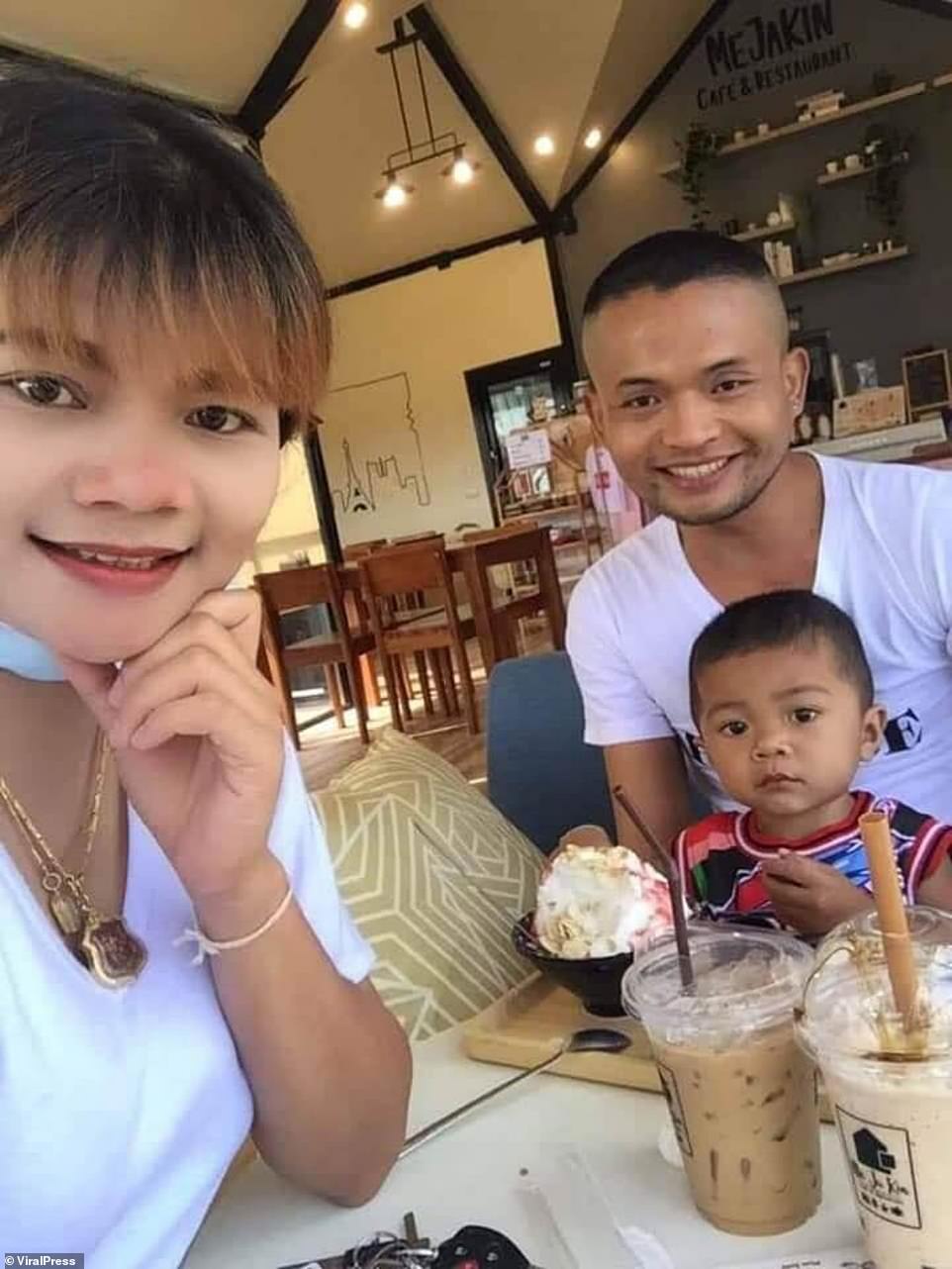 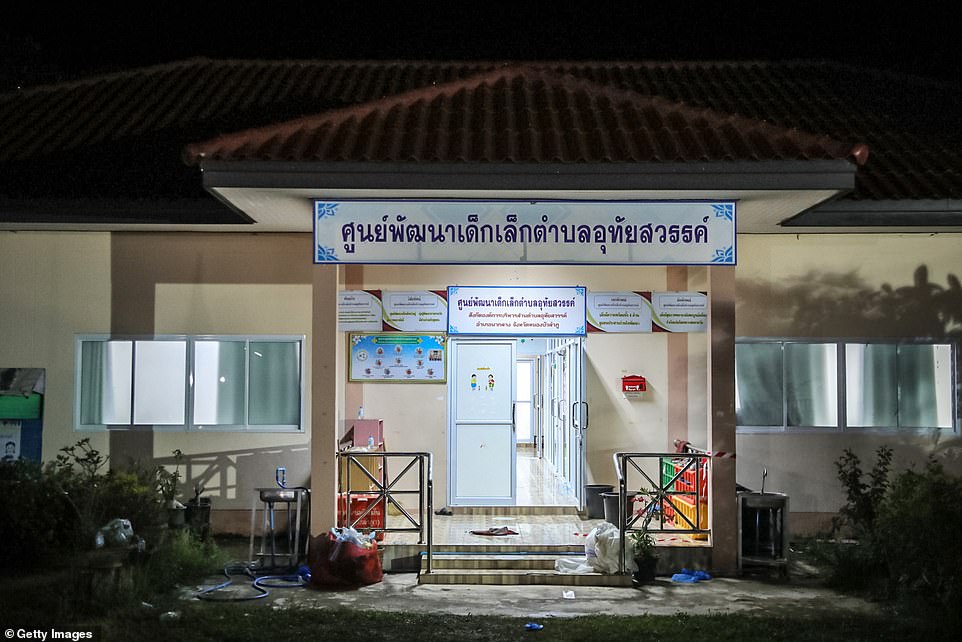 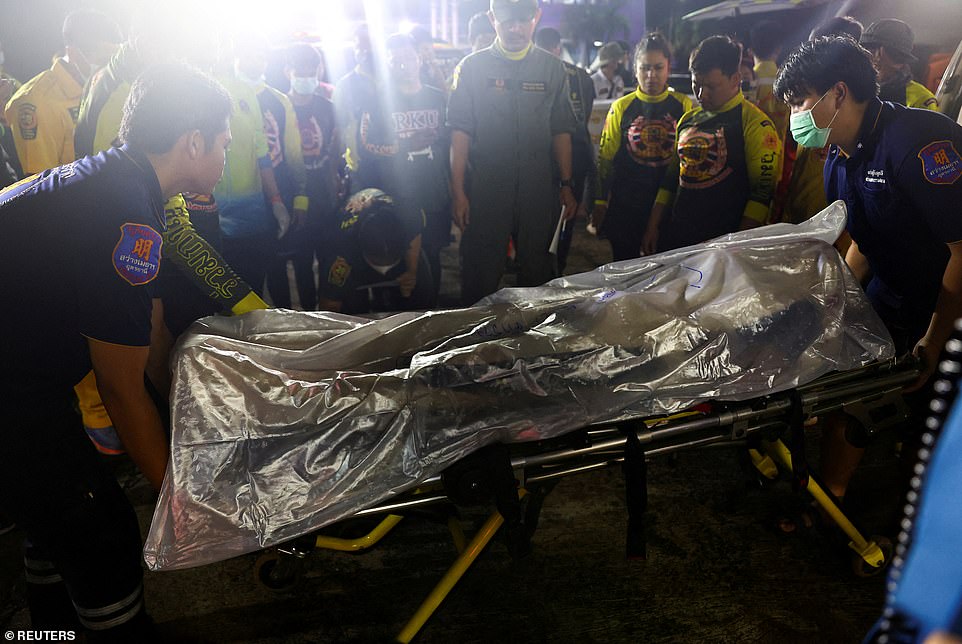 He continued the attack in nearby streets, shooting at bystanders and trying to run over panicked pedestrians as he fled in a white van which he torched at his home before killing his wife and his son and turning the gun on himself.

Dozens of blood-soaked bodies were scattered across the floor and grounds of the nursery and lined the roads and buildings outside in what is the deadliest mass killing in the country’s history.

In total, 37 people have been killed along with the shooter, including 24 children. 19 boys, three girls and two adults were found at the nursery. A further adult and young boy were killed outside the centre in a government office.

At the shooter’s house, one boy and four adults were found dead, and another adult at a nearby building was also killed. Five further adults were taken to hospital where they were pronounced dead, and 10 more are being treated for injuries.

Khamrab was fired from the force last year after failing a drugs test for methamphetamine, and he appeared in court Thursday prior to the shootings. He was known to be a frequent drug addict and was once caught with 100 pills in his possession, and officers believe he may have been on drugs when he attacked.

Police spokesperson Paisan Luesomboon told broadcaster ThaiPBS the gunman had been at a court hearing in connection with a drug case earlier on Thursday and had gone to the daycare centre to find his child, but the child was not there.

‘He was already stressed and when he couldn’t find his child he was more stressed and started shooting,’ Paisan said.

A huge manhunt was launched after the massacre at the nursery but police could only arrive at the shooter’s home to find his burned-out pickup truck and his family already dead inside. 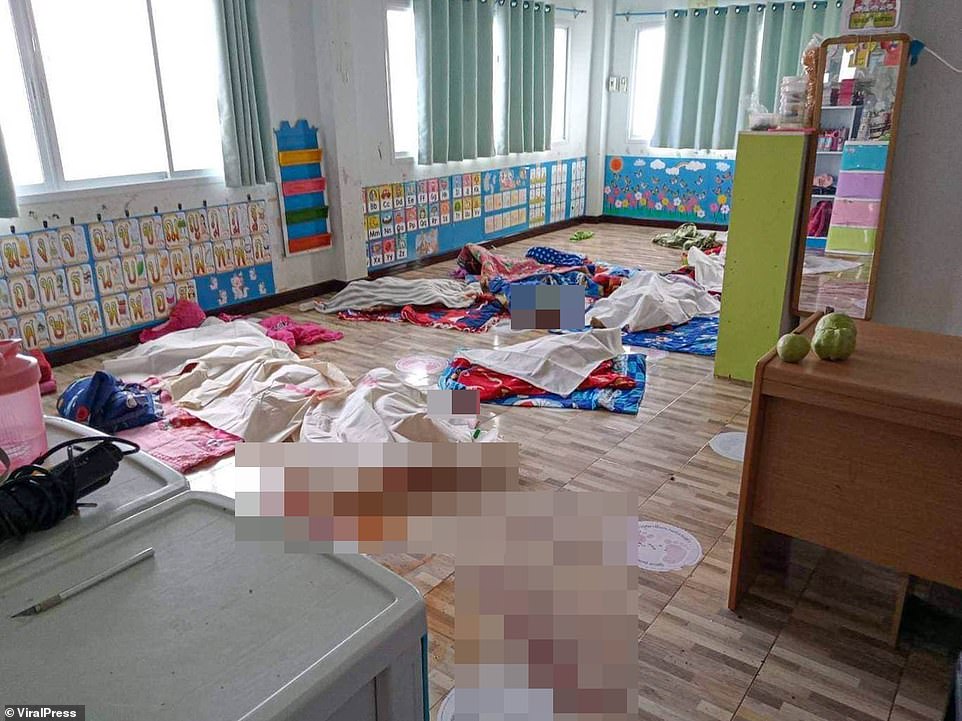 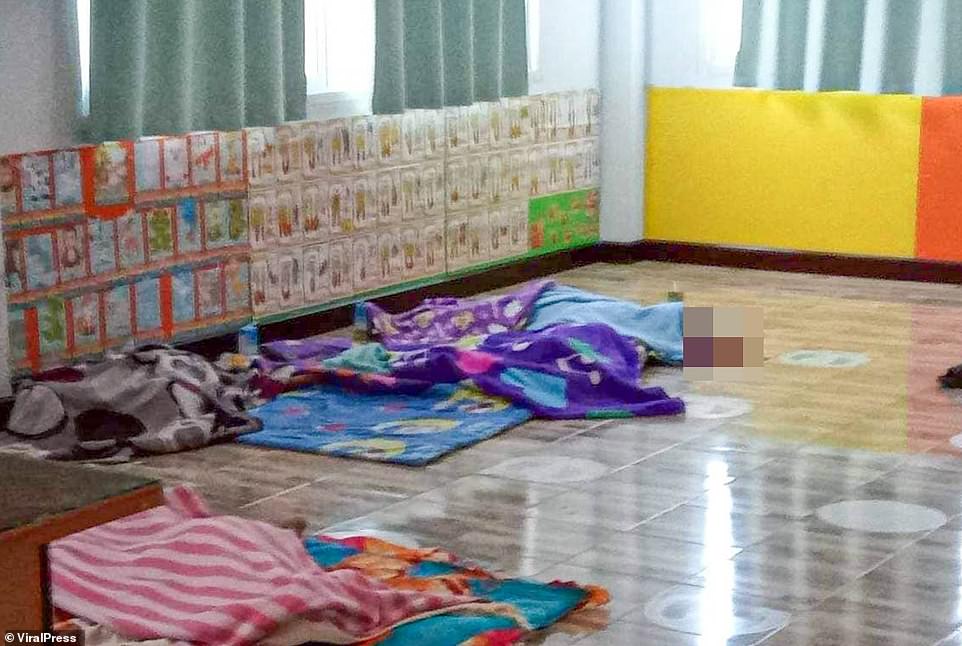 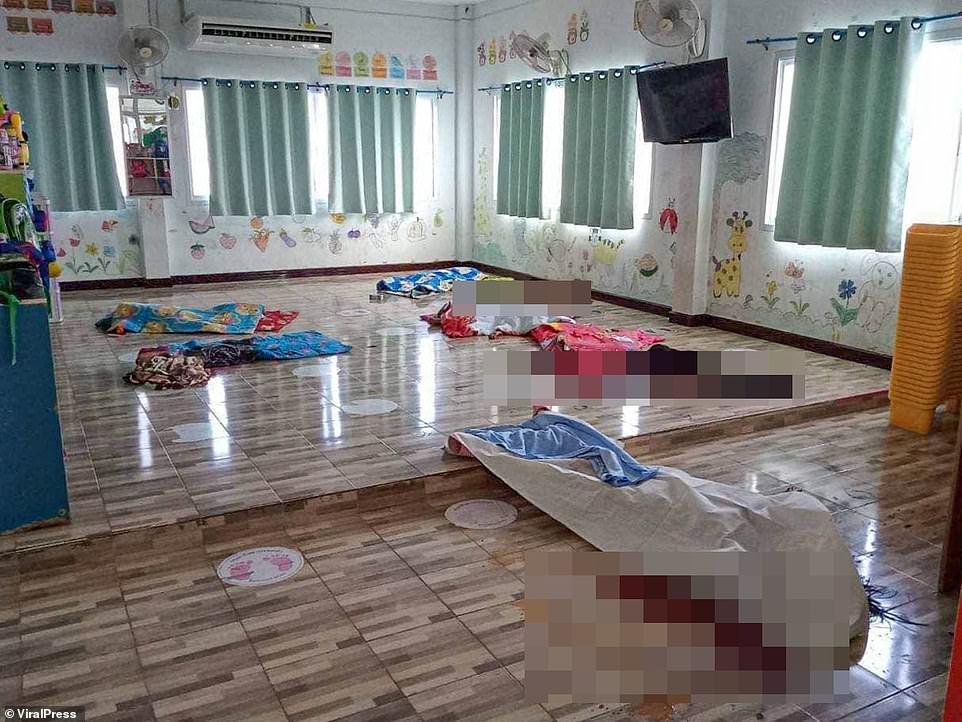 In total, 37 people have been killed. 24 bodies, including 19 boys, three girls and two adults were found at the nursery 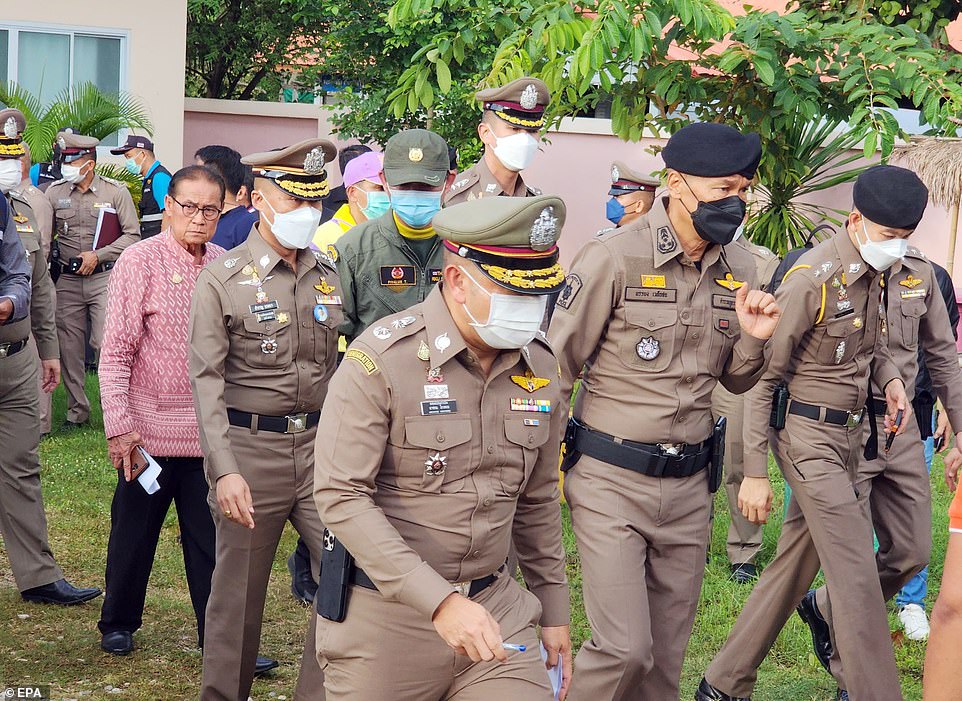 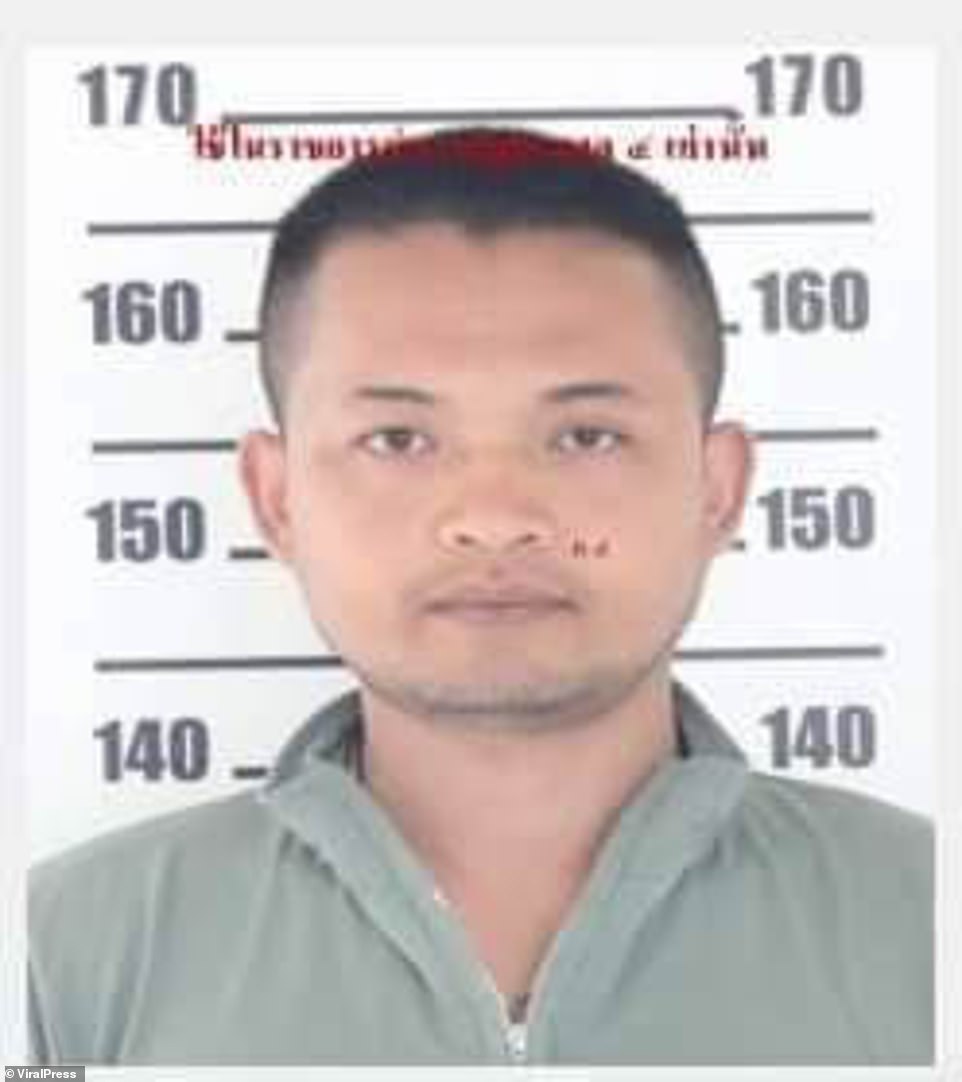 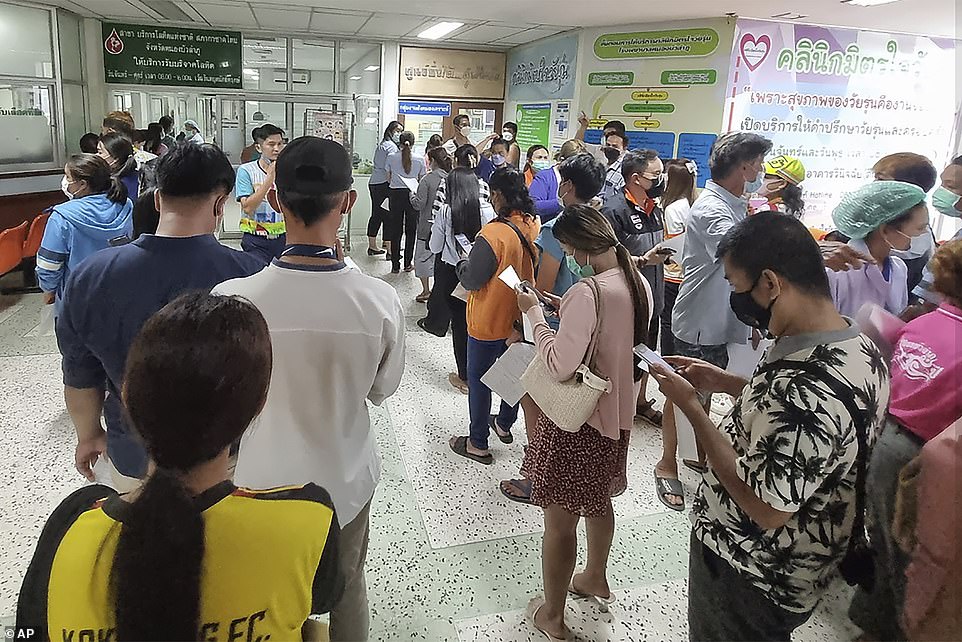 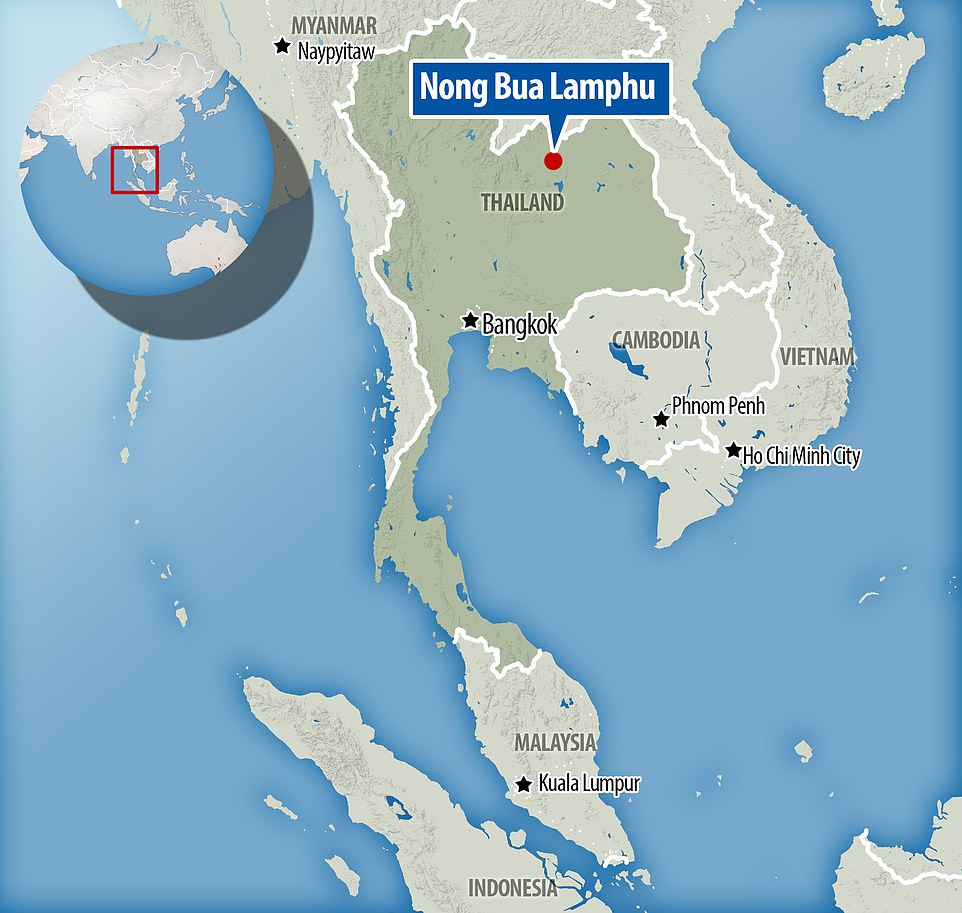 The massacre occurred in Nong Bua Lamphu, in the northeast of the Southeast Asian country

About 30 children were at the centre when the gunman arrived, fewer than usual, as heavy rain had kept many people away, district official Jidapa Boonsom, who was working in a nearby office at the time, told Reuters.

The man first shot four or five staff, including a teacher who was eight months pregnant, Jidapa said.

‘At first people thought it was fireworks,’ she added.

‘It’s really shocking. We were very scared and running to hide once we knew it was shooting. So many children got killed, I’ve never seen anything like it.’

The gunman escaped in a white four-door Vigo pickup truck and the bumper fell off as he fled.

A teacher who survived the massacre at a nursery in Thailand told how the killer pointed the gun at her head but she climbed over a wall to escape.

She said: ‘I knew it was a gun because I heard multiple gunshots, and then I saw him put in the bullets and point the gun at me.

‘I called the teacher, and the teacher was hugging the child. He kicked the mirror and I climbed the walls and asked for help.

‘He was inside the child centre for a long time. He used a knife and cut all the kids’ heads. He was carrying a small gun.

‘I didn’t know he was going to kill the kids. I thought he was gonna come out but he stayed inside a long time. He used a knife and stabbed all the kids.

‘He also stabbed a pregnant teacher. Only few months til she gives birth. He stabbed my staff. That’s all I know.

Eyewitness Paweena Purichan, 31, was riding her motorcycle to her shop when she encountered the fleeing Panya driving erratically.

‘He intended to crash into others on the road,’ she told AFP.

‘The attacker rammed a motorbike and two people were injured. I sped off to get away from him.’

‘There was blood everywhere.’

Paweena said the attacker was well known in the area as a drug addict.

Khamrab was dismissed from the police force in January after being arrested for possession of pills known as Ya Ba containing meth and caffeine, and he had been previously reprimanded for repeated drug use.

He joined the Royal Thai Police in May 2012 and was moved to Na Wang in 2019 where he worked until his dismissal.

Former colleagues say he had frequent mood swings and was often shunned at work.

According to The Nation Thailand, he once drew his pistol at a bank manager who had complained after finding the officer asleep in a police car parked outside the bank when he was meant to be on guard while banknotes were being stocked.

Last year, he also had heated arguments with his wife over his alleged affair with a karaoke worker whose ex-boyfriend was a drug dealer.

The officer also verbally and physically assaulted a neighbour who confronted him about his noisy house parties. 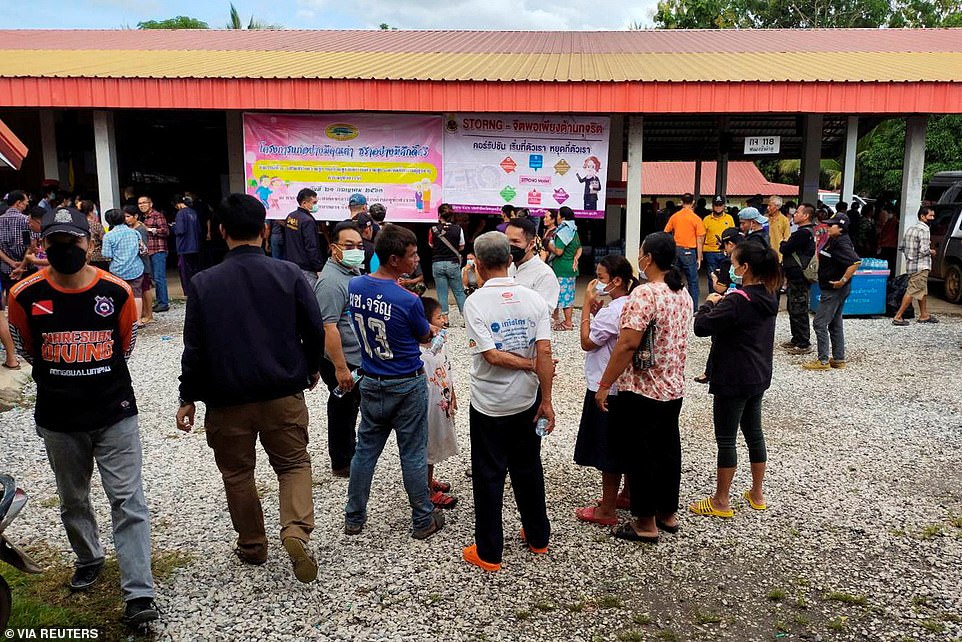 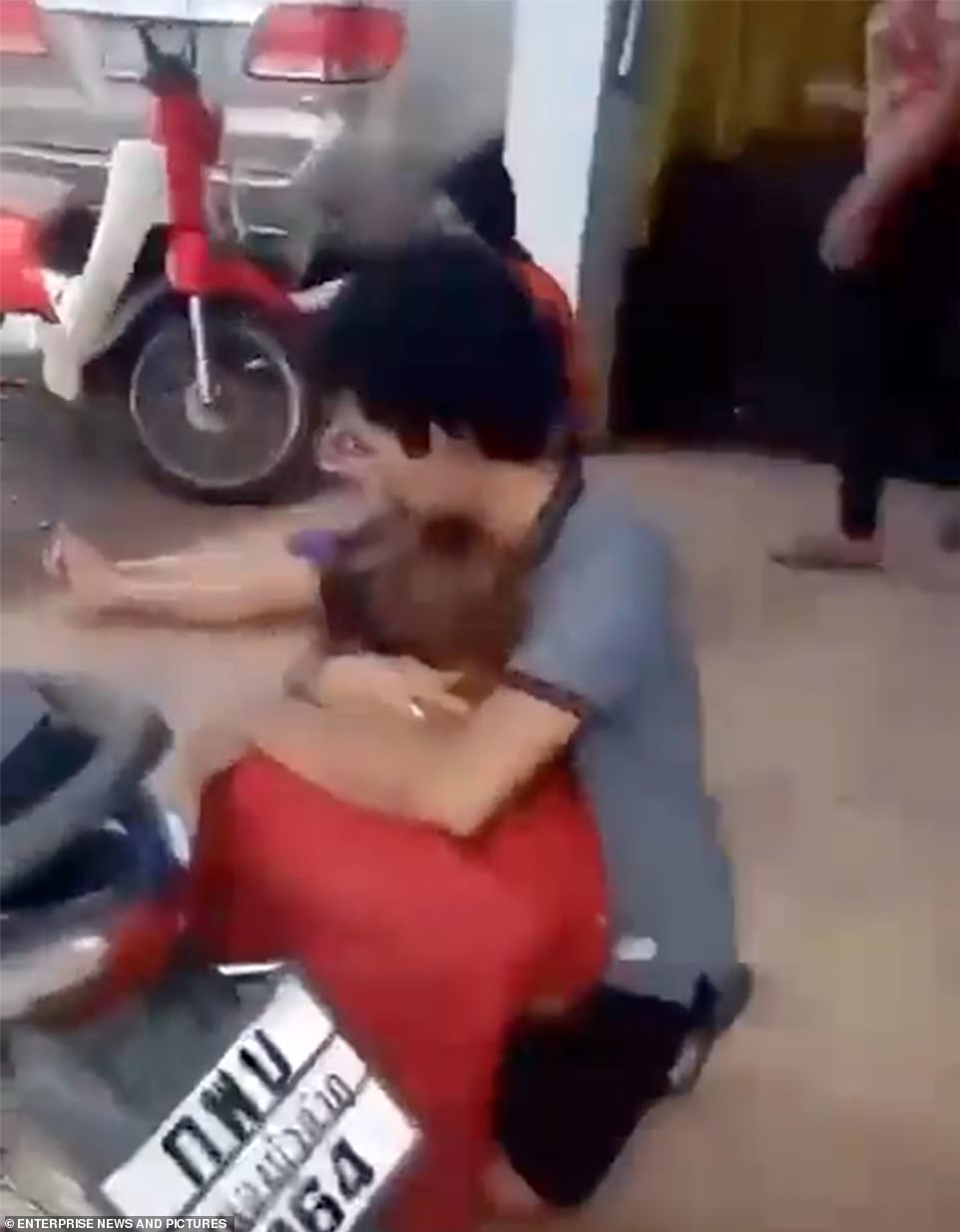 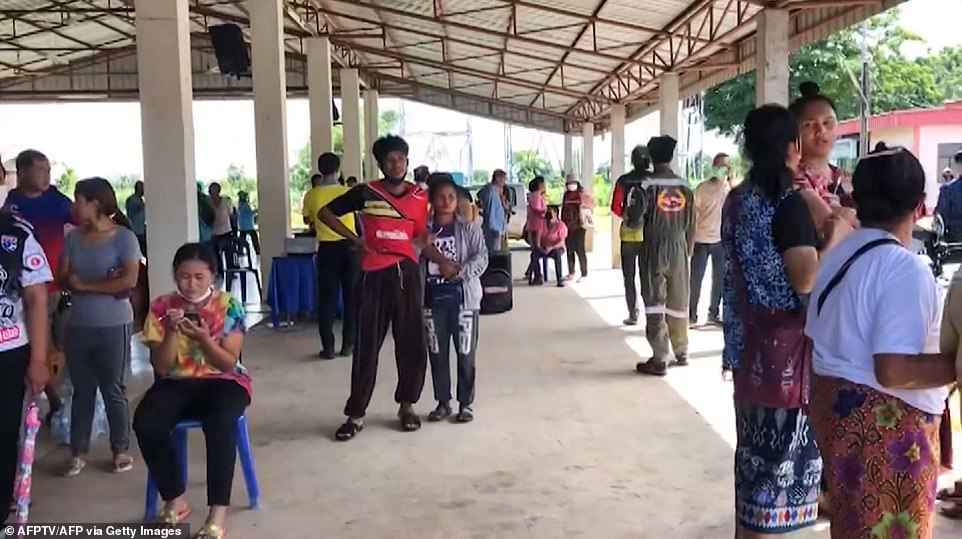 Thailand forms part of Southeast Asia’s so-called Golden Triangle which has long been an infamous hotspot for the trafficking and abuse of drugs.

Surging supplies of methamphetamine have sent street prices crashing in Thailand to all-time lows, according to the UN Office on Drugs and Crime.

The prime minister had alerted all agencies to take action and apprehend the culprit, a government spokesperson said, before they found his dead body.

PM Prayuth Chan-ocha said it was a shocking incident and sent condolences to the families of the victims.

He said: ‘Concerning this horrifying incident… I would like to express my deepest sorrow and condolences to the families of the dead and injured.’

Police Major General Achayon Kraithong said the shooting happened in the town of Nongbua Lamphu early in the afternoon. 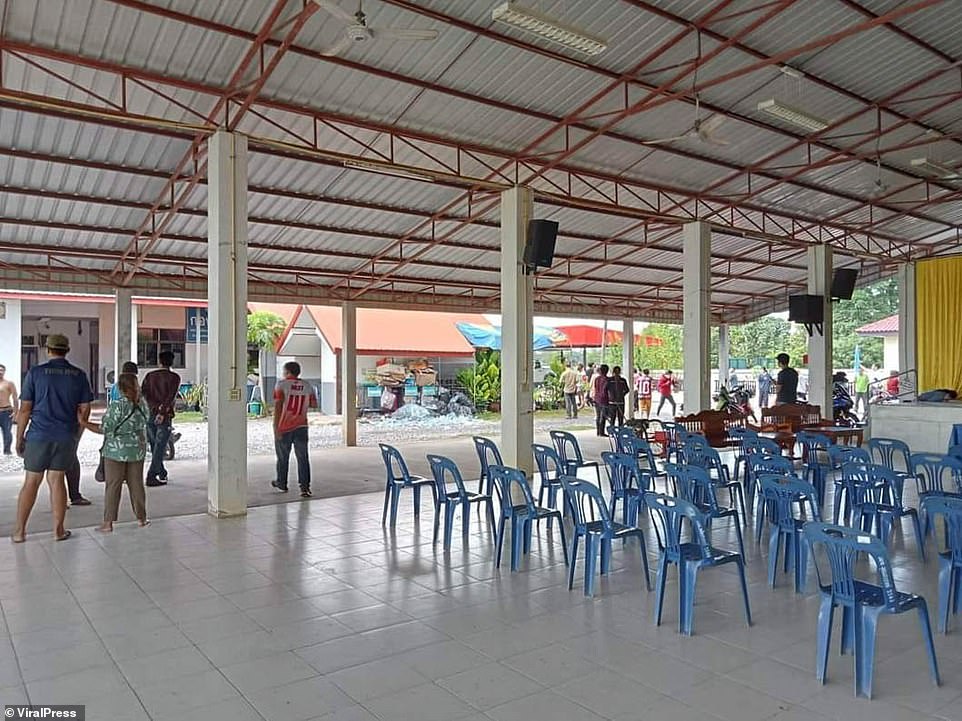 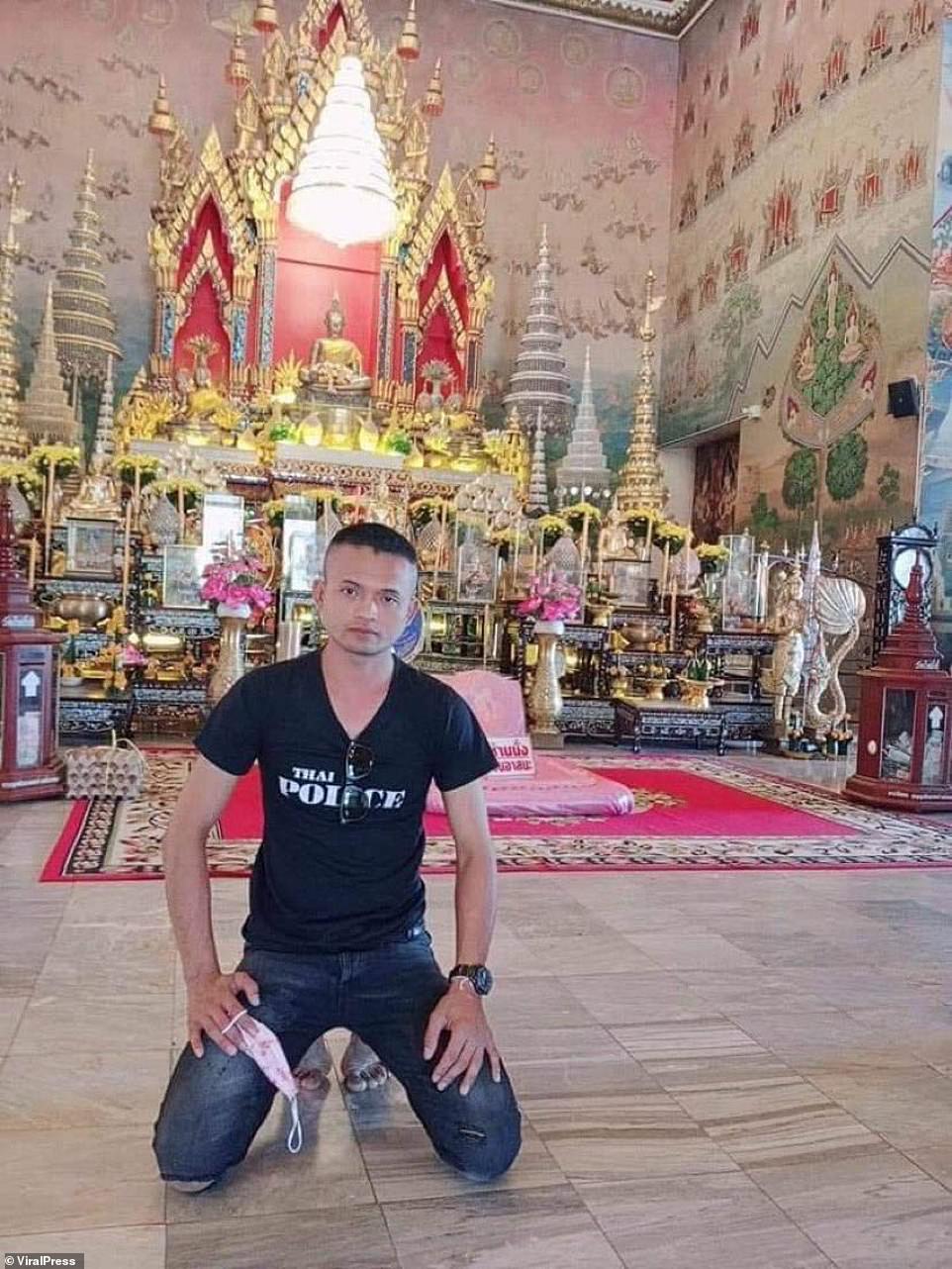 Khamrab was allegedly fired from the force after failing a drugs test, and was due in court tomorrow 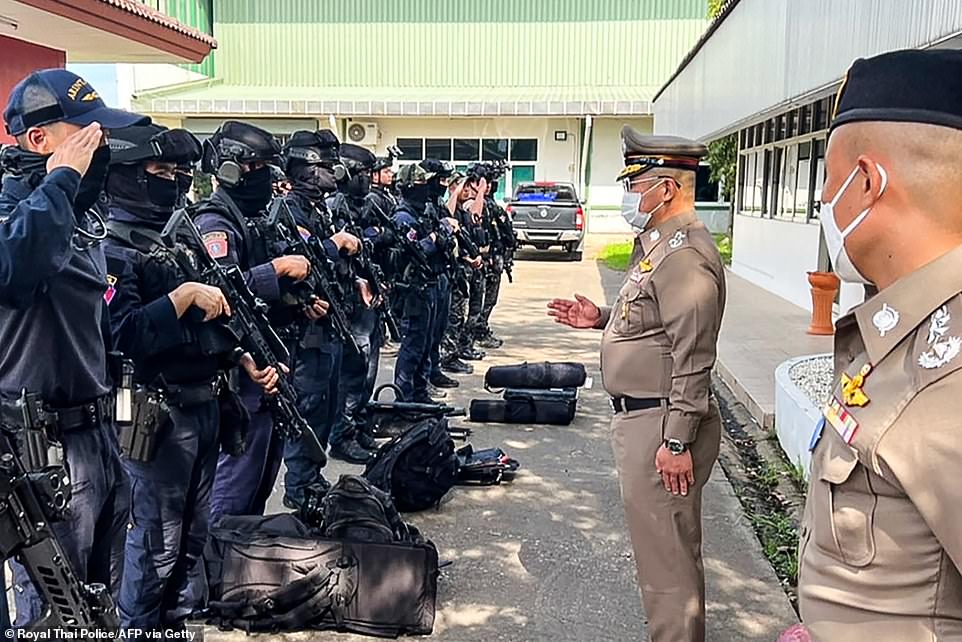 The mass killing comes less than a month after a serving army officer shot dead two colleagues at a military training base in the capital Bangkok.

While Thailand has high rates of gun ownership, mass shootings are extremely rare.

Official figures do not include huge numbers of illegal weapons, many of which have been brought in across porous borders over the years from strife-torn neighbours.

But in the past year, there have been at least two other cases of shooting murders by serving soldiers, according to the Bangkok Post.

In 2020, in one of the kingdom’s deadliest incidents in recent years, a soldier gunned down 29 people in a 17-hour rampage and wounded scores more before he was shot dead by commandos.

That mass shooting, linked to a debt dispute between gunman Sergeant-Major Jakrapanth Thomma and a senior officer, triggered public anger against the military.

The soldier was able to steal assault rifles from an army depot before embarking on his killing spree, posting live updates on social media as he did so.

Military top brass were at pains to portray the killer as a rogue soldier.