German schoolchildren are being told to bring warm clothes, gloves and blankets with them to lessons so the rooms can be ventilated to prevent coronavirus.

Guidelines issued to teachers say rooms must be properly ventilated by opening the windows and doors every 20 minutes, for up to five minutes at a time.

These measures will still apply during winter, despite temperatures in the central European country frequently dropping below freezing. 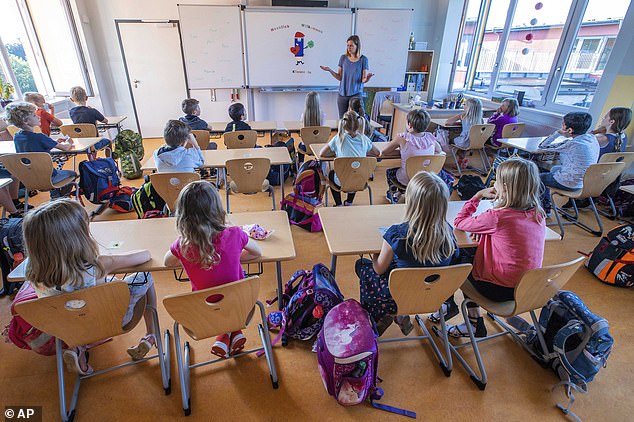 German schoolchildren have been told to bring blankets, sweaters and gloves to lessons with them this winter because classroom windows will be frequently opened to prevent Covid (file)

Most German school lessons last for 45 minutes, meaning that rooms cannot simply be ventilated between classes.

The 20-minute limit also means that every lesson throughout the day will be interrupted at least once.

Susanne Lin-Klitzing, who heads a German teaching union, told the Bild newspaper: ‘Correct ventilation is the be-all and end-all.

‘For the cold months, thick sweaters, scarves and blankets will be part of the basic equipment of the students.’

She added that classes will be impossible to teach while windows are open due to the disruption of putting warm clothes on, and noise from outside.

Instead, teachers are selecting pieces of music to play during the interruption before the lesson can resume.

Guidelines suggest that air purifiers could also be used for the task, without having to open the windows.

However, demand for the devices has led to a backlog of orders, meaning most schools do not now have time to install the purifiers before winter arrives.

The equipment can also be costly, meaning some schools have been left with no alternative but to open the classrooms up. 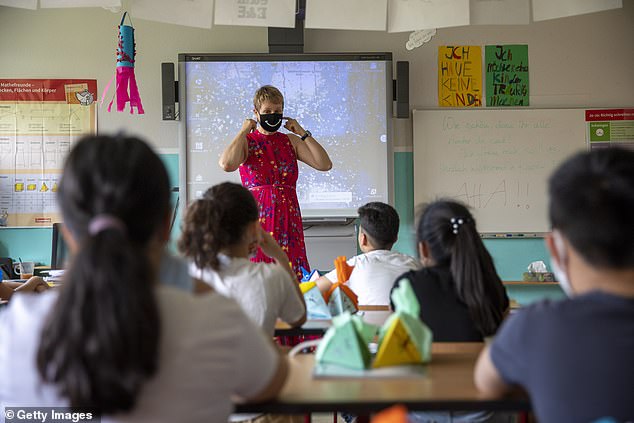 The advice is based on a growing body of evidence that coronavirus can linger in the air, meaning close contact is not always necessary to pick up the virus.

Experts also believe it will help prevent infections in classrooms where social distancing is not always possible.

However, it is not clear how experts decided on a 20-minute time limit.

Heinz-Peter Meidinger, head of the German Teachers’ Association, told Die Welt that the measures are essentially a ‘stab in the dark’.

‘Nobody knows for sure whether this will really bring the desired benefit,’ he added.

He advised that carbon dioxide detectors, which would tell teachers when air is becoming stagnant, would have been a better way to decide when windows needed to be open.

Some schools have started to order the devices, but backlogs again mean that most schools will not get them in time for winter.

Germany has been widely-praised for having one of the best virus responses in Europe, having reported 330,000 cases of the virus and 9,500 deaths.

However, cases have been rising since schools reopened, as major cities were hit with extra restrictions last week to try and curb the spread.

Angela Merkel’s office has warned that further country-wide curbs could be imminent to try and prevent hospitals reaching breaking point, as they did in many other European countries during the first wave.