London: Gatwick Airport's runway has tentatively reopened but police are still searching for the operator of two drones which have caused chaos at Britain's second-busiest airport, leaving more than 100,000 passengers stranded after hundreds of flights were cancelled. 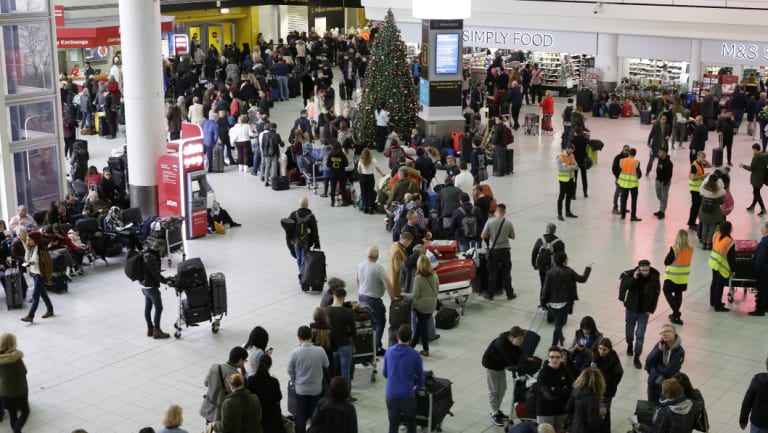 People queue at Gatwick airport, near London on Thursday.Credit:AP

Some 765 flights were scheduled for departure and arrival on Friday, local time, 35 hours after the first drone sighting caused the airport to halt flights, five days from Christmas.

Late on Thursday, the military was sent in. While they have not located the drones or their operators, the aiport's spokesman said authorities had given them the "confidence" to begin operating again.

"Overnight we have been able to work with partners, including government agencies and the military to put measures in place which have provided the confidence we needed to re-open the runway and ensure the safety of passengers, which remains our priority," a spokesman said.

"Our priority today is to get our operation back on track so that people can be where they need to be for Christmas," the spokesman said.

Travellers are being advised to check ahead given only a limited number of flights are operating.

Transport Secretary Chris Grayling did not rule out the possibility that the drones were operated by hostile state actors but said it was unlikely.

He defended the British government's response.

"This is an unprecedented event, there's not been like this anywhere in the world,"

"It's also something for which there aren't simple solutions. A few people have said 'can't you just shoot down the drones?' There is an experience recently elsewhere in the world of literally thousands of machine gun bullets being used to try and bring down a drone – failing to do so.

"And of course you can't just fire weapons haphazardly in what is a built up area round the airport because there are consequences if that goes wrong," he said.

"There isn't a single off-the-shelf commercial solution that does the job," he said.

He conceded airports would have to prepare better to deal with hostile drone attacks in future.