A man who turned a wheelbarrow into a mode of transport during lockdown has set a speed record of 44,632mph for the world’s fastest recorded time on a wheelbarrow.

Kevin Nicks, from Oxfordshire, set himself a challenge to motorise a wheelbarrow on zero budget while he was in lockdown in Chipping Norton.

He wanted to wait for things to get better with the pandemic before contacting Guinness World Records about setting the record. 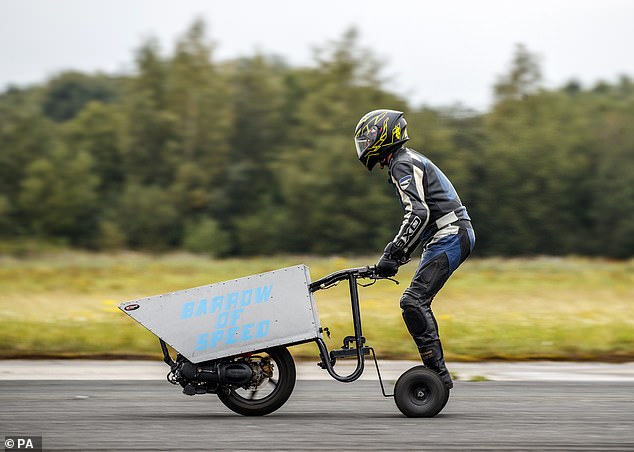 Kevin Nicks set the record for the world’s fastest wheelbarrow at a Straightliners event at Elvington Airfield, North Yorkshire

After lockdown he set the world’s speed record on the ‘Barrow of Speed’ at a Straightliners event at Elvington Airfield, North Yorkshire.

The project started as a way to show what was possible with limited materials, a positive attitude and some creativity.

The 57-year-old gardener previously said: ‘I set myself a challenge to build a machine on zero budget because for some people money is tight,’ he said.

‘Somebody donated a moped which wasn’t running and I got that running. Everything else was just scraps and bits and pieces I had around.

‘Now I have built this amazing machine which has actually turned out far better than I thought – it is such fun.’

This is not the first time Kevin has gotten creative with making unusual things motorised.

In 2015 he built the world’s fastest shed  and three years later it reached 101.5 mph at Pendine Sands in Wales.