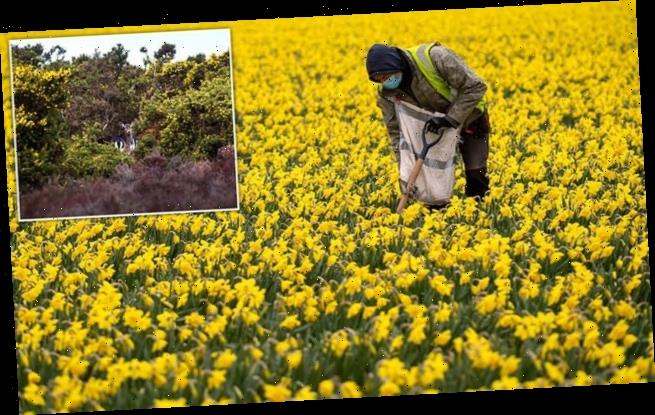 Gales topping 50mph are set to hit Britain later today after temperatures dropped as low as -5C due to an Icelandic blast that has moved in ahead of a mini heatwave predicted to arrive next week.

A cloudy start across Britain has made way for sunshine in the South, but rain has been forecast for parts of Scotland and north-western England later today.

By this afternoon the Met Office has suggested gusts of up to 52mph could batter north western parts of Scotland from around 3pm.

It comes after temperatures soared to 59F (15C) in St James’ Park, London, on Monday, while St Athan in Wales saw nearly 11 hours of daylight, in yet another sign that southern Britain has seen the back of winter.

In another boost, Britain could bask in a mini-heatwave, with temperatures moving toward 68F (20C) next week, in time for the Stay at Home order to be dropped and the Rule of Six guidance to return.

For Scotland, however, there are still freezing temperatures to contend with, as temperatures dropped to -5C in the Highlands village of Aboyne overnight. 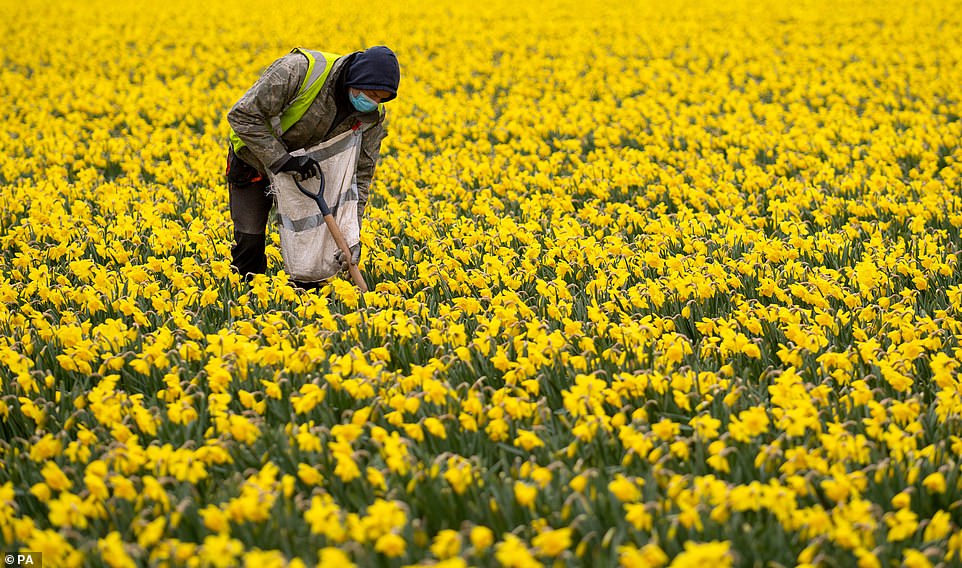 As Britain enjoys its first week of spring weather, parts of the north west and Scotland are preparing for gales reaching speeds of more than 50mph, Lincolnshire (pictured), is expected to remain dry but cloudy 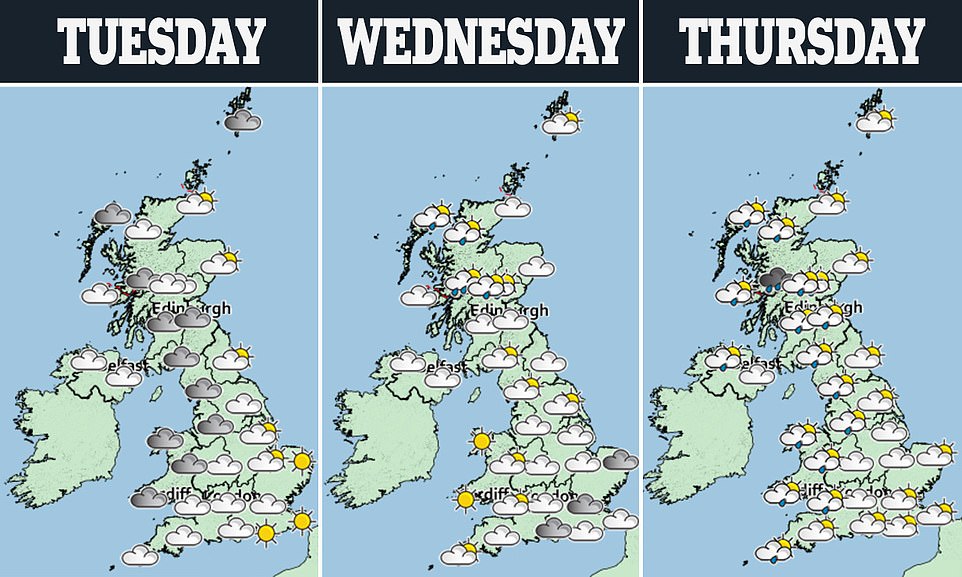 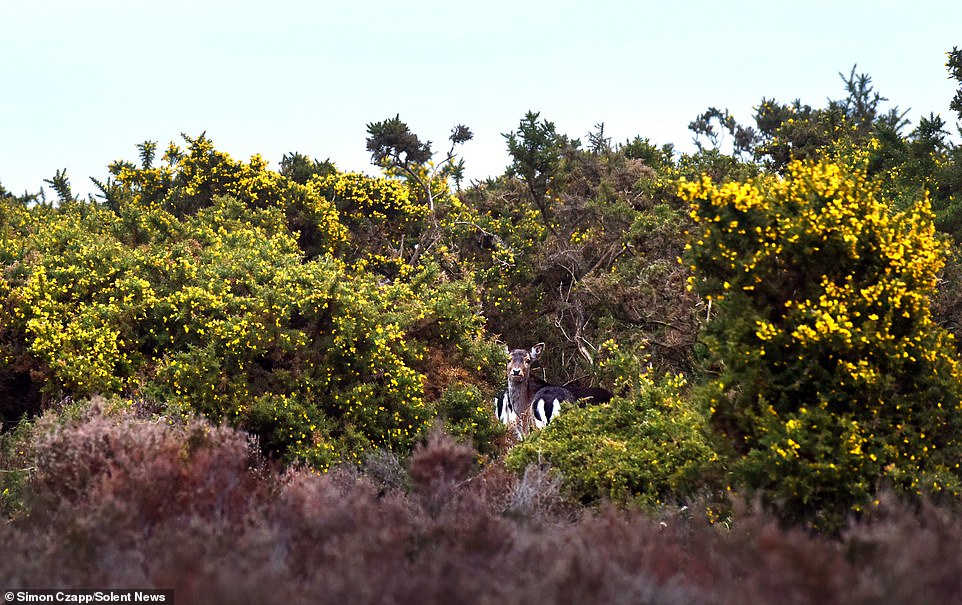 A deer was spotted in the blossoming trees of the New Forest earlier this morning, after temperatures reached highs of 59F on Monday 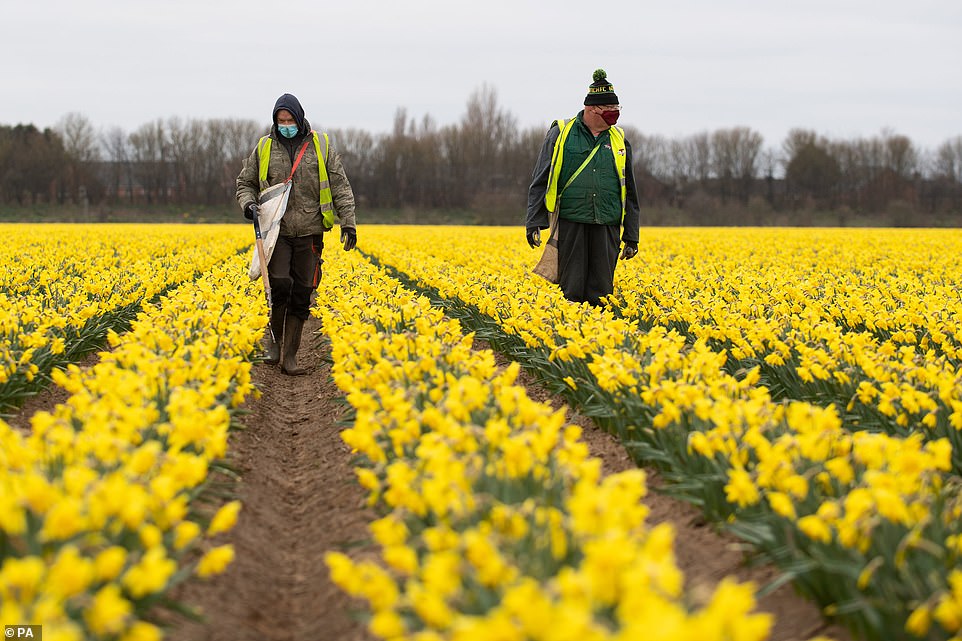 Following rain later this week, the Met Office has warned of a ‘wintry’ cold snap on Friday, that should ease by the weekend. Temperatures are not expected to hit freezing.

A Met Office forecast states: ‘After a brief cold interlude on Friday, temperatures will recover on Saturday with further showers, wintry over high ground during the morning, and strong winds in northwestern areas. Elsewhere across the U.K most areas becoming largely dry but often cloudy.

With temperatures expected to climb next week, forecaster Simon Partridge told The Sun: ‘As the country takes its next step on the roadmap we’re in for some long-overdue sunshine. 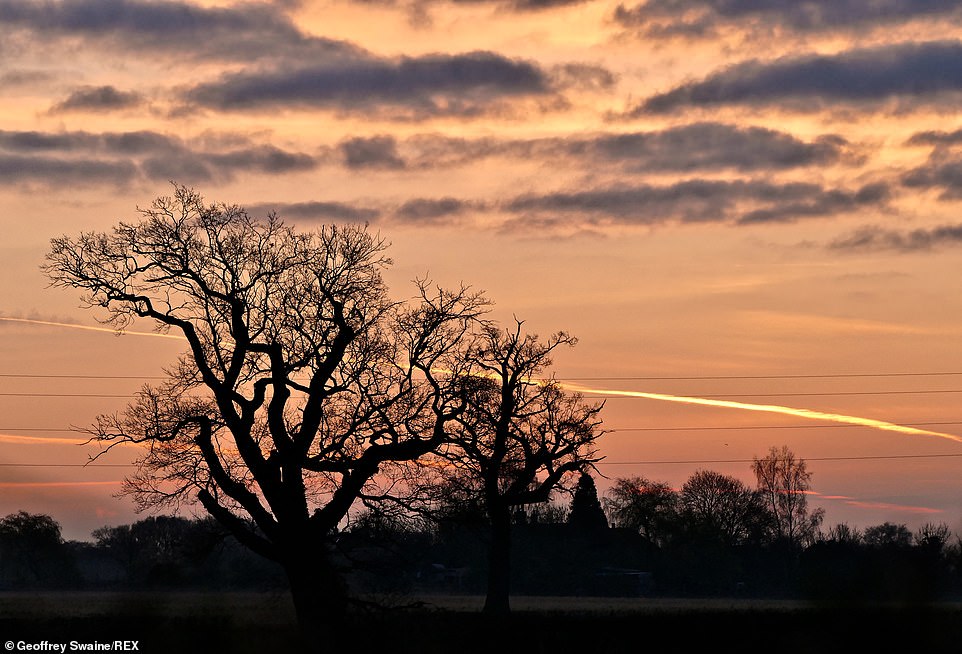 Following rain over northern parts of Britain later this week, the Met Office has warned of a ‘wintry’ cold snap on Friday, that should ease by the weekend. Temperatures are not expected to hit freezing. Clouds remained over Dunsden in Oxfordshire at sunrise this morning 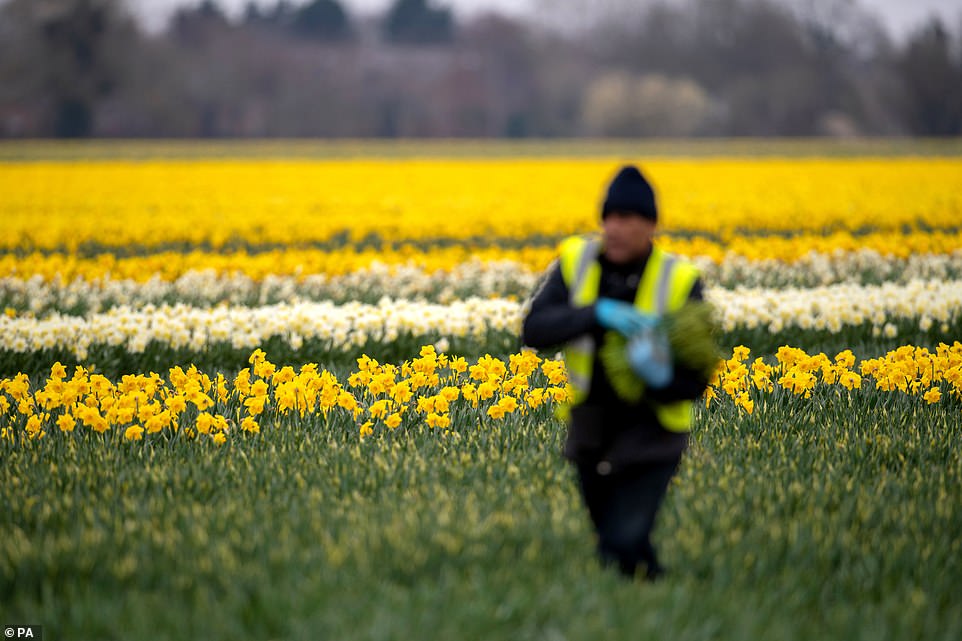 A blast of Icelandic air has moved in over northern and western parts of England, seeing temperatures drop as low as -5C overnight, but Holbeach’s daffodil farm was safe was from the freezing cold 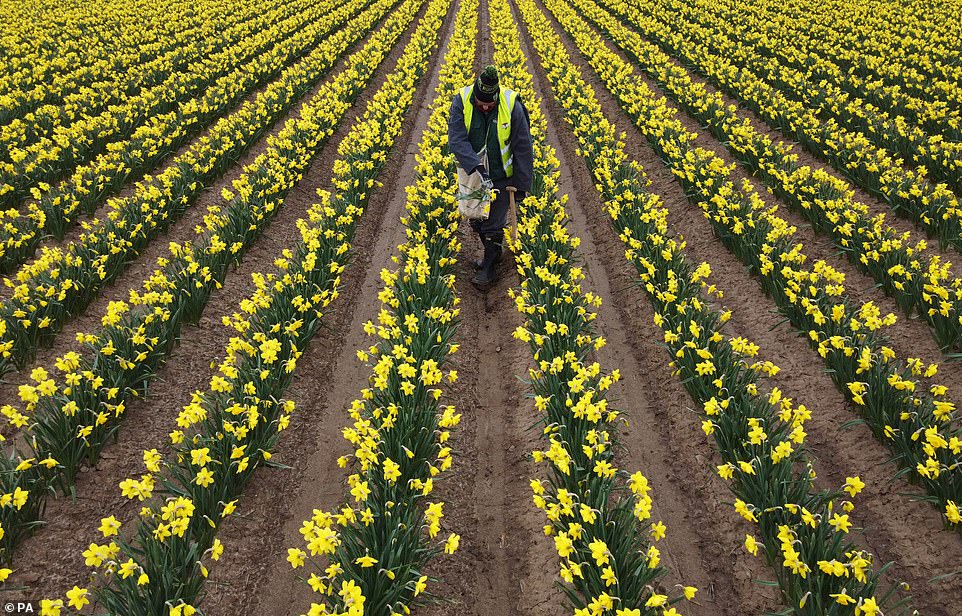 Next week temperatures could climb as high as 68F (20C) as Britain enjoys a mini heatwave, bringing a splash of sunshine over daffodils growing in Lincolnshire 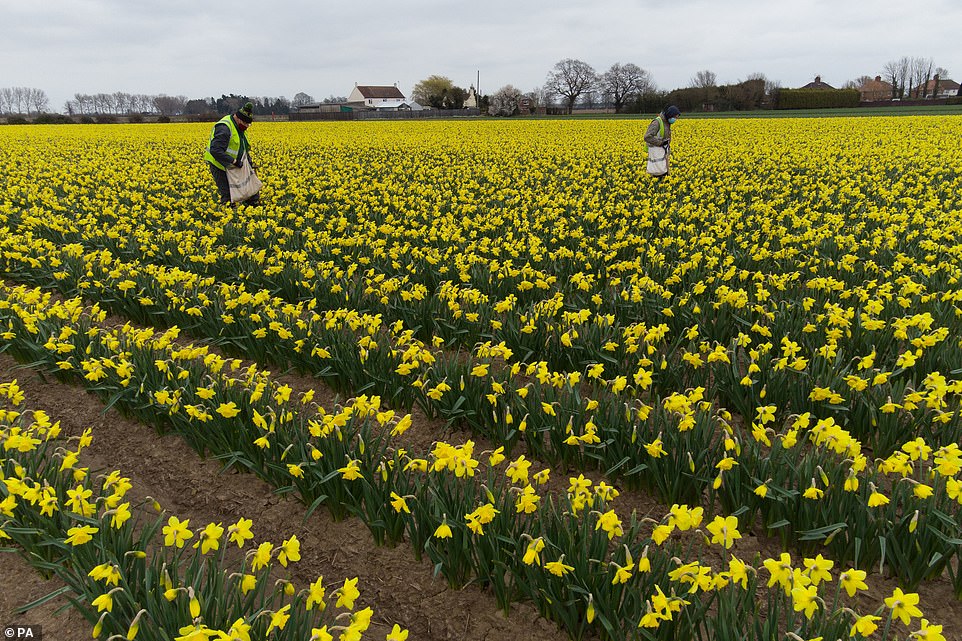 Heavy showers could move in by Friday, when the Met Office is also expecting a brief cold snap, before temperatures climb once again next week.

‘People will be able to meet up with other households in back gardens and, dare I say it, enjoy a barbecue.’

‘Temperatures will be above average for this time of year and that means people will be able to enjoy time outdoors.’

Tonight is expected to be a largely dry evening with late spells of sunshine however it will be overcast and cloudy across northern and western areas with outbreaks of rain.

Overnight, rain will track south-eastwards across the country but will turn increasingly light and patchy to reach parts of Wales and England by dawn.

Tomorrow will see cloudy skies and drizzle over England and Wales, moving south-east throughout the day. 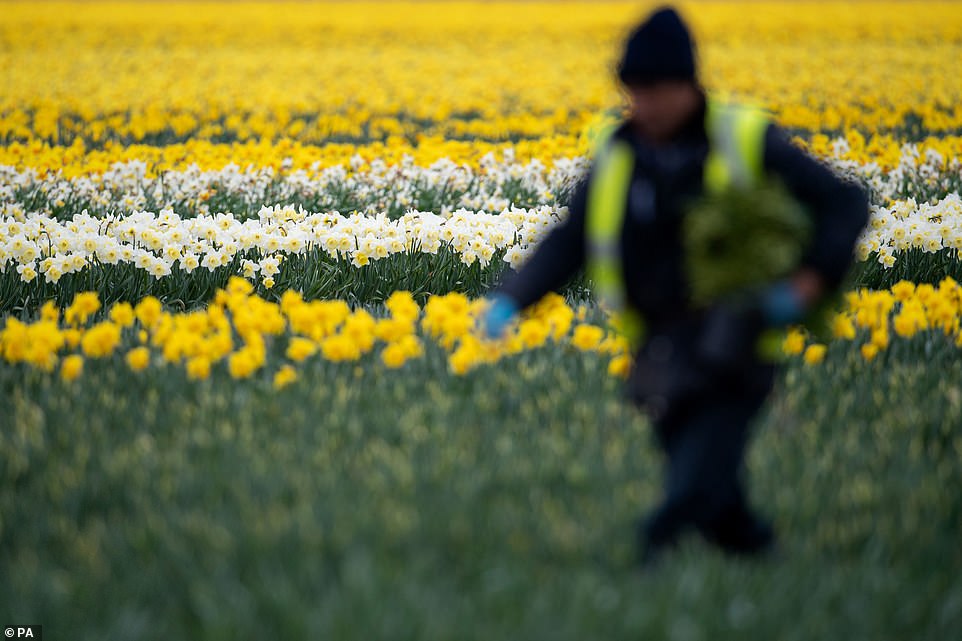 The return of spring has put pickers to work at Holbeach in Lincolnshire, where around 2.5million daffodil flowers are harvested each year 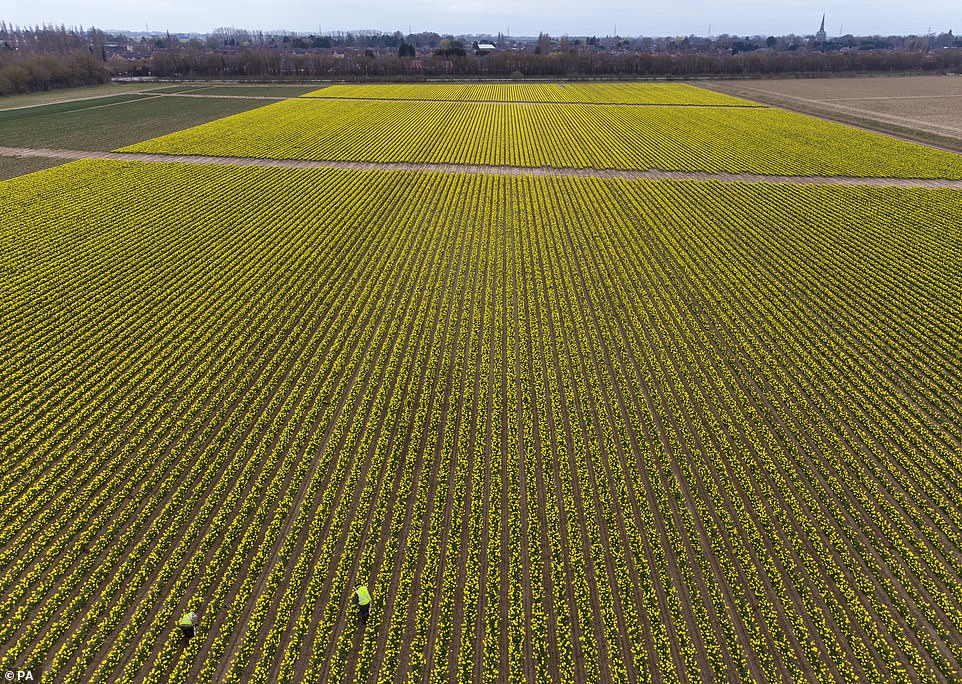 Millions of daffodils are waiting to be picked at Taylors Bulbs, but the family firm is depending on just 30 workers this year, compared with its usual team of around 150 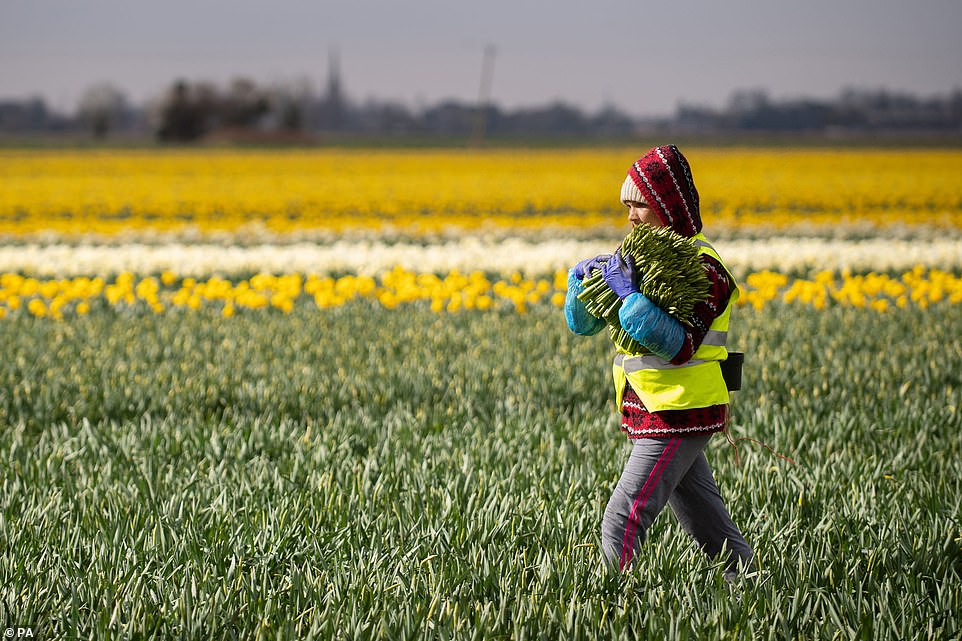 Last Thursday, Britain recorded its warmest day of the year so far, with Edinburgh reaching 66.2F (19C). Temperatures could go even higher next week, just in time for the end of the Government’s stay at home message 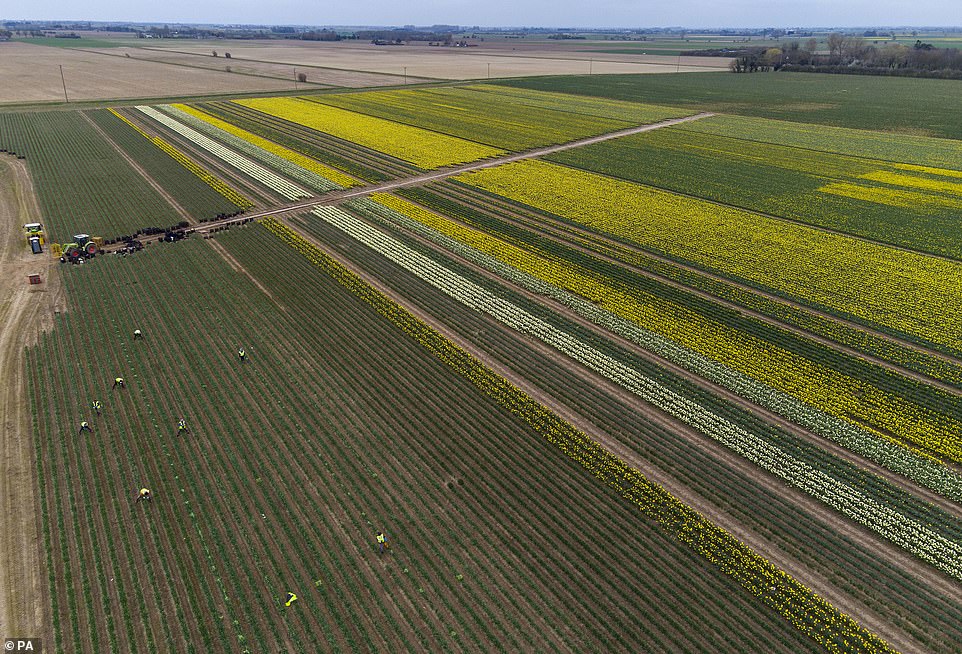 ‘People will be able to meet up with other households in back gardens and, dare I say it, enjoy a barbecue,’ said forecaster Simon Partridge

The Met Office expects weather to turn ‘increasingly dry with sunny spells from the north-west,’ but rain has been forecast for Scotland and Northern Ireland.

Heavy showers could move in by Friday, when the Met Office is also expecting a brief cold snap, before temperatures climb once again next week.

The return of spring has put workers back in fields to harvest flowers, including daffodils in Lincolnshire, where the impact of Covid-19 restrictions and Brexit has seen its usual workforce of around 150 people cut to just 30