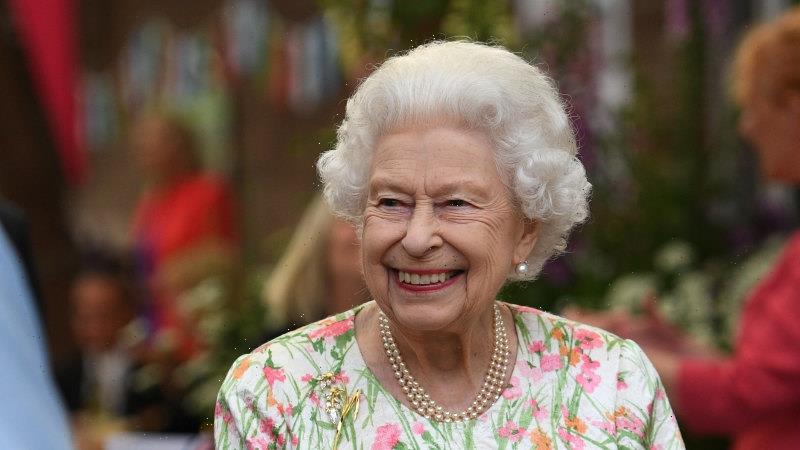 Carbis Bay: Prince Charles has urged world leaders to tackle climate change with the same “scale and sheer speed” with which governments have responded to the coronavirus pandemic, as the royal family launched a soft diplomacy offensive at the G7 summit in Britain.

The Queen, who told a community audience that she had not met with world leaders since the pandemic began, embraced her return to the world stage with vigour.

Accompagnied by daughter-in-law Camilla, Duchess of Cornwall, and Prince William’s wife Kate, Duchess of Cambridge, the monarch, now vaccinated and maskless, joked with world leaders, chatted happily with locals and openly performed for the cameras at a cake-cutting ceremony. 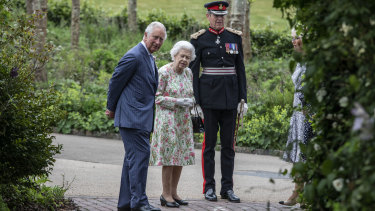 Prince Charles, pictured with Queen Elizabeth II at a reception for Her Majesty at the G7 summit, called on world leaders to respond to climate change with urgency. Credit:Getty

Her charm offensive was launched as the heir to the throne made his plea to Prime Minister Boris Johnson, US President Joe Biden and the leaders of Canada, France, Germany, Italy and Japan on the eve of talks between the group over new emissions reductions policies.

“The global health emergency has shown us what a truly borderless crisis looks like,” the Prince of Wales said.

“Of course, we did not fully see COVID-19 coming. Yet climate change and biodiversity loss represent a borderless crisis, the solutions to which have been argued about and postponed for far too long.

“The fight against this terrible pandemic provides, if ever one was needed, a crystal-clear example of the scale, and sheer speed, at which the global community can tackle crises when we combine political will with business ingenuity and public mobilisation.

“We are doing it for the pandemic. So if you don’t mind me saying so, we must also do it for the planet.”

The three generations of royals proved the headline act for the opening day of the G7 summit on Friday. 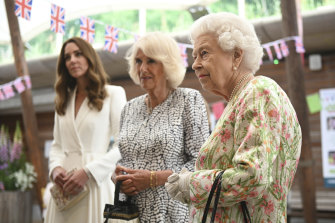 The royal family is one of Britain’s best soft power assets and are usually asked to help out when the country hosts gatherings which attract international coverage.

The 95-year-old Queen met Biden for the first time and posed for a ‘family photo’ at the Eden Project, a huge indoor rainforest near the G7 conference site in Carbis Bay.

As cameras were flashing, the monarch joked: “Are you supposed to be looking as if you’re enjoying yourself?” 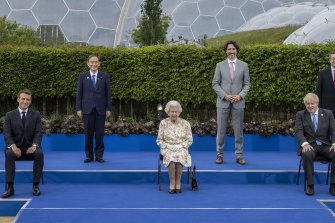 Sitting at the centre of the “family photo” of G7 world leaders, the Queen joked: “Are you supposed to look like you’re enjoying yourself?” Credit:Getty

Johnson, who is hosting the summit in Cornwall, added: “We have been enjoying ourselves – in spite of appearances.”

The summit got off to a rocky start after thick fog forced the planes of several world leaders to be diverted to Oxford, a five-hour drive away. 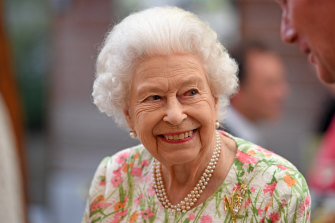 The Queen told guests at a community lunch that she had not met with world leaders for two years and she looked forward to G7. Credit:Getty

German Chancellor Angela Merkel walked over to the Queen after the pictures were taken and said quietly: “Thank you for doing that for us.”

Prime Minister Scott Morrison, who has been invited to the G7 as a guest, was not at the event because it was only for permanent G7 members.

He will have a private audience with the Queen at Windsor Castle early next week, as will the newly elected Biden.

As the host of the Eden Project’s ‘Big Lunch’, an annual neighbourhood celebration, the Queen insisted on using a ceremonial sword to cut the cake.

When told she could have a standard cake knife, the Queen turned it down saying: “this is more unusual”, before wielding the blade with practiced aplomb through the icing, to applause from the crowd.

Peter Stewart, executive director of the Eden Project, said the Queen had told the guests that she looked forward to taking part in a face-to-face summit after so long isolating at Windsor Castle during the pandemic.

“She was talking about the fact she usually meets world leaders and she hasn’t met them for two years and she brought that back to the importance of everyday life and getting to know our neighbours,” Stewart said.

While the Bidens are due to be hosted by the Queen on Sunday (Monday AEST), First Lady Jill Biden, a teacher, visited a school with Catherine on Friday (Saturday AEST).

Asked about the birth of Prince Harry and Meghan, the Duchess of Sussex’s new baby girl Lilibet last week, Catherine said: “I wish her all the very best, I can’t wait to meet her because we haven’t yet met her yet so hopefully that will be soon.”