A NEW billboard portraying the president in an orange prison jumpsuit behind bars has cropped up, sparking fury among Trump supporters.

Appearing in downtown Phoenix, the billboard features the president wearing a name tag bearing the words "Don the Con." 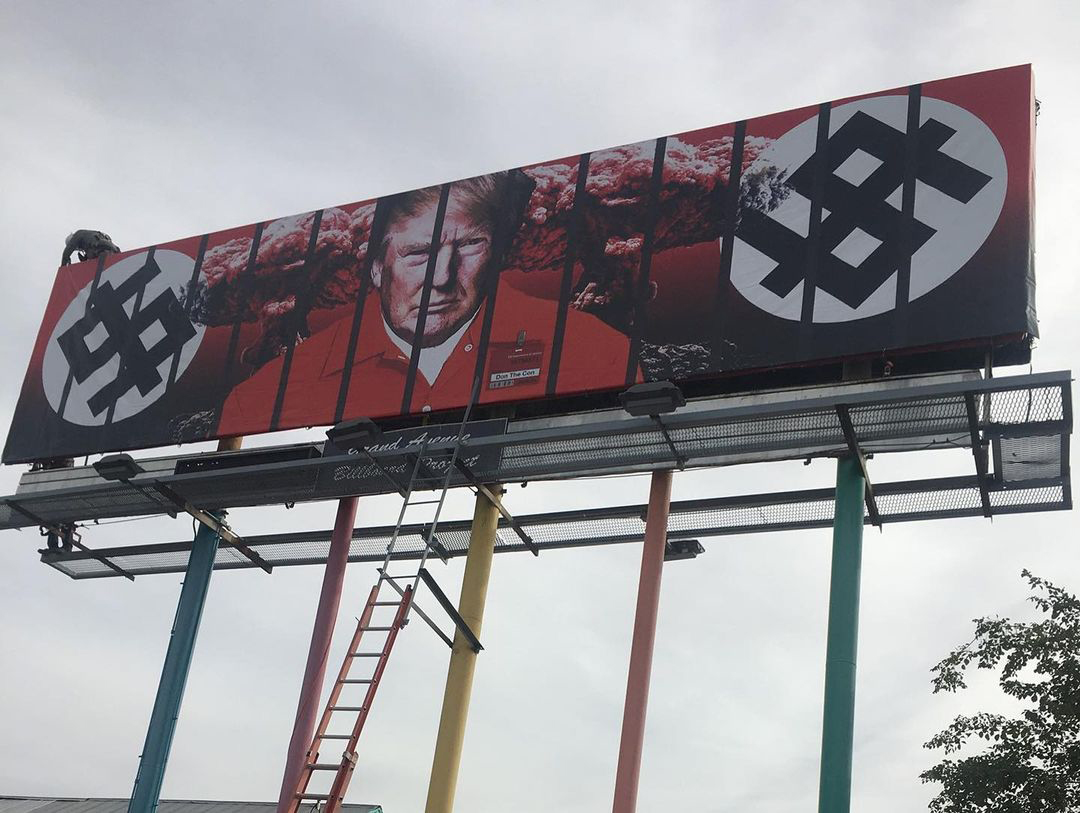 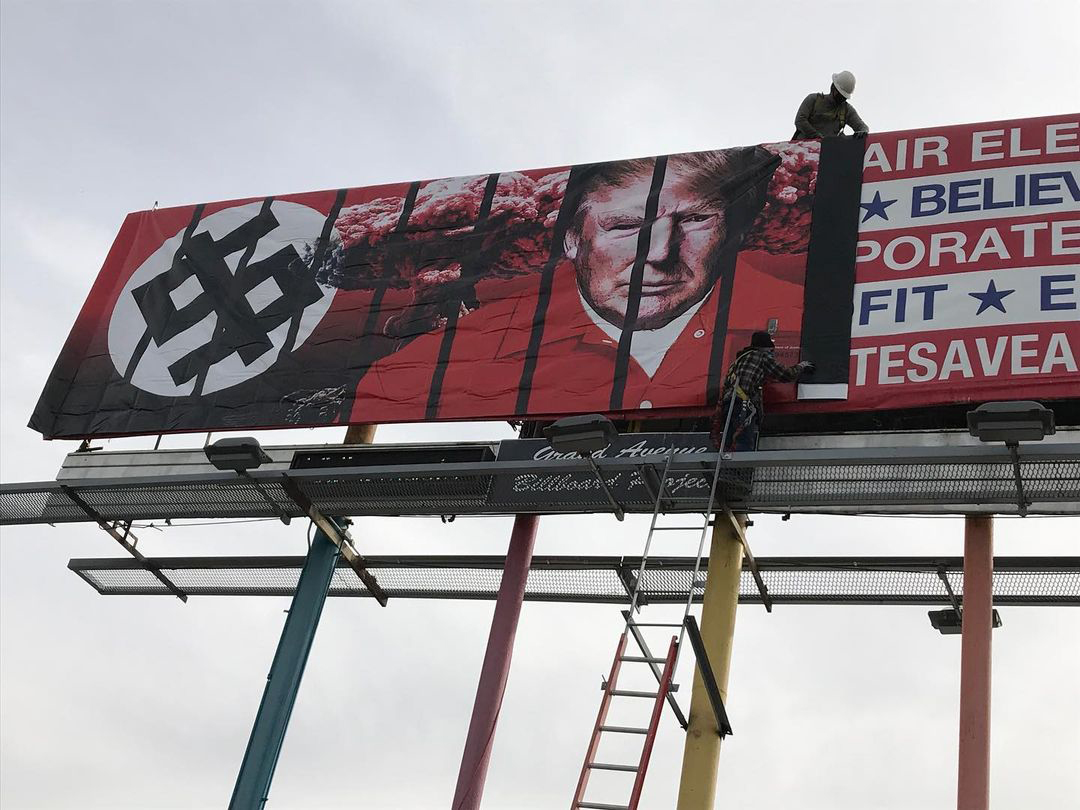 Behind the president, two exploding nuclear-looking bombs are seen in the background with dollar signs bearing resemblance to the Nazi swastika.

Immediately beneath the billboard lies a digital counter that reads "TRUMP DEATH CLOCK", displaying the increasing number of COVID-19 deaths in the US.

“The first design reflected my fears of a Trump administration,” Fiorito explained in an interview with Phoenix New Times. “This one is my hope of what will happen afterwards; it’s pretty aspirational.”

The billboard is part of the Grand Avenue Billboard Project, which is headed by Beatrice Moore, an artist and historic preservation advocate who owns the billboard space as well as several properties on Grand Avenue.

It replaces a similar design, named by the artist as the Trumpocalypse and installed in March 2017, which depicted Trump in a regular business suit flanked by the same nuclear mushroom clouds and dollar signs resembling swastikas.

New additions now include prison bars, a prison jumpsuit and an inmate badge.

The previous artwork was even adjusted by locals who added a red half-dome resembling a clown nose to Trump’s face. 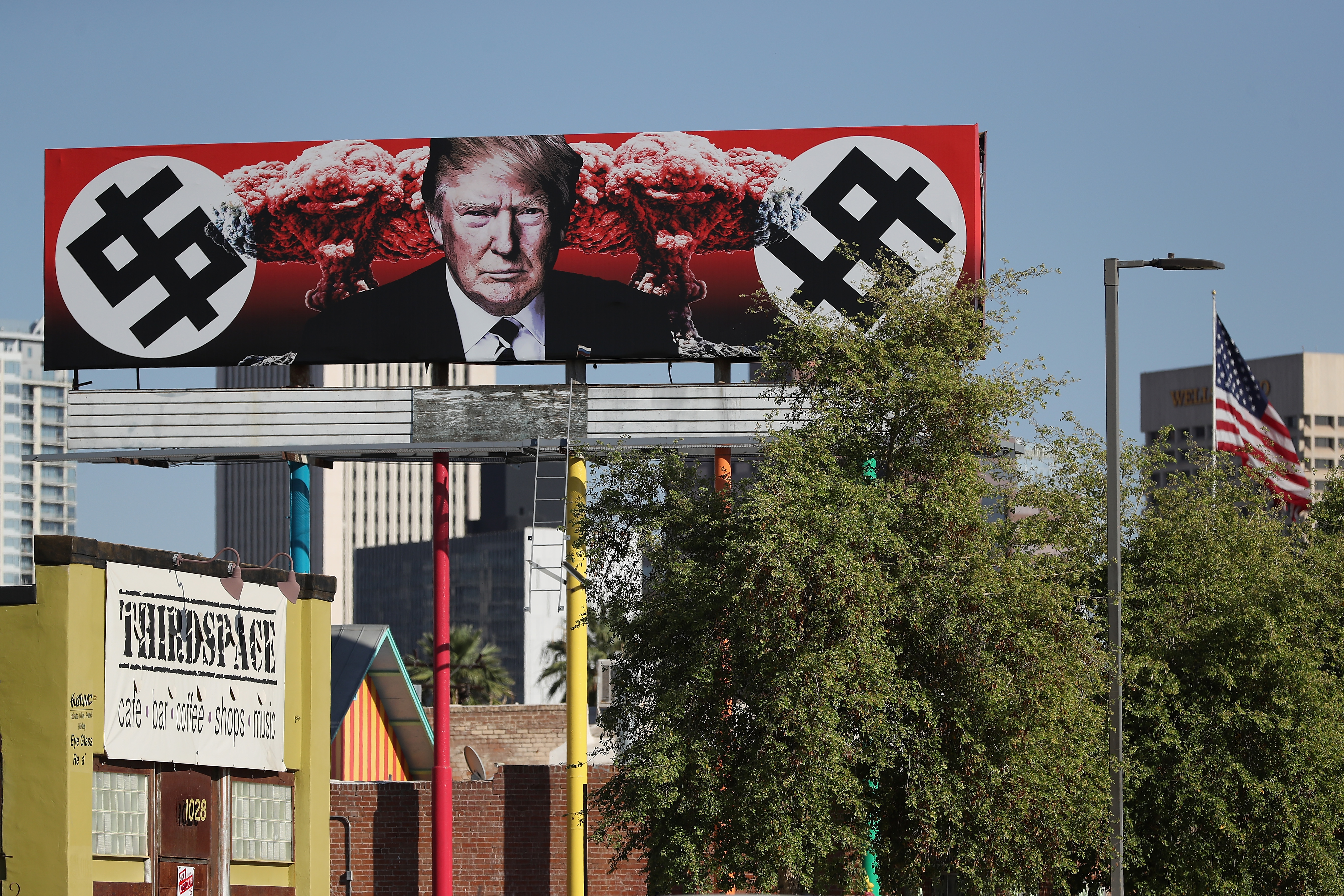 However, not everyone was impressed with the new addition with some branding the poster "a disgrace" and even calling upon Governor of Arizona Doug Ducey to take it down.

"This makes me sad for our great state. Not acceptable for any party affiliation. What are we teaching our youth?" one woman replied over Twitter.

"That’s a disgrace and Doug Ducey should make sure that comes down," another urged.

"If this had been done to any other person the world would be screaming bloody murder," one man noted as another replied: "I'm no Trump fan, but come on- that's absolutely insane."

Others called on those who put the poster up to be prosecuted as some described the act as "a hate crime".

In May this year, a "Trump Death Clock" was beamed onto an enormous Times Square billboard to show US coronavirus deaths in real-time.

The enormous ticking tracker was brought to NYC on May 8 and the 56-foot LED screen kept a running count of the lives lost "unnecessarily" during the COVID-19 pandemic.

And in October, a Democratic group defaced a huge Donald Trump billboard in Texas so that it read "Take Trump to Prison."

Turn Texas Blue admitted that they had "fixed" the enormous Trump poster after a tweet about it went viral.

Ivanka Trump was also targeted by an enormous anti-Trump billboard in Times Square, showing the presidents daughter beaming and gesturing towards coronavirus death tolls for New Yorkers and Americans.