A woman was caught on camera attacking a police officer as he tried to apprehend a suspect while dozens of people simply stood by and watched.

The footage was captured by one of the onlookers in a park in London.

In the video, the male police officer has apprehended a man, who is sitting on a bench, and is attempting to secure the suspect’s arms behind his back.

But as the clip continues, a woman wearing a purple top begins to interfere and grabs at the officer’s arm in an attempt to get him to let go of the apprehended man.

There is a hubbub of noise in the background as the woman shouts at the officer and the man behind the camera repeatedly calls out: ‘Officer, what has he done?’

The cameraman walks closer to the conflict and begins to ask the suspect directly about what he has done. 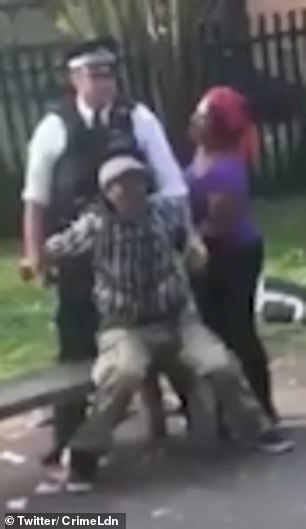 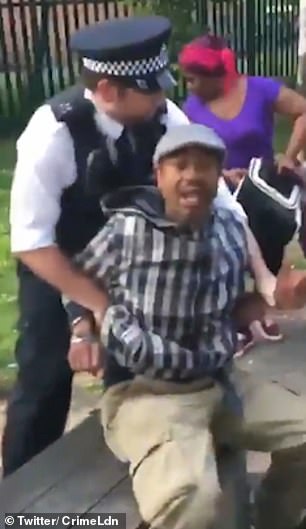 The footage was captured by one of the onlookers in a park in London as a male police officer apprehends a suspect. He attempts to secure the suspect’s arms behind his back as a woman in a purple to begins to interfere

The suspect repeatedly replies saying ‘nothing’ before suddenly getting to his feet.

The man pushes all his weight forward away from the bench and the officer follows him still with a tight grip on his wrists before the pair then both stumble to the ground.

The police officer attempts to put his weight on the man to restrain him but the woman who had previously grabbed at him then begins to straddle him.

She puts both hands around his neck, which knocks his hat off, and pushes him further to the ground.

The crowd that has gathered to watch can be heard laughing in the background and goading all three of the participants.

The officer pulls out his handcuffs but gets overpowered by the two suspects. 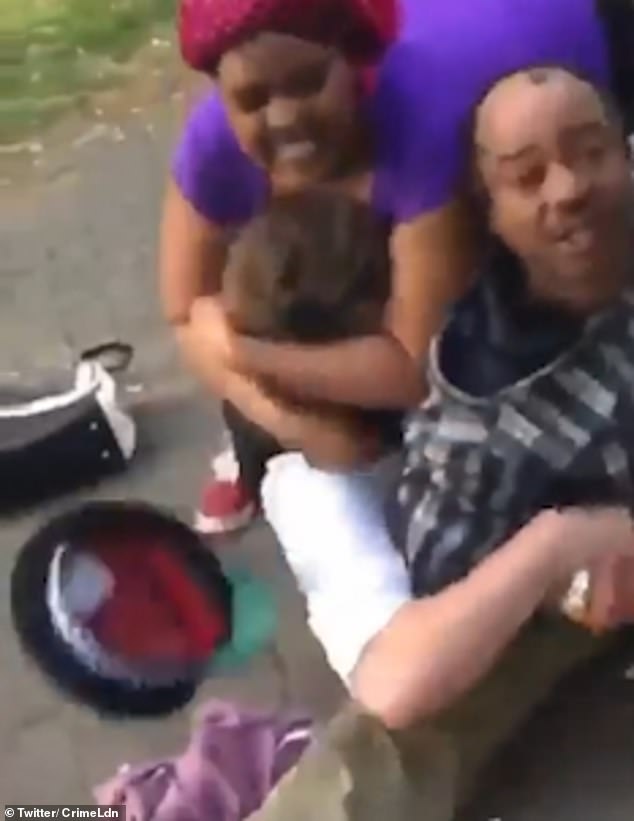 The struggle escalates as both the male suspect and police officer stumble to the ground. The woman then straddles the officer before putting her arms around his neck before knocking his hat off 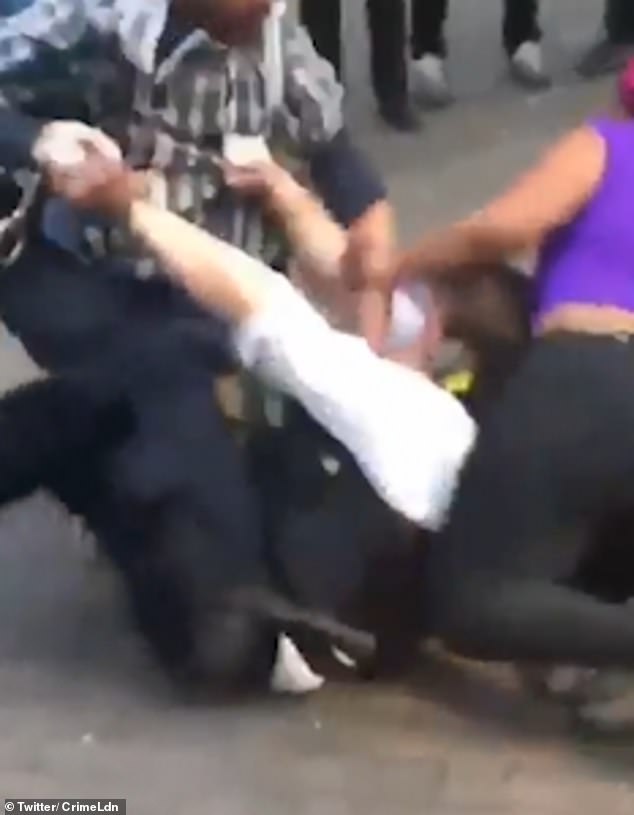 The cameraman excitedly shouts: ‘Oi officer, where is your training at?’

Eventually, the officer manages to regain control of the situation and gets to his feet.

He appears to have suffered a small wound to his face and has his baton raised over his shoulder to deter further conflict.

As the cameraman pans round, it becomes clear that around a dozen people, including teenagers who appear to be in school uniform, have been watching the drama.

The man behind the camera says ‘the fed got banged,’ as the officer radios for backup, which is where the video ends. 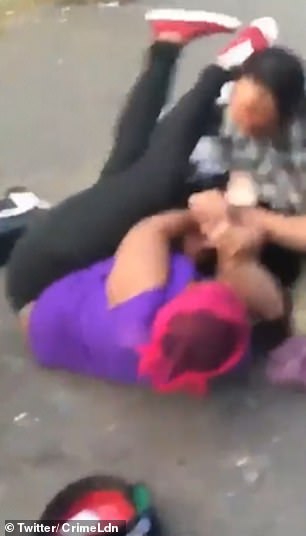 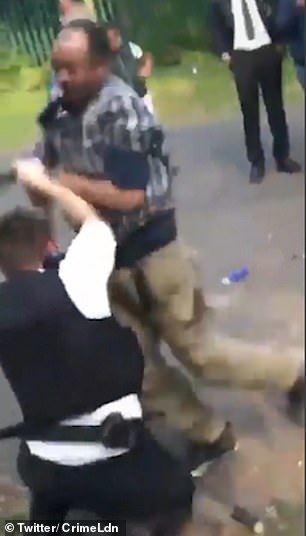 One of the onlookers shouts: ‘Oi officer, where is your training at?’ and eventually he manages to regain control of the situation and gets to his feet

The clip was originally shared on Twitter by @CrimeLdn and was met with fury by other social media users.

One wrote: ‘Disgusting! That man did not go to work to be assaulted and filmed.

‘He was doing his duty! What saddens me is the total lack of respect.

‘Why is he patrolling on his own? They should have all been arrested for public order offences.’ 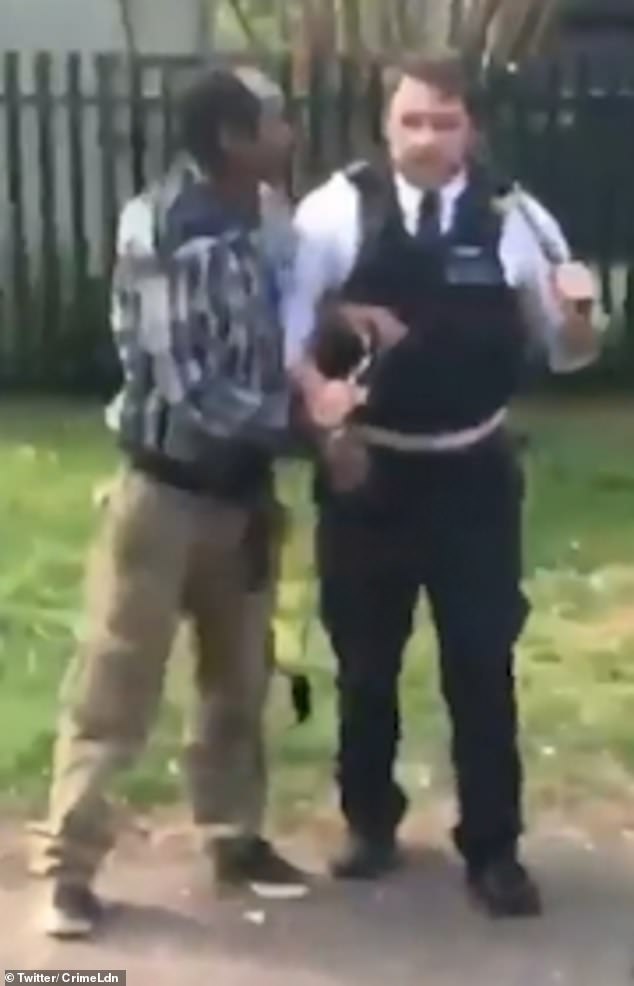 The man behind the camera says ‘the fed got banged,’ as the officer radios for backup, which is where the video ends

Another said: ‘Shameful that those present didn’t help. The very same bystanders who receive and demand help.

‘It makes me ashamed of who we’re turning out to be.’