The London stock market fell to a 13-month low today as coronavirus fears continue to grip investors with shares also slumping across Asia.

The FTSE 100 index of the UK’s biggest listed companies has now fallen more than 7 per cent in the past four days, and fell 2.6 per cent in early trading on Thursday.

The losses mirrored earlier slumps in Asia with Japan’s Nikkei 225 index falling 2.1 per cent and the Kospi in South Korea, where 334 new cases of the virus were reported, dropped one per cent.

Hong Kong’s Hang Seng and the Australian S&P ASX/200both both lost 0.8 per cent.

The losses continue a dire week on the global markets with US stocks suffering the worst two-day losing streak in two years on Monday and Tuesday.

Companies around the world are reporting how the outbreak is hitting profits and trading.

Aston Martin warned that Chinese customers are falling, while Asian-focused bank Standard Chartered warned the economy in the region was taking a hit and Microsoft said computer sales were suffering.

Apple has also been hit by the outbreak as most of its production is carried out in China. 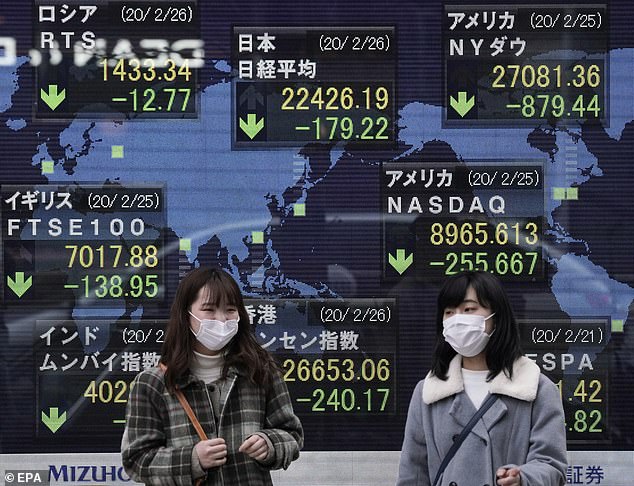 But on the markets, it was airlines and holiday firms that were hardest hit, with shares in Tui, easyJet and British Airways owner IAG all down heavily.

EasyJet has suffered harder than most, with shares collapsing 26% in a week, as holidaymakers postpone trips and businesses reduce travelling.

Some traders had expected stock markets needed a ‘correction’ because they had been trading at record levels in recent months. But some were questioning whether this was more than a correction.

Ipek Ozkardeskaya, of Swissquote bank, said: ‘The slide we are seeing right now is not the correction of the recent stock rally, but the market’s understanding that the coronavirus outbreak would translate into significantly lower earnings and an anaemic global growth.

‘If we add the fact that the crisis has only started outside China into the mix, there is a meaningful shift in stock valuations.’

There was some good news for businesses, however, as Reckitt Benckiser revealed sales of cleaning and hygiene products have increased.

Hopes were dashed on Wednesday when stock markets in the US rose in the morning, but as the day progressed they fell, with traders unimpressed with an intervention from Donald Trump.

Companies hate uncertainty, and with China accounting for 20% of the world’s manufacturing, along with high-spending middle-classes not travelling, businesses are starting to assess the impact of any long-term outbreak.

In Europe the FTSE 100 Index in London slipped below 7,000 at one point on Wednesday before improving and closing up 0.35 per cent.

It said the virus outbreak – which has now spread to every continent except Antarctica – would have a short-term impact on business activity after growth fell to its slowest in a decade last year.

The Bank of Korea kept its key policy rate unchanged, at its current record low 1.25 per cent.

The Shanghai Composite index rose 0.2 per cent while shares fell in Taiwan and most of Southeast Asia. Thailand’s benchmark rose 0.4 per cent after tumbling 5.1 per cent on Wednesday following reports of newly discovered virus cases.

The losses in Asia came after US President Donald Trump told reporters late on Wednesday that he was open to spending ‘whatever’s appropriate’ to fight the virus, after the Senate Democratic Leader Chuck Schumer of New York suggested 8.5 billion dollars instead of the requested 2.5 billion dollars.

He put Vice President Mike Pence in charge of the effort.

And shortly after Mr Trump spoke, the government announced that another person in the US was infected – someone in California who appears not to have the usual risk factors of having travelled abroad or being exposed to another patient.

Major US stock indexes gave up early gains, closing mostly lower on Wednesday and extending the market’s heavy losses for the week.

‘Previous crisis playbooks have all revolved around buying the dip in equities, so I wonder just how much further the fire sale will go before the market at least starts to scale in again,’ Stephen Innes of AxiCorp said in a report.

‘But based on last night’s price action, it does appear that any bounce in stocks is likely to be short-lived. And eventually, the markets could fall deeper as investors start to think what’s the point of trying to pick the bottom in the short term.’

The future contracts for both the Dow Jones Industrial Average and the S&P 500 were down 1.5 per cent.

Other companies that depend on travellers also declined. Expedia lost 7.1 per cent.

Technology stocks eked out a modest gain. The tech sector was among the worst hit by sell-offs this week as many of the companies rely on global sales and supply chains that could be stifled by the spreading outbreak. Microsoft rose 1.2 per cent and Adobe rose 1 per cent.

Investors have been moving more money from stocks into bonds in the wake of the outbreak. Traders are concerned the global economy could slow down as the world’s second-largest economy struggles to contain the outbreak.

The inversion in the yield between the 10-year and the three-month Treasurys is a red flag for investors because it has preceded the last seven recessions.